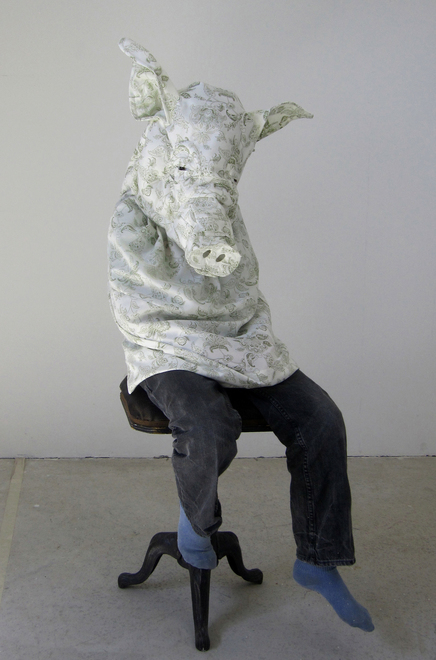 Female Artists and the Museum: Visibility, Iconography, and Legacy

New Mexico enjoys—or sometimes suffers from—a number of artworld stereotypes and iconic images. This is a good thing, as it draws many people to this very special, out-of-the way place. But images of western landscapes and traditional Native American pottery looms so large in popular consciousness, that the whole other-world of contemporary artists working in Santa Fe, and the Southwest in general, can be overshadowed or obscured completely. This is not at all to diminish the value of these more traditional arts, but only to say that Santa Fe, as is generally true of communities in the West that are less well-tread, has historically been an incubator for a wide variety of artists, and continues to inspire and foster experimentation.

One of the greatest iconic images Santa Fe lays claim to is that of Georgia O’Keeffe, and it was on the occasion of planning the concurrent exhibition O’Keeffe in Process (also at the New Mexico Museum of Art, September 11, 2015 - January 17, 2016) that Head of Curatorial Affairs Merry Scully began thinking about the many other women artists in the Museum’s collections, who did not, or have not, become art-history-pop-culture-crossover rockstars like O’Keeffe. “I started thinking about it when I was working on a Judy Chicago exhibition, and I knew we were going to be having this Georgia O’Keeffe exhibition. I was thinking about these big names, and I started to think about all of these other works we have in the collection by significant women artists,” Scully said about the exhibition’s inception. “Also, when MaLin Wilson-Powell was curating a show about the first ten years of the Museum, she found that half of the works shown were by women, but the museum didn’t collect that work…. The thing that interests me is the legacy of women artists. If the Museum was exhibiting women artists at the beginning of the century when it first opened, why weren’t they added to the collection? And does not adding them to the collection create part of their lack of visibility?”

The exhibition that came out of these initial questions seeks to draw awareness to the ways that women artists have found ways to make a show work irrespective of institutional or popular support, and the uniquely feminine perspective or female voice that characterizes that work. Looking Forward, Looking Back looks back to address the lineage of women artists in the Museum collection by exhibiting works by Eleanor Antin, Judith Francisca Baca, Louise Bourgeois, Eva Hesse, Nancy Wilson Kitchel, Sheila Levrant de Bretteville, Ana Mendieta, Faith Ringgold, Jaune Quick-to-See Smith, Pat Steir, May Stevens, and Beatrice Wood, and looks forward through its presentation of installations by three contemporary artists: Ligia Bouton, Angela Ellsworth, Micol Hebron.

While some of the works in the show do express Feminist perspectives and interests, according to Scully, "This exhibition is about this idea of female voice and how each of these older works by women that has a female perspective has informed these contemporary projects. I think everything in the show has a female perspective, whether it’s a Feminist perspective or not.” In the work of Bouton, Ellsworth, and Hebron, issues around power, visibility, identity, and agency are explored across three bodies of work that engage or have created their own unique iconographies. 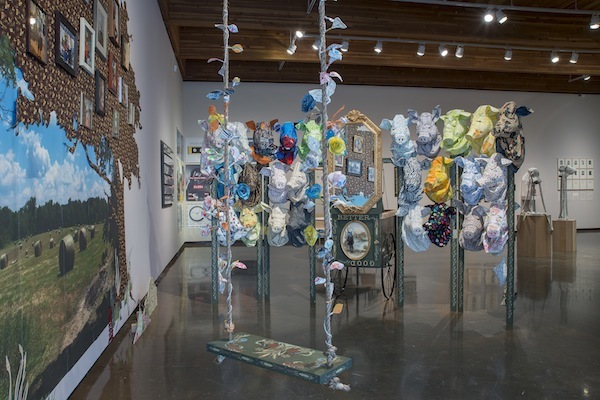 Ligia Bouton draws on narrative and allegory in Understudy for Animal Farm (2012 - 2014). Inspired by George Orwell's novel which used allegory to criticize the Russian Revolution of 1917 and Stalinism, Bouton appropriates this allegory and reverses it, asking viewers to pose as “understudies” for the pigs who pose as humans in the satire. At first glance, the installation looks like a whimsical storybook setting. A pastoral farmland serves as a backdrop to twenty-six pig face masks, hand-sewn out of patterned pillowcases and displayed alongside a hand-painted wooden cart and mirror. During certain artist-orchestrated events, viewers are asked to select a mask and wear it to have their portrait taken. Finally, the participants are given a code to view and release their photographs onto the project’s website, though once the image is up, it is no longer private.

In a reversal from the pigs in the story who take over roles of power, participants are made to be vulnerable in the space of the installation. Unable to see (the presence of the mirror feels like a playful/wicked trick), participants hand power over to the artist as she guides them, places them, and takes their portraits. While some people are simply excited to pick out a mask—there is a Star Wars pillowcase, a leopard print one, some in elegant stripes—Bouton says that many viewers pick up on the more insidious implications at work:

I think the pillowcase itself is a very strong image. In addition to tying the political to the domestic in this context, it has also been used—particularly in American history—to think about and to illustrate power. I think about Abu Ghraib, and I think about the Ku Klux Klan and the homemade nature of some of those garments, and I don’t think it could ever have been an innocent action on my part to put a pillowcase on anybody’s head in a public space.

The installation layers the languages of Animal Farm, bedsheets, and historical narrative to address concepts of power on both political and personal levels, as well as the loss of identity and agency through the motif of the mask. 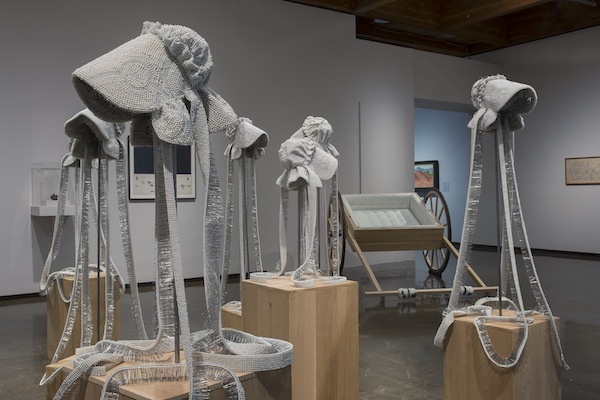 Angela Ellsworth’s work also makes use of traditionally feminine materials in Seer Bonnets: A Continuing Offense (2009-2010) and Leaving Loves Company (2011). In Seer Bonnets, nine bonnets, each bearing thousands of pearl-tipped corsage pins, represent the nine wives of Lorenzo Snow, an early prophet of the Church of Latter-Day Saints, and Ellsworth’s great-great-grandfather. Modeled after 19th century sunbonnets worn by western-bound Mormon pioneers, each bonnet is covered in pearls, and the interiors are uncomfortably, if not somewhat threateningly, lined with pins. The pins in turn invoke associations with rites of passage: dances, weddings, funerals. From afar they look uniform, precious yet stiff, but each is detailed with a subtle, unique circular pattern. These circular symbols hearken to the “seer stones” used by Joseph Smith to “translate” the Book of Mormon and receive revelations from God. Ellsworth said in an interview, “I see it as imbuing these circles with the possibility that the women who would have worn them could have their own visions and revelations,” effectively appropriating this mystical, iconographic element to give these women potential for voice and power. “When I talk about this family of wives, I really see them as having a lot more power than the patriarchal figure who might be calling the shots, and I see the possibility of their voice, of realizing that as a group there is incredible strength.”

Hovering together and adorned with long, pinned straps that drape and seem to unravel, the effect is somewhat like a memorial or a monument of effigies. Nearby is something like their chariot: Leaving Loves Company is a wooden hand cart, modeled on the hand-drawn carts used during the Mormon western migration. In this case, the cart has been literally drawn with graphite to create wood grain, as well as outfitted with a white leather interior, and rabbit fur handles. Seemingly too lovely to use, the cart suggests both place and mobility simultaneously. While the work clearly acknowledges Ellsworth’s personal history of being raised in a Mormon family, but also distances herself from it. She says of Looking Forward, “Where it glues together, for me, is around exploring non-heteronormative notions of family, so I like to think of this idea of polygamy as a construct that is not one woman-one man, but is one man-many women, in relation to a community of women, and in relation to my contemporary queer experience.” 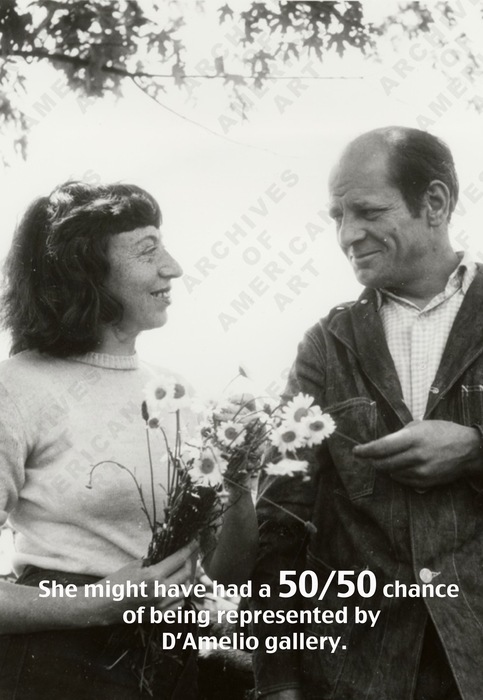 Micol Hebron’s Gallery Tally (2013-ongoing) project makes use of social media and appropriates the communicative efficiency of posters to make visible the gender biases of art world representation of women artists—whether in commercial galleries, museums, advertisements, or auction results. The artist began the project by first tallying men and women artists with full page ads in Artforum in the fall of 2013. Then, drawing on the lineage of the Guerilla Girl’s 1986 Report Card, Hebron began crowdsourcing posters by putting a call out via social media for artists to take their own tallies of commercial galleries and design posters around their findings. The resulting posters can be seen on the Gallery Tally tumblr. Crowdsourcing and poster art especially serve the project, making it fundamentally inclusive, tapping into the visual language of advertising and design—as is seen in Siobhan Hebron’s appropriation of a 1950s advertising aesthetic in 2014 Whitney Houston Biennial.

While a lot of talk and frequently shifting numbers and percentages get thrown around regarding representational imbalances in the art world, these posters take these abstracted or out-of-sight biases and make them concrete. Created on an ongoing basis by artists living in various places, the posters also represent a growing consciousness around this issue and a demand for increased awareness. Moreover, as more of these posters accumulate, they make the broader statistical trends undeniably clear: the average finding at this time is about 70% male to 30% female representation in galleries.

The Gallery Tally project brings the viewer full circle in thinking about the collection practices of museums: institutional support is certainly a vital factor in maintaining the legacy and visibility of female artists, yet it does not effect them building their own iconographies independently. While the exhibition is comprised of 100% women, a poster by artist Annette Abundantia recently uploaded to the Gallery Tally project blog indicates that the New Mexico Museum of Art collected 221 works from 2010 to 2015, 67 of which were female. That’s just 30%. Ultimately, as seen in several of the older pieces in the collection—such as Eleanor Antin’s Fluxus-inspired mail art, 100 Boots Marching (1971-73)—and more recently with the use of social media and crowdsourcing, artists have and continue to push this dialogue around representation and power from outside of institutional outlets. The three bodies of contemporary work in Looking Forward Looking Back explore widely varying themes and engage distinct methodologies, however each addresses at their core issues of visibility, agency and iconography across our current political, domestic and commercial spheres.