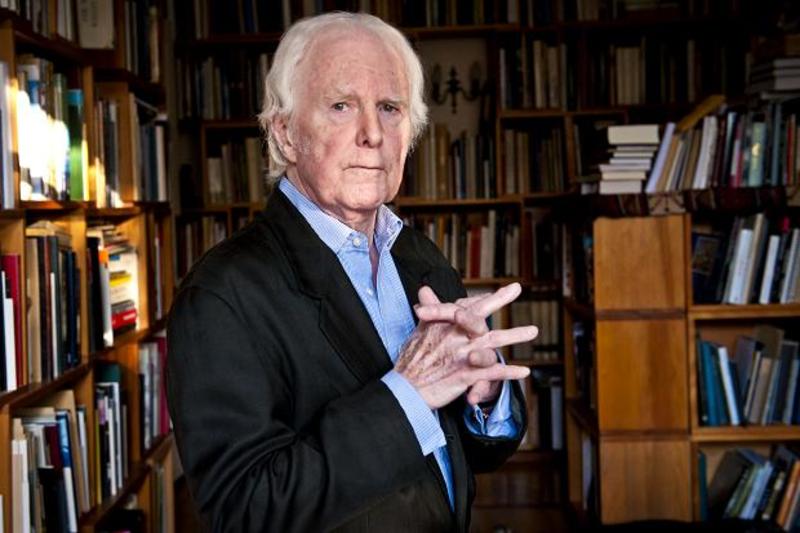 Brian Sewell: The Art of Pissing People Off, and Not Giving a Damn

Words like controversial and outspoken are the first ones you meet in conjunction with Brian Sewell. Dig a little deeper and you come across other words, words like scurrilous, bitchy, contemptuous, acerbic, disdainful, and just plain rude. For those who don’t know, he was also perhaps Britain’s most popular art critic, and he passed away last week, aged 84.

I disliked Sewell’s writing for a number of reasons, that represent everything I dislike about art critics in general: he was patriarchal, reactionary, dictatorial, and sometimes willfully offensive. His views on women, for example, were disgraceful. [Feminists plug your ears]

“There has never been a first-rank woman artist. Only men are capable of aesthetic greatness. Women make up 50% or more of classes at art school. Yet they fade away in their late 20s or 30s. Maybe it’s something to do with bearing children.”

He once claimed that “Banksy should be have been put down at birth”—a bit strong for a producer of socially conscious, public art work—and that Tracey Emin was a "self-regarding exhibitionist" who was "ignorant, inarticulate, talentless, loutish, and now very rich" (yes Brian, but what about the work?), and throughout his career he was famed for throwing similar comment in the direction of those of whom he didn’t approve—at one point prompting 35 artists and art people, including Eduardo Paolozzi and Rachel Whiteread, to write an open letter to his employer accusing him of a “dire mix of sexual and class hypocrisy, intellectual posturing and artistic prejudice” and demanding his resignation.

It didn’t happen. He was incredibly popular and widely read, a fact that attests to the lasting appeal of well-directed bile, and perhaps also the British public’s innate respect for an accent so aristocratic, replete with obscure and archaic words and constructions, that it is almost incomprehensible (he was a man who referred to a hotel as “an ‘otel”—he was too well spoken to aspirate). Sewell once described himself as sounding like an "Edwardian lesbian," and while this might be beyond anyone’s ability to testify, it does demonstrate a sense of humor.

The path that lead Sewell to art critic is complicated.

He was a boy from an "uncertain" background (there have been hints of prostitution) with a father who "married down" and then committed suicide, aged 36, seven months before Brian was born—a fact Brian only learned at his mother's death bed. “[Brian] didn’t attend school until the age of eleven. It didn’t occur to anyone, he says, to send him.” Then he went straight into the English public school system. Unsurprisingly, he hated it, but still got offered a spot at Oxford, which he turned down to study at the Courtauld under Anthony Blunt. Afterwards, he tried his hand as a painter, and failed (cliché fulfilled). There’s something a little horrifying about watching his telling of how he once sold a painting in a gallery and once won a prize for another (and not a school prize, mind).

Brian then spent ten years valuing art for Christies, before becoming rather a failure as a dealer. It was to his good fortune that his former tutor and good friend Anthony Blunt turned out to be a member of the Cambridge five, a group of Soviet spies. Blunt had turned for MI5 and as a result had never been prosecuted, but when the news was later revealed by Margret Thatcher, he was hunted by the press. Brian hid him. And by all (and unverified) accounts, somewhat stole the limelight. It was then that Tina Brown, the reviver of Tatler, hired him as her art critic. The history continues to the Evening Standard, and awards, to television and more awards, and then, less success. He was haughty, scathing and opinionated, offending sentiments and ravishing Michelangelo. His particular bête noire was conceptual art. He once claimed anyone who hung a Hirst in their house no doubt owned a pink Rolls-Royce, (this coming from a man who owned a gold Mercedes).

Like most people with a thousand sharp points, Sewell’s redeeming feature was that, as mentioned, he was funny, example—when Tony Blair asked the people to trust the government over the Iraq war Sewell’s response was “Trust them? I would sooner trust ferrets to feed a pet rabbit lettuce.”

Brian was articulate, engaging, charming, knowledgeable, and indomitable. He had the courage to be the negative voice, to speak out against the prevailing opinion and not give a damn if he upset people. And the public loved it; the public wanted someone to say those things about those people. A popstar artist best known for making loads of money doing something no one understands, people wanted that and he delivered it with utter belief and authority. He also spoke beautifully about the classics, and ultimately, he was passionate about his subject and unafraid to show it.

We do agree that the Chapman brothers are good, but other than that I disagree with him on almost everything. However, the quotidian truth is that, as offensive he as might have been, society needs distinctive voices who do what his voice did, crystalized opinion, forced people to stand one way or another and define their beliefs, and actually read about art, and as such, he will be sorely missed. In the end the world needs some spite. Sample quote, in Venice, travelling to a masked ball:

“Here I am, filled with bitter resentment, on my way to the bloody ball.”

(Image at the top: Art critic Brian Sewell at his home in London, Francesco Guidicini via The Times)

A Visionary Who Created a World: Celebrating the Life of Noah Davis
9/11/15

The Changing Treasons: It's Time for New York's Leading Critics to Surrender Their Crowns
4/17/15

Why We All Want to Punch Art
12/18/14
COMMENTS (0)
ArtSlant has shutdown. The website is currently running in a view-only mode to allow archiving of the content.