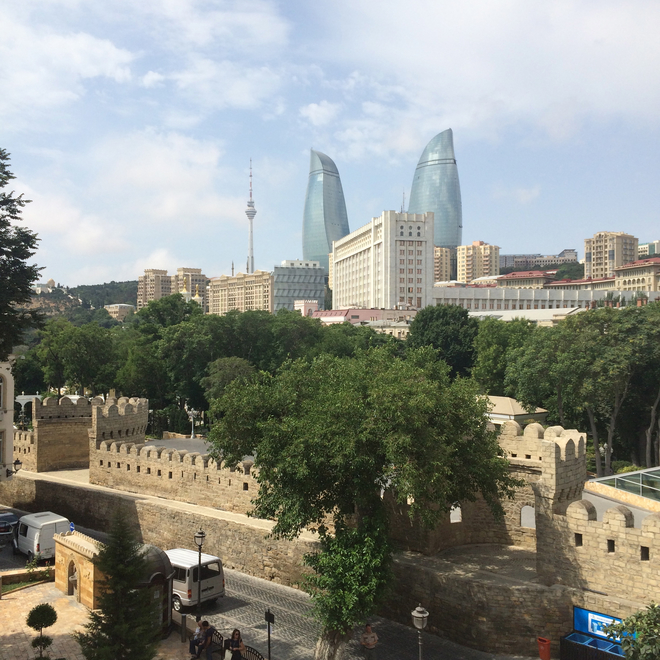 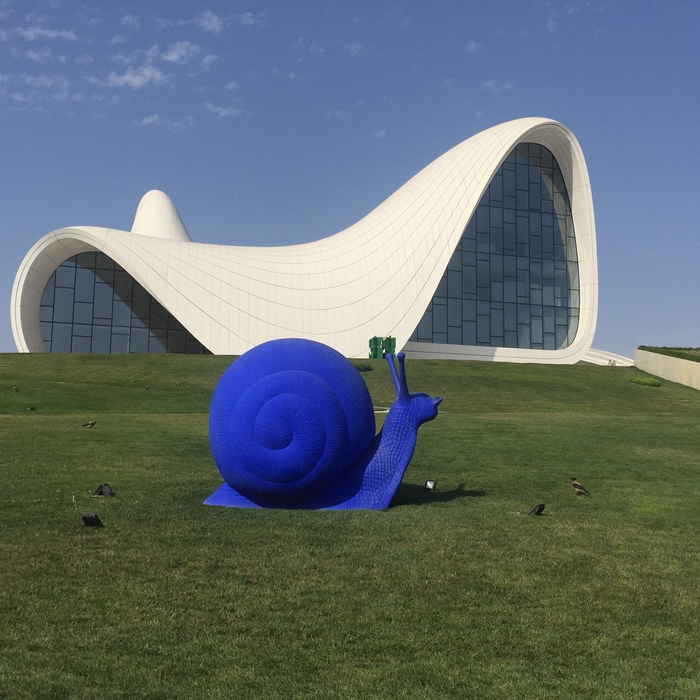 A few minutes’ drive along the Caspian is YARAT Contemporary Art Space, a 2,000-square-meter converted naval facility that opened its doors in 2015 to an audience made up of the who’s who of the art world, with a site-specific solo show by Iranian photographer Shirin Neshat. YARAT translates to “create” in Azerbaijani, and was founded by mixed-media artist Aida Mahmudova, who is the young, visionary, one woman force behind the city’s emerging contemporary art scene, the curator of the Baku Museum of Modern Art, and also the niece of the country’s first lady. With the support of tight-knit cohort of local artists, Mahmudova founded YARAT in 2011 as a platform to launch Azerbaijani contemporary art both inside the country and internationally. 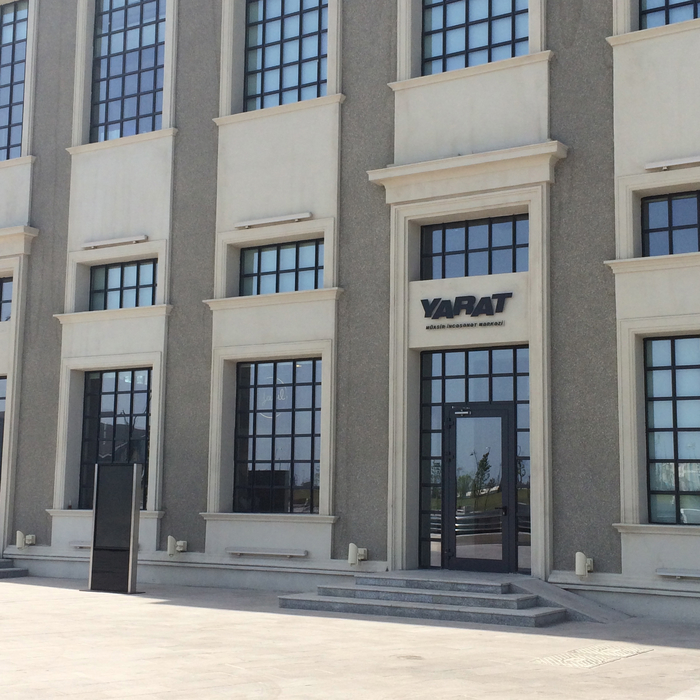 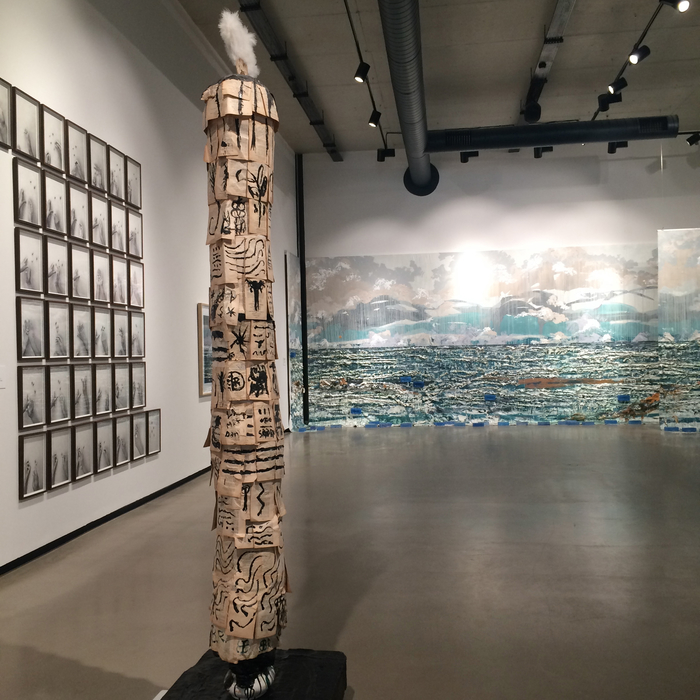 (left) Entrance to the YARAT space is free of charge and open to the public.
(right) Inside the YARAT exhibition space

The space is free to enter and YARAT’s 120+ programs to date—including artist workshops, residencies, lectures, and the popular Public Arts Festival—are also free to all. A hip café complete with vintage piano opened in the space’s lower level over the summer, and flats of live grass mounted on bicycles are parked outside, inviting visitors to physically engage with installations. 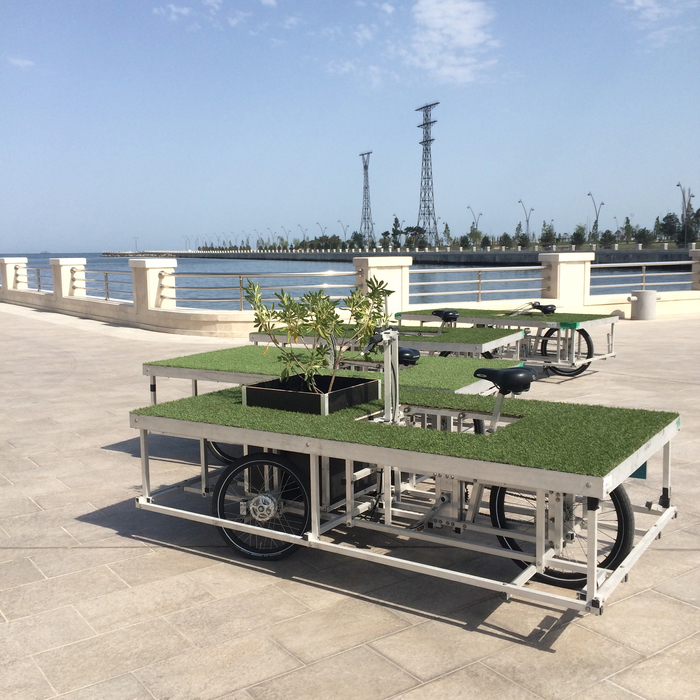 Rideable art installations as part of the YARAT Public Art Festival parked outside the YARAT spaces. 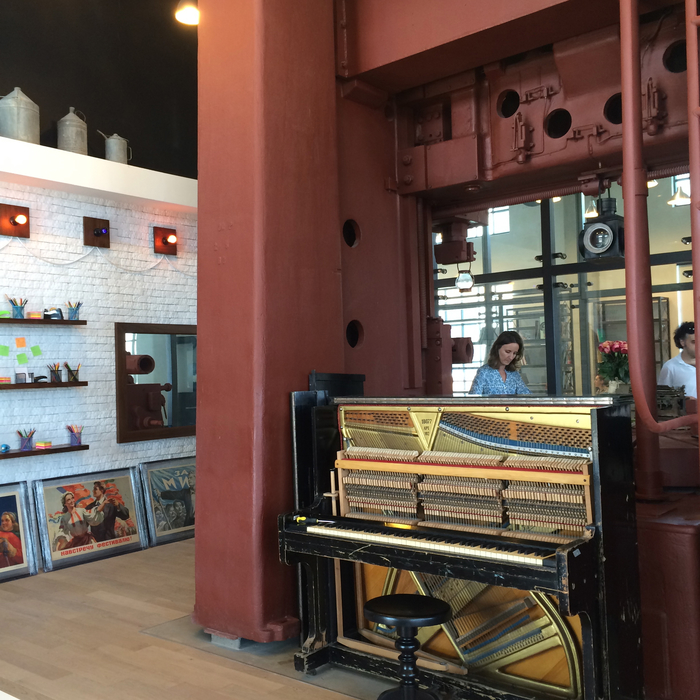 The newly opened cafe at YARAT is positioned to become a meeting place for Baku creatives.

Next door to YARAT, the Aliyev Collection debuted with still fresh paint in time for the summer’s first European Games and is too new to even have a website. Admission is also free, and work from the former president’s modern art collection provides a crash course in regional work from the 20th-21st centuries, including Ogtay Sadiqzade, Togrul Narimanbekov, Altay Sadiqzadeh, and Farhad Khalilov. Intriguingly, for a predominantly Shia Muslim country, the collection includes many nude portraits. As a former USSR country, Azerbaijan has a rich history of modern art, but the Azerbaijan State Academy of Fine Art curriculum is largely shaped by Soviet realist aesthetics with landscapes and portraiture taking center stage. The university curriculum also incorporates nudes, and does not shy away from depicting the figure. 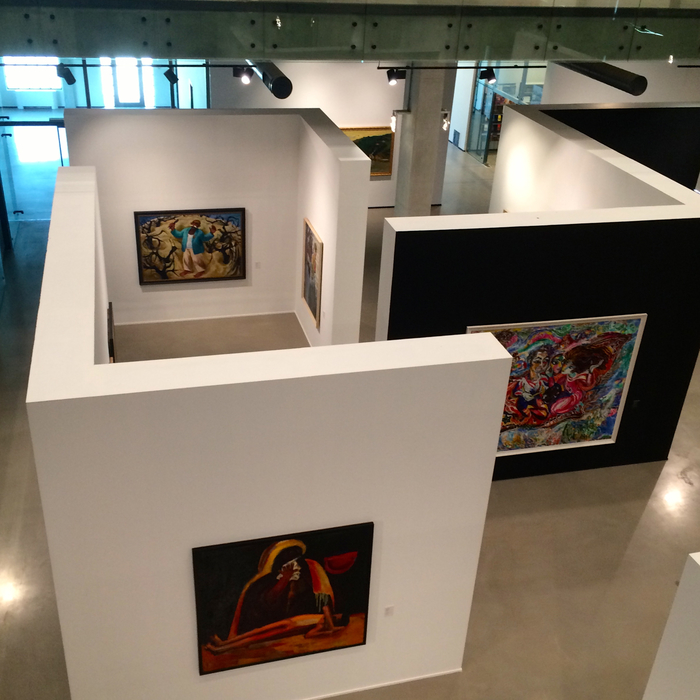 YAY Gallery, the commercial gallery associated with YARAT is nestled in the Old City between ruins of the old public baths and The Museum of the Miniature Book—a quirky collection with a passionate elderly curator who is the proud gatekeeper of hundreds of tiny volumes of literature. A car ride away the gallery hosts a block of artist studios, where Mahmudova and the country’s other rising artists have been given breezy spaces.

Square wooden packing crates typically used to ship works of art are stacked against a wall of Farid Rasulov’s studio. The crates are made from beech wood sourced in Azerbaijan forests. Rough tree stumps stand in wait for their reincarnation on the narrow concrete balcony. After closer inspection it becomes clear that the crates have been carved with ornate geometric designs. Rasulov has spent two years learning traditional woodworking technique from local crafters.

The Baku artists’ work is tied together by a deep pride in collective memory of the country’s past juxtaposed with a sure-footed sprint towards a free-thinking, free-spirited future. At Dogs in the Living Room, his 2014 show at Galerie Rabouan Moussion in Paris, Rasulov’s canines snarled in a corner, the arch of their sleek resin backs in jolting contrast to the Azerbaijani carpets installed floor to ceiling. 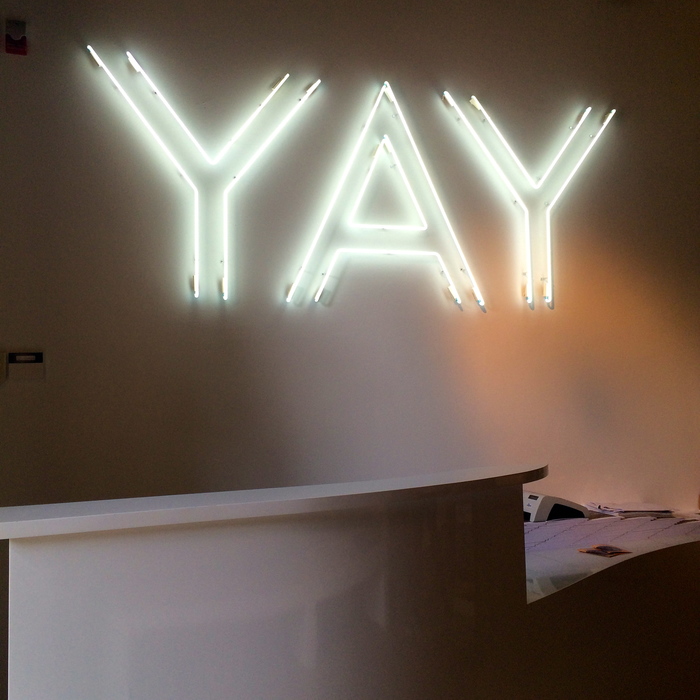 Aida Mahmudova’s paintings grapple with nostalgia and impermanence of the past, with a focus on unassuming buildings and structures that lie forgotten on the city’s periphery, while Faig Ahmed’s deconstructed carpets literally weave together tradition with technology.

While YARAT’s openings are packed, YAY gallery’s booth was hugely successful at last year’s Art Dubai, and art from Azerbaijan is trending among the Middle East’s collectors at the moment, the gallery will have to work hard over the next few years to carve out a strong local collector base that is willing to value contemporary work over modern European portraiture. YARAT is funded in part thanks to corporate support and the next step in forming a stable local market prescribes that large international brands operating in Azerbaijan begin to commission or collection contemporary work.

Artists' Desks
11/4/15
COMMENTS (1)
People with hate in Azerbaijan
I don't believe artists in azerbaijan are artists, they have full of hate against Christian Armenians. Art means not killing but to acceptance of humanity and life other then wishing killing people, plus with no democracy freedom of speech under their despot president Aliev, many journalists still in prison. Art not reflect real life in Azerbaijan, for me is just fake and non sense.
Comment by: ARDEN PORTAKAL on Tuesday 09/29/15 at 6:38 PM
ArtSlant has shutdown. The website is currently running in a view-only mode to allow archiving of the content.