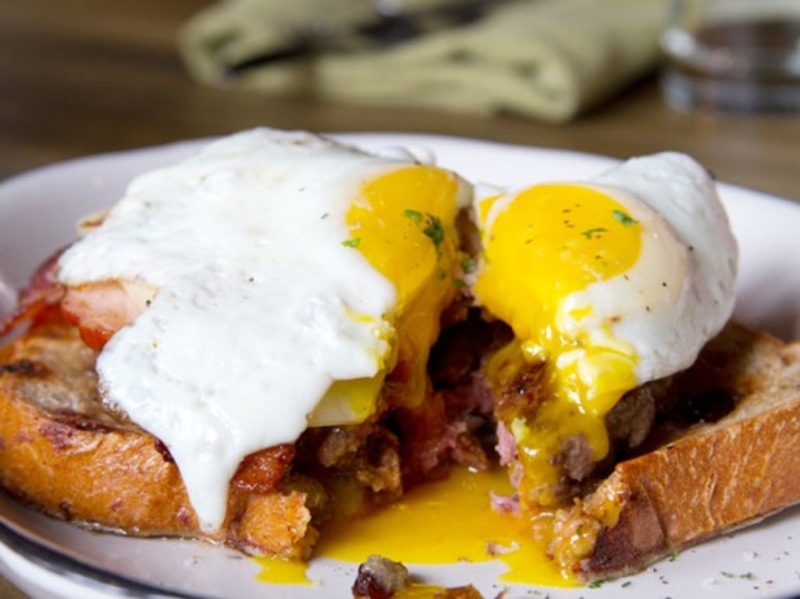 EXPO Weekender: The Best Is Yet to Come

As Chicago's biggest art week builds to a crescendo, many of the best talks and events are still to come over this weekend. EXPO is marking itself out for its genuine interest in connecting what the commercial art fair does with conversations happening in parallel. While many fairs attempt to do this, EXPO has panel discussions with broad, understandable topics that open out to design, fashion, and commerce, reflecting more realistically the complexion of the art world, its influences—and its conflicts.

There are so many things happening inside and tangential to the fair, that we've made a shortlist of the best, organized into suggested plans for your day, from breakfast to passing out.

Kick off your day with brunch (we recommend gorging on the Rich Man Po' Boy sandwich, just to set the decadent mood, at Bottlefork, River North).

What's the most important thing to think about when you visit an art fair? Everyone wants to know how they should collect, and collect better. Feeling fattened on your oysters, head over to the Navy Pier to see "Collecting for the Next Generation" at 11:30. The panel discussion includes Deloitte staff and renowned Art Advisors who will explore their role in collecting. With talk of appraisals, taxes, and finances, this is a pragmatic conversation on how to buy 21st century art.

Bad at Sports, the pioneering critical cultural platform, with their celebrated art podcasts, are broadcasting live from EXPO. At 12:45 pm, you can see "One on Ones": interviews with Laylah Ali, and Nancy Lupo—both artists are currently on show at Kavi Gupta Gallery.

After this, you might want to stop for some lunch—we suggest—then mosey up to the 2nd floor, where you can take part in Alice Berry's performance Reconciliation, at 6018North until 5 pm (also Saturday and Sunday): be sure to sign up before you visit for ten minute therapy sessions on how to reconcile a creative life in a cold, capitalist world.

By 4 pm you'll be ready to sit down again: "Museum Models: The Global Impact of Public Collections" is a panel discussion between chief curators from the Studio Museum, Harlem, The Renaissance Society, and LACMA, who will debate the key question of how art history is presented through institutions and museums: each speaker will shed light on the way their museum navigates this, and how different models for the museum can contribute to the shape of contemporart art globally. 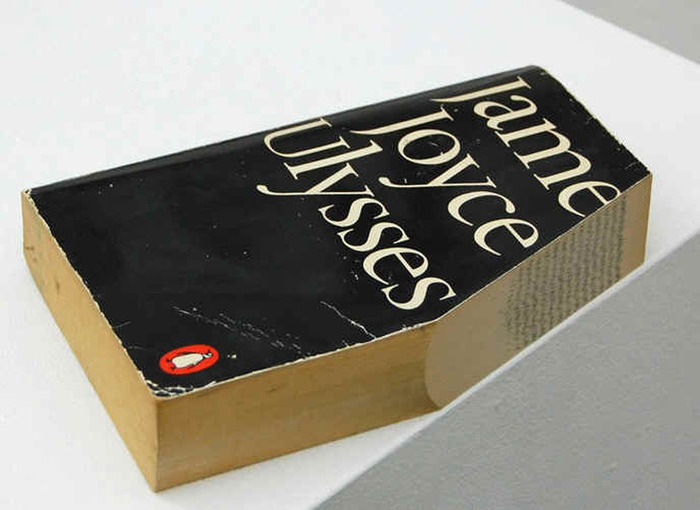 No time to stop: make your way to Harold Washington College's President's Gallery, for "Terrorists in the Library," a speculative research project tracing moments where the material manifestation of knowledge is being unraveled.

Over at SAIC at 6 pm, you could peruse Civilization and Its Discontents, an exhibition of works by the school's most celebrated alumni from the past 30 years.

Round off Friday with Keren Cytter: Show Real Drama at 7.30 pm at the Museum of Contemporary Art Chicago. The third part of a trilogy of interconnected plays written and directed by Cytter, Show Real Drama is based on the life of her often-used actor, Fabian Stumm. Email ahead to reserve tickets!

After brunch (try Cornbread French toast and mimosas at Lula Cafe) a political pulse to start your day at EXPO: Woman Made Gallery's panel at 1 pm, "What Have You Done for Me Lately" is a timely discussion of the issues surrounding sex work. Practitioners and academics will speak on the subject.

Who doesn't love a rainbow? At Natural Resources Defense Council (Booth 104), at 3 pm Doug Fogelson and Alex Wieder talk about the most beloved metereological phenomenon through water activated LED light pieces, navigating the symbolism and special beauty of the rainbow. 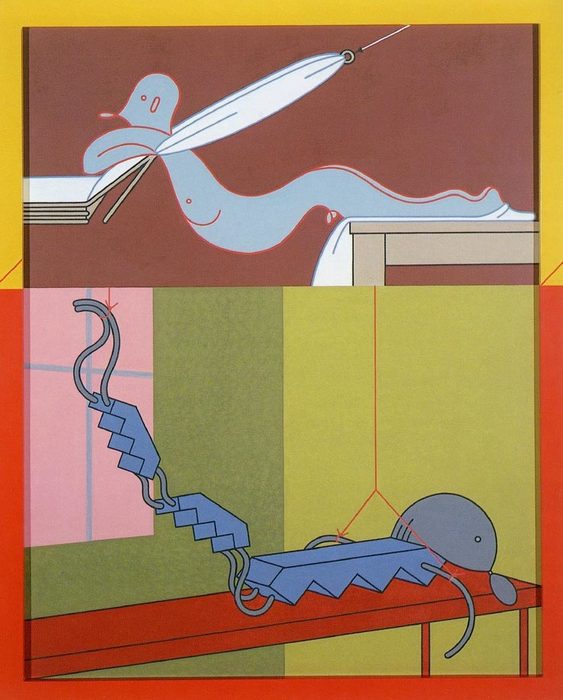 Hairy Who artist Barbara Rossi, Crucifixions by a Thread, 1983, acrylic on masonite with wood frame. Courtesy of the Artist.

From pretty to gritty: you won't want to miss monarchical Hans Ulrich Obrist in conversation with the legendary Hairy Who, the radical 60s artist collective who met at SAIC, now known as the Chicago Imagists. The discussion starts at 4 pm.

Maybe refuel at the Gage, before starting your nocturnal tours. Chrysalis is comprised of two club-themed installations at the Rainbo Club and Subterranean Lounge, from the Chances Dances Retrospective, themed around identity and space: safe and unsafe journeys and the experiences of space from the perspective of queer communitites. The works and performances will be accompanied by artist talks on a party bus on themes of selfhood and space. 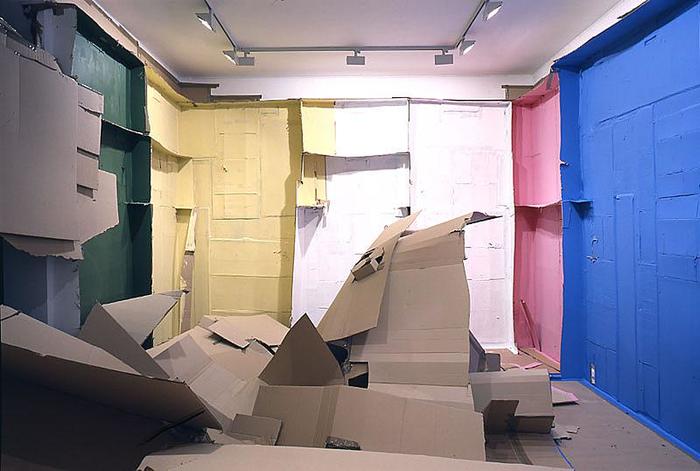 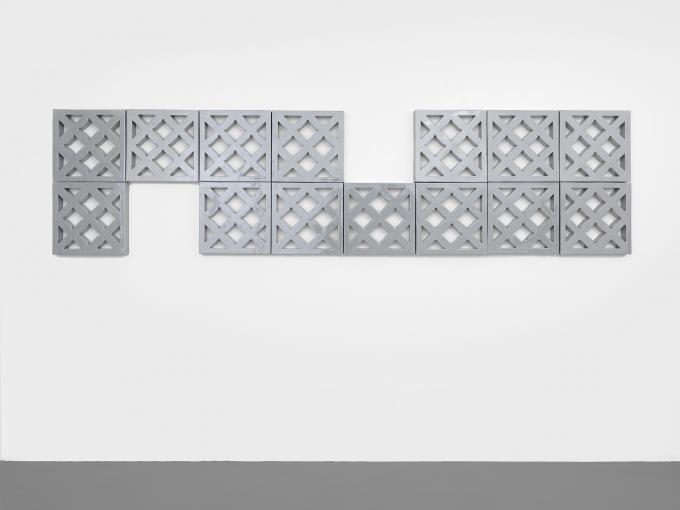 Nurse your hangover in bed, and after brunch overlooking the river at Travelle, you might be sufficiently restored to make it back to the fair site for "Contemporary Ceramics," at 1 pm. How has clay as a medium been transformed in the 21st century? The ongoing high-low dilemma of ceramics now will be addressed directly by the four artist panelists.

With your mind woken gently by the poetics of clay, you could head to Méthode Room Open House, Rebuild Foundation's collaborative residency program that includes an exhibition, television studio, and the launch of a new architectural journal: the aims of curator Xavier Wrona are close to our heart: to move away from static theoretical thinking and get closer to reality through engagement and dynamic activity.

A serene way to end a culture-soaked weekend would be to see the final performance of Millennials, contemporary choreography presented by the Joffrey Ballet, at the Auditorium Theatre.

Image at the top: Chelsea Ross, via chicago.seriouseats.com