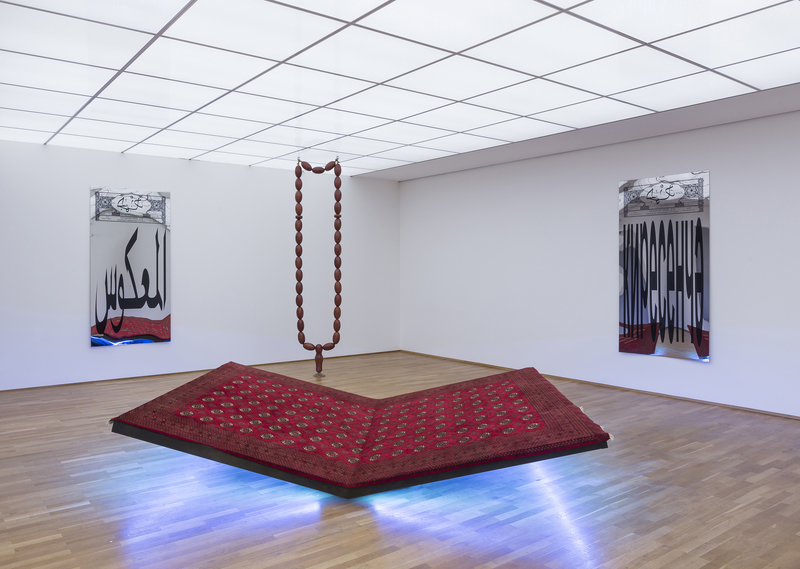 Museum award competitions give artists considerable amount of exposure in the media and tend to catapult the artists’ careers, their market value will increase as a result, making the selection of artists a very politicized issue. 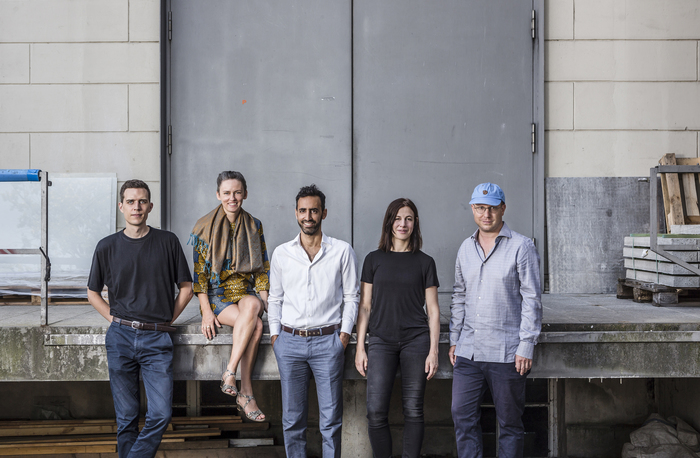 For the Preis der Nationalgalerie the four nominees are: Slavs and Tartars (collective), Anne Imhof, Christian Falsnaes and Florian Hecker. They are all well-known, internationally respected and represent four practices, which are not entirely dominant in the contemporary art scene but arouse curiosity and have gained considerable attention in the last two years. According to a statement, these nominees “are showing works that spread across media and genres more than in any previous competition”. This is true. The release continues: “Their practices clearly mark a change in artistic dealings with materials and ‘the immaterial’.” But I would like to propose another umbrella category, all artists are dealing with forms of mediation.

In all cases we are dealing with forms of mediated experience, a heightened concern with (material or immaterial) forms of mediation. In short a scream for awareness, a desire for a certain kind of consciousness about experience. They all share a desire that is produced in the absence of some kind of experience. They all point to something that is dormant, obscured, and yet possible (inherent and present) in social life.

How salient are these forms, how do they facilitate an understanding of their work’s meaning? What kind of ideas and feelings do the artworks produce? 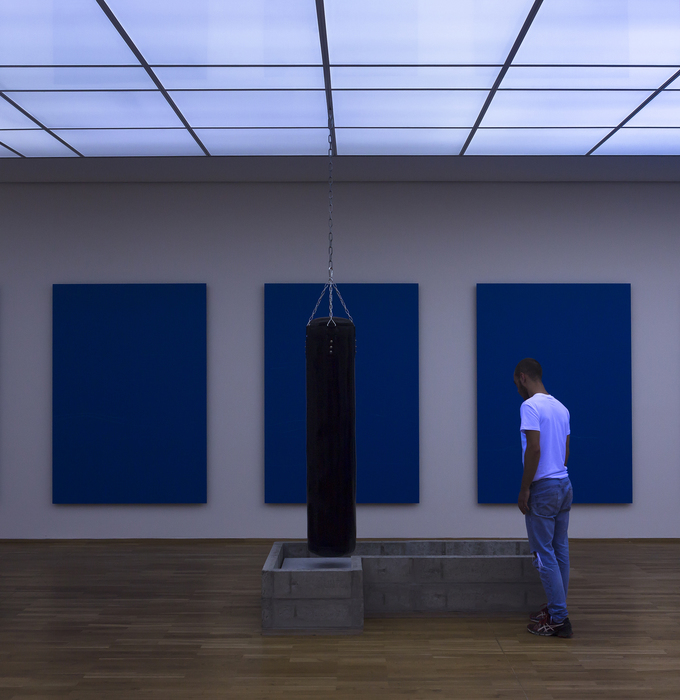 Anne Imhof’s durational performances require a level of submission. Her work is strange and alien, intriguing and dream-like, filled with layered imagery and hypnotic intensity. She choreographs situations that deny participation, and leave our thoughts to wonder.

In Imhof’s room, there is no central point of view and performers appear to be indifferent to our presence. Their body-language is often vague, with occasional interruptions of emotionally charged moments. The “brutalist elements” like the cement tanks filled with buttermilk, and the stench it leaves in the air, enhance the estrangement.

Two pieces are presented in this same room, IDEAL and RAGE, and they vary greatly. In IDEAL it is hard to focus on the performers, whose movements are schizophrenic and illegible, or the half a dozen large turtles that slowly get added to the drama. The performers try to place the turtles on a strait line, but they insist they have somewhere else to be.

In RAGE the movements are more aggressive, and the performers even do some dadaesque, spoken poetry. They ask: what, what, do, you, you, want, want, want, want.

After over an hour in Imhof’s performance-installation room the estrangement is only magnified. The incommensurable layers of meanings that could be derived from the performers movements, actions, and objects in the room, are indigestible. But this uneasiness is neither good nor bad, it just is. 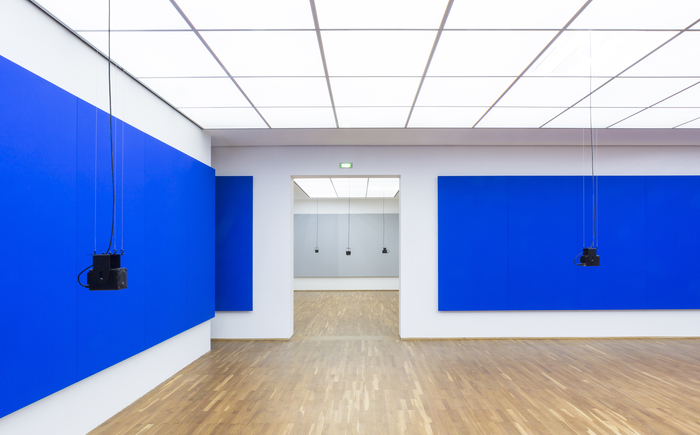 The sound that emanates from Florian Hecker’s intense installation charts familiar territory for those who follow the experimental-meets-ambient music scene. For ears attuned to the scratching, slicing, textural layers, bending synths, atonal beats, and high pitch sounds, the 25-minute long piece might not be groundbreaking in itself. In truth, what is interesting in Hecker is how heavily it is grounded in avant-garde music from the 60s. Another major influence for Hecker is psychoacoustics, a branch of science studying the psychological and physiological responses associated with sound and listening, according to Wikipedia. He is interested in the perception of sound, how listening is a profoundly subjective process, and he does this through synthetically generated, complex and dense compositions.

Formulation, 2015, builds on two recent pieces, A Script for Synthesis, 2013-15, and Reformulation, 2014. The sound is largely indescribable, but imagine it as the sound of aliens speaking. Small square speakers hang from the ceiling, large fabric panels affixed to the walls of each room. The same sound travels from the speakers and moves between the two rooms, which work more like sound chambers. There is a highly orchestrated process behind this work. The minimal elements in the rooms demand careful listening.

Space is a crucial element in Hecker’s pieces; the effect of listening with headphones would not be the same. It is unclear why Hecker needed the combination of absorber and diffuser panels on the walls, but according to a statement, “the ratio of size between the absorbent area and the diffuse area is derived from the acoustic content of the compositional work Formulation.” This might or might not mean that Hecker intends to control the sound spatially with these materials and transform the acoustics of the room/chamber/architecture with specific materials. If that is to be accepted, the piece then is about emphasizing its own immateriality. However, the attempt is to synthesize the immaterial, to make it perceptible and sensuous.

Christian Falsnaes, The Title Is Your Name, 2015

Christian Falsnaes is bold. By the end of the four-minute long video/performance I shared with his tablet I had laughed, danced, felt embarrassed and asked him out for dinner. Never did I expect those things taking place when I walked into a sterile room, with only a chair, a tablet and a desk. Somebody should have warned me those large blue eyes were capable of such powerful persuasion.

Speaking to the artist after sharing this moment of intimacy was a surreal experience. I felt like I had made a new friend, but of course he had no idea who I was. He quickly put into words that he was exploring new ground, and was using the tablet’s video experience to potentially open up avenues for creating intimacy. I, to my own surprise, completely agreed. My version of Your Name is the Title is above.

Falsnaes is a new kind of situationist, aware of new media potential to push performance. The social situations have a raw, disarming, quality to them. Pushing against boundaries of private and public space, of live event versus documentation, artists and audience, intimacy and power.

Falsnaes interest in new media focuses not on perfecting the medium, not on mastery, but on playing, exploring, and transforming its uses. Moving Images, also builds on this idea, but on a larger scale, with many people. What matters to him is what happens, how people react, how a sequence of events can spiral out of control. Performance and video intertwine, but the audience is his medium. The work takes off once the distinction between performers and audience has disappeared. 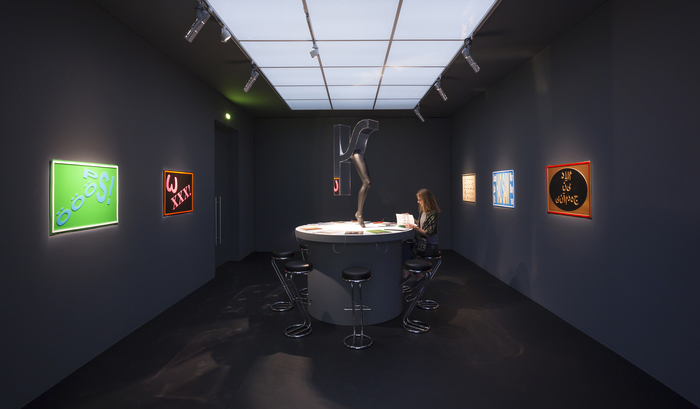 Slavs and Tartars have embarked on a vast and quixotic project. The collective started in 2006 as a reading group dedicated to Eurasia’s geopolitical and imaginative issues. Now through a mixture of research, comparative literature, linguistics, theology, they are elaborating on their profound fascination with philology — a disappearing discipline at least in the West — they work towards upturning certain cultural and linguistic assumptions.

Upon entering their gallery is a large carpet, PrayWay (2012). Bent in the middle with sides raised, and blue neon light emanating from underneath, the carpet looks like it's about to take off. The sculpture-meets-installation can be used for seating, laying, reading or talking. Two giant prayer beads, PraySway (2012), which can be used as swings, reinforces their flirtatious tone.

Their bibliophilia is on full display in the second room of the installation, where a bar with a dummy leg shaped as a cyrillic K is surrounded by books and publications, some authored by Slavs and Tartars. We learn that K letter was used by the Soviets to represent the Arabic letter Qaf during their expansionist missions. Here it is used as part of a sculpture they have called Qit Qat Qa, 2013, a name that alludes to the famous fetish club in Berlin, Kit Kat Club. Other publications, and their special publication for the show, focus on Germany’s relationship with the East and Orientalism.

Special attention is given to another publication called El-Dschihad. Published by the German Foreign Ministry for Muslim POWs at a camp outside Berlin during World War I. In a serendipitous twist, we learn the camp is one of the new sites for Syrian refugees in Berlin.

For a practice largely grounded in research and language they are remarkably undidactic. The ambitious counter-cultural project succeeds where academic disciplines have faltered: to highlight the inconsistencies and contradictions between the politics of language and the language of politics.