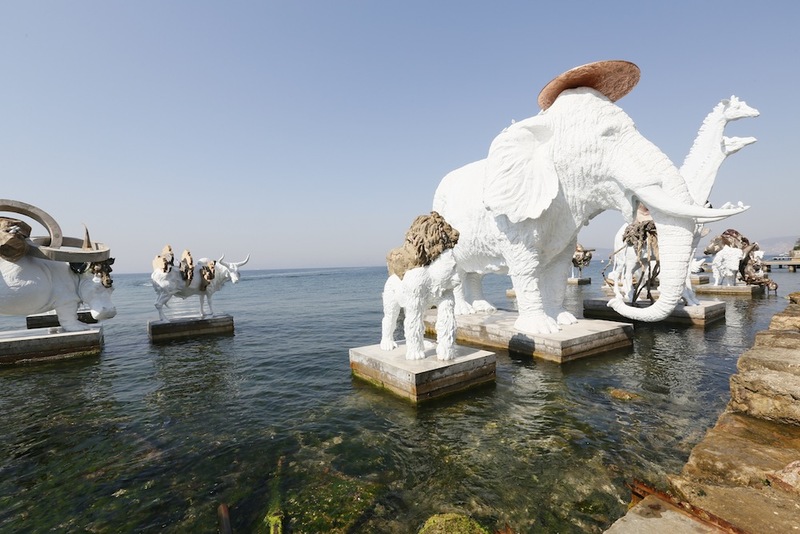 On September 3rd, social media went wild with a distressing image of a dead Syrian boy lying face down in the sand after his tiny body was washed ashore from the saltwater of the Mediterranean Sea. Fleeing from war in Syria, seeking refuge in Europe, the little boy died when one of the boats, carrying six Syrians, sank after leaving Akyarlar, Turkey, in a desperate attempt to cross the sea straight to Kos, Greece. That same day, the 14th Istanbul Biennial, with its theme SALTWATER. A Theory of Thought Forms held its press preview. The exhibition opened with performances by Theaster Gates, Adrián Villar Rojas, and Liam Gillick, accompanied by introductory remarks underscoring the prominence of this biennial in this particular geographic part of the world in this time era that we live in. Watching the news that day, the timing and geography felt perhaps too poignant.

Since they were first established in 1987, Istanbul Biennials have functioned as platforms for global interaction, and with their political stances, they have consistently questioned the cultural discourse of the homogenization and integration of the dominant culture industry. Besides questioning its own role and position in the Euro-American art world, Istanbul Biennials have endeavored to define the center and periphery, while examining the new geographical connotations in the post-cold War world. 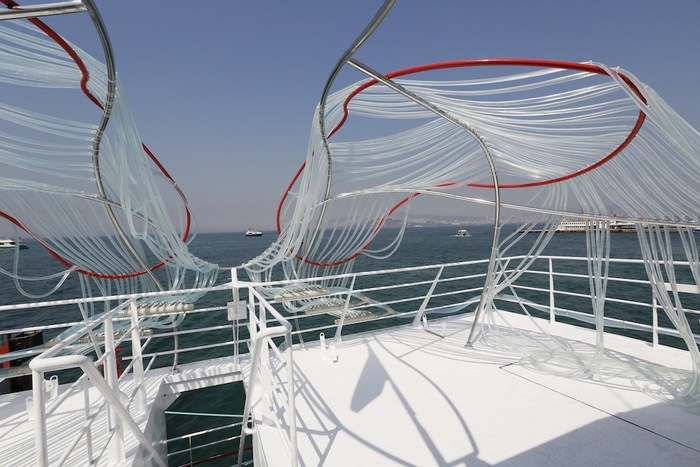 The unique location of this “magical” city, Istanbul, and the political, strategic position of Turkey—the cliché of being a bridge between the East and West—was not emphasized in this year’s biennial, perhaps because it was stressed (or overdone) in the biennials preceding it. Yet, with its multi-layered concept, the 14th Istanbul Biennial too held a position towards the social and political events happening in Turkey and around the world. Carolyn Christov-Bakargiev, who drafted this edition’s framework, focused on the metaphoric concept of “saltwater,” the Bosphorus and its currents going in opposite directions, while at the same time considering the specific history of Istanbul and its main river. Saltwater operates as a symbol for the flow of people around the world, the waves of history and trauma, and the contradictory properties of healing and decomposition.

With the poetic and lyrical meanings of this theme, the exhibition attempts to survey the “knots of history.” As Christov-Bakargiev puts it, the 14th Istanbul Biennial looks at the “wars, ethnic cleansing, political uprisings, the conflicts between Turks, Armenians, Greeks, and Kurds, and more recently a wave of Syrian refugees.” It’s a sadly fitting coincidence that the press covering the tragic death of the Syrian boy overlapped with the opening of the biennial, which included works that aesthetically scrutinize the political and social events past and the present. Once again the Istanbul Biennial intended “to create a dialogue between the work of exploring a traumatized past and the work of transforming history into a fertile terrain for the future, a culture of ‘compost.’”

Christov-Bakargiev prefers to display this “compost” in unusual venues like former homes, stores, and boats, alongside conventional art venues like galleries and museums. Yet, the most unique locale is Büyükada, one of Istanbul’s Prince Islands. To get to that quasi-magical place you must cross the saltwater by taking a boat across the Marmara Sea. Büyükada, formerly called Prinkipo, shelters eight biennial artists across seven venues. One of them is a sea bus—Kaptan Paşa Deniz Otobüsü—which presents works by Marcos Lutyens and Pınar Yoldaş. Lutyens’s installation with felt, elements of a wooden boat, lamps, ropes, stools, plates, recordings, and readings with blind people, is for Christov-Bakargiev "an artistic and a psychoanalytic way of thinking to see the mind as co-determined by and with the body." This ethereal work, where the ghost of a ship speaks to the earthly aspects of the biennial visitors interacts with Yoldaş’ Saltwater Heart, in which a mesh of tubes on the sea bus keep the flow going, exploring themes of pollution and nature. 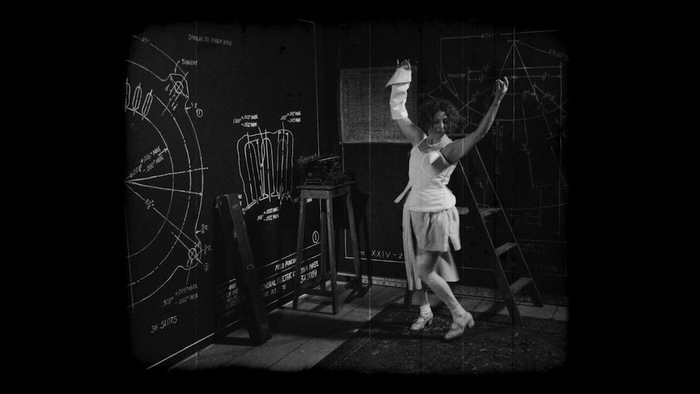 Inland, Merve Kılıçer’s work Mater.ial is installed in the public library. In two books with prints, Kılıçer narrates the stories of Tiamat and Inanna, the tales of creation. Her layers of etching on a metal plate with puntasecca and acquaforte recalls saltwater's corrosive properties. In the Splendid Hotel, completed in 1911, one of the oldest hotels in Istanbul, we find William Kentridge’s Sentimental Machine. This multichannel audio and video installation explores the distant experience of participating in social events. Mimicking Trotsky dictating messages to his secretary and sending them off into the world, Kentridge represents Trotsky’s idea of the human as a sentimental but programmable machine.

In Rizzo Palace, a wooden pension built in the nineteenth century and named after its first owner, Stefan Rizzo, the encounter with Ed Atkins’s Hisser is uncanny. In between distressing hissing sounds and mellow songs, we hear that something is collapsing, suddenly. Inspired by the 2013 news story of a Florida man whose house was swallowed by a sinkhole while he was asleep in bed, Atkins created this video by inviting the viewer to be a part of this experience of vanishing into thin air. 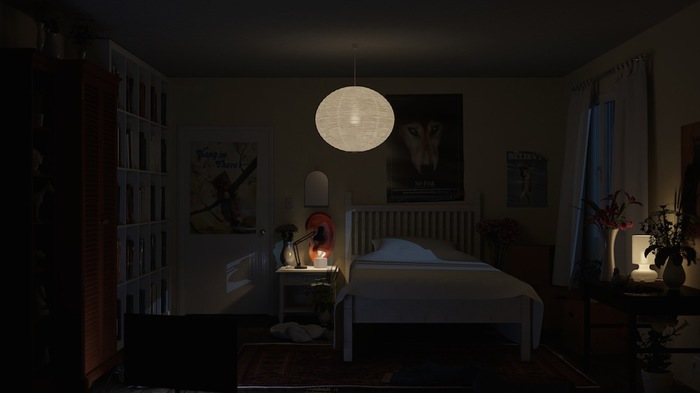 The exhibition presents artworks, as well as other materials from the history of oceanography, environmental studies, marine archaeology, Art Nouveau, neuroscience, physics, and mathematics. However, the most striking by far is the grandiose installation of sculptures that Adrián Villar Rojas has created for the sea, just off the pebble beach and waterfront of Trotsky’s house on Büyükada. The Most Beautiful of All Mothers comprises sculptures of animals placed on 20 cement plinths in the sea, just a few meters off the shore. This installation, for Villar Rojas, is the byproduct of  “a thinking process that develops throughout space-time coordinates”: the journey to reach the artwork is also part of the work.  Although astonished by Trotsky’s story in this island, the artist is neither interested in narrating the stories in direct relations of the meaning, nor creating a tale on his own. He just wants to “narrate, in a symbolic, metaphorical, or even mythological way.” Villar Rojas’ animals face the house, gazing towards the visitors of the biennial, as if talking to them in a language from another world. Each white fiberglass animal carries a brown earthy animal or organic thing on its back, made by combining organic waste and inert materials found in the Istanbul area and abroad. The contrast between the man-made material of the white animal and its sturdy structure makes this work even more interesting with the fragile nature of the organic material against the saltwater. 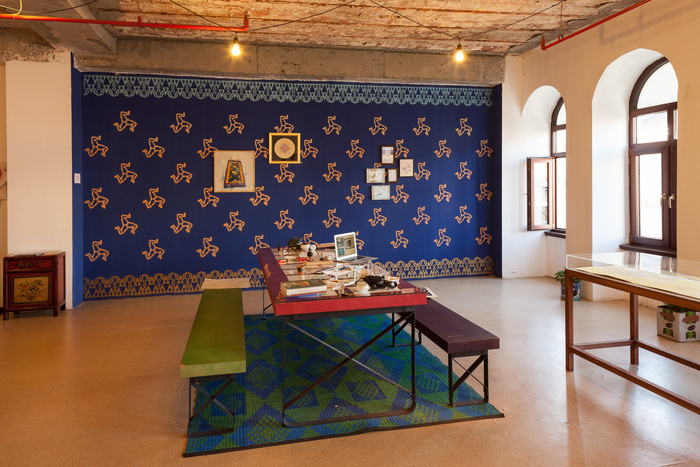 There are also “imaginary” works in the biennial, some presented at sites where access is denied. We cannot visit a radar antenna in Riva Beach, located in a military zone on the Asian side of the Bosphorus, looking towards the Black Sea—we must “imagine” experiencing it. The French Orphanage also remains an imaginary place due to unresolved international competing claims. Offshore, Pierre Huyghe is reportedly building an underwater theatre for marine life, but there's no way to verify that claim. Another work is in a shoe store: Cansu Çakar’s 1000 is located in the FLO building in Beyoğlu district, originally named the Anatolian Passage, which was built in early 20th century to Ragıp Paşa. Çakar displays the miniatures made in two months’ of workshops by women who were refugees or victims of violence.

Theaster Gates’s Three or Four Shades of Blues is located in another store. In the Tophane district of Beyoğlu, which came into prominence after the resident attacks on the galleries there, Gates’ two-story installation was inspired by Ahmet Ertegün, who was best known as the president of Atlantic Records. Realizing that he had over 200 soul and jazz records from Atlantic, Gates connects the fragments of Turkish history to his own life in Chicago. The installation includes a pottery atelier and a projection room containing slides from the archive of Dorchester Projects (Gates’ community center in Chicago). The slides contain images of archeological handmade objects, historic pottery, and landscapes of 1920s Istanbul. 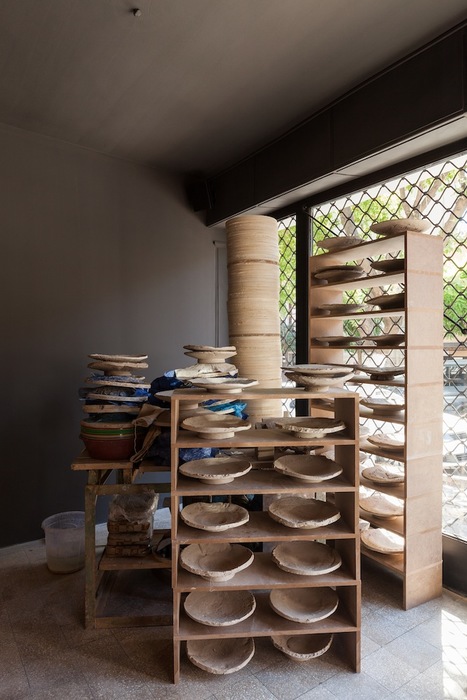 The broad range of venues is a key aspect of the 14th Istanbul Biennial. Rather than concentrating on the historical peninsula or Beyoğlu district, the exhibition in general endeavors to disperse the works into the city, like the waves of the sea, coming from a central location but dissolving into the peripheries. This also adds another layer to the reading of Istanbul, where the city is seen not only as a melting pot of cultures where the East meets the West, but also as a whole, which has a north and south, center and periphery.

A formidable strength of this exhibition is the word choice used to describe the exhibition maker or organizer. The 4th Istanbul Biennial introduced the term “curator” into the organization’s glossary, with Rene Block’s Orientation as the first edition with an assigned curator and theme. Christov-Bakargiev, however, preferred to use the term “draftsperson” rather than “curator,” as if to avoid the authoritative “filtering” connotations of the term in favor of creating a more democratic platform where artists could immediately respond to social, political, and artistic developments. Füsun Onur’s work, Sea, which is a small white boat with the sound of a poem being read out loud, travels up and down the Bosphorus. As if it is a response to the turmoil happening in Turkey right now, and to the refugee crisis in Europe, Onur’s boat at once addresses the abstract potentials of space, time, rhythm, and form, while reminding us of the very real dead bodies being washed ashore in real time.

The Bergen Assembly: Translating Research into Learning, and Art
9/12/16

In the Bank: Carlos Bunga Resists Market Complicities in Theaster Gates' Newest Venture
10/9/15
COMMENTS (0)
ArtSlant has shutdown. The website is currently running in a view-only mode to allow archiving of the content.