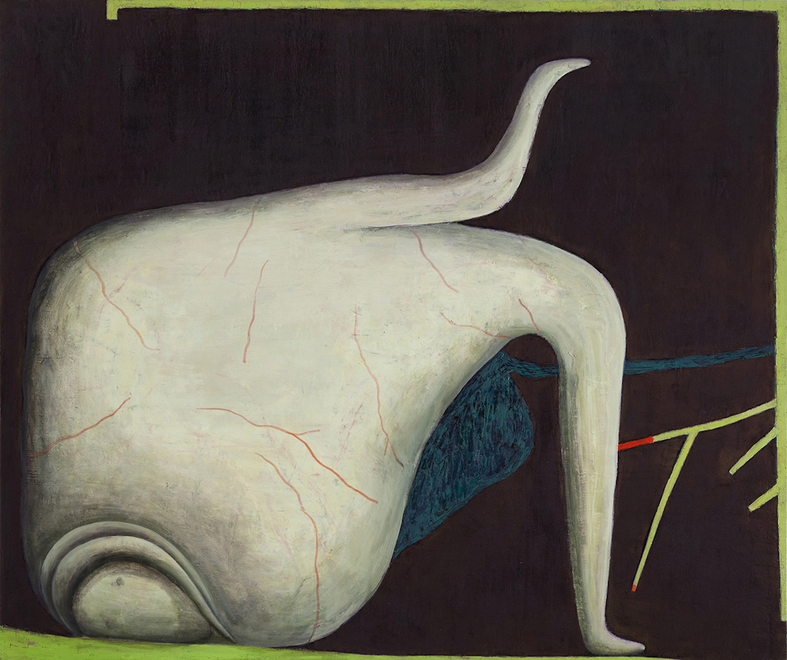 Michael Heizer once wittily described the Fall art season as the art world equivalent to duck hunting season, with collectors and viewers returning from their summer homes hungry for new art experiences. While it might seem a bit of a stretch, and maybe a little deprecating to the artist ducklings, there is some truth to that feeling of anticipation we have of wanting to see what is going on after the dog days of August. 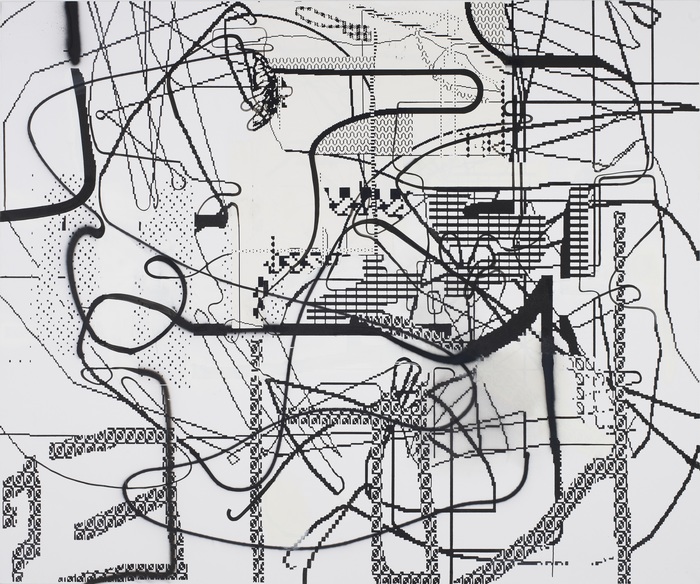 What will we find in paint this season? It is difficult to find overarching themes and styles in much of the current work of the past few years, compared to the 80s (when art “movements” came pre-packaged with names like “neo-geo”) or the early aughts when a single artist (like Damien Hirst) could fill a dozen galleries with his brand. We are seeing a return to a more intimate, personal type of painting—one that points toward a style that while conceptually vital and disciplined, and drawing upon an array of influences, shows an artist who is primarily a maker of painterly images, ones that are quirky and personal. A good example of this is this summer’s Albert Oehlen retrospective (Albert Oehlen: Home and Garden) at the New Museum, as well as his concurrent show at the Gagosian Gallery ("Home and Garden" Annex). Oehlen, along with Martin Kippenberger and Werner Büttner, were part of a wave of German Neo-Expressionists who, like Rainer Fetting and Salomé, sought to reaffirm the primacy of painting. Oehlen and Kippenberger espoused a tongue-in-cheek approach to their work, mixing in a little Duchampian humor, albeit of a more schoolboy variety. In the early 90s, though, Oehlen dropped the stand-up shtick and sought a new approach to making paintings. Oehlen went back to basic—a kind of ground zero of painting—where he began working in series, such as his “computer paintings” (such as Untitled, 2008, above), which attempt to find new ways to examine the type of paintings (like Jackson Pollock's) that defined abstraction in American painting since the 1950s. 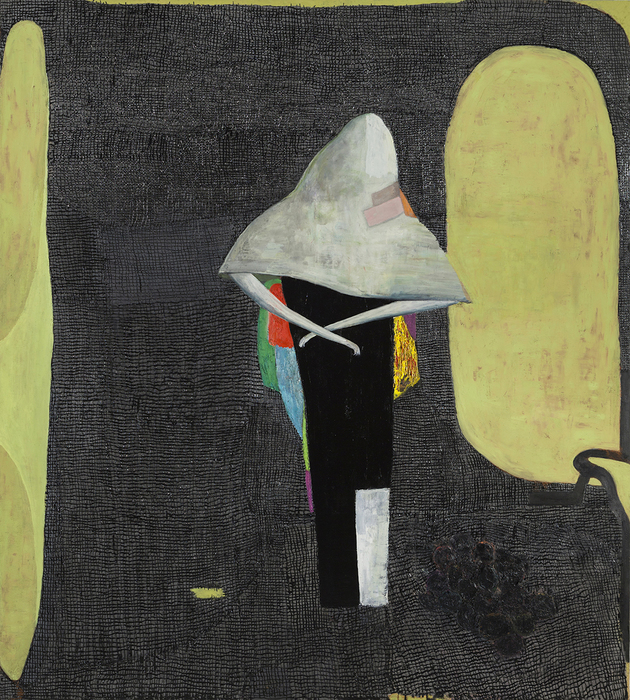 Brenda Goodman, Almost A Bride, 2015, Oil on wood, 80 x 71 inches. Courtesy of the artist and Life on Mars Gallery

It is this sort of DIY, heart-on-the-sleeve approach to picture making that seems particularly relevant now—a kind of visual antithesis to the corporate branding that has dominated much of the art of the past few years. Brenda Goodman, who had an exhibition at Life On Mars Gallery this spring (Brenda Goodman: New Works, 2015) will be having a full retrospective at the College for Creative Studies in Detroit this fall, as well as being included in John Yau’s Painting is Not Doomed to Repeat Itself at Hollis Taggart Galleries. Goodman’s paintings resist definition. Unlike Oehlen’s work, which retains the framework of serial structure, Goodman chooses to find the image as she paints, lending her work an element of free association, one in which Goodman allows the viewer access to her process. In works such as Almost a Bride (2015), the figurative element is grouped with a variety of abstract marks of pure gesture; one gets the sense of an artist who eschews the vocabulary of pre-existing forms, instead putting a premium on visceral connection. There is a rawness in Goodman’s work, a stripping down of empty style and trope, that allows us to connect in a way that feels genuine. 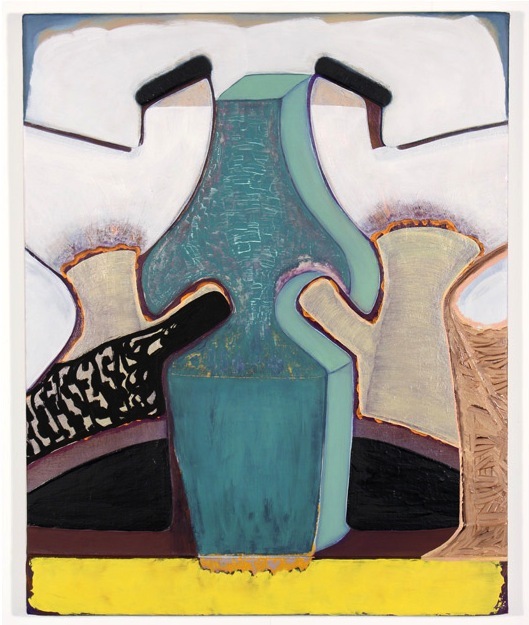 Magalie Guérin, whose work is at Lyles & King (Magalie Guérin: Project Room), also ascribes to Goodman’s direct approach to paint, though, like Oehlen, she doesn’t abandon some of the irony and formal structure of her earlier work. In the past Guérin has worked in photography and drawing, allowing for cross-pollination between the two disciplines. Often quoting from other historical works, for example Robert Mapplethorpe photos or the work of Diane Arbus, Guérin played with ideas about authentic gesture and also explored the personal through her appropriation strategies, à la Sherrie Levine. In her new paintings Guérin begins with primary structures—an image of a hat or four-leaf clover—and then explores it through different approaches and painterly processes. While the formalistic approach might yield slight payoff, Guérin instead wrings a wealth of playful, quirky visual excitement from limited means. 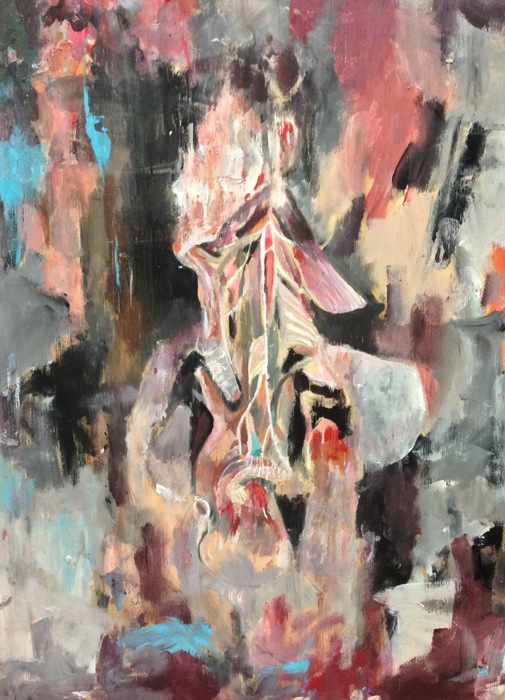 Erin Smith, i was chased by a penguin, 2015. Courtesy of the artists and Amy Li Projects

Erin Smith is a young painter who will be showing her small-scaled but high-impact work at Amy Li Projects (The Right Place at the Right Time). Smith combines gesture and style in a mash-up of visually exciting color and form. Her work combines the layering of images, reminiscent of Gina Magid’s fabric paintings, with a painterly touch that calls to mind the walls of paint of Clyfford Still. The painter Mira Schor, whose work seems like a role model for much of the work being produced today, used the term “modest painting” to describe a type of painting that is powerful, intelligent, and free of bombast and empty pictorial rhetoric, when describing what she aspired to as a painter. In contrast to the paintings of Leon Golub, who used historical figures and generic “types” to depict conflict, or Jacob Lawrence who illustrated the political implications of race during the Northern Migration, Schor renders the personal political by defining a type of painting shies away from propaganda, and relies on more subtle, painterly tropes to speak for the artist. In some ways “modest painting” might be a more immodest goal to aspire to, leastways more difficult to attain, yet the term has a rightness about it that seems to fit our current moment, and ideally defines where we are headed.

Under the Radar: Super Pop Boy | Leonard Zinovyev | Taco Eisma
1/10/19
COMMENTS (1)
Some good work
Enrique Celaya shows in Chelsea, and Dana Schultz too. Great shows.
Comment by: jude pittman on Sunday 09/20/15 at 12:52 AM
ArtSlant has shutdown. The website is currently running in a view-only mode to allow archiving of the content.