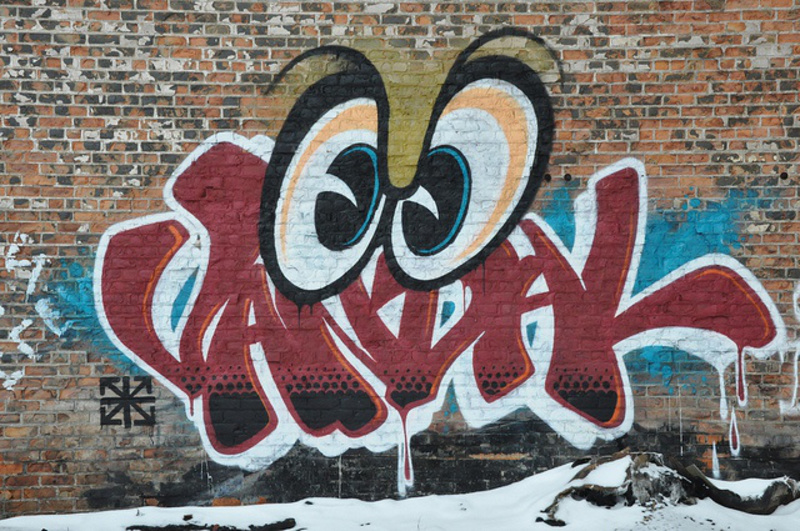 by Kimberly B. Johnson

The mural, titled Vandal Eyes, was painted legally in Detroit, according to the subsequent lawsuit filed by RIME, who is referred to in the suit by his legal name of Joseph Tierney. Even a quick glance at Scott and Perry’s red carpet attire does recall distinct similarities to the original painting, most notably the eyes on the back of Scott’s suit, and in the lettering at the bottom of Perry’s gown which reads, “VANDAL.”

In the lawsuit, Tierney’s legal team states that,"not only was his art exploited by Defendants, but his credibility as a graffiti artist was compromised by inclusion in such a crass and commercial publicity stunt.”

The lawsuit is the latest in a spate of graffiti artists suing commercial corporations for copyright infringement and intellectual property theft, and the case continues to press interesting issues to the fore.

First up for debate is the treatment of original artworks in the public space, and how the law and the industry should handle them. Setting one example of good practice in 2012, apparel label Supreme licensed the rights to use works by Basquiat throught the late artist's estate. The Maya Hayuk vs Starbucks case that we reported on just last month has raised many questions about how to navigate the shady—oftentimes highly subjective—areas of reproduction, appropriation, and homage, in general, but particularly concerning public mural paintings. What is clear is that stronger guidelines and more accessible information vis-a-vis these subjects is urgently needed.

Cases such as these are pushing copyright legislation to the limits and have already produced interesting legal standards and practices, such as grafitti artist copyrights on temporary work in NYC.

The case also raises the fundamental importance of an artist's reputation, intergrity, and credibility to their work and their right to defend it, especially for artists who have built their names in graffiti, where collaborations with mainstream brands can be especially damaging to the artist's own brand.

(Image at the top: Rime, Vandal Eyes. Courtesy of the artist.)