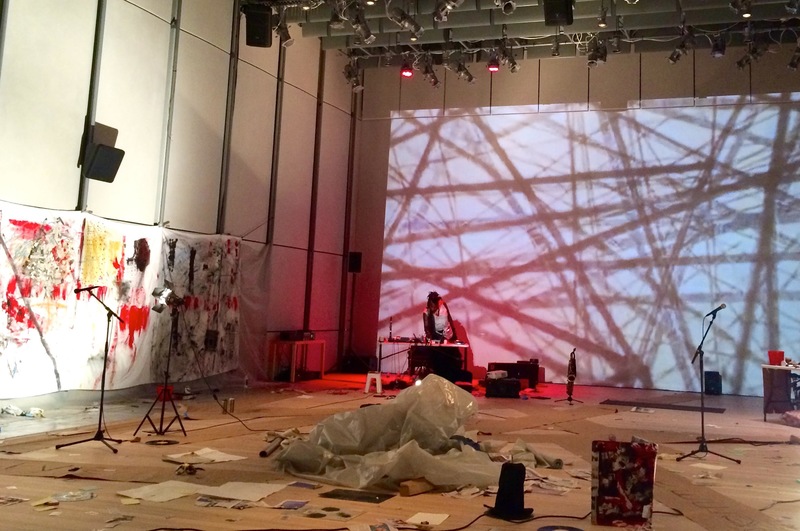 America Is Hard to See, But Could Performance Offer the Clearest Lens?

For five days New York-based saxophonist and multimedia artist Matana Roberts took over the Whitney’s third-floor theater for the latest installment of i call america, her “extended research residency”-cum-performance, situated as a response to the Whitney’s inaugural exhibition, America Is Hard to See. “America is hard to see” compels us to look, to try to understand the complexities of America’s visual history; “I call America,” meanwhile, establishes an agent, compelling us to act. Understanding requires more than simply looking, after all. How, then, can we best understand American art? History? Ideals?

Roberts’ performance—an action in itself—dug into American history with a wide shovel, demonstrating the importance of multisensory, spatio-temporal engagement with the country’s past, present, and future. The performance took the form of a open studio, the space cluttered with markers and documents of America from the nineteenth century to the present. Four large canvases hung on the side walls, projections lined the back, and a crumpled tarp sat squarely in the center of the room, surrounded by countless objects and artifacts. Roberts painted and collaged the canvases and added to the materials on the ground, all the while spontaneously composing her sprawling brand of free-form, electronics-infused jazz using a mixer and a variety of woodwinds. Watching the performance just below the Whitney’s expansive exhibition, one could see echoes of Arthur Dove’s The Critic and Robert Rauschenberg’s Satellite resonate in Roberts’ splatter-painted, newspaper-plastered canvases. The tarp on the floor, coupled with its surrounding detritus, recalled David Hammons’ assemblage Untitled. 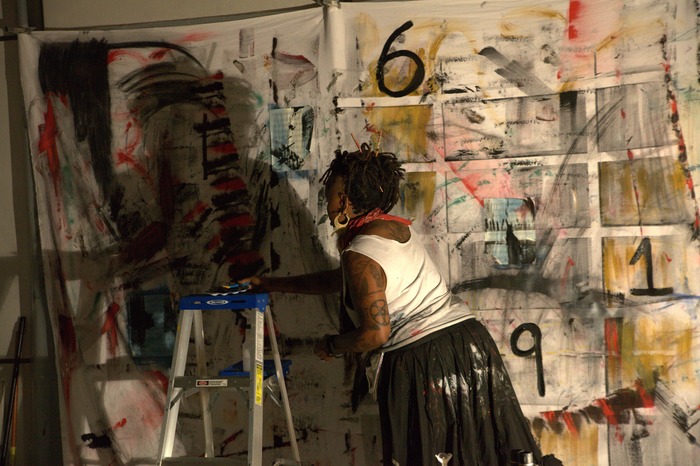 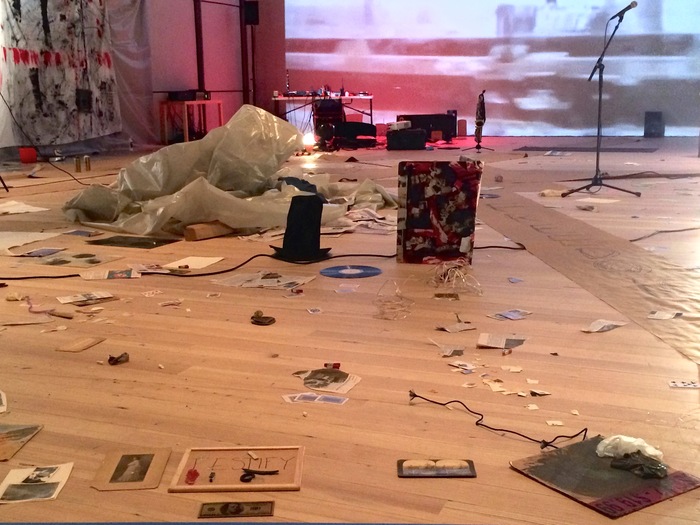 All images, unless otherwise noted: Matana Roberts, i call america, Performance at the Whitney Museum of American Art, August 5–9, 2015. Photo: the author

Most salient among the objects strewn across the floor were a handful of stereoscopic cards picturing a man peering at a grave, a black golfer, and a jolly post-bellum clown whose white, pointed hat eerily resembled a Klansman’s. These cards transported viewers to the late 1800s, when optical entertainment like stereoscopy first took hold—and more importantly, when the subjects that course through Roberts’s oeuvre (slavery, Reconstruction, migration) most palpably infected American society. But the cards served a higher purpose too: stereoscopy juxtaposes two near-identical images that require an external lens to make them cohere. By the same token, Roberts’ critique of the United States in i call america hinges on presenting disparate American images, ideas, and consciousnesses side by side, tracing them through history, searching for the correct lens through which to view them.

Questioning, even dismissing, American nationalism and idealism is not a recent phenomenon, of course; but in the wake of the tumultuous past 12 months, it has justifiably become a more prevalent and pointed practice. Ta-Nehisi Coates’ new book Between the World and Me, for example, dismantles the American Dream using evidence of injustices as old as slavery and new as the deaths of Michael Brown and Eric Garner. Coates reminds us, however, that dismissing American Idealism does not mean dismissing America. “I propose to take our countrymen’s claims of American exceptionalism seriously,” he writes in his book’s opening pages. Far from defeated, he implores his readers to keep questioning and, more so, fighting. 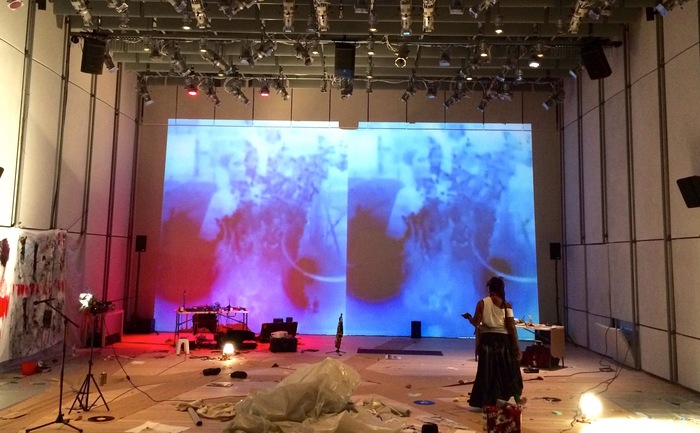 In i call america, Roberts likewise serves as America’s interlocutor. Like Coates, she displays clear reverence for her source material, skillfully and fervently weaving together strands of American art (from early photography to assemblage) and music (from spirituals to free jazz and noise). Roberts holds America to its self-appointed exceptionalist tradition, too, but believes more emphatically in the possibility of the exceptional moving forward. “It seems like this country is waking up in new ways,” she said in a recent interview with WWD. But where do we go next? Roberts calls America, spurring its riled citizens to action, offering directions through time and space for the angry-but-aimless.

She draws gestural, directive lines between the art-historical documents at hand, placing them next to one another in an effort to understand them as a unit. Performance it seems, and specifically music, is Roberts’s stereoscopic lens—predicated on motion, able to engage time, space, and senses, and allow contact with the myriad physical objects she collects in a way that painting cannot. Sure enough, during i call america the theater overflowed with music, beyond even Roberts’ continual ambient soundtrack: from the kitchen timer she periodically set, connecting real time with musical time and historical time; to the conductor-like strokes she made on her canvases; to the way she walked about the room, high-stepping and with purpose, as if part of a marching band. Periodically she even played her instrument while marching, as if in a parade. But parades, like history, can celebrate or mourn, include or exclude.

What is this parade’s mission? What traditions are at play—or at stake? Roberts resisted divulging the answers; rather, she meandered through the space, refusing linearity, alternating her musical delivery between atonal blurts and more “acceptable,” traditional melodic runs. She riffed vocally on “My Country Tis of Thee,” manipulating a song about America’s past and present with different inflections, neither celebrating nor satirizing the tune. Instead, she was simply feeling it out, questioning its formation and implications. 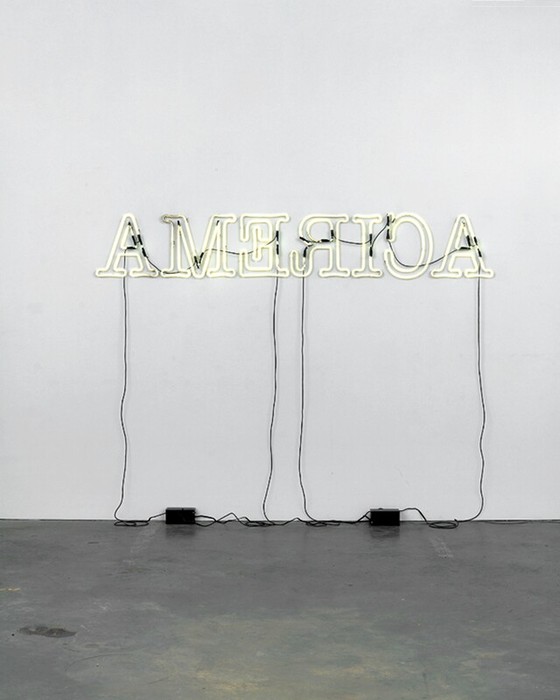 Glenn Ligon’s Rückenfigur ultimately serves as the Whitney’s best ideological conduit for Roberts’ performance. At first, it looks to be a simple neon sign that says “AMERICA”; after a moment, though, it becomes clear that each letter is backwards. We are forced to think about “America,” the word—interrogate its construction, its sound. Ligon’s piece continues on the other side of the wall: “negro sunshine,” it says.

Both parts of Ligon’s work lack a coherent stance or message but nevertheless cohere in and of themselves. We view them as single entities—confusing, perhaps, but condensed into one image, rich with contradictions and unbalanced rhetoric, cultural signifiers and American history. Roberts’ performance worked in a similar manner, throwing fragments of America about the room, fusing them with a liberated, improvisational stream of boundary-pushing music that—though in terms of ideas and technology, is quintessentially of the twenty-first century—booms with the spirit of the ages. She highlighted images and artifacts (slave photos, jazz music) often fixed into a certain “American” narrative and then jumbled them beyond recognition. The “American” ideal does not exist as it is written in the history books, she suggests; slavery is not one thing, nor is jazz, nor is a museum, nor is Coates’ main target, the “Dream.” Each possesses a popular narrative, told, as history always is, by the “winners”: in this case, the white American patriarchy. 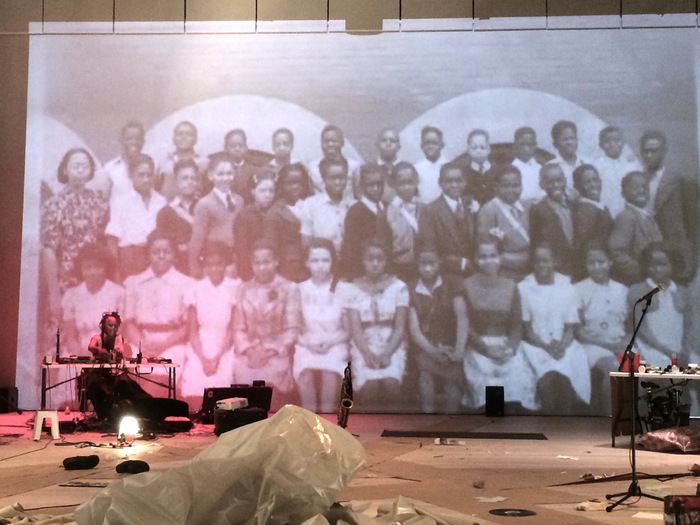 For Roberts, though, these histories and ideals are not obsolete, just misguided. In i call america she offers nothing concrete, just a demand for questioning, co-mingling, improvising, lyrically skipping across boundaries, all mitigated through her powerfully scattershot musical performance. But is anyone listening? In a museum predicated on identifying and reifying “American Art”—as complex as it might be—Roberts' message unfortunately lost some steam, drifting into the theater’s rafters. I never saw more than ten visitors in the space at a time; often, I was alone with Roberts. Visitors who did watch showed i call america’s incongruity on their faces, some grimacing and covering their ears (then quickly heading upstairs) when Roberts’ music became particularly unhinged. American art and history are still beholden to the institutions that display them—institutions that, despite forward movement, are largely yet to fully integrate the type of free-ranging, boundless work that Roberts proffers, keeping it instead in a dark theater literally beneath the primetime art. In i call america, though, Roberts picks away at these cultural totem poles slowly but surely, scattering their fragments gleefully—and hopefully—across the museum floor.

(All images, unless otherwise noted: Matana Roberts, i call america, Performance at the Whitney Museum of American Art, August 5–9, 2015. Photos: the author.)

Under the Radar: Super Pop Boy | Leonard Zinovyev | Taco Eisma
1/10/19
COMMENTS (1)
great explanation & review
I saw this show at the Whitney recently, and I found it hard to connect with the installation-slash-performance. I applaud Mr. Bucciero for this review, because it reframed my thoughts about the work and made me appreciate the layered, conceptually complex nature of the piece in a more profound way - more so than when I was there experiencing it myself! Thank you for writing it.
Comment by: Sarah Wolff on Tuesday 08/18/15 at 4:03 PM
ArtSlant has shutdown. The website is currently running in a view-only mode to allow archiving of the content.