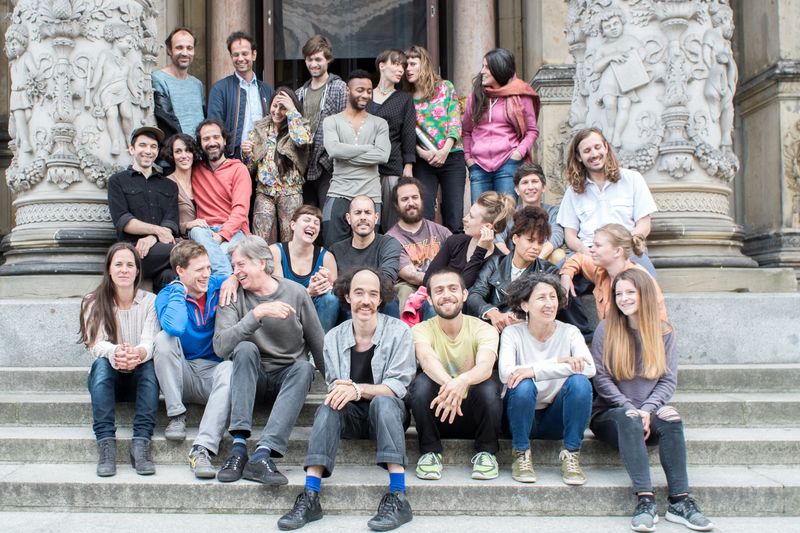 A young-girl enters the room, she gives a speech, she engages with the audience, she exits. Her acting double, an identically looking young-girl, enters the room after her. She performs the same speech in German with a slight variation.

Both girls perform the same character—a character modeled after manga character Ann Lee. In their combined acting, they agree to share the personality of a constructed character schizophrenically. They (she) perform an idea of identity that has been crafted by another: a director, Tino Sehgal. This scenario takes place not the space of the theatre but the contemporary Kunsthalle of Martin Gropius Bau where a collection of Sehgal’s constructed situations are currently re-performed daily by different participants.

Contemporary artists Tino Sehgal, Xavier Le Roy, and collaborative artists Alexandra Pirici and Manuel Pelmus create art exhibitions that integrate theatrical and dance choreography into the framework of the art museum. These tactics include creating sketches, having performers loosely memorize scripts, and encouraging ad-libbing in order to allow a level of indeterminacy to the conditions, social interactions, and artistic processes of consumption. In this hybridized exhibition space where a continuum exists between the exhibition and participatory display methods, meaning is constantly being produced anew rather than enshrouded within objecthood and rigid institutional methodology.  Indeed, with their hybrid forms, these artists challenge the institution, particularly the contemporary art model that proclaims its contemporariness but then cleaves to indexical logic and faulty modernist sarcophagi.

These thought lines are radical but by no means revolutionary to the history of art. Some predecessors to this exhibition methodology are Bertolt Brecht’s theatre for learning and Situationist International—both cultivated within the 20th century in order to catalyze audience action. Sehgal himself calls his work “constructed situations” that produce a temporary zone for social weavings allowing events to unfold. His situations are characteristically absent of clearly defined scripts, labels, and didactic introductions and instead encourage revisionist methods. These forms of display also create a type of “worlding”—a concept Carolyn Christov-Bakargiev has developed through her curatorial practice.[1] Worlding, perhaps informed by Ludwik Fleck’s concept of a Denk collective, is where fields of knowledge intersect and connect to create constantly advancing spheres of knowledge that break with typical categorization of disciplines. The Denk collective is integral to the activity of worlding, for it is ultimately groups of people meeting and interchanging lines of thought that generate meaning and question reality proper.[2] 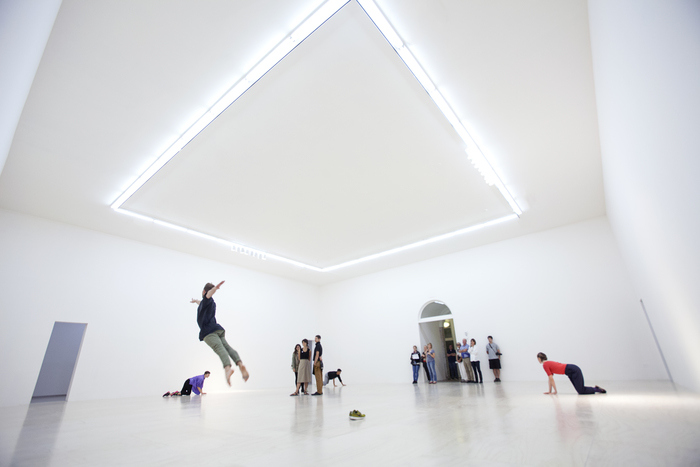 One such example of a worlding or an evolving participatory structure was Xavier Le Roy’s Retrospective at MoMA PS1 in 2014. Within one large hall, dancers and performers reenacted Le Roy’s choreography: a woman runs through the exhibition space cutting through the air with her moving body. A few minutes later, a different performer enacts the same gesture with a slight variation. In the center of the space, a woman dancing in Nike sneakers speaks about her own performances and life between the breaks and rhythms of Le Roy’s choreography. Her improvisation constitutes the introduction of a new element into the work: an element that both destroys and fouls the original choreography but also allows for mutation—the new.

This “new,” which can also be compared to the production of meaning in a Denk collective, is what Nicholas Bourriaud called in the 90s the “semionaut,” a figure at the core of remix culture, who travels between signs and might resemble a voyager, a disc jockey, or an alien. The semionaut is born in the aftermath of semiotics and post-modern theory where appropriation reigned as a methodology for dislodging predecessors and contending with a regurgitated consumer culture that shred away notions of authenticity and subjectivity. The new makes shifting form and re-/de-territorializing possible.

Following this logic, we can see how Sehgal’s work This Progress creates the frameworks to challenge the indexical quality of the “historical museum,” one that he says is characteristically about “producing a Hegelian distance.”[3] In its initial configuration for the Guggenheim Museum in New York, greeters are lined up chronologically according to age along the spiral hallway where they approach passing viewers. This physical presence of age and timelines creates a montaging of forms that reconfigures the temporal record systems that generally dominate the museum. The living bodies create interactions allowing for new thought forms or collectivization to ensue.[4] 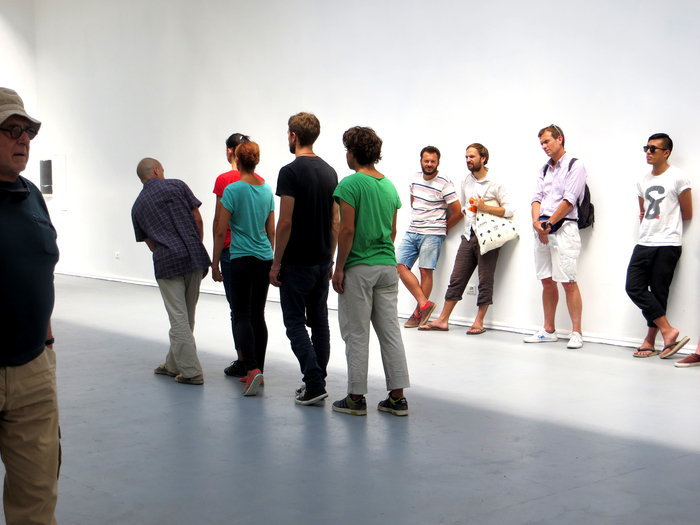 Alexandra Pirici and Manuel Pelmus,  An Immaterial Retrospective of the Venice Biennale, 2013, Romanian Pavilion at the 55th International Art Exhibition

The indexical nature of institution was also at the core of Romanian artists Alexandra Pirici and Manuel Pelmus presentation An Immaterial Retrospective of the Venice Biennale at the 55th Venice Biennale in 2013. Within the vacant exhibition space, six to seven performers called out names of past artists’ projects at the Biennale. The naming was followed by a performative interpretation of the artworks’ descriptions.

The performers underscore Romania’s specific cultural function in Italy where populations often cross borders in search of opportunity. The work they find is often low paying. Wages are sent back across the border accruing different social significance and wealth through the travel itself. Immateriality thus takes on an ironic but nonetheless melodious tone of expressing the inner workings of the liquid modern art market that gathers all the world’s cultures for display but then forgets to mention the high-speed travel of currencies and the migrant bodies of the museum workers themselves. Here, a Biennial pavilion becomes a space for thought collectivization where economics are entangled with lineages and EU citizenship dynamics.

All of these works contain speaking subjects who express themselves through language, words, and phrases. Sehgal’s work is particularly coded by riddle-like structures. Speech often begins with sound and noise then transforms into to words or lyrics. Works like This Variation (2012), then, become as much about growing into the way of civilization through language as they are about breaking down Beach Boys lyrics in a relationalist fashion. This Variation, initially commissioned for dOCUMENTA (13) is currently represented in the Martin Gropius Bau where I viewed it in a reconfigured structure. The viewer walks into pitch darkness and hears an ensemble of voices warming up and stretching out lyrics.

However, it is Ann Lee, mentioned above, which debuted at the Manchester International Festival in 2011, that best encapsulates the phenomena of an animated subject speaking through metaphoric art riddles. Pierre Huyghe and Philippe Parreno bought the rights to Ann Lee, a manga character, in 1999, and have since offered her to fellow artists to incorporate into their work. Sehgal presents Ann Lee as a real, speaking subject furthering her fictional identity as a character pulled out of the precariousness of animation death. For the exhibition No Ghost Just a Shell at the Kunsthalle in Zürich Huyghe and Parreno explained the project:

'Annlee' was a cheap model…'Annlee' had no particular qualities, and so she would have disappeared from the scene very quickly. "True heroes are rare and extremely expensive …" (Parreno) Buying 'Annlee' rescued her from an industry that had condemned her to death.

Huyghe and Parreno’s project was predicated upon the notion that Ann Lee must be shared across artists in order to accrue meaning. This perhaps serves as the best illustration yet of what a Denk collective does to a cultural signifier within the art market. Sehgal’s speaking Ann Lee recounts her change from two-dimensionality to three-dimensionality and finally four-dimensionality, always striving towards a more real, meaningful dimension away from her impoverished characteristics.

Ann Lee, in Sehgal’s performance, is a young girl. A young girl, as French collective Tiqqun described in their manifesto Preliminary Materials for a Theory of the Young-Girl, is a subject who only experiences his/her own emancipation through the experience of the self as an object. Thus, Ann Lee, the performing, speaking subject, is cast as a tragic character speaking in a coded way of communication set by puppet master Sehgal. Ann Lee’s final statement to the audience before she leaves and her acting double enters the room to repeat the script in German is: “What is the difference between a sign and melancholia?” Melancholia is, too, a condition full of signs but without defined origin. There is no indexical logic to melancholia or melancholic subjects, and yet it is the female melancholic who is often put on display and forced to regurgitate stereotypes defined by patriarchy in order to gain access to a produced subjectivity—a gesture dance Sehgal seems to be keen on playing.

While these artists are most certainly invested in critiquing the museum structure and the exhibition framework, there is something at the core aligning these choreographers with a writer tasked with drafting a novel within the confines of his or her historical moment. The only way exit, and perhaps also enter a particular thought style at the same time, is to engender a bastard view, an exterior perspective that starts with the interior. Thus, the hybridization of the exhibition space, the blending of theatrical methods, can be seen as this very othering of the institution that begins with a warm-up, a sketch.

[2] “A thought collective is defined by Fleck as a community of persons mutually exchanging ideas or maintaining intellectual interaction (1935a, II.4). Members of that collective not only adopt certain ways of perceiving and thinking, but they also continually transform it—and this transformation does occur not so much “in their heads” as in their interpersonal space.” Via.