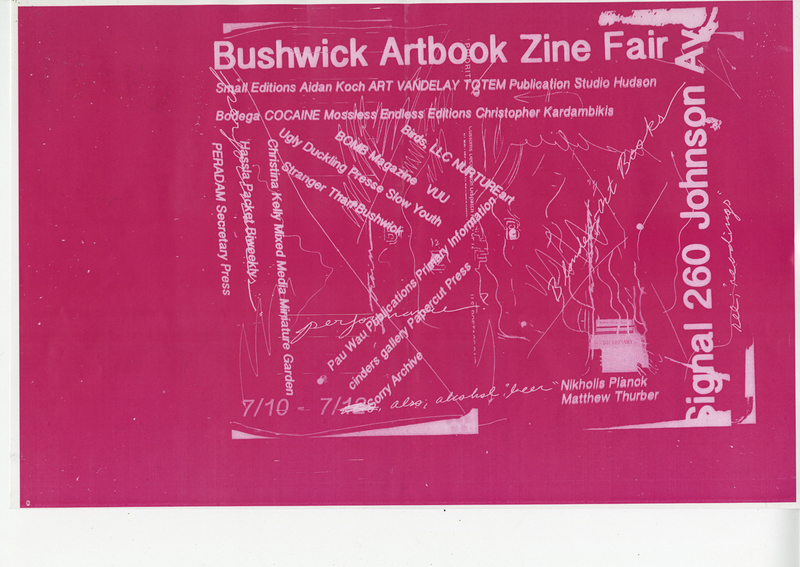 Why Collect Artist Books and Zines?

“Ownership is the most intimate relationship that one can have to objects. Not that they come alive in him; it is he who lives in them.”   —Walter Benjamin [1]

Brooklyn-based publisher and curator Blonde Art Books recently organized its third annual Bushwick Art Book and Zine Fair (BABZ). A three-day event, BABZ featured a few dozen independent publishers hawking their goods, plus workshops and performances throughout the weekend. The presence of something like BABZ is not particularly surprising; a market for Do-It-Yourself printed matter still exists, whether at fairs like BABZ, stores like Printed Matter, or even in university library collections (such as Barnard’s or NYU’s). What drives collectors to keep these venues running? What, or who, fuels the market? 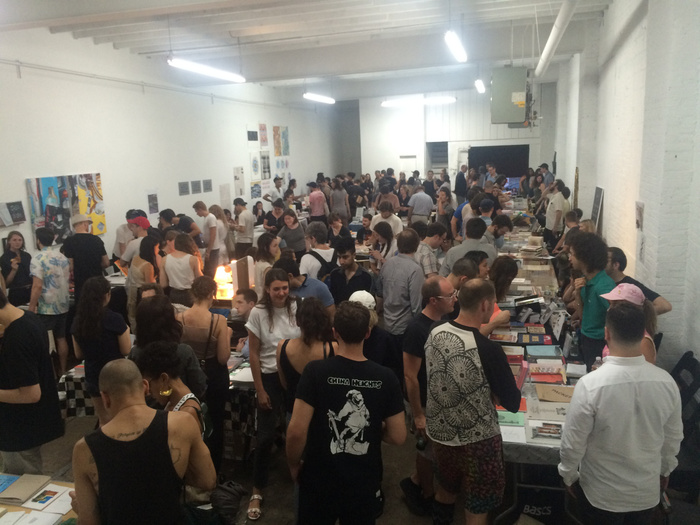 Blonde Art Books founder Sonel Breslav positions the practice of art book and zine collection near to—but separate from—art collecting at large. In a post-fair interview, she noted the distinctions between the two collecting practices as chiefly to do with accessibility. “Having something [a buyer] can walk away with quite easily,” she added, referring to the size and cost of the objects on offer at BABZ, “opens up the space for what it means to be a collector, or to be able to connect to art in a different way.” In other words, a collector could have easily left BABZ with a tasteful haul, having spent just ten or twenty dollars.

But do low prices and replicable goods enable a new class of art collectors? Or is art book collecting a “lower” pursuit than art collecting precisely because of the cheaper, hand-made objects involved? Printed Matter attempts to squash any such hierarchy. Co-founder Lucy Lippard explained in a 2006 interview with Julie Ault: “Printed Matter was triggered by Sol [LeWitt]’s involvement in making artists’ books which got no respect; dealers used them as freebies—bait to draw in collectors to buy the big stuff. We both took them more seriously and wanted them to become a real option for artists.” For Lippard, artist’s books (and art books and zines, for our purposes) are a collectable medium in their own right; they do not sit on a lower rung on some artistic ladder.[2]

Breslav likewise conceives of no such ladder. For her and Blonde Art Books, the boundaries between art book and “art” (or “book”) are fluid. As with many collectors, her bookshelves do not differentiate between mediums: art books, zines, histories, and theoretical texts sit side by side. Each object can serve as inspiration for an aspect of her overarching artistic practice—and each object possesses, as it would to any collector, some type of personal value. “They often bring me back to a place in which I maybe met the artist or a bookshop where I had an extraordinary experience,” she says. Her invocations of memory, inspiration, and social encounters illustrate moreover the ultimate appeal of this type of collecting: creating and collaborating. 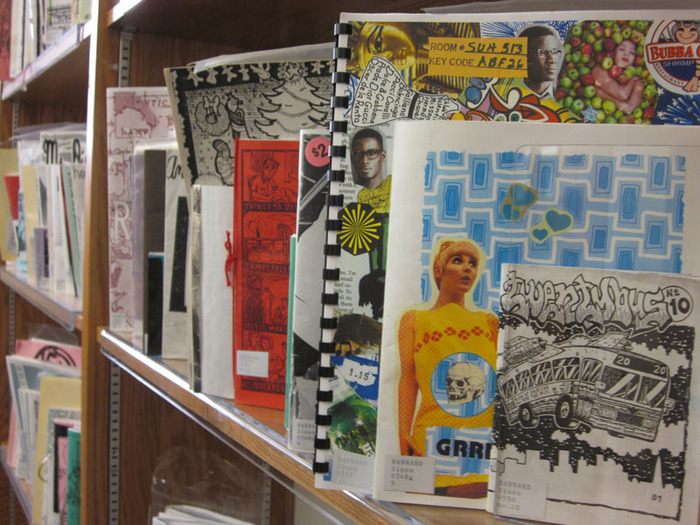 In the communities in which these objects thrive, there is always an imperative to make as well as collect. One of Breslav’s favorite aspects of BABZ is the “shared community that shares ideas and shares resources as well.” The small, open atmosphere at the fair encourages socializing and collaborating between publishers and publishers, and publishers and visitors, in a way unseen at larger art fairs. In an otherwise hyper-competitive New York art world, zine communities offer an alternative—however utopian—in which the roles of artist, dealer, and patron are happily interchangeable. 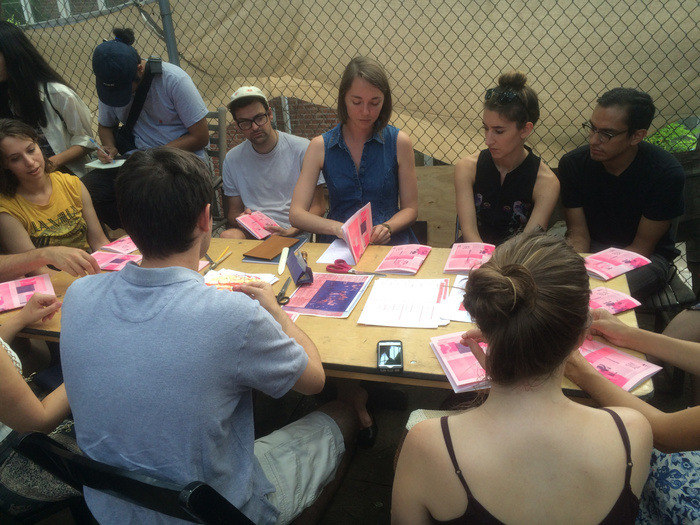 At BABZ, for instance, Corina Reynolds of Small Editions hosted a book-binding workshop in which all the attendees were given materials with which to assemble a zine about how to make zines. Traditional galleristic distinctions between seller and buyer, artist and patron, began to collapse. That zine-makers want you to make zines alongside them courses, further, through the medium’s roots. In an interview, Barnard zine librarian Jenna Freedman commented on the format’s independence, as well as its promotion of mutual admiration, and inspiration. Zines are self-published because of “the zine's content, the author's ability to maintain creative control, or control of distribution,” she said. As a result, advertisements—as would exist in traditional art magazines—are scarce; when they do show up, they emphasize communal support: “You advertise my zine, and I'll advertise yours,” Freedman added.[3] 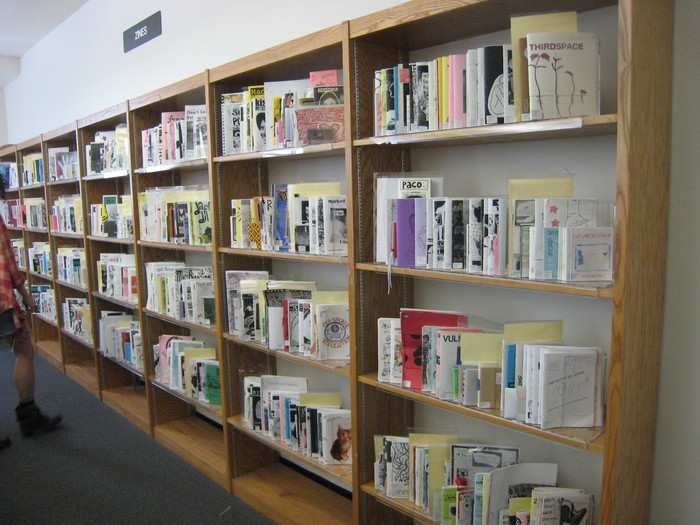 Whereas Walter Benjamin says that writers write “because they are dissatisfied with the books which they could buy but do not like,” zine-makers like Freedman or the people at Small Editions often create because the “market” is in their view rich—not in cash flow, of course, but in ideas.[4] “Young zine makers are writing for each other,” Freedman said, “and in a different way than if they were writing a journal or scrapbook, prior vehicles for self-documentation.” A zine collector measures exchange value by message and creativity. Breslav noted that for BABZ-goers, “it’s important for there to be a sense that their voice can be heard—which is again, quite different from a lot of fair circumstances.”[5]

Art book and zine collecting offers buyers fiscal, creative, and emotional agency in a way collecting painting and sculpture largely does not. In “Unpacking My Library,” Benjamin discusses the practice’s “childlike element.” For adult collectors, acquiring whatever type of “beautiful object” represents a rebirth, he writes. But “among children, collecting is only one process of renewal; other processes are the painting of objects, the cutting out of figures, the application of decals—the whole range of childlike modes of acquisition, from touching things to giving them names.”[6] Breslav and Freedman pointed to collecting’s activation of memory and experience; in the case of art book and zine collecting (like Benjamin’s book collecting), this activation spurs a call not to the viewer’s accountant but to their creative impulse—to the proverbial, and literal, drawing board.

[2] Note: for this article I am grouping together zines, independent art books, and artist’s books, as they are all independently-published publications with—in general—similar markets. Lucy Lippard more strictly delineates the mediums. “My own definition of an artist’s book was quite strict,” she said: “mass produced, relatively cheap, accessible to a broad public, all art and no commentary or preface or anything that wasn’t part of the artwork by anyone… Hand-made, one-of-a-kind books were something else—often very beautiful, but the kind of ‘precious objects’ I hoped [Printed Matter would] escape.” Although some BABZ tables sold “precious objects,” I think their and Lippard’s goals are often still compatible.

[3] Trading is a big part of zine culture too; amassing a great zine collection often necessitates frequent creating and socializing.

[5] In its early days at least, Printed Matter served a similar purpose in Lippard’s view: “We were the only place artist’s bookmakers could go and we always got flack when anything was rejected from the store… Printed Matter was an incredible support system for artists (despite its insolvency and various organizational problems).”

Kusama in the Morning, Prince Before Bed: Susan Hancock on Collecting and Living with Art
3/30/16

Artists' Desks
11/4/15
COMMENTS (0)
ArtSlant has shutdown. The website is currently running in a view-only mode to allow archiving of the content.