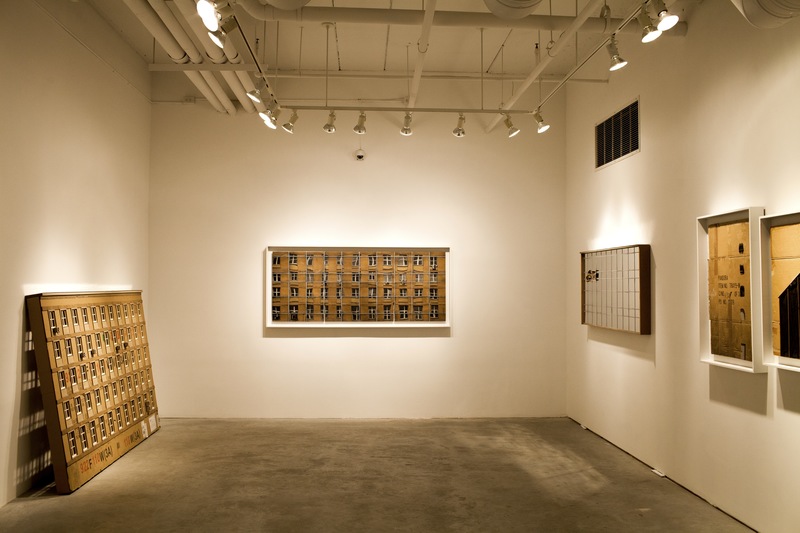 Evol Brings East Berlin to Chelsea, with Talk of Gentrification

Gentrification is the big bad wolf in the modern day urban party. Never formally invited, it heard of the gathering by word of mouth and will restlessly attempt to enter even if it has to blow the entire structure down. No one likes it—neither the apologetic gentrifier nor the displaced community who lack enough financial clout or power to resist or keep up with the shift. It barrels forward as if it has no memory of itself, all history lessons completely erased. After it passes, the area has a new face: cultural and physical landscapes are transformed, a coat of fresh paint is at once attractive and hollowing.

In his show Unreal Estate at Jonathan LeVine artist Evol brings a familiar conversation back to New York’s Chelsea art district, a place where art itself played a role in transforming a neighborhood and changing the real estate market. 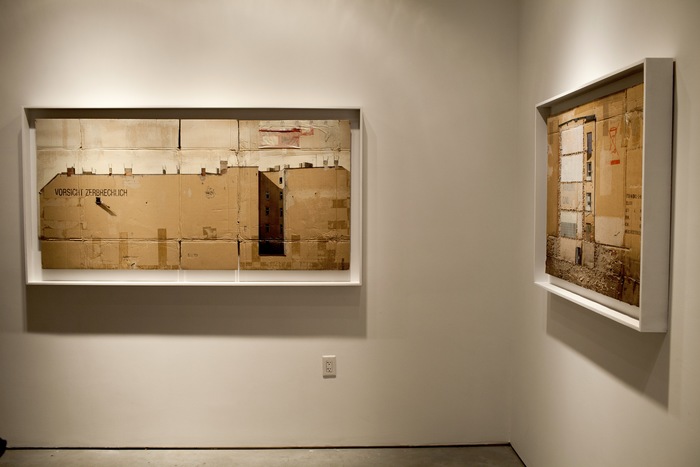 Altering streets is nothing new to Berlin-based Evol. His trompe-l'oeil paintings of residential buildings in East Berlin are deceivingly realistic and commonly found on surfaces common to the streets: on cardboard boxes to be framed and placed inside of an art institution, or on outdoor electrical boxes and cement slabs that remain in their native environments. The tenements he recreates in miniature are usually depicted in daylight and in a state of vacancy—as if they house a working class who use the space for little more than sleep. There is a continual awareness of the ordinary, established city block. Tears and holes on the façade of his painted buildings are cleverly matched the defects that his cardboard canvases already had; tears, folds, tape residue, and packing labels become features in his painted buildings, the imperfections suggesting the neighborhood’s history and battles. 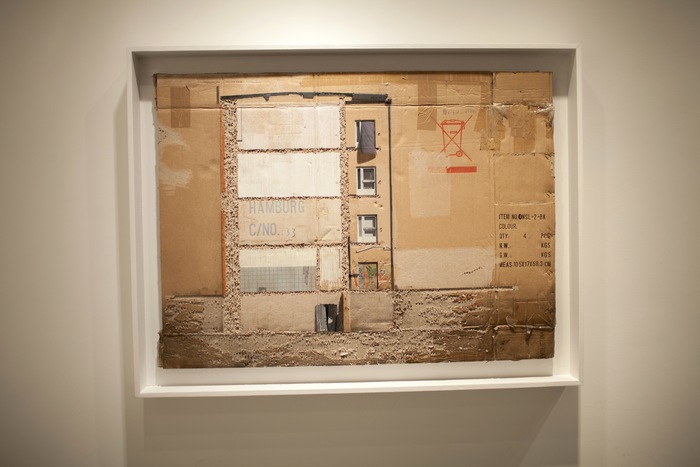 These architectural scars (in the artwork and in real life) may be charming to a visitor, but to Evol they “symbolize the possibility of a certain freedom.” In less affluent neighborhoods, there is more room to self-govern, to try and start a business or to openly struggle. With the rise of luxury condos comes a shift for the responsibility of culture—the ability to create culture versus consume it—and this exchange is mirrored in the architecture.

In the front of the gallery there is a broken window painted on a cardboard box. Through the holes of another painting we can see construction undertaken inside a building’s gutted shell. In Who's afraid of Yellow, Orange and Blue?, a long, warehouse-like structure is covered in graffiti; the sun casts a shadow of scaffolding on a residential building in Shadows of Things to Come. Moving towards the back of the gallery, the work becomes more surreal and also more like an installation. 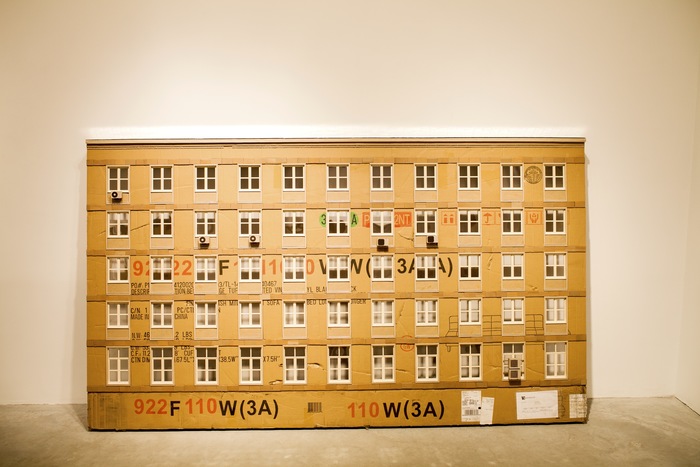 A funhouse mirror hangs opposite the show’s only sculpture, which is a typical Evol city building spray-painted on a cardboard box, leaning against the wall. However a sticker on it reveals a New York City address. All reflections in the mirror are warped: the building along with the gallery hopper viewing the artwork along with the leisurely white walls of the gallery. Everything is caught in the eye of gentrification, participating in its rituals, brought together by this moment of awareness in the artwork’s contorted reflection.