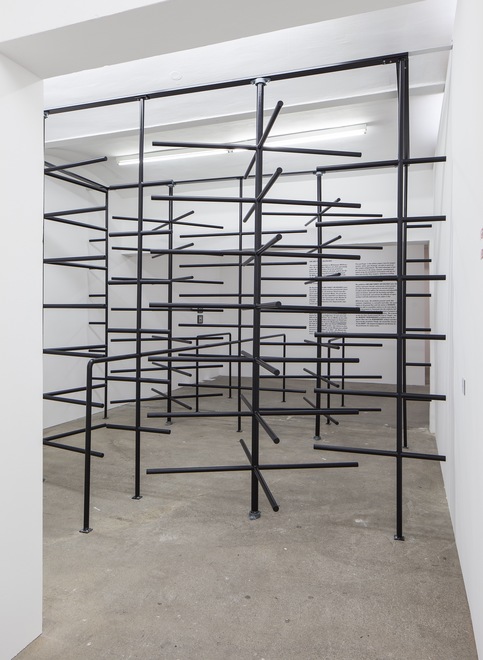 Entering Fire and Forget. On Violence, the viewer passes through two of the four rotating gates in Daniil Galkin’s installation Tourniquet. Beyond this eerie passage, a provocative text speculates on the impact of technology on modern warfare. Its thesis can be characterized as follows: since modern technology has largely emancipated warriors from a traditional active sense of duty—allowing them to literally fire and forget—does this change in confrontation halt the production and inevitable perception of violence?

At the core of this question is a matter of distance. Distance, spatially speaking, diminishes comprehension of the immensity of war and humanitarian crimes. Coupled with death-producing machinery, spatial distance also removes the affective concept of murder.[1] However, temporal distance also allows us to gain recognition in order to see actions, regardless of how mechanically enhanced they are, against brute reality. Spanning the length of 20th century and stretching into the present, Fire and Forget. On Violence offers up artists’ questions and responses that weigh in on this non-affective phenomenon. 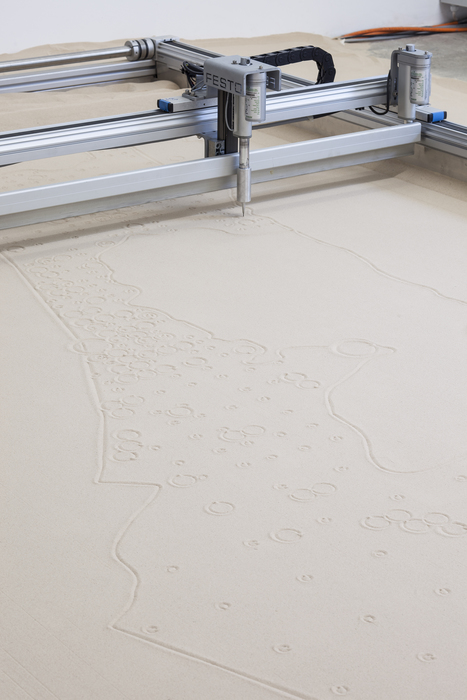 The exhibition is separated into themes—Borders, Affect, Memory/Remembrance, and Event—with the first section exploring physical border spaces such as the US/Mexican and Israeli/West Bank borders where bodies are policed and patrolled. The Country Sand Printer (2014) by Roy Brand, Ori Scialom, and Keren Yeala Golan traces the evolution of the Israeli state through its settlements. Rather than displaying the violent reality that the settlement project created, the sand cartography machine shows four different maps representing three planning periods: 1949, 1951, and two from 2014. Hash marks in the sand depict these gradual states: stage I, 1949, reflects existing settlements at the time of the founding of Israel; II, 1951, is the Sharon Plan that meant to scatter the influx of Jews around the state rather than in metropolitan areas; III, 2014, shows the failure of the plan and the eventual concentration of people around coasts; and IV shows the year 2014 once again, drawing attention to remaining settlements from 1967. Unlike traditional cartography, The Country Sand Printer uses a mechanic metal needle to lightly press lines in sand. This tactic ensures that traces of previous plans remain in the map’s membrane while new lines demarcate new immigration records. The Country Sand Printer also reorders temporal indices so that historical time is confined to five- to ten-minute periods of mapping.

There is another violence that this cartography reveals and subtly counters: the systemic violence of historic sequential time that favors origins and linear progressions over communal histories and cyclical experiences. This sequential time can also be conflated with the very fiber of modernity that reorders humanity with technical virulence. Here, the systemic violence of mapping is revealed to be almost more virulent than a period of war because it breeds future conflict rather than resolve. [2]

In the same thematic grouping, a fascistic looking Barbara Kruger text proclaims propaganda of a supreme race. This propaganda is not attached to a time or a place but instead characterizes the means where revolutionary fervors are distributed through slogans that favor action over thought. Kruger’s text references back to the propaganda characteristic of the Soviet regime or the Third Reich. 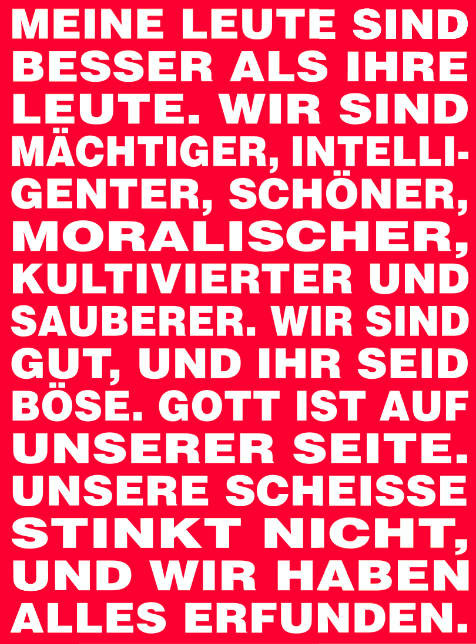 Many works look back to or reference the past, but—like Kruger’s poster—most contain a dangling reference to specific historical events. In the case of Amir Yatziv’s Antipodes, in which the artist followed military re-enactors in Europe from 2008-10, the camera only identifies the present locality such as Czech Republic or Russia and does not identify the battle sides that the mock warriors take on. Similar abstraction is found in Gillian Wearing’s video Sacha and Mum (1996), in which a mother and daughter vacillate between comfort and feuding. The mother is both the source and absolver of psychological pain for the daughter. There is neither a clear victor nor loser within the elaborate dance, which in turn allows the viewer to participate in the event’s unfolding. 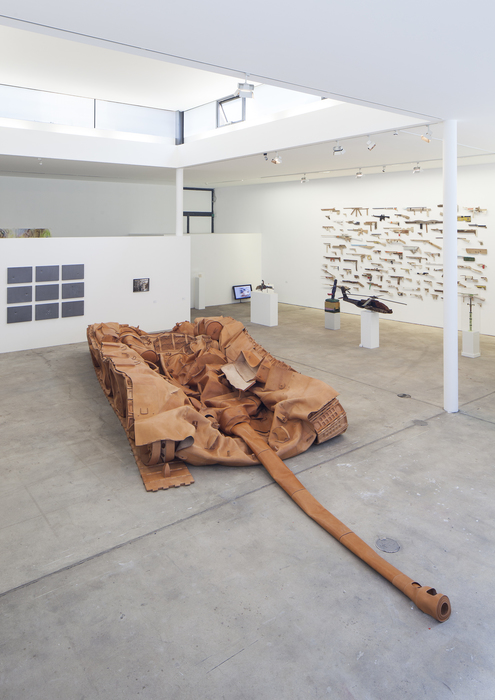 The overwhelming motif throughout the exhibition is military, with slight deviations such as Wearing’s work and Pipilotti Rist’s video Ever is Overall (1997), where a woman prances around a European city smashing car windows with a weapon made to look like a flower. Aesthetic responses to military sites include Jota Castro’s Guantanamo (2005), a heated narrow fenced in area mimicking a detention site, and He Xiangyu’s Tank (2011–2013), a deflated military tank made out of luxury leather. A bullet hole without a gun is featured in Emily Jacir’s Bank Mirror, Ramallah, April 22, 2002, a photograph in which traces of performative actions can be sensed through the voided space of trauma.

The exhibition allows viewers to gaze indirectly at and over trauma by allowing their proximity to the events in question to remain abstract. While initially sounding counterintuitive, Slavoj Žižek reminds us his book Violence that a cross gaze or even misplaced gaze can actually be productive for sight: “A dispassionate conceptual development of the typology of violence must by definition ignore its traumatic impact.”[3]

Žižek advocates a widening of the trench between the event of violence and the impartial gazer rather than the elimination of the caesura that has emerged. Surely, simply pointing to the fact that popular culture suffers from apathy would be futile. Fire and Forget certainly does much more than simply point, but is the revealing of rampant war fetishes and iconography just as paralyzing as staring at images of the ruins of trauma, as Žižek warns? Further probing this question of ruins and distance, contemporary writer and philosopher Ariella Azoulay quotes Heidegger’s “The Thing”:

Man stares at what the explosion of the atom bomb could bring with it. He does not see that the atom bomb and its explosion are the mere final emission of what has long since taken place, has already happened.[4]

Citing this quote, Azoulay too expresses the phenomenon of distance that catastrophic events produce when gazing; however she emphasizes that it is not the catastrophic event itself that makes witnesses not see, but that they looks too late. The moment is simply a fetish. This is the logic that the exhibition misses by often gazing too intently at the spectacle of what comes after, rather than on the actions before the siege, before the climax of the police state, the swaying robot police body.

[2] Susan Buck-Morss further expanded this sentiment during a lecture on her book Year One. Year One also attempts to re-write the traditional cartographic and sequential history of the Israeli-Palestinian conflict by creating networked times.