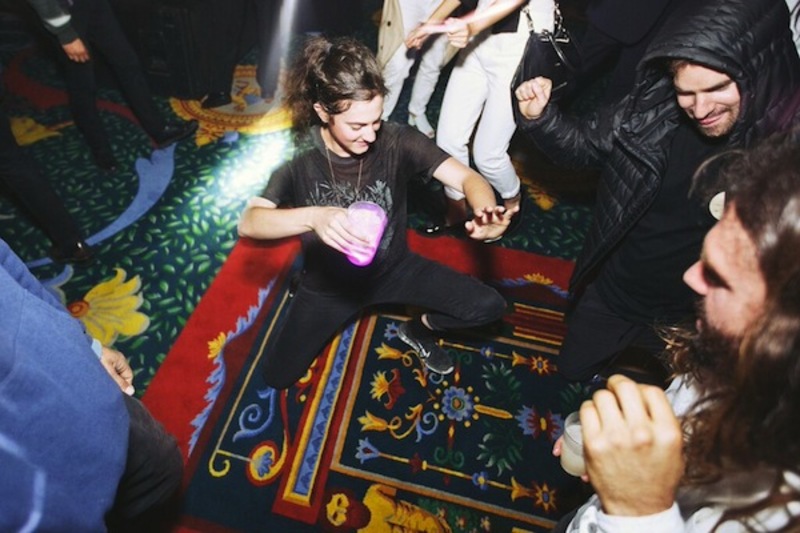 This Must Be the Place

The art bar has an amorphous history, beginning perhaps with Cabaret Voltaire and reaching critical mass with those pilot program Starbucks that serve wine and put out incomplete chess sets after sunset. My own baptism into this genre of space was descending into the speakeasy underneath China Art Objects’ original Chung King Road location seven or eight years ago. Cramped, hot, definitely not up to code—nonetheless, I felt insanely glamorous, tucked into an odoriferous red-lit corner, sipping warm beer, surrounded by people I considered categorically smarter and more interesting than me. 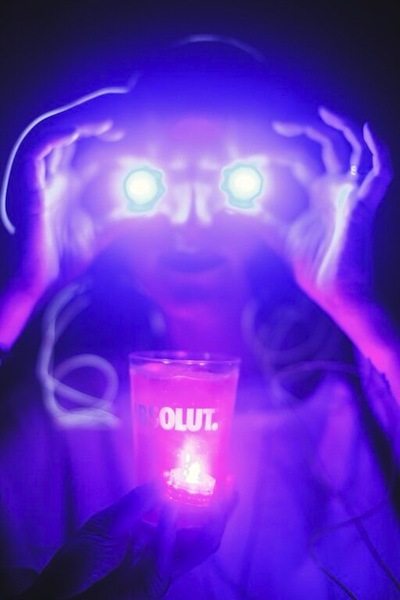 In a recent commencement speech, John Waters tells a fresh crop of RISD grads that “being truly rich means not having to be surrounded by assholes.” This is a good approximation of what I consider glamour: the frisson of being exactly where you want to be, and just slightly unsure that you belong. Los Angeles jealously guards her secrets, which makes them all the more rewarding to discover. Knowing this, real-estate moguls, PR proxies, and other agents of entertainment often collude to erect elaborate decoys known as clubs. 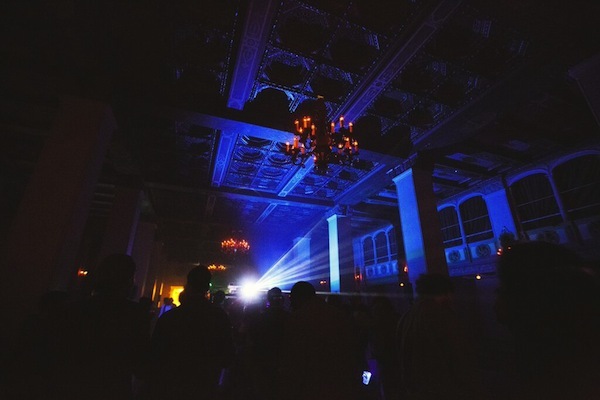 Cayetano Ferrer’s Contact, a one-night-only art bar/installation/party made possible by Absolut Vodka alighted upon us earlier this month. Taking place in the Tiffany Ballroom of The Biltmore Hotel, its Hype-Williams-meets-beaux-arts glamour felt less like my gritty, romanticized vision of an "art bar" and more like the clubs I found myself flailing around in while working high-end retail in West Hollywood in my early twenties. Parties with iconic-sounding names, helmed by celebrity DJs, and invariably guarded by a clipboarded woman standing next to a stoic, abundantly-necked bouncer. I breached them only after someone prodded on my behalf. My drinks were never free. Months later I might appear in the background of a reality television show about ambitious young women in L.A., on a special Girls Night Out episode. I was embarrassed by these revelations, but the shaded tone of those who pointed them out to me was not lost. John Berger’s version of glamour hinges on “personal social envy being a common and widespread emotion,” but as I was incapable of envying myself, this glamour felt put upon. Like body glitter. 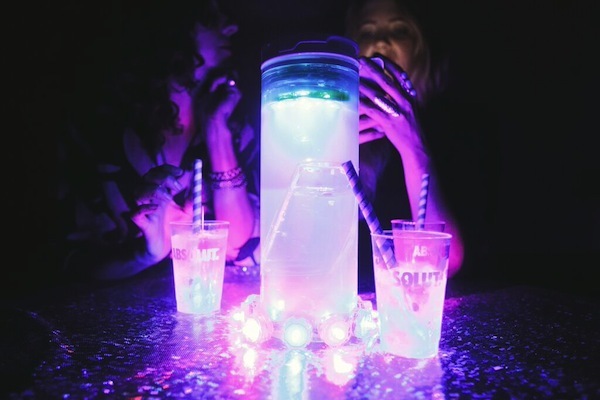 That Ferrer more or less recreated these conditions for a “fantasy party[...]where the artist picks the location, decor, soundscape, and composes cocktails together with a mixologist” is apropos considering his interest in space, Los Angeles, and especially his hometown of Las Vegas (whose megaton nightlife makes ours look like a ren fair). It's not about architecture per se, but ornamentation, representation, and the former as the latter. For the Hammer Museum’s 2012 Made in LA biennial, Ferrer created Grand Entrance, a chaotic patchwork of different casino carpets entered through an archway depicting displaced architectural elements rendered as light-up signage. Vegas' pitch perfect absurdity made newly visible by folding pastiche onto itself. 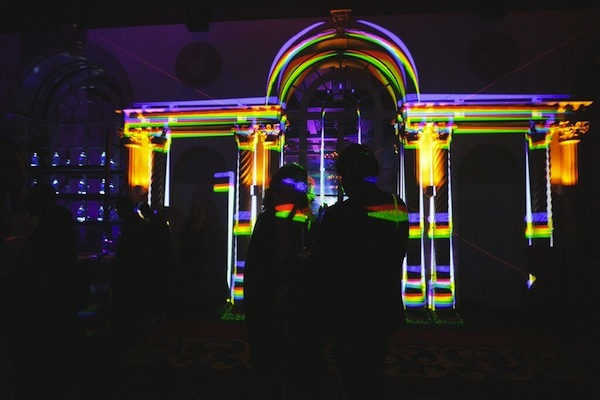 Back at the Biltmore, sipping glow-in-the-dark cocktails laced with B12, I watched Ferrer’s candy-colored lights slowly outline crown mouldings, fleur de lis, gargoyles, and portraits of European explorers. The ephemeral gildings of light and sound drew more attention to the room’s odd mix of revivalisms than the glare of day ever could. “The Tiffany Room at the Biltmore was my first choice from the beginning” Ferrer said via email after the party. In retrospect the installation (executed in collaboration with artists TOTAL FREEDOM, Jacqueline K. Gordon, and Nate Hess) worked to chisel loose both the gilding and meaning of The Biltmore. TF’s droning soundscape felt like the thumping beat of a club song spread out into a aural tableau of itself. My nerves pooled at my feet. I was on a date, I think,  that eventually wound through a private karaoke room in Little Tokyo before heading through another bar—a regular bar—and ended on a desolate cliff somewhere in the hills of Elysian Park, the pink rim of sunrise barely coming up from behind the beatific sports lighting of Dodger Stadium. Similar lights are used in film to create day where there is none. They’re called god lamps.

I don’t know how to look at Los Angeles. It takes the work of art, often made by a recent transplant or transient, for me to see her as she might appear to those who haven’t grown up between taco stands and movie sets—the flip-flap of tortilla couples on a grill, a gorgeous mobster leaning on a sun-dappled 1930s chrysler between takes. Her magic is representational, but perhaps buried somewhere in my bones, thumb-wrestling Jesus Christ. It takes a bit of smoke and mirrors to make her visible.

Situated across from Pershing Square, where you can skate tiny circles on a diffident ice rink that gets slapped down every Christmas, The Biltmore hotel is a 1920s mash of Spanish, Mediterranean, Renaissance-revival, and Beaux Arts stylings. Inside, the Greek, Roman, Castilian, and Florentine flourishes make for a cosmic latte of elegance. Designed by a New York firm, on the premise of California heritage, the building certainly falls outside the canon of Modernist wonders we generally like to show off, but Ferrer is attuned to this tension, and in fact sought it: “I'm more interested in this eclectic period of revivalism, because these buildings sit outside of the canon and distort history in many ways.”

History is written by those who control the lighting.

A Visionary Who Created a World: Celebrating the Life of Noah Davis
9/11/15
COMMENTS (0)
ArtSlant has shutdown. The website is currently running in a view-only mode to allow archiving of the content.