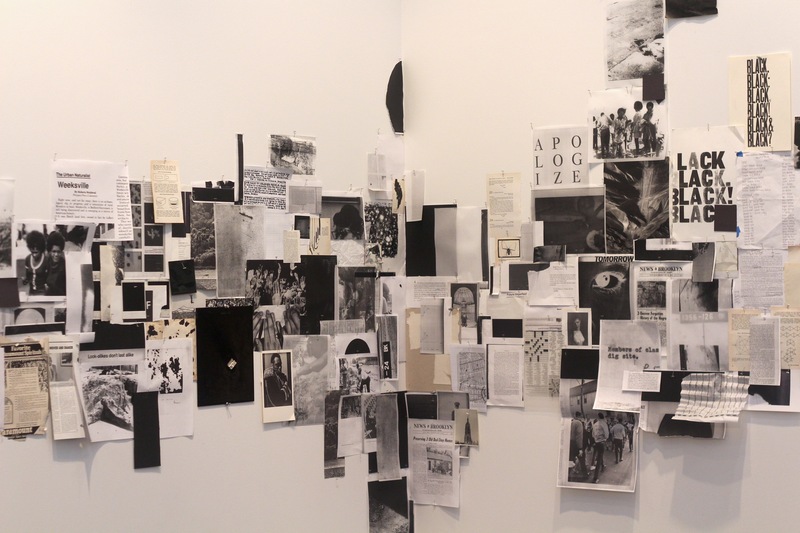 “You’re going to get me started on a rant,” Kameelah Janan Rasheed says in between laughs as I begin to ask her about America’s obsession with neat and tidy histories. “America loves a linear history and a linear history wants us to think about things as discrete events. We should instead be thinking about history as sets of logic and systems that preserve power.” It is a week before the opening of Rasheed’s latest solo exhibition, Future Perfect/indices & marginalia at The Weeksville Heritage Center in Brooklyn and it is evident that she intends the show to be one full of historical disruptions. “Funny enough, I actually hated history as a kid,” Rasheed says with another laugh.

It is difficult to find a trace of that youthful disdain in Rasheed’s work now. History is so intimately connected to her praxis. Although it is perhaps more accurate to say that it is the reconstruction of history, particularly histories outside of a white-capitalist-patriarchal framework, that most interests Rasheed. What has resulted is a body of work that is as physically confronting as it is intellectually gripping. A self-described research-based conceptual artist, Rasheed—whose artistic mediums include photography, printmaking, and installation—is painstakingly deliberate about her approach to the building of alternative canonical spaces through her art. And she is reticent to shy away from the centering of blackness in such an approach. 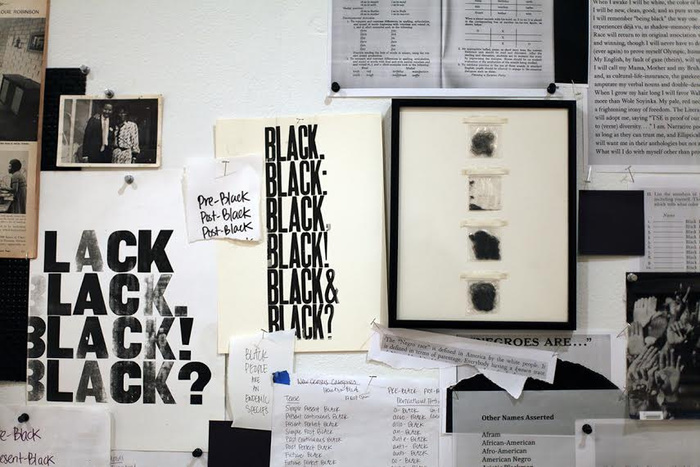 I first encountered Rasheed’s work last summer when she was part of the site-specific group exhibition If You Build It, curated by the non-profit organization, No Longer Empty. On view was her installation No Instructions for Assembly, Activation IV (2014), which served as a portable archive documenting the period of time when, as a child, Rasheed and her family were homeless. Using family photographs, texts, and other found objects, Rasheed catalogued a specific moment in her childhood, yet also asked those of us who wandered about the installation to leave behind our own ephemera. In this way, she invited multiple, disparate stories of home to exist alongside one another. This elasticity, indeed multiplicity of the archive as an artistic conceit is central to Rasheed’s historical negotiations with consequences that extend far beyond the art itself. “For marginalized communities, the archive is not merely about an artistic gesture, in many ways it is about survival,” she argues, “the question for me is always: what isn’t being documented?” 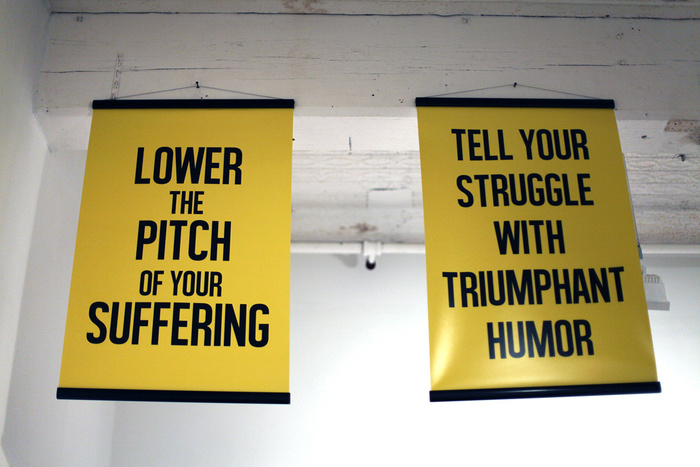 In her series How to Suffer Politely (And Other Etiquette for the Lumpenproletariat) (2014–), Rasheed targets dominant discourse more explicitly. Consisting of seven bright yellow digital chromogenic prints, the project is a tongue in cheek commentary on the failures of master narratives of racial progress. One print reads: Paddling Upstream Builds Character. Another: Purchase the Proper Boots with which to Pull Yourself Up By the Bootstraps. In their simplicity lies their effectiveness—the edicts of history never favor the poor and disenfranchised.

Thus, Rasheed charts and re-charts new maps that propose new pathways towards a black utopia. But how are these new pathways made public? What strategies must be employed in order to activate the archive? In each iteration of No Instructions… (appropriately referred to as activations), as she re-uses and re-fashions materials left by viewers while also including new objects, Rasheed builds a conduit and frees the archival material for multiple publics. The animation lives in the invitation—the invitation to contribute to the atemporality of histories, to reject the erasures of the linear. At the time of our call, the magnitude of continuing this intellectual project with the Weeksville community is not at all lost on Rasheed. “I do worry that I have overthought it to the point of inaccessibility,” she tells me. 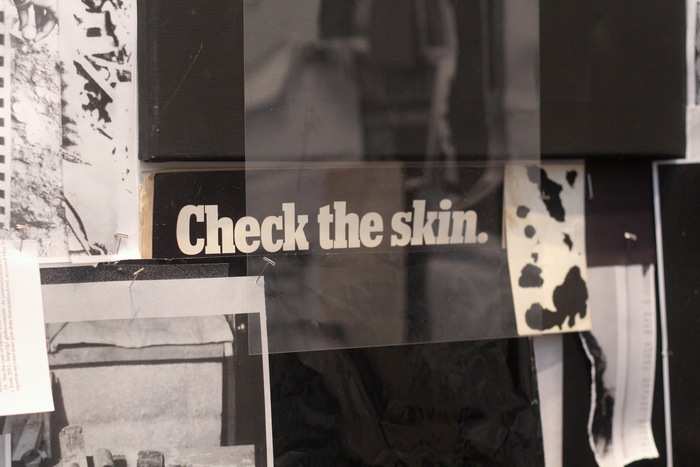 Still, Rasheed’s ideological framework is exactly why Weeksville curator Ali Rosa-Salas chose to work with her when conceptualizing a project that would make public the center’s rich archives. For those who have long debated what black liberation might look like, historic Weeksville offers some glimpses of potentiality. The heritage center now exists to connect the immediate neighborhood and wider New York City community to the largely under-told story of the vibrant free black community of 19th century Weeksville, Brooklyn. However, the task has not been an easy one. With her invitation to Rasheed, Rosa-Salas is hoping to create an intervention. She told me via email:

Kameelah's tactile manipulation of archival material (ripping, cutting, highlighting, photocopying) is to me, an act of resistance to the institutional structures that alienate the public from history that is rightfully theirs. She thinks expansively about archival sources, seeing the world she inhabits as a library in and of itself. 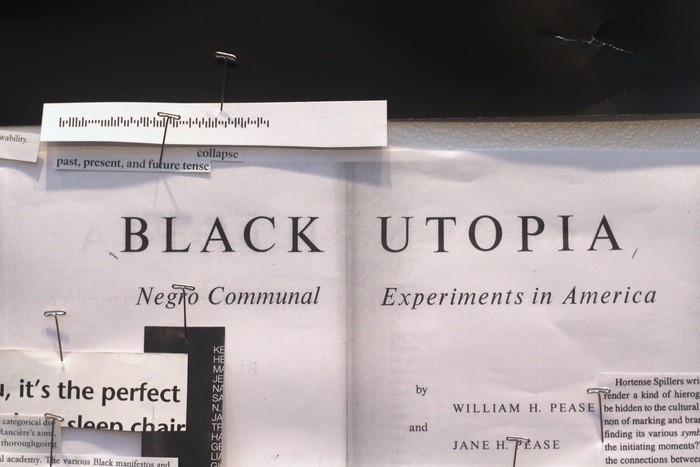 When I find Rasheed at the exhibition opening, she is readying herself for a few opening night photographs. At her back is the cognitive sprawl, as Salas refers to it, of archival material—from the Weeksville library, the internet, and other institutional collections—that comprises the largely text-based installation. It is a dense, scholarly, excavation with writings from Hortense Spillers and William H. Pease, among others, that requires me to walk through three times before fully feeling satisfied. “How do I create a black utopia?” asks Rasheed when we finally get a moment to speak. “I don’t have the exact answer to that but I see my work as a space for me to think through that inquiry taking advantage of the stimuli of the world, building relationships between systems of thoughts.”

Future Perfect/ indices & marginalia is on view at The Weeksville Heritage Center in Brooklyn, NY, until June 24th.