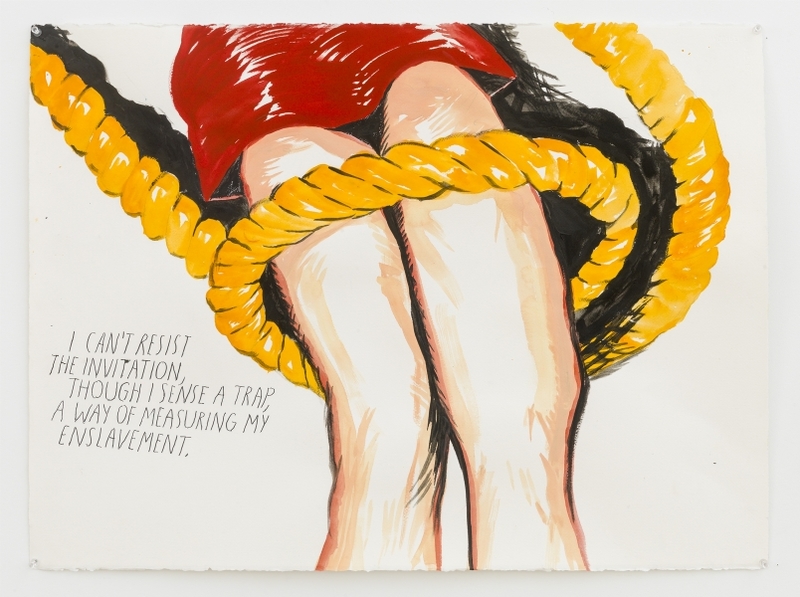 “I’m not walking down there, there’s a body on the floor,” my friend Shai said. We were coming out of a pizza place that had a gunshot mark in the TV. “Come on, it’s fine. She’s not dead.” As we walked past the disputed human being lying face down in the middle of the stenching sidewalk, she turned on her side and smiled vaguely into the distance with her elderly, meth-lined face.

Sickness is something you encounter on a daily basis in Los Angeles. Sinking below the hot hills, the community of Skid Row is a blunt reminder that America is not the socialist state some right-wingers might think it is. Walking in DTLA now it hardly feels different from the vision you get of California from Pettibon's works from the 80s. Raymond Pettibon has always captured the whole array of American sickness—mental, physical, ideological—in his art which spews over scraps of paper, as free and uncontainable as projectile vomit. He draws individual and collective suffering, struggling against the anonymous urban machine that degrades us all—a struggle that is portrayed in various works, from wrestling poses, muscular men clad in underwear, guns, ropes, fire, deranged individuals trying to escape. 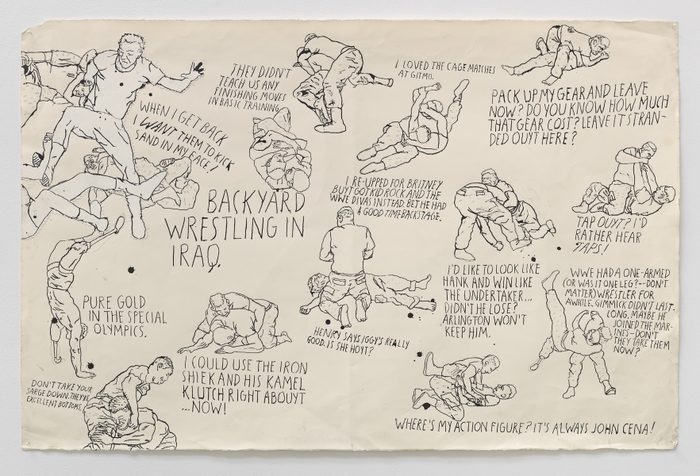 It’s astonishing that all of the works in From my bumbling attempt to write a disastrous musical, these illustrations muyst suffice were produced this year (the show opened on April 23, meaning they must have all been created in around three months). In the quantity of his production you feel the urgency and swiftness of his response to everything that surrounds him, also manifest in the amount of ideas and influences his work combines: sport, middlebrow sex, crabs, lice, violence, crime, war, politicians, capitalism, freedom, mass culture. He doesn’t stay on one subject long enough to allow the viewer the bourgeois luxury of meaning, but in each there is a repeated theme of pain. “My sole intention is to make the reader feel the hurt!”—screams a monochrome drawing, as a man raises a taut hand ready to slap down on the exposed buttocks of another. 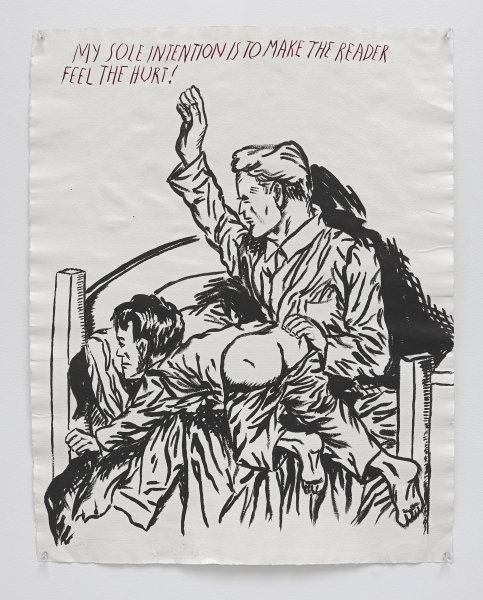 No Title (My sole intention), 2015, Acrylic and ink on paper

The connections Pettibon makes between text and image are often too personal to be understood, but then they undo each other in a way that, at times, makes you feel closer to the artist’s intention. Maybe that is a deliberate effect of the artist of the viewer, to block any presumptions, and it's never more evident than in No Title (Some try to), placed emphatically as the last or first work that you encounter in the main space: "Some try to reconstruct the illustrators secret designs with deceptive clarity, read intentions and allusions in their works." Pettibon has never sought clarity. And, "he just doesn't give a fuck," as Red Hot Chili Pepper’s bassist Flea remarks in MOCATv’s The Art of Punk. 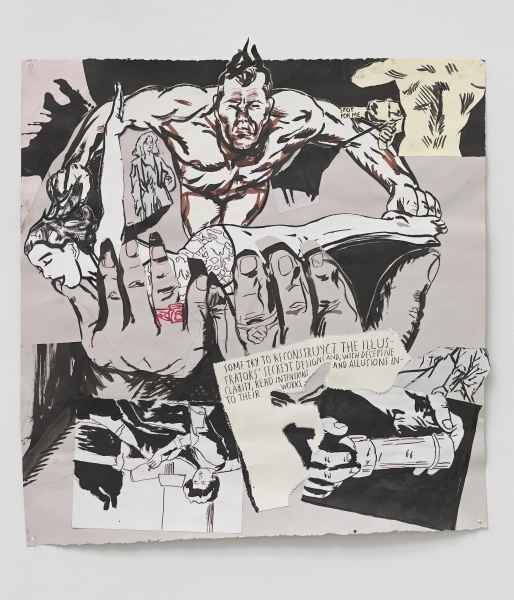 The force and spotaneity of Pettibon—seen as much here as ever, in his 10th show at Regen—is more than sickness and pain. There is also the awkwardness of averageness; the individualistic capitalist system with all its apparent freedom is tossed back in our face here. Hanging on opposite ends of the gallery are works about money and freedom: a series of drawings on capitalism on one side of the space contrast with one of the exhibition's barest images, of a prisoner behind unending bars. The text, "Let me content myself for a moment with remembering how it felt," an ambigious riddle within the work itself, forms a kind of sequence with a swathe of works alongside it depicting people who find themselves in all kinds of psychological binds, questioning our notion of what freedom means in this over-cooked money economy. 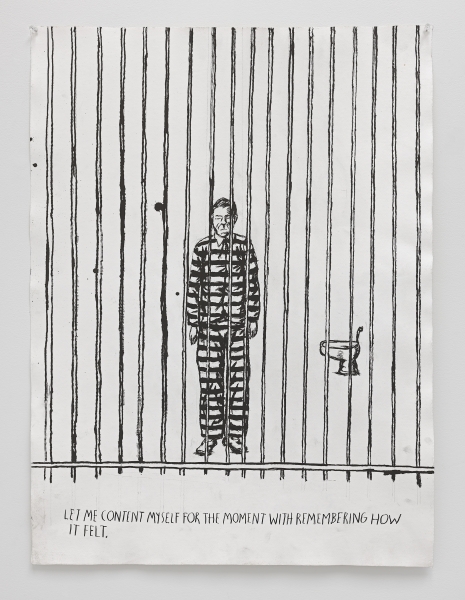 Throughout the show, framed comic strips depicting mediocre sex, drugs, and violence are disjointed, interupted from a linear flow by the way they are hung between disconnected works. But the rough, hard lines and woodish faces of Pettibon's anonymous protagonists do cumulatively narrate the middling existence, the sticky sleaze and profanity of living an ordinary life, blank people who talk cliches and vacillate between malevolent impulses to consume things, drugs, each other.

"If everyone died it would bum on the big drug companies. Capitalism needs customers, y'know."

"Piss anywhere, use the mop"

Really, it is only us at the start and the end of the cycle of sickness. Our own judgement is suspended and trapped in these drawings. It's unrelenting. It's hopeless. 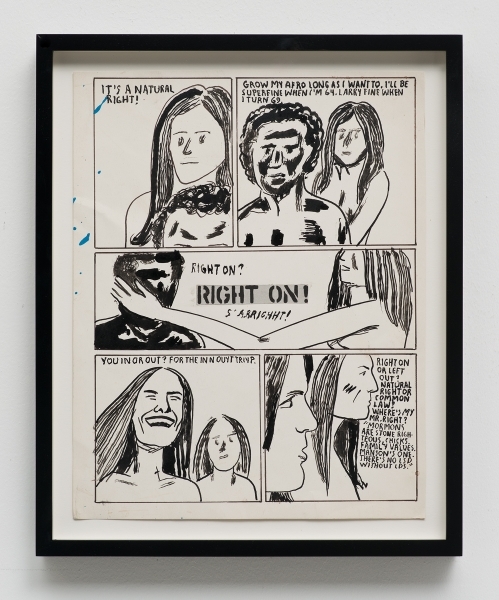 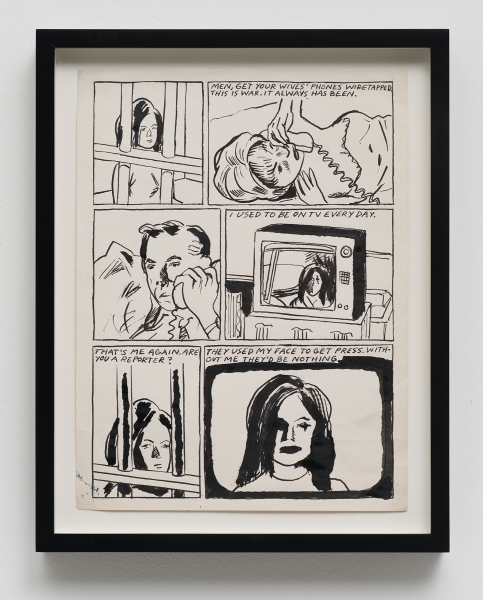 Ultimately Pettibon is anything but average. His incredible career as an artist has taken him from punk shows to public collections: it is often said that his success is thanks to the way he brings “high” and “low” culture together. But nowadays that separation isn't what it once was. The same can be said of mainstream versus underground or subculture. There are qualities in Pettibon's work that can't be sincerely repeated. But his indictment of a sick American nation is unavoidable.

(Image at the top: Raymond Pettibon, No Title (I can't resist), 2015, Ink, acrylic, pen and graphite on paper. All images: Courtesy of the artist and Regen Projects, Hollywood)