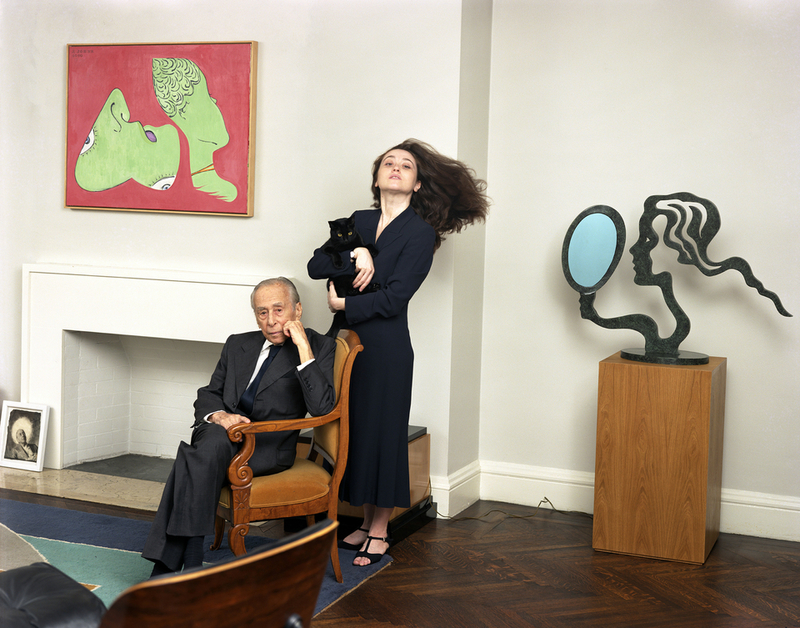 Chronicles of a Fleeting Culture

Famed for her portrayal of the upper class in New York, New England, and Long Island, Tina Barney’s work is an ethnographic study of the bourgeoisie. The eleven works on view in this retrospective are snapshots from a play where if one stares long enough, one might hear the muffled dialogue of Barney’s subjects travel through time. With shots capturing characters in mid-motion, such as The Reception (1985), the viewer is pulled into the scene right before a significant event is about to occur. At first glance, words like drama, money, and glamour come to mind. But while the surface is relucent, there’s a heartbreaking vulnerability underlying each composition: the women's faces are marked by a palpable melancholy.

In Jill and I (1993) the protagonist at the forefront stares with haggard eyes that betray a disenchantment no amount of money is able to mend. With Lipstick "New York Stories, W Magazine" (1999), two women appear to be getting ready for a night on the town. The younger one stands in front of a mirror applying lipstick with a nonchalant gesture denoting a daily routine. The other is seated, staring at the camera, making a humorous face that isn't enough to mask her vacant glance. Everyone is dutifully reading the lines of a script that was handed to them at birth, along with the silver spoon in their mouth. 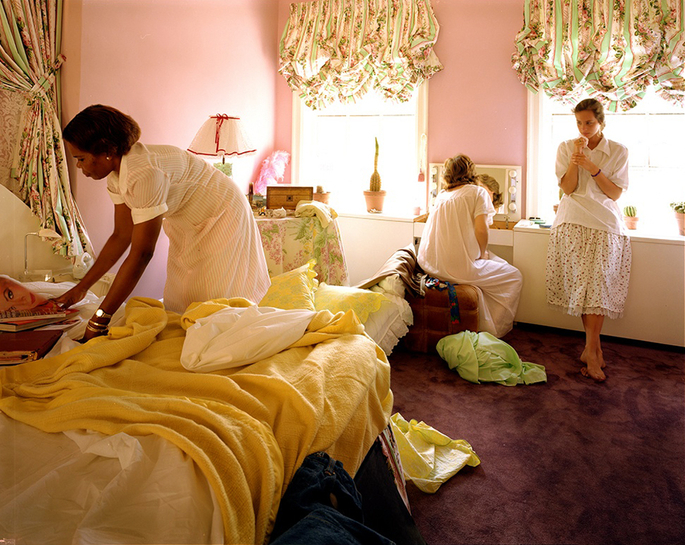 In Beverly, Jill, and Polly (1982), the stage announces a play where racial and socio-economic codes of conduct dictate each character’s behavior. A black maid leans over a pile of magazines tossed on the wrinkled sheets of the bed she is about to make. Set around the time when the “Black is Beautiful” movement had started to fade, her gaze is fixed upon a page where an airbrushed white woman with cherry lips and long black lashes silently dictates the standards of beauty. In the background, Jill sits at her vanity station following the rules set forth by the woman in the magazine. Polly stares into the distance; her gaze betrays ennui. All three women are caught in their solipsistic moment amidst a bedroom floor rampant with a mess that mirrors their class-based entrapment.

Flash forward 24 years later, The Limo (2006), portrays another dynamic, this time between two males. On the right side of the frame sits a white man in a grey suit with peroxided hair and designer shades that make it unclear where he’s looking. His crossed legs and hands betray a lack of assertion. On the left, a black man wearing only a blazer—identical to the man sitting next to him—locks eyes with the viewer. With his open arms and legs, he dominates the interaction.

Amidst this sea of faces adorning the walls of the gallery, one recognizes Leo Castelli who brought to light Roy Lichtenstein and Richard Serra, among others. In Mr. and Mrs Leo Castelli, W Magazine (1999) the gallerist and art collector is seated in his home, surrounded by pieces from his pop-art collection. He stares with an authority akin to that exerted by heads of state. Mrs. Castelli stands behind him holding a black cat that matches her outfit. Caught in the midst of a hair toss that echoes the sculpture behind her, she could almost be a Lichtenstein girl. 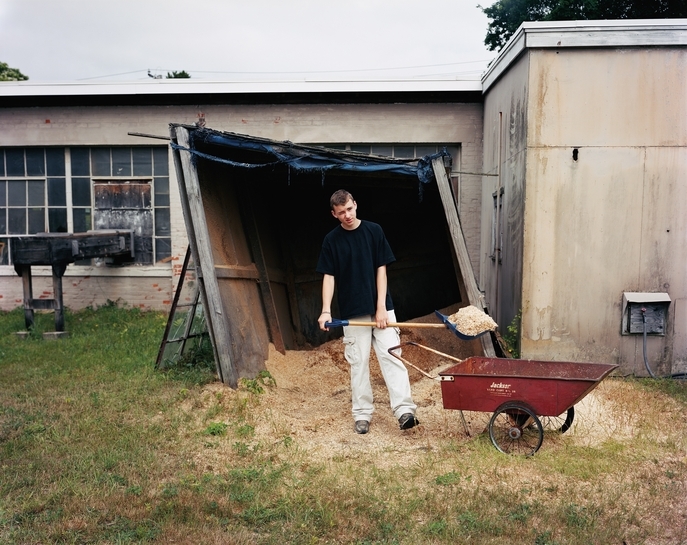 Hung on the back wall of the first room, The Wheelbarrow (2005), taken from the series Small Towns, makes a noteworthy statement by being the largest print in the show. Unlike Barney’s earlier work from the eighties and nineties featuring members of her immediate circle shot in opulent indoor spaces, this image of a resident of Westerly, Rhode Island, is devoid of lavishness. The setting is rural. A young man is standing behind a wheelbarrow, holding a shovel full of dirt. By highlighting this piece in the display, the artist implies that her work isn’t a mere comment on wealth. Rather, it is an ode to traditions, and a relentless quest for an elusive Americana.