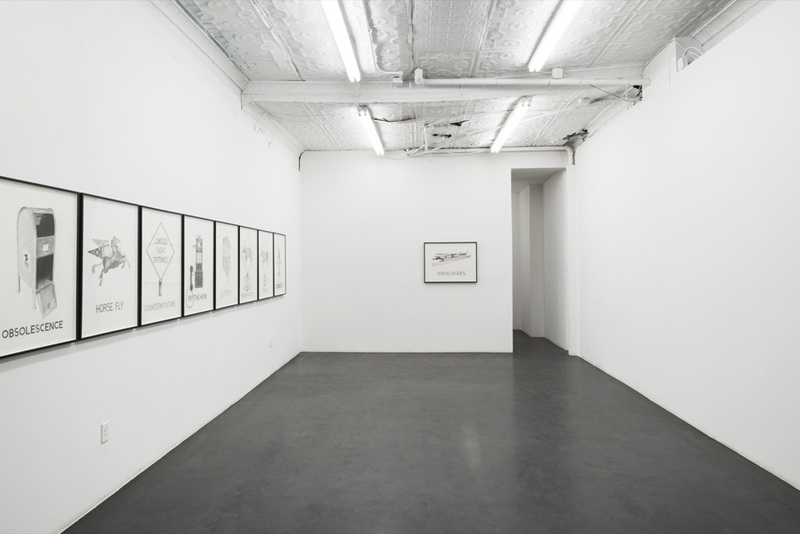 It deserves attention that with Frieze Week underway in New York, Essex Street would open an exhibition of an anonymous artist. Late Work by Vern Blosum—a pseudonymous painter associated with the Pop Art movement, though never officially canonized—features the only work produced by the artist since his appearance in exhibitions from 1961–64. This work, which was shown again to the public in 2013 after being rediscovered by gallerist Maxwell Graham, among a few others, is familiar to those who know his graphic image and text pairings within a contemporary context, though not as historical markers.

This slippage is common for Blosum’s work. Resurfacing only recently, his compositions fit non-anachronistically within a brand of irony commonly found in contemporary painting. Here, allusions are met with puns, and the image referent included with the text is always slyly undercut by its caption. While the work only once appeared contemporary, the exhibition currently on view is recent—all supposedly produced in 2015. Blosum’s work appears before us, bold and challenging, clinical yet sentimentally handled, not as a progression of a practice produced over a span of nearly 60 years, but as a radical jump in time that conducts business as usual. Where the work from the 1960s was forward-thinking, sharp, and speculative—a type of pre-irony that was done in earnest—viewing Late Work now, in the year it was made, Blosum’s instinct seems just right. 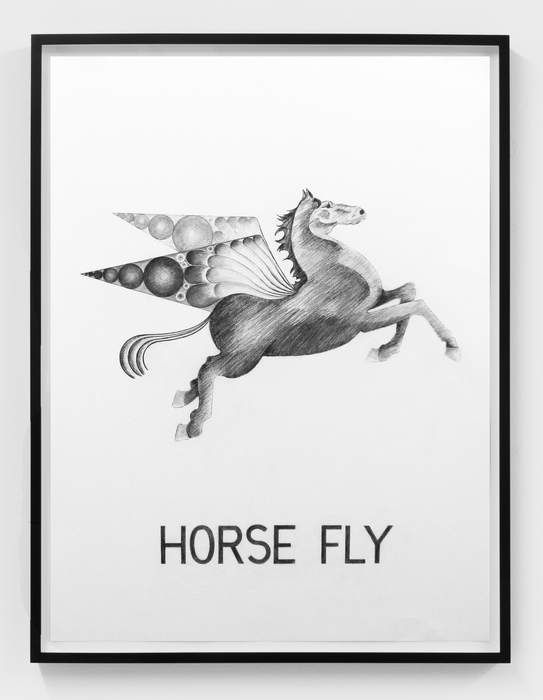 While a critique of the work as counterfeit seems immediate and plausible—the artist conveniently reappearing on the scene to fill a market need—the work deserves more than this facile read. As an artist whose name has been reduced to a symbol of his work, it makes sense to begin with how Blosum’s images are viewed. While the digital documentation of his pieces appears incisive, deliberate, and sterile, there is a wavering element to the surfaces of the paintings (their faulty corrected graphic lines, their stuttering gradients) that betrays their immaculateness. These falters are not calculated, but are symptomatic of accidental errors, moments where perfection is approached but unmet. This affective quality is more revealing in this exhibition, where the gallery is lined, quite simply, with a collection of black framed graphite drawings on paper, installed at equal height. The subject matter is quite pedestrian—a term that registers as a double entendre Blosum is keenly aware of—featuring multiple iterations of shallowly drawn road signs, mailboxes, fire hydrants, and telephones. While the depicted objects are common and everyday, so is their regressive reference to the commercialism of Pop style. 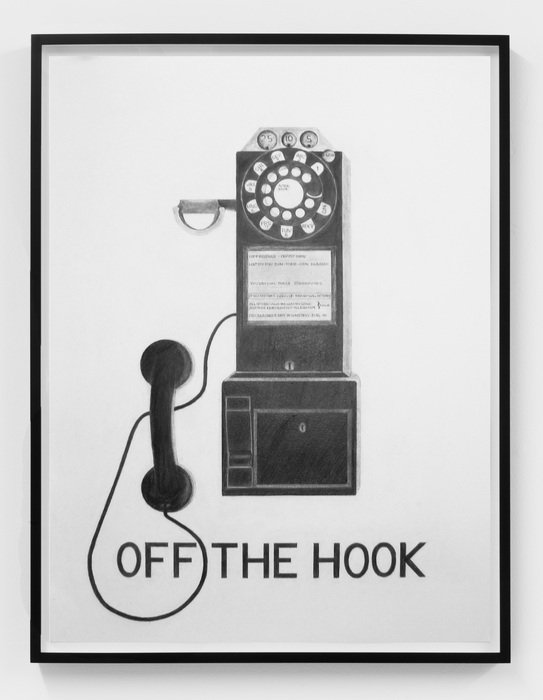 Vern Blosum, Off The Hook, 2015, Graphite on paper

The idea of Blosum, not as only an artist but as a facet of the work itself, is less elucidatory if he is framed within the realm of the objects he paints. As a type of platonic shadow, the imagined personification of Blosum erases the necessity of a fixed opinion on his character. Just as he places objects within a white field—a placeless and timeless backdrop of blank canvas or blank paper—and labels them for viewers, he too is placed within this blankness. Emptiness here does not necessarily constitute a void, as this whiteness is not an unfamiliar backdrop. The seemingly space-less environment of these drawings is a Pop preset—the pure surface of Warhol’s silver paintings met with the attitude of commercial advertisement and product design. What would Blosum’s caption be? 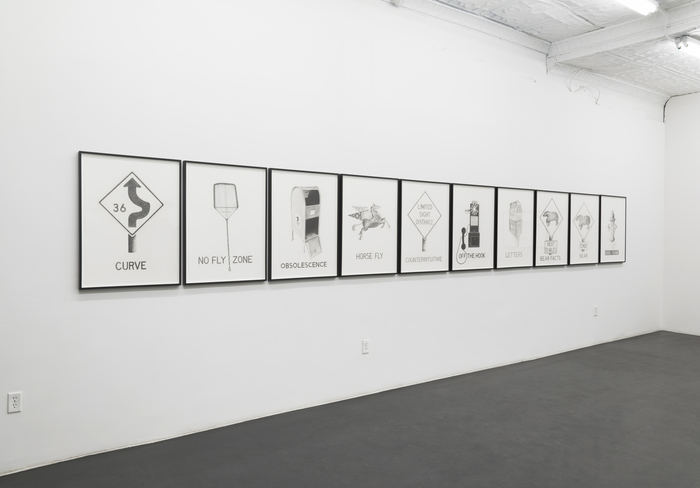 Beyond Pop, there is a sort of incongruity to the correlation between the written word and its accompanying representation that recalls Magritte—Blosum’s formula is nearly synonymous with The Treachery of Images—but is redefined by his almost outsider treatment of materials and modestly chosen texts. The taglines used in Blosum’s work are not sophisticated enough to illicit the simulacra of the objects he draws; the effect of image/copy is lessened by the front of his persona. These drawings adhere to a standard that is completely reproducible out of necessity. In Horse Fly—the most adventurous piece in the exhibition—a mythic energy appears to radiate from the winged figure in the center of the page. The horse is, of course, a symbol that is interchangeable with Blosum himself, a specter of strategy that contemporary art passes through. The work is only difficult to trace if its value is defined by the role of artist that supposedly created it. There is no such thing as fake, only presets where truth means different things. Whether visible or not, the Trojan Horse still rolls.