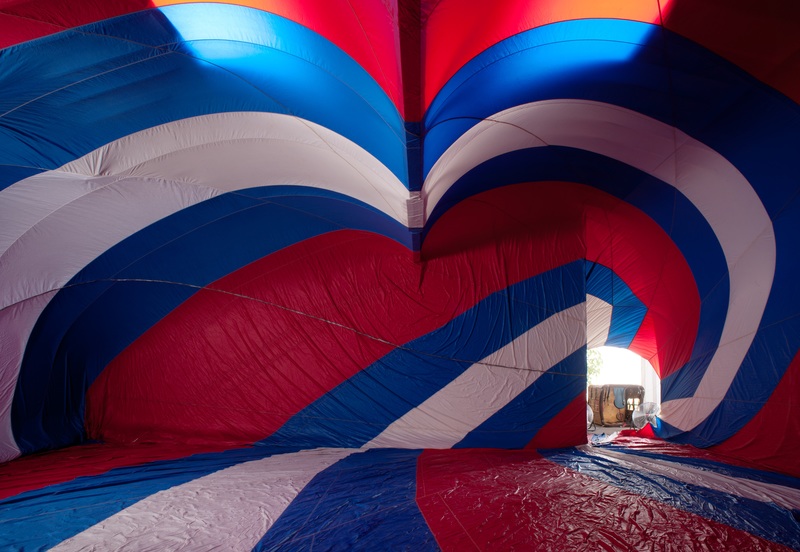 Stratospheres of experience have been described in art since the early narratives of heaven and earth. Since Biblical cosmology, our understanding of time and place has been oriented according to predetermined concepts of measure—even time is an invented unit. But how do we measure the intangible? In a system where contemporary art is increasingly judged by scale, how do we quantify the poetics of experience? 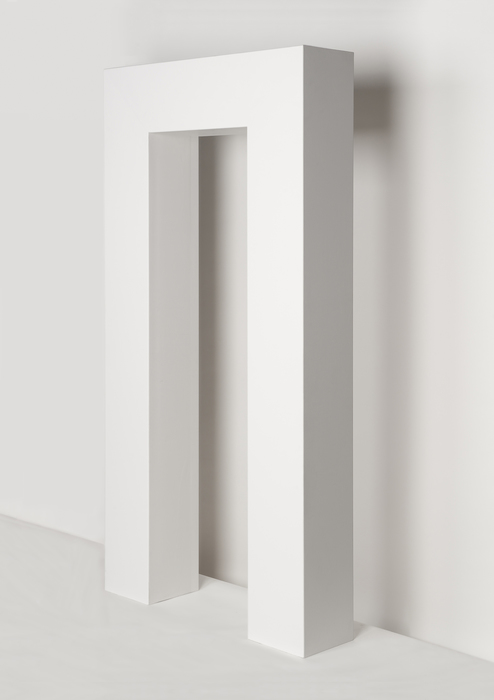 S, M, L, XL, currently on view at the Museum of Contemporary Art Chicago, manifests this question. This is Chief Curator Michael Darling’s most impressive group exhibition since The Language of Less: Then and Now, which took place at the museum back in 2011–12. The exhibition, which features just five sculptural works selected from over five decades of art since the 1960s—many of which could surely fit a curatorial scheme as broad as scale—does not feel empty, but is rather a considered, sober, and challenging presentation that rethinks how size influences our interaction with art objects in the twenty first century.

Here, forms are presented as they ought to be—meaning that the works and their intended use value serves their purpose. This use is not always function. In a close attention to form, Darling carves out space to consider the relationship of scale to other, less quantifiable categories of feeling—the viewer’s body in space is as equally a subject as the sculptures in the show; the individual affects resulting from the installation range from compression, to anxiety and surveillance, freedom and elation. While S, M, L, XL certainly compartmentalizes the public negotiation of sculpture in a physical sense—which has become quite familiar within an institutional setting such as the museum, ever striving for engagement—it also points toward the desire for the incorporeal affects of sculpture. Between the thing, and its subjective interpretation, this exhibition inserts itself as a necessary link to installation-based practices. 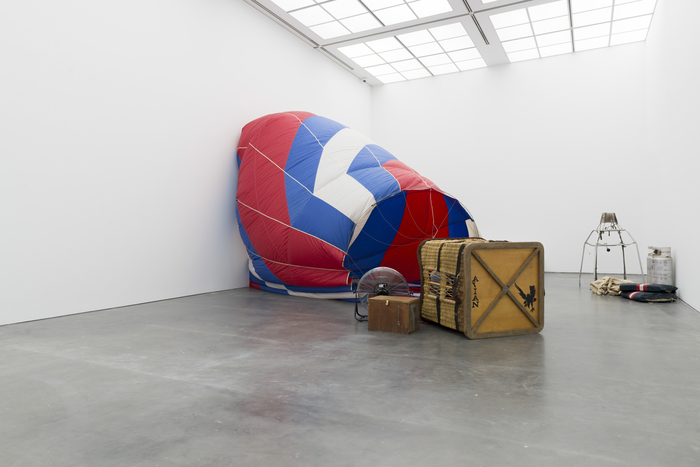 The title of the exhibition is in reference to an eponymous publication by Rem Koolhaas for the OMA (Office for Metropolitan Architecture). While Koolhaas’ book frames contemporary architecture through the explosion of the market economy in the face of globalization, the exhibition’s only shared tenet is a similar organization—a type of chronology—through scale itself. Where essays in the publication were sorted by length, here too are the pieces placed inside the gallery in the order of how they are experienced, with size in mind. The first work is Robert Morris’ Portal (1964), a signature freestanding passageway that was also included in The Language of Less. Indeed, minimalism is an essential entry point into an exhibition that aims to address the “accessibility of sculpture,” a goal that is cited in the press release, but is also shared within the interactive expectation of the works on view. 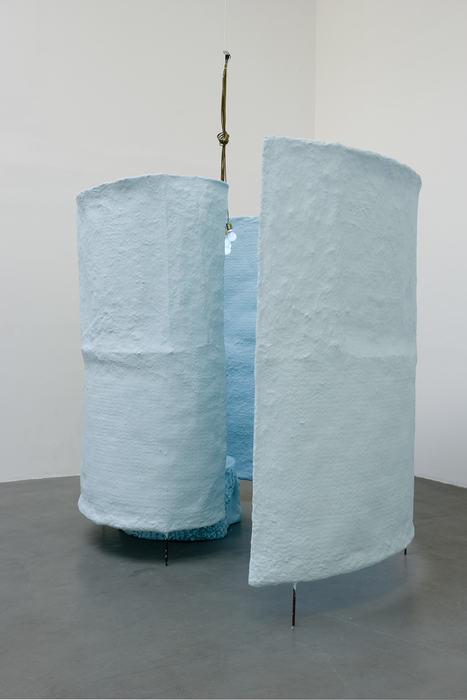 In Portal, as with all the works included in S, M, L, XL, the concept of crossing a barrier into another state (which is not always altogether transformative) is consistent throughout. To the right of this piece, Franz West’s Blue (2006), viewers cut around the crude baby cerulean plaster screens into a small cavernous space; a seat rewards viewers who make the effort to enter—pale pastel light bulbs delicately guide the viewer’s gaze upward onto the wires, intertwined. Departing from the Koolhaas publication, which focused on the permeation of globalism, Darling instead refocuses travel as an act that can happen in the smallest of spaces. An individual in space can cross boundaries without moving if their mind is positioned correctly; an experience in the gallery can cut across oceans if the perception is right. This sense of existential freedom is illuminated in a work by Kris Martin, entitled, T.Y.F.F.S.H (2011)—an acronym for Thank You For Flying Sies + Höke, a nod to the artist’s Berlin gallery where the piece was first shown. Viewers enter the piece through the wicker basket of an iconic hot air balloon, installed through a doorway with fans so that the fabric adapts to line the museum walls from floor to ceiling. 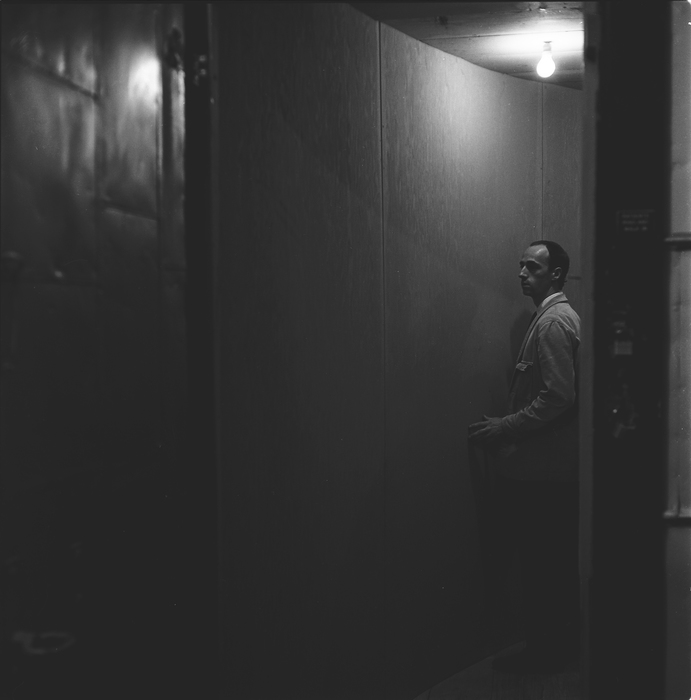 Within this purposefully anachronistic symbol of travel, the inside of the installation functions as an aphorism for a psychedelic trip, where the lines and stripes of color one would typically recognize from afar on the horizon line twist and warp within the gallery. The final piece in the exhibition, another Morris work entitled Passageway (1961), offers a similarly psychotropic experience, though in much simpler terms. Strictly viewed one at a time, the piece consists of a grey doorway down what appears to be a curved hall. Walking into the piece, with slow and metered steps, the walls constrict ever so slightly, the path becoming subtly narrower—not in a way that is visibly identifiable, but is rather felt. The pressure on the body in this exhibition is a poetic distancing from sculpture as pure form, though its means are stark: maybe travel takes you somewhere or nowhere.