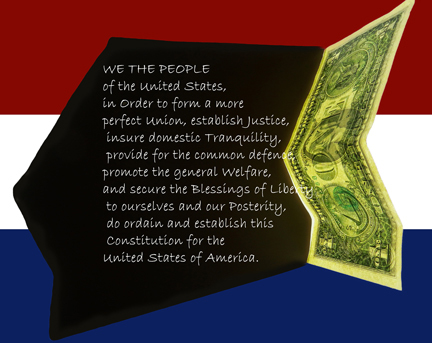 Contemporary art and social activism often swim in the same waters.  The connection crosses borders and decades, as creative individuals—in art and literature, performance and song—have given voice, sometimes the only one, to victims of turmoil and iniquities.

Curator Lawrence Cappiello, the executive director of AGNJ, has created an impressive, thought-provoking and diverse view of subjects and images  "not intended to support any of the causes which artists are highlighting in their work," he states, "but to point out that this incredible outpouring of creative energy by contemporary artists is indeed happening and directing the eyes of the world to the many world events that should either alarm us all or demand that we add our voices to the growing chorus." 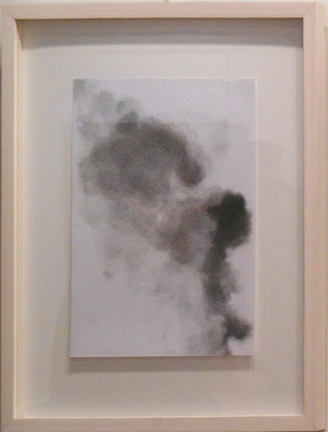 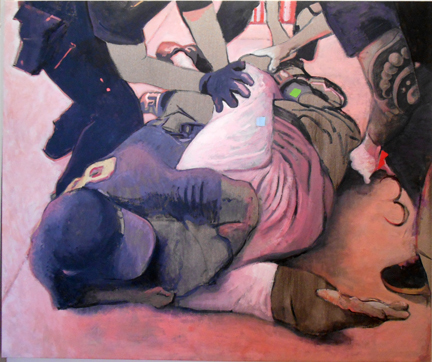 Aritsts Marsha Goldberg, whose delicate graphite drawing belies its violent inspiration, and Joanne Olivier, represented by several large paintings, including the powerful Chokehold, both stated that they were moved by some of the images that relentlessly confront them from new media and an always-on information age. 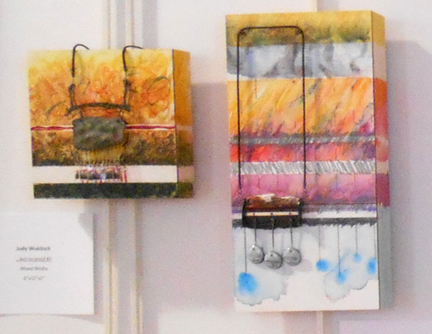 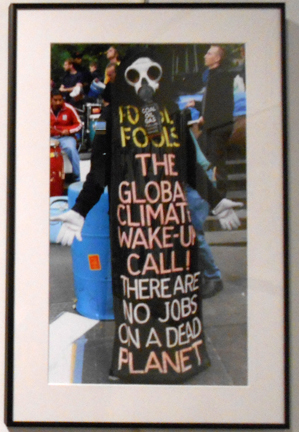 Judy Wukitsch's jewelry and painting assemblages were also meant to memorialize victims about whom she read in the news.Elizabeth Niesuchouski's digital photographs respond  to protestors she encountered, while Luis Alves re-imagines and reconfigures posh advertisements to deliver totally different messages. 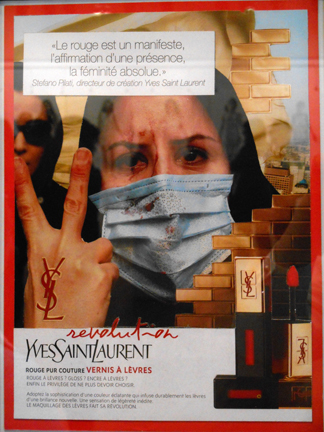 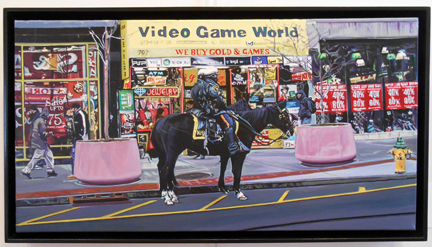 Photographer Adel Gorgy's stark yet subtle black and white image, Apartheid, seems to depict a frame of mind, rather than an individual, and in Money Casts Dark Shadows, (shown at the top) he reacts to the Supreme Court's decision that corporations are people. 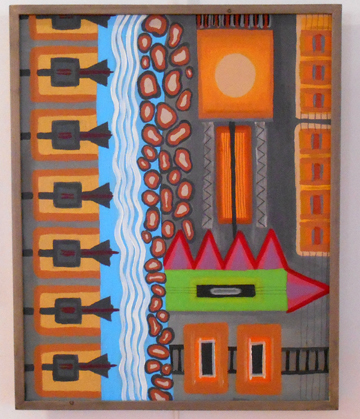 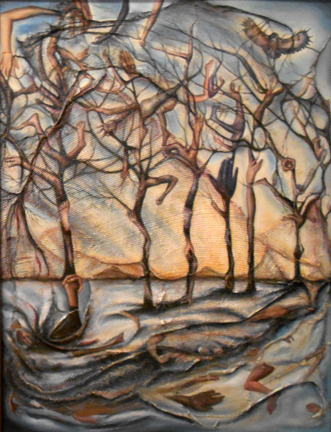 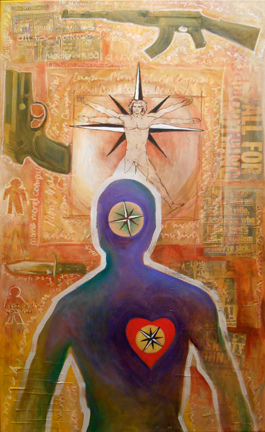 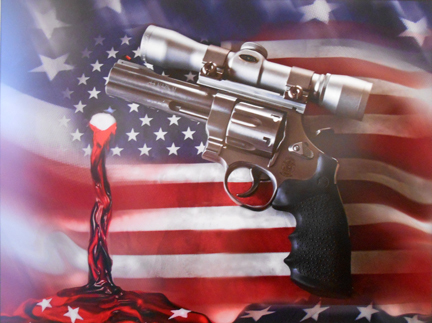 Painter Len Merlo presents elegant, colorful abstractions that almost seem playful till you see that they are about fracking and its consequences, Joan Sonnenfeld presents and apocalyptic landscape in Garden of Lost Limbs.  A powerful juxtaposition, Nick Rosal's complex painting, Get Rid of Old Friends, a response to the horrors of school shootings hangs next to Richard Earl's digital image, The Right to Bear Arms. 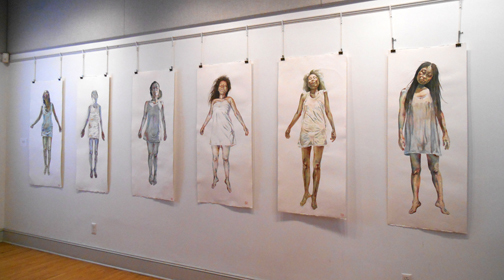 Steve Cavallo's series of arresting watercolors, Between This World and Hell, is his response to victims of war crimes, bringing their suffering to painful visual reality. 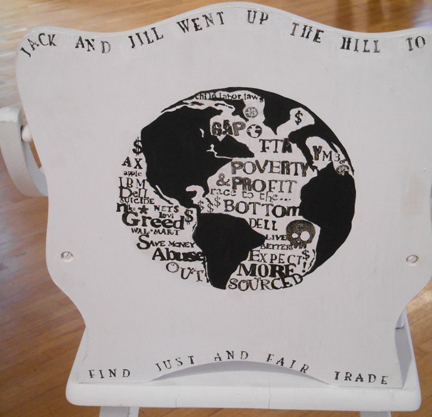 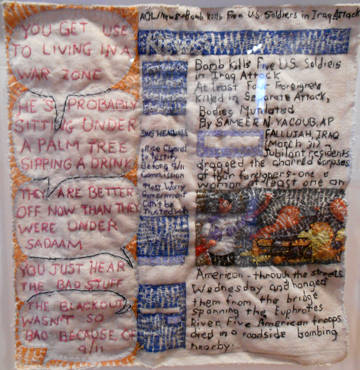 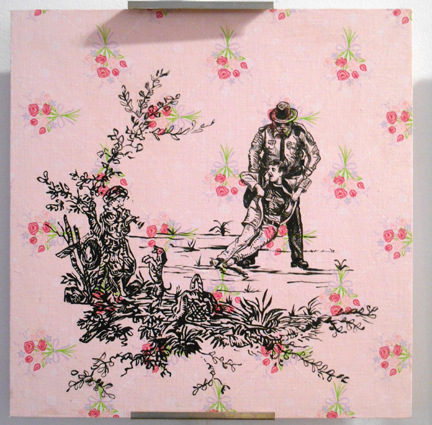 Colleen Gahrmann's ceramics/assemblages give a quieter, but not less thoughtful expression to issues of gender equality, fair trade and food supplies. Patricia Dahlman's dense, textual embroidered surfaces require slow, close viewing, and the length of time needed to create such works testifies to the depth of the artist's response.  In Margaret Murphy's almost quaint paintings on printed toile fabric she creates tensions between the violence of the image and the chosen medium.  Jane Caminos' vibrant, compelling paintings come from a series "On Women Bound" in which she responds to oppression and the bravery needed to break free. 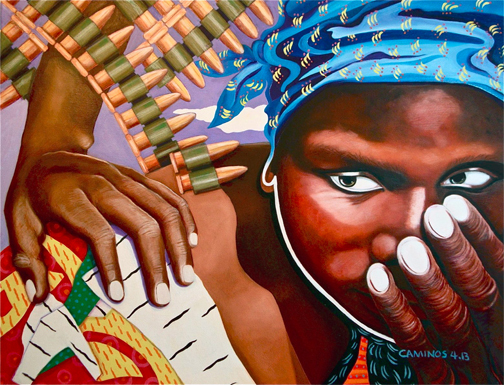 While art on difficult subjects like these is important, it's not always easy to see.  Cappiello, who possesses a skilled curatorial eye, has succeeded in a difficult task.  Because he has assembled works by such accomplished artists, whose work is first beautiful and then political, it's an exhibition that enriches rather than enrages.  Anyone can get angry.   We all react.  But when confronted with intelligent, compassionate works of art, we can also become inspired and enlightened.  Issues is an exhibition that will open eyes and, perhaps, new ways of thinking.

Mary Gregory is a New York arts writer whose work appears regularly in newspapers and magazines.