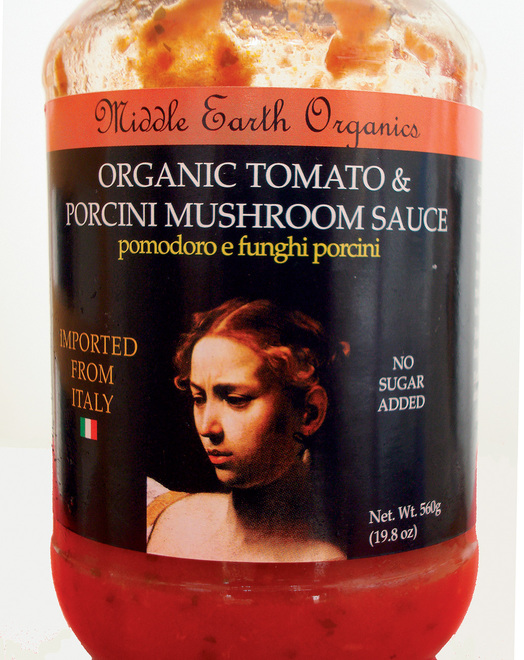 The Truth Behind the “Judith Beheading Holofernes” Pasta Sauce Label

A jar of pasta sauce recently came to our attention when it went viral, at least among guffawing art history majors on Facebook, who were compelled by the droves—likely due to our desperate desire for validation—to click on this blog post evocatively titled “Why This Company Desperately Needed to Hire an Art History Major.” Oh yes, we collectively clamored, here’s a circumstance when our expertise surely would have been of use.

Speculation circulated as to the intent of the label, which features a detail of Caravaggio’s 1598 painting Judith Beheading Holofernes. The detail just happens to crop out all the gore of the painting—the brilliantly bloody, spurting, streaming, juicy gore—in favor of a close up of Judith’s face. Without the context of carnage, she does appear, as the blog post suggests, to be merely “looking down at a big pot of organic tomato and porcini mushroom sauce, pondering if she needs to add more tomatoes or porcini mushrooms.” (The slight affect of dismay on her face, now that we think of it, is quite out of proportion to the butchery she is performing in the painting.) 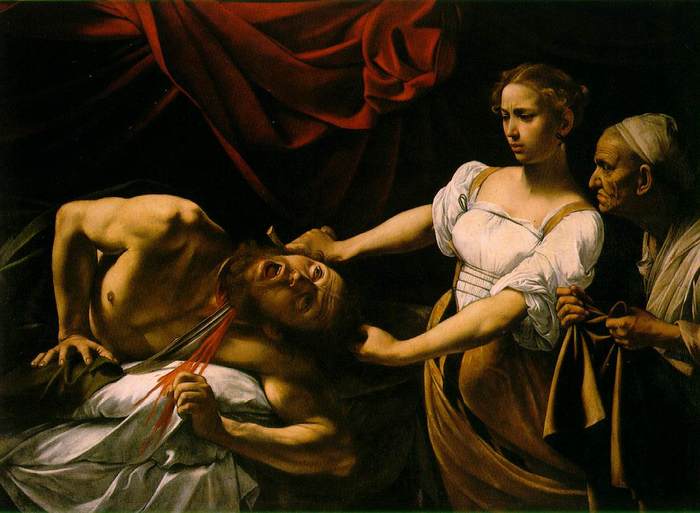 The blog post purports that this flagrant misuse of Old Master painting could have been avoided, if only the company had an art history major on staff, who would have surely informed the CEO of the context of Judith’s nasty undertaking, and steered the company toward a more suitable image for a tomato sauce label. One without all the, you know, homicidal horror. As one Facebook commentator astutely pointed out: at least the sauce doesn’t contain meatballs.

But the premise didn’t add up—it couldn’t. How could they not know the lovely girl in the painting was actually “mid-decapitation”? It must have been intentional. Did they just think we wouldn’t make the connection? Is it an inside joke?

Being the indomitable scholars that we are, we decided to investigate.

The Caravaggio sauce is part of a line of tomato sauces distributed by a company called Middle Earth Organics.[1] You can read about their sauces here. Each variety of sauce bears on its label the image of “a Renaissance woman,” Robert Reiss, who started Middle Earth Organics about 12 years ago, told us. “You have your Botticelli, Raphaello, Leonardo,” he rattled off the names with a practiced Italian accent, rolling his r’s with relish, “and well, I’m a huge Caravaggio fan.” So they had to have a Caravaggio, too. But finding a suitable Caravaggio, one that wasn’t too dark or sharply chiaroscuro, was a challenge. Judith was simply the best candidate.

As for the incongruous subject matter? “It never even occurred to me!” he laughed. Reiss said, in all honesty, he “paid no attention to the subject matter” of the painting, and in 12 years “no one ever said anything about it.”

The sauce was even featured in an Art in America article in December 2010, exploring the “Caravaggiomania” phenomenon, noting the “label of a blood-red pasta sauce” bearing the head of Judith, but not delving into the distasteful connotations of its use.

The question then: did this company desperately need an art history major? Yes, and no. Reiss is, in fact, an art history major, from Princeton no less, and studied German Renaissance sculpture in Germany on a Fulbright scholarship before studying Philosophy at the University of Pennsylvania. He attributes his use of the Renaissance art-inspired labels with the brand’s success in upscale grocery stores like Whole Foods. “I know what I’m doing when it comes to art history,” he said, pointing out the careful attribution to the paintings on each label. But this art history background didn’t make him think twice about using a detail from a painting depicting a horrifying and vengeful murder to adorn a food product.

This separation of subject matter from artist is, I think, characteristic of those of us who study art history. We are all too often desensitized to the subject matter of the art we look at. A Caravaggio is a Caravaggio, after all. So, perhaps, what we really need is a comedian to point these things out to us.

[1] For those of you wondering about the Tolkien reference, the name “Middle Earth” actually refers to the translation of “Mediterranean.”