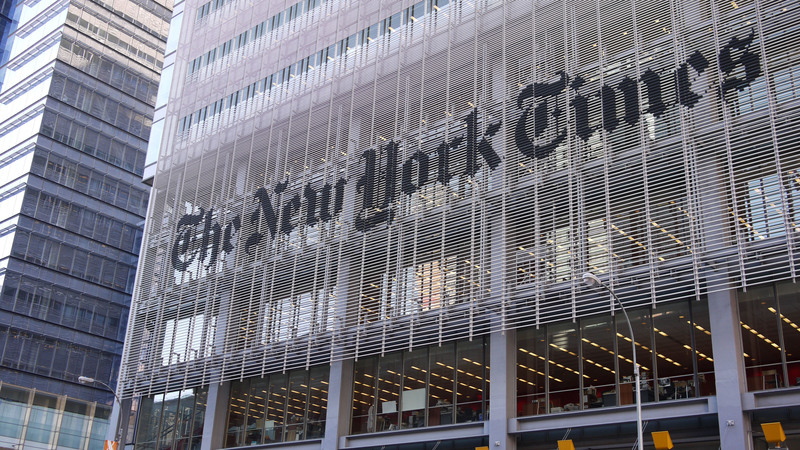 The Changing Treasons: It's Time for New York's Leading Critics to Surrender Their Crowns

It is an astonishing peculiarity that in New York there is just one newspaper setting the tone of cultural opinion: The New York Times. There are others, of course, but they haven’t a fraction of its influence. There is no audible counter-argument. Conversations on the street rarely begin, “Did you see that thing in the New York Observer?” Even national papers such as the Wall Street Journal and USA Today are unable to penetrate the shield that the New York Times has formed over the city, despite those papers outselling it. The extraordinary absence of an alternative equal has positioned the Times as a cultural dictatorship, placing it at odds with the vibrant multi-facets that constitute one of the greatest cities on Earth.

In stark contrast, Londoners consume no fewer than five major newspapers, currently or formerly in broadsheet format—though these are national publications as opposed to the ostensibly regional New York Times—and for the purposes of this article it is worth noting how many of them have art critics. The Times (the 1785 original) employs Rachel Campbell Johnston, with Waldemar Januszczak at the Sunday Times; the Guardian/Observer has Adrian Searle and Jonathan Jones; Richard Dorment and Alastair Sooke are at the Telegraph, with Andrew Graham Dixon writing for the Sunday edition; the Financial Times has critic Jackie Wullschlager; and until a recent monstrous cull of its arts section the Independent had Charles Darwent, though the paper does still cover contemporary art. Additionally, the London Evening Standard—which will always be identified with outspoken critic Brian Sewell—currently retains Ben Luke, while in Scotland, the Scotsman relies on Duncan MacMillan and Moira Jeffrey.

UK newspapers are increasingly moving writers from staff to freelance positions—an important distinction—but the larger point is that there remains a democratized journalistic field of national art critics producing varied discourse—between rival newspapers and readerships—healthy competition, and choice. While the Telegraph enjoys the highest circulation, the perception is that no newspaper vastly outsells the others in terms of cultural real estate. The benefit to artists is the breadth and depth of intelligent coverage, the expanded possibilities of being reputably reviewed, and a certain liberation from any one of these papers bestowing its critical largess as a defining gold star of approval.

In New York, the city’s hallowed conclave of top art critics who are read by and beyond the art world, are restricted to the New York Times and one or two revered magazines. The Times’ current murder of critical crows is headed by co-chiefs Roberta Smith and Holland Cotter. Smith has presided over New York’s artistic kingdom by covering the subject for almost three decades at that newspaper. In terms of monarchic rule, hers would be the 14th longest reign by a living sovereign just ahead of Mswati III of Swaziland and just behind Sheikh Humaid bin Rashid al-Nuaimi of Ajman (United Arab Emirates). Smith has steered her critical barge with a reliable hand as standards have sunk around her due to marauding online opinionators (as everyone is now a photographer, so too is everyone a critic) and her writing remains insightful. Holland Cotter and Ken Johnson are by virtue of their writing and their positions at the Times, held in esteem, although Johnson has recently been the subject of some controversy.

At the New Yorker, Peter Schjeldahl was installed in 1998, and his cartridge appears to be running low on ink. In a recent review of the exhibition The Forever Now: Contemporary Painting in an Atemporal World, he declared it understandable but “too tiring” to resist some of the most appalling sewage to stain MoMA’s walls in years. If ever there was a time for him to do his job and repel such effluence, it was then.

And mention ought to be made of the seemingly terminal literary decline of Jerry Saltz, critic at New York Magazine, whose infantile rantings include a fanatical expletive-laced diatribe against British artist, Banksy, and a disgusting Twitter tantrum about a fellow Acela passenger who displeased him. As the Pied Piper of self-promotional idiocy his antics are an arrant disgrace to New York’s critical field, displaying utter disrespect to the artists and art writers of later generations who work so hard to remain here and whom he, by his regrettably high profile, indirectly represents. With his recent suspension from Facebook, Saltz’s readership must see the deteriorating writing on the wall—and Banksy isn’t the culprit.

But quality is not the issue. The insufficient number of influential critical positions in New York renders those few extant jobs more important than they ought to be. It is the excruciating longevity that these people have clung to in their current and previous roles that sets such a dangerous lock-down on cultural privilege. Perhaps some of the British newspaper critics have been in their positions overlong, but their quantity lessens the issue.

It cannot be for one person, or a knighted few, to be exalted into such positions for decades. Remaining in place with such disproportionate sway for so long conveys breathtaking egotism on their parts and total complacency by their employers. There are many younger voices capable of taking up these rare and mighty quills.

As a reflection of the constant evolutionary brilliance of this city’s art scene—and as it is the most widely regarded arts section—all of the Times art critics ought be rotated every five years or so, and perhaps also at the New Yorker. The suffocating presence of Smith, Cotter, Schjeldahl, et al. represents a sepulchral blockade to new ideas. In addition to Smith’s stunning duration, Cotter has been at the Times nearly 25 years, Johnson is coming up on two decades, and Schjeldahl is approaching his 20th year at the New Yorker. Add to that their time at other publications and collectively these life members of the cultural one percent have been writing for over a century with generations of artists required to parade beneath their calcifying watches. (A note of criticism regarding his well established peers came recently from Yale School of Art dean, Robert Storr, but considering that he sits within that advantaged authority himself, his tone sounds dated, and his words lack urgency for the present or future, reading as a mere storrm in a teacup over a pinch of saltz.)

The art world today is one barely recognizable to the one these writers entered so long ago. Now the largest private galleries possess greater floor space than major museums, whose exhibition programming apparently follows in these galleries' outsized footsteps; money trumps all to a towering and damaging degree; internet transactions and social media disseminate new art and discourse—of varying relevance—at breakneck speed as artists, exhibitions, and trends rise and fall on daily tides of relentless information. Experience can ultimately be no match for the vigor and stridency of such change, especially in a city built upon it.

These critics now are as stubborn caps on the wells of artistic roil, keeping geysers of enlivening commentary under the rigid containment of their own preferences. The monopolistic taste-making dominance of the New York Times is hardly these contributors’ responsibility, but the wellbeing of the art scene they preside over is; the incumbents have more than earned their retirements. If there is ever to be a healthy injection of alternative commentary into these, the city’s most revered critical houses, then this cannot continue. New York’s artists deserve far more diversity at the highest levels than they have thus far received. Such positions are the great bridges of the art world, conveying criticism to the general public. New critics adept and accustomed to the machinations of today’s artistic landscape must be offered the task of driving the constancy, flexibility, and integrity of those choicest highways.

In Scotland—as a reminder of their proximity to the people and to remind them of humility’s merit—monarchs are not referred to as “Your Royal Highness,” but as “Your Grace.” It is time for the crowned heads of New York’s critical court to show some now, and abdicate their thrones.

Brian Sewell: The Art of Pissing People Off, and Not Giving a Damn
9/22/15

Why We All Want to Punch Art
12/18/14
COMMENTS (0)
ArtSlant has shutdown. The website is currently running in a view-only mode to allow archiving of the content.