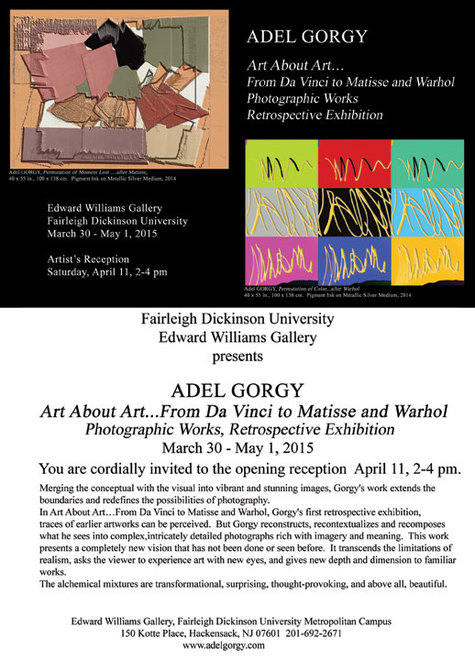 Art About Art – From Da Vinci to Matisse and Warhol 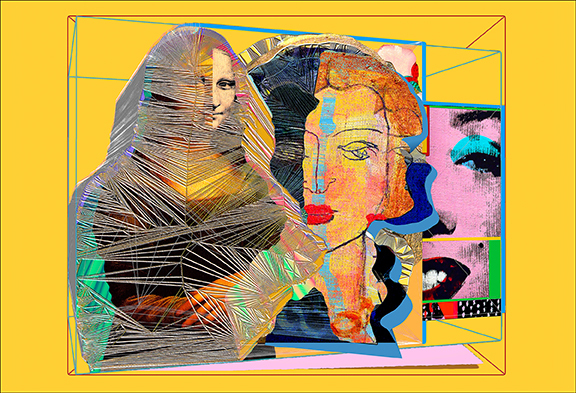 Picasso did it.  Warhol did it.  Rembrandt and Rubens did it.  Da Vinci did too.  Now, there's a chance to see how a 21st century artist revisits, revises and reinterprets masterpieces from the history of art.

Adel Gorgy, whose photographic artwork has been exhibited nationally and internationally in museums and galleries, has, for many years, found inspiration, motivation and creative material in the work of other artists.  His retrospective exhibition, "Art About Art – From Da Vinci to Matisse and Warhol" at Fairleigh Dickinson University's Edward Williams Gallery opened on March 30th.  A wide selection of compelling, complex, wall-sized abstract photographs on a variety of media fill the gallery.  Gorgy's work is bold, colorful, and layered.  Twining lines or blocks of vivid tones dance across the picture plane.  He skillfully and successfully blends the conceptual and the visual into his uniquely composed abstractions. 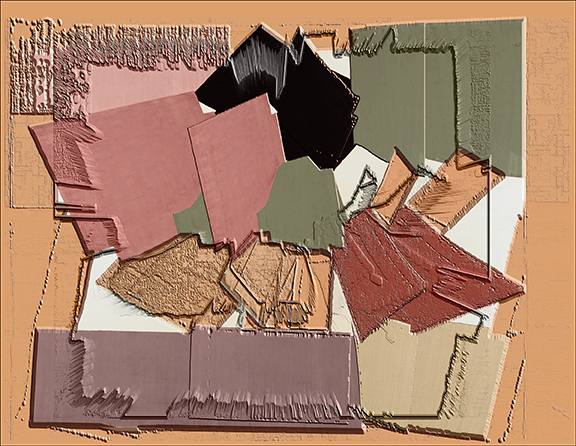 Abstract photography is a rarified niche within its own world.  To create non-representational works with a device whose function is to capture representations is challenging and counter-intuitive.  Gorgy is in the forefront of a new trend by focusing the majority of his work within the realm of abstraction.  Rather than fitting his vision into his medium, Gorgy has found a way to bend the medium and the tools to his unique way of seeing.  In fact, in his artist's statement Gorgy provocatively states, "All is abstraction, and reality is an illusion."  His photographic artworks give credence to his claim.

Like other artists throughout history, Adel Gorgy finds fertile ground for inspiration and innovation in the art that has colored his vision and the world we live in.  For art to be truly meaningful, and transcend its own esthetic qualities—whether beautiful or jarring, uplifting or shocking—art must speak not just to the viewer, but to art itself.  This is what propels the creative development of humanity.  Gorgy's work does exactly that.

Like da Vinci, Matisse and Warhol, to whom he nods in the title of his exhibition, Adel Gorgy looks back on works in the canon of art.  The works he creates, though, are totally new and offer completely different ways of experiencing images with which we may be so familiar that we really don't see them anymore. 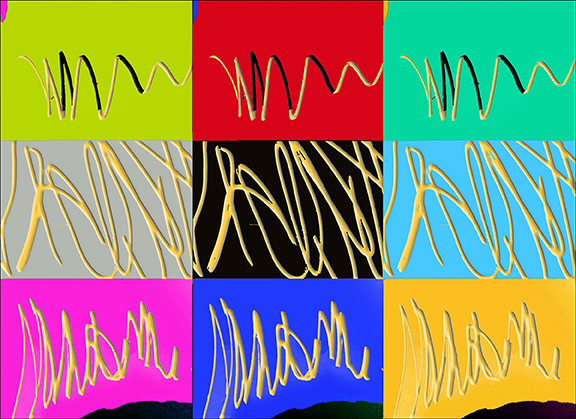 In "Icons in Time…Da Vinci to Matisse and Warhol," a 2015 work, Gorgy spins imagery and technique across a gilded surface.  He offers a novel portrayal of not just da Vinci's "Mona Lisa," Matisse's "Woman in Blue" and Warhol's "Marilyn," but much more.  In Gorgy's work, Mona Lisa, the most recognizable subject of a work of art in the world has been wrapped or shrouded in lines.  She's been lifted from her background, as he lifts her out of time, and re-presented, though partially obscured, in a totally different context.  No longer a particular Renaissance woman, she's become an icon—flattened, given meanings beyond those of her own reality, memorialized and depersonalized.  Gorgy's treatment speaks volumes about the roles of image making, repetition, and fame.  Matisse's model, Lydia Delectorskaya, has been remodeled, and no more than an eye and half the lips of Warhol's Marilyn come through.

All is altered.  All is fractured.  Lines and boxes wrap the figures, compartmentalizing them like packages on store shelves. In Gorgy's work, as in Picasso's ground-breaking "Les Demoiselles d'Avignon," images that never co-existed are brought together to say something new. 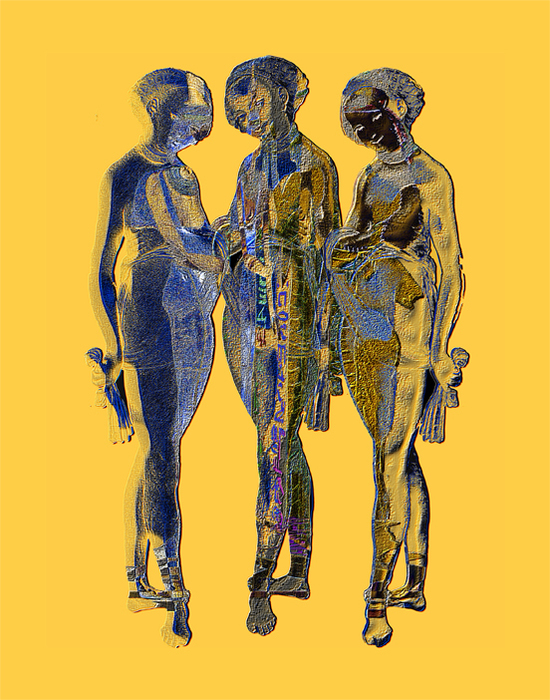 "Art About Art – From Da Vinci to Matisse and Warhol" includes a wide range of work.  There are earlier, black and white works by Gorgy.  In "To Die With Eyes Wide Open" and "The Look Beyond Death" we see portraits found in Egyptian death masks filling the frames with an almost palpable presence.  Delicate figures by the 15th century painter Cranach the Elder have been photographed and recomposed into new visions of the three graces.  Gorgy's huge, encompassing canvases filled with visual phrases found in the work of Pollock and de Kooning are particularly arresting.  While they're large enough to completely fill the viewer's field of vision, they also invite close-up looking to see the complexities and artistic decision making that are critical to Gorgy's work and make it so particular and impressive.

Mary Gregory is a New York art critic, and novelist whose work appears regulary in newspapers and magazines.

Posted by Mary Gregory on 4/11/15
RELATED ARTICLES
COMMENTS (0)
ArtSlant has shutdown. The website is currently running in a view-only mode to allow archiving of the content.