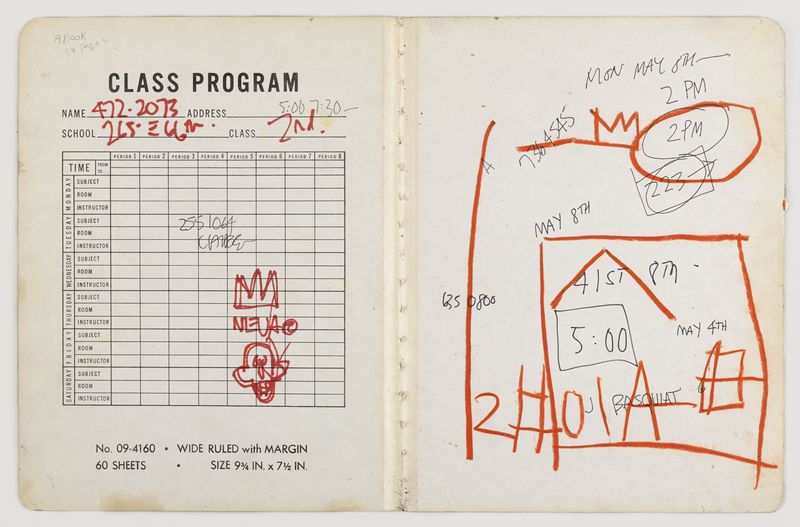 “Words are all we have.”
—Samuel Beckett

“I cross out words so you will see them more.”
—Jean-Michel Basquiat

There are some painters who are born great (Picasso), some who attained greatness due to circumstances of their time (David), and some whose work grows in importance posthumously (Kahlo); Jean-Michel Basquiat is a rare case of a painter who managed to fall into all three of these categories. He was a prodigious teenager who came out of the gate fast with his graffiti work, which was timely and poetic and achieved meteoric success and celebrity in the 80s. Now, 30 years on, he is an artist whose every sketch, it seems, grows in complexity and meaning through retrospective and deeper readings. Basquiat fused drawing, painting, pop culture, and music with history and poetry to produce an artistic language and content that was entirely his own. Combining the tools of graffiti (Sharpies, spray enamel, and chalk) with those of fine art (oil and acrylic paint, collage, and oil stick), his best paintings maintain a powerful tension between opposing aesthetic forces—thought and expression; control and spontaneity; wit, urbanity, and primitivism—while providing acerbic commentary on the harsher realities of race, culture, and society in the early 80s New York social landscape. Basquiat: The Unknown Notebooks at the Brooklyn Museum is an excellent opportunity to evaluate fresh material from the collection of Larry Warsh, which has not been seen in any public exhibitions before. 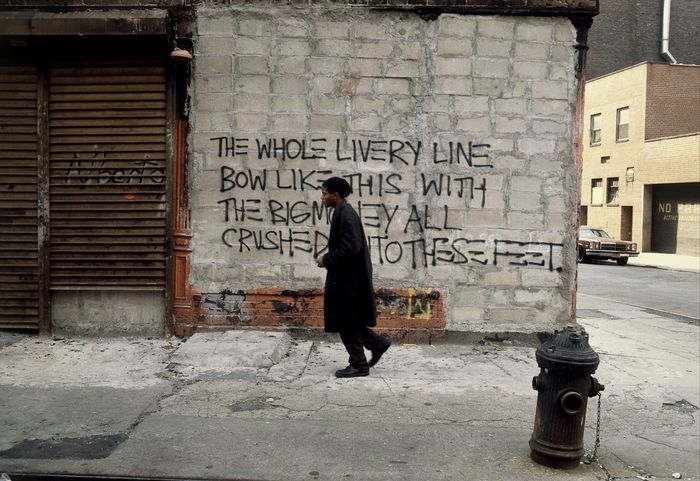 Right at the start of the exhibition we see the ease with which Basquiat transitioned from tagging walls in the late 70s with Al Diaz under the pseudonym SAMO to filling small children’s composition books with block-lettered phrases, pieces of poetry, and found sayings. Conceptually and visually these books resemble the early concrete poetry of the sculptor Carl Andre, who used words as material, laying them down in careful arrangements on the page, composing, both visually and literarily, snippets of conversations, word snapshots, and diary entries, albeit of an oblique kind. The exhibition contains six notebooks, which have been carefully dissembled to present the work in a more individual format. Although they are displayed non-chronolgically, they show Basquiat creating a format and sticking with it throughout his career.

Basquiat's use of language, in contrast to other artists in the 80s like Barbara Kruger, Mira Schor, or Christopher Wool, was largely poetic. He chose words for their descriptive and lyric qualities, sampling found material and combining it with his own word inventions: “leapsickness,” “pedxing,” “aspuria.” Some pages, like this from a 1992 notebook, border on the cinematic:

Other pages from the same folio are lists of phone numbers, shopping lists (“1 STICK BUTTER/BACON/1/2 DOZ EGGS”), or women’s names. In a nine-panel work from 1984 titled Melville, Basquiat copies the chapter index from Moby Dick, emphasizing the poetry of Melville, by turning the chapter titles into haikus:

QUEEQUEG IN HIS COFFIN/DOES THE WHALE’S MAGNITUDE DIMINISH?/THE WHITENESS OF THE WHALE. 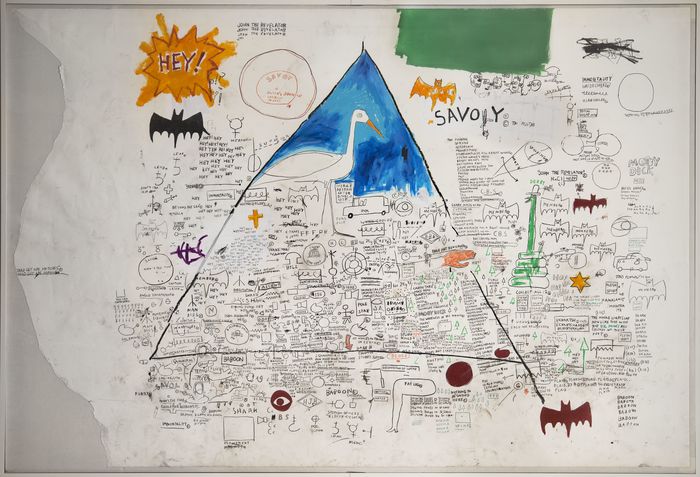 In addition to the notebook pages, the exhibition includes larger examples of some of Basquiat's paintings with collaged elements. In these works he does not simply scale up the words to fit the canvas, as Cy Twombly or Julian Schnabel might, but rather fills the space with a cacophony of words both discordant and, sometimes, eerily brilliant. Untitled (1986), for example, a torn canvas that resembles a bearskin rug, riffs on familiar themes of jazz music, luxury items, and Batman logos. In this vividly colored canvas (as well as in the neighboring oil stick on paper, UNTITLED (LEONARDO DA VINCI) from 1982), words are used like brushstrokes; the frenetic, all-over quality suggests a drive toward a sort of disjunctive mapping, rather than the building of a classically unified composition, where seemingly unrelated marks suddenly coalesce in syncopated rhythms. Comparisons were made of his work to boxing and the cool jazz of Miles Davis.

In retrospect, it might have been a little too easy to place his work in the category of Neo-Expressionism, with its bombast and emphasis on direct, experiential painting. Closer looks reveal that his process (no doubt influenced by his working relationship with Warhol) didn't fit quite so neatly into the same camp as Schnabel and Clemente, but walked a fine line between high and low culture. In his essay "The Culture Industry: Enlightenment as Mass Deception," the art theorist and social critic Theodor Adorno attempted to analyze the transformation of the cultural sphere in industrialized capitalist society. Adorno argued that as a result of the increasing rationalization of life in a technological society, the cultural sphere becomes one of the areas through which the dominant economic norms are inserted. He posited that this commodification of culture leads inevitably to the conflation of the avante-garde, or high culture, and those lower forms of popular entertainment or spectacle. For Adorno, the end result of this mash-up is kitsch. Perhaps no artist in the twentieth century since Warhol understood how to commodify kitsch into a believable art form as much as Basquiat. 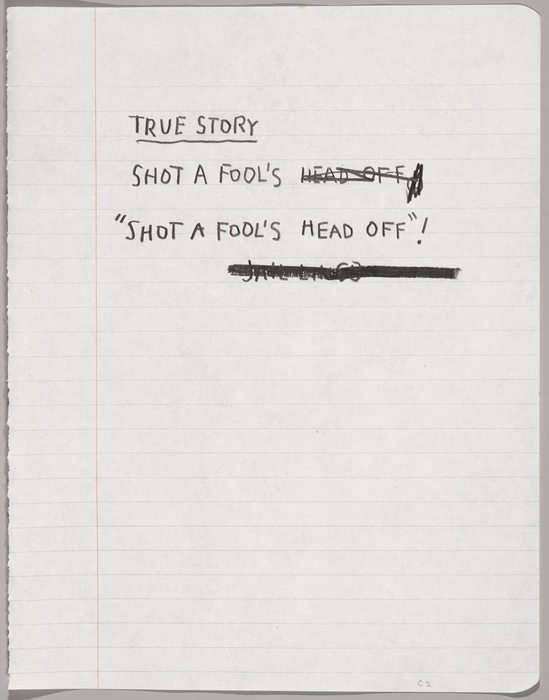 Basquiat indeed has proven to be a greater, more lasting talent than the bombastic propaganda the 80s promised. One of the most beautiful things about this show of works, which in some ways were probably meant to be personal, is that we get glimpses of the private Basquiat. One diaristic page reads like a confession, or an indictment—a poem of almost excruciating poignancy, showing us what this effort cost him: