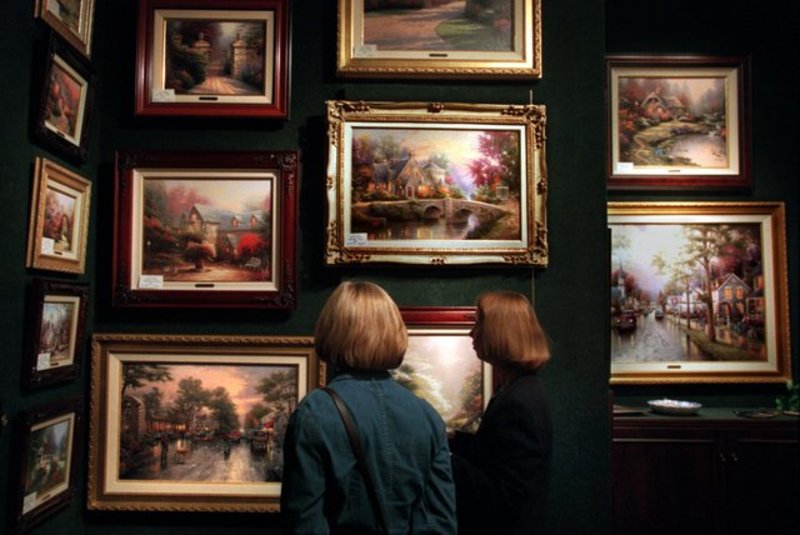 A startling discovery has been made concerning one of contemporary art’s most polarizing artists.

A new narrative has come to light concerning the Painter of Light™, Thomas Kinkade, after the artist’s private notes, previously hidden, have been made public for the first time. Kinkade’s illegitimate status in the contemporary art world had always vexed him, but, apparently, he intended to have the last laugh after all. Judging from his recently uncovered notes, which will be put on public display in a major exhibition next year, he planned to reveal the nature of his lifelong conceptual art project in a grand fashion, plans that were ultimately cut short by his untimely death in 2012.

Suzzanne McAffrey, a Ph.D. student in art history at California State University, Fullerton, made the discovery last month while archiving Kinkade’s personal journals, books, magazines, and other items from the artist’s studio, which were part of a large bequest to the college on the part of the Kinkade Foundation in 2013. The Foundation had retained a close relationship with CSUF ever since the exhibition Thomas Kinkade: Heaven on Earth at the CSUF Grand Central Art Center, curated by artist Jeffrey Vallance in 2004. 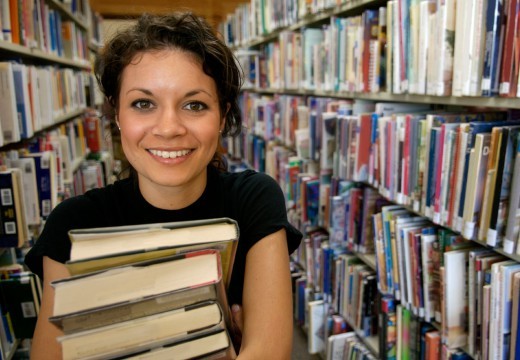 While cataloguing Kinkade’s library of books, McAffrey found several slips of paper inserted between the pages of his collection of Clive Cussler “Dirk Pitt” novels. These notes, apparently hidden by Kinkade—and perhaps squirreled away in case of posthumous discovery—indicate in no uncertain terms Kinkade’s true motive for creating his multi-million dollar art empire: to “sabotage the art world” as “the ultimate conceptual work, undermining all the art establishment holds dear.”

One of Kinkade’s more coherent notes outlines his master plan:

Phase 1: promote myself as the most successful artist in the culture
Phase 2: build a highly successful corporation around myself
Phase 3: create a viable alternative to a contemporary art world
Phase 4: reveal the Trojan Horse! (just in time for my Whitney retro HAHAHA) [sic]

Kinkade had made reference to phases one through three in a 2000 article published in Christianity Today, outlining his plan to “restore dignity to the arts,” but had never publicly made mention of phase four. This was probably due to the belief that he espoused in a long, tightly written tract discovered between the pages of the 1999 novel Atlantis Found, that “you have to make sure they think you’re earnest. [sic] Otherwise it won’t work.”

Notes scribbled by Kinkade profess his indebtedness to Warhol and admiration of Takashi Murakami, while triumphantly asserting that he was “beating them at their own game” and “going for the ultimate long con.” An essay-length note, folded between the hardback cover of Cussler’s 1996 novel Shock Wave, went into great detail about Kinkade’s project in relation to the work of Marcel Duchamp. The most revealing and detailed treatise, found in a copy of Cussler’s first Dirk Pitt adventure, The Mediterranean Caper, summarizes the artist’s plans in developing “the mythology of the artist,” including references to Kinkade’s oft-repeated origin story, the catalyzing “vision of Jesus” he claimed to have experienced as an art student at Art Center College of Design in Pasadena, and his subsequent appeal to the evangelical Christian contingent. 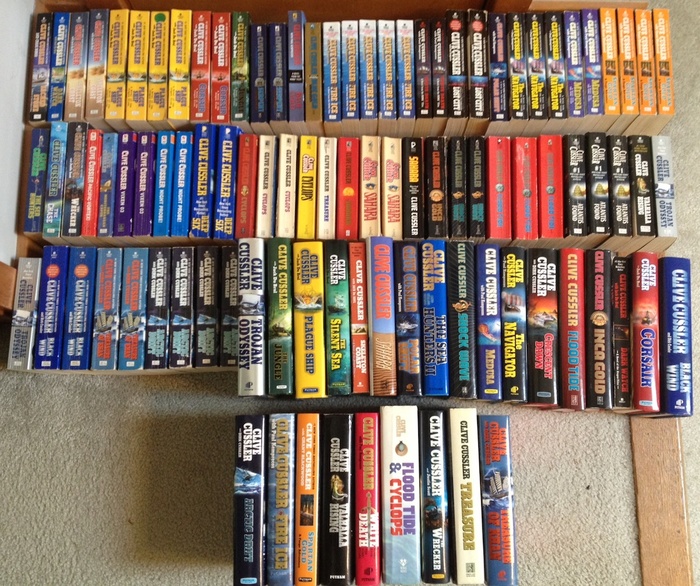 The Clive Cussler collection from the Kinkade archive at CSUF

G. Eric Kuskey, author of the 2014 biography Billion Dollar Painter: The Triumph and Tragedy of Thomas Kinkade, Painter of Light expressed dismay about the timing of this new revelation. Though his biography touches upon Kinkade's art world aspirations—"Warhol is my hero," the artist is quoted as saying—it falls short of relaying the complete picture. "I never even thought to look in the Clive Cussler novels," Kuskey confessed.

Jeffrey Vallance, the contemporary artist and curator who worked with Kinkade on his first and—so far—only museum exhibition, expressed a great deal of shock at the news. “Thom had thought out loud to me about wanting to be a ‘performance artist’ but I never imagined the act was, well, a real ‘act.’ I always said he was a kind of repressed trickster, but this is unbelievable,” Vallance laughed. “But maybe it does help explain the public urination,” he said, referring to an incident in which the artist, intoxicated, relieved himself on a statue of Winnie the Pooh at Disneyland while reportedly muttering to himself, “This one’s for you, Walt.”

Other members of the art establishment have expressed similar attitudes of bemusement at this turn of events. We reached out to art historian Anna Brzyski, who had written the concluding remark of the book Thomas Kinkade: the Artist in the Mall (edited by Alexis L. Boylan, 2011):

If Kinkade winked, if he gave us an indication of ironic detachment, criticality (on however minimal a level), or even campy complicity, which would create a possibility that his practice functioned as representation and not the thing itself, and that he was, in fact, one of us, instead of one of them, he could be celebrated as one of the most significant artists working today.

“Well I guess he’s one of us after all!” she exclaimed at the news, throwing her hands in the air with an exasperated, slightly perturbed sigh. 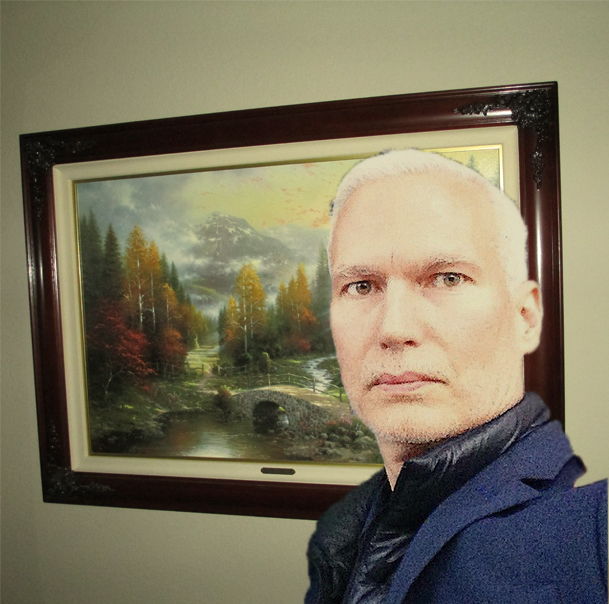 The shock wave continues to permeate the art world, and many art world figures have emerged from the woodwork, relieved to finally be able to publicly appreciate Kinkade’s work without fear of retribution. Mega collector and hedge fund manager Steve Cohen tweeted images of Kinkade paintings The Garden of Prayer and Abundant Harvest with the message: “Vindicated at last! so glad I went for it and bought Kinkade originals. #KinkadeOutoftheCloset.” MoMA curator Klaus Biesenbach preemptively Instagrammed, “We already had a MoMA exhibition underway when this news came out. #Kinkade #redemption”

Many art world stalwarts, however, still refuse to accept Kinkade within their ranks. “No matter the intention, it is still kitsch,” frowned MOCA director Philippe Vergne, “But despite my personal distaste for his work, his achievement in art history is undoubtedly quite significant.”

Under the Radar: Super Pop Boy | Leonard Zinovyev | Taco Eisma
1/10/19
COMMENTS (2)
Note the date of this post
Kudos to ArtSlant for being well-informed on Kinkade and quoting, plausibly, actual people he had dealings with.
Comment by: Caliban93 on Friday 04/24/15 at 8:42 PM
Not too shocking
What explains the peeing on winnie the pooh is alcohol. Three things for certain: 1. If these notes were written in 1999 then the company was already built. Its biggest year was fiscal 2000 aka 1999. So at that point success was already attained making these notes not too important. 2. Thom struggled with inherited demons that eventually cost him his life. Truly sad 3. Eric Kuskey (who is quoted) is an arrogant blow hard that knew nothing about how to grow a business and was only relevant because he was Ken Raasch's gopher.
Comment by: haywood on Friday 04/03/15 at 7:32 AM
ArtSlant has shutdown. The website is currently running in a view-only mode to allow archiving of the content.