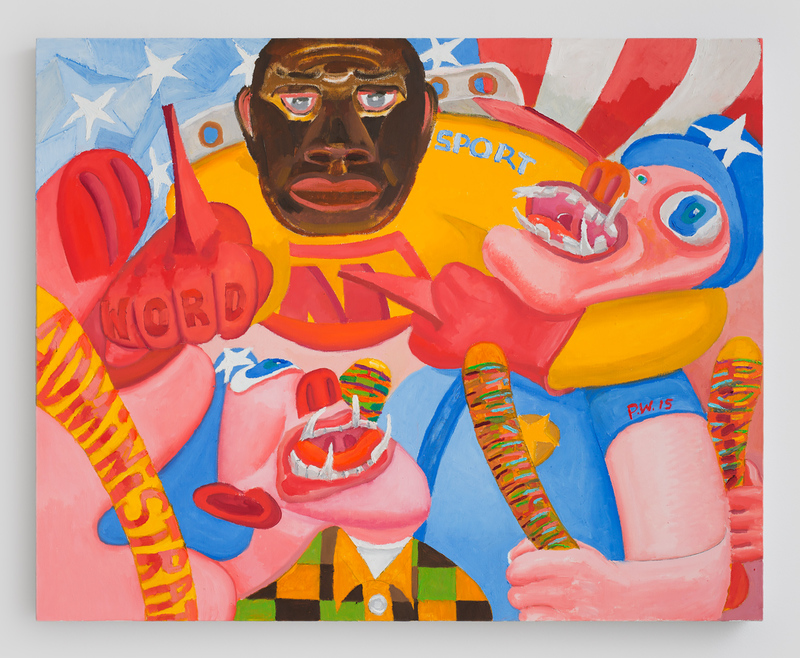 Kicking Against the Pricks

“And when we were all fallen to the earth, I heard a voice speaking unto me, and saying in the Hebrew tongue, 'Saul, Saul, why persecutest thou me? It is hard for thee to kick against the pricks.'”
—Acts 26:14 (King James Version)

"We have art in order not to die from the truth."
—Nietzsche

The paintings of Peter Williams have, for a long time, addressed the nature of the body, specifically addressing how one might inhabit such a fragile space in such an arbitrary world. Naturalistic figures inhabited landscapes populated with cartoon imagery, combinations rendered plausible through Williams’s skilled, and constantly striving, paint handling. With this background in mind, his latest paintings, all untitled, and all from 2015, come as something of a jolt—or, to paraphrase Bruce Nauman, a baseball bat to the back of the head. Here we find Williams stepping out of the atelier and onto the street, so to speak, with works that speak to political and social issues that he seeks to address. 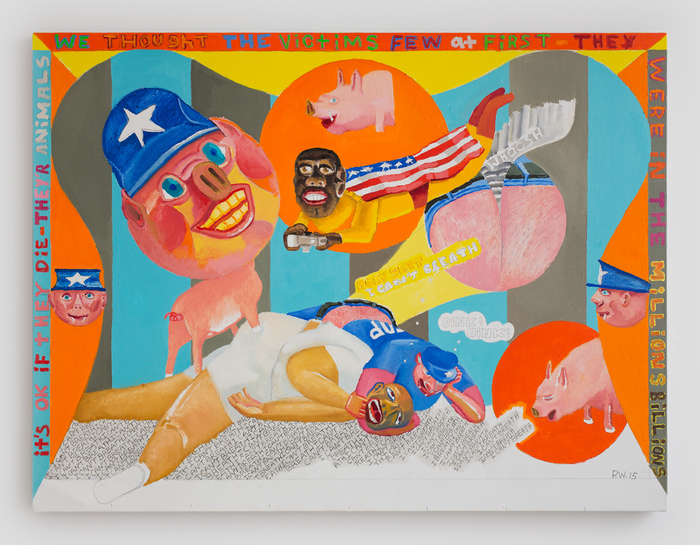 To say that Williams has focused on the figure in the past is not to say that this current work is divergent from that course—there was a time when we spoke of “the body politic,” when our social structure was comprised of bodies, and when we looked at it as a living organism. Similarly, when speaking of painters, we talk of their bodies of work. When encountering these new works of Williams we see painting stripped bare. Gone is the lushness found in his early masterpiece PORTRAIT OF CHRISTOPHER D. FISHER, FOURTH REICH SKINHEAD (1996), itself a “political” work of sorts, depicting Fisher, a 20-year-old Long Beach skinhead in blackface; Fisher was involved in a 1994 plot to blow up churches and synagogues in Orange County in an attempt to ignite a race war.

In Williams’ new works we see the triumphs and tragedies of a cypher figure, a superhero called The N-Word, against a porcine police force, piggy cops with Cyclops eyes—they lack the ability to see things in perspective—who brutalize The N-Word, but he manages to rise time and again from picture to picture. As paintings, these works occupy a space somewhere between history painting and protest placard, at roughly 24 x 36 inches, in primary colors. In one painting Williams references Eric Garner, who lies prone, being choked out by a cop as The N-Word flies in to either rescue or merely bear witness with the camera in his hands. A text running around the sides of the image reads, “it’s ok if they die – they’r [sic] animals.” Williams clarifies this reading of the work: “I slowly have come to realize that some of the police in this country think they have permission to kill minorities. They already incarcerate millions and they are, simply put, exterminating the rest. It’s shocking that this continues even though there is documentation and videos of these acts of violence. So I feel free to expose this ignorance and make art that bears witness to these events.” Williams emphasizes the narrative of the artist (in the form of his alter-ego/protagonist, The N-Word) as participant, not mere victim or spectator in one painting in which the Harlequin vampire figure, the cop (who now has two eyes), and the N-Word embrace. “I cannot be separate,” Williams explains, “we are all culpable.” 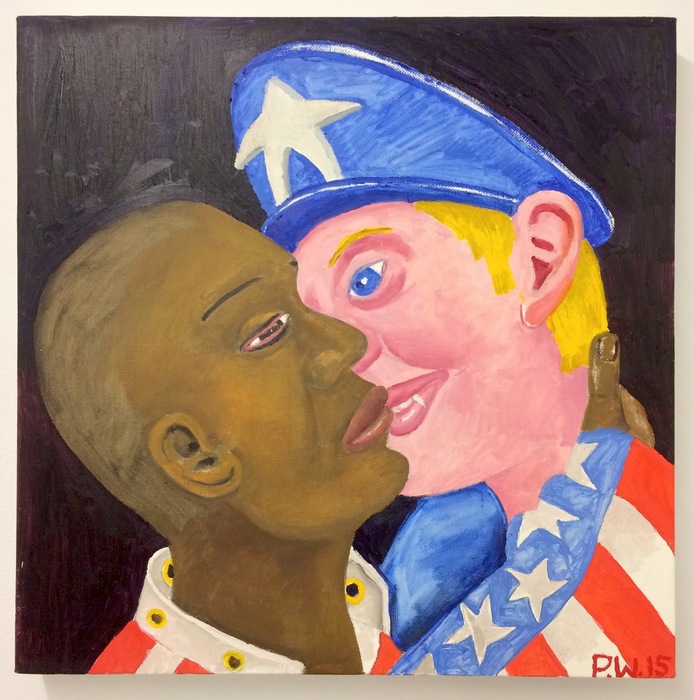 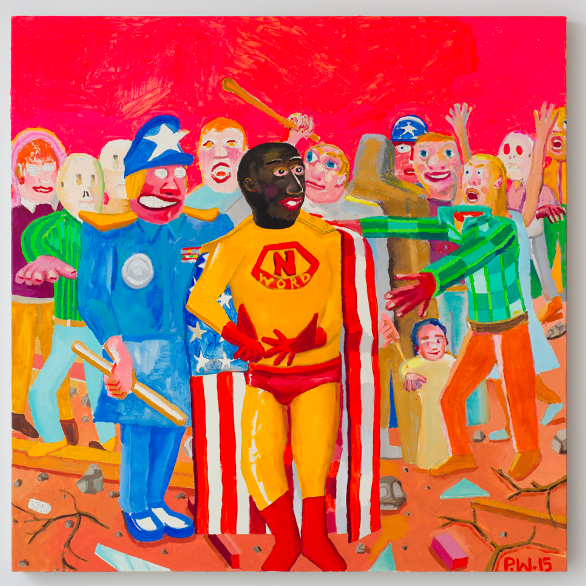 Williams may have seemingly left his usual attention to facture at the studio door with these works, but to see these paintings less as Painting and more as Propaganda would be an egregious case of boat-missing. Indeed, there is a sense of passion and immediacy to them that at first look dominates. It is this immediacy, though, that is their strength, and it doesn’t come at the expense of the painter’s interest in painterly painting. In an era of television’s “live footage” and “breaking news” and endless iPhone shots, it is probably more valuable than ever for a painter to document his moment using the medium of his trade. One might be tempted to compare these works with Jacques-Louis David’s pen and ink sketch Marie-Antoinette on Her Way to the Scaffold (1793), that tiny last document of the Queen and the Terror—“that sinister jotting,” as Jean Louis Soulavie called it. Like David, Williams has tried to turn art to more noble ends through minimalist means; judging from these works, he succeeds.