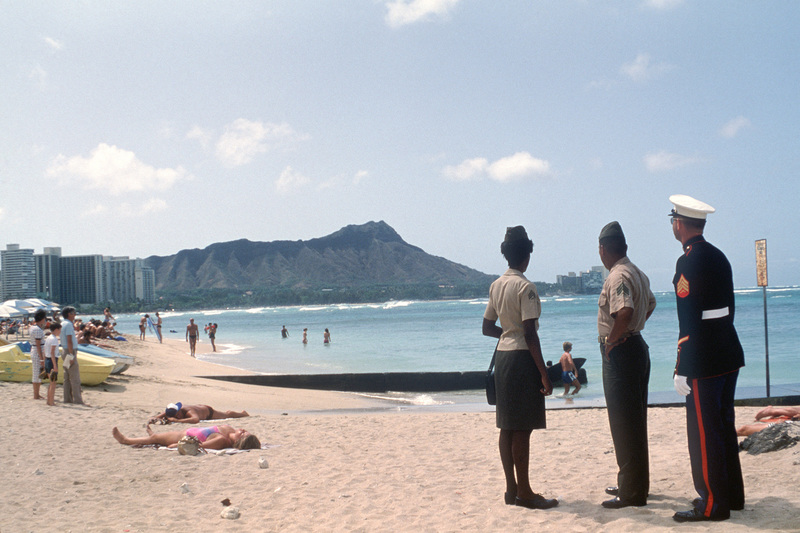 The Sphinx of Waikiki

At its genesis in the final years of the 19th century, the American Empire was more than just a land-based expansion westward. It was a network of islands, an American Archipelago. A hemispheric smear stretching from Puerto Rico through Cuba, out to Hawai'i, Samoa, Guam, and the Philippines, the real challenge for the American center—like all maritime imperial forces—consisted first and foremost in ensuring the reliable transmission of political, social, and commercial power over the many nautical miles of the not-yet-airborne world. These transoceanic colonial holdings found themselves arrayed in a new configuration, one that pointed away from the Old World imperialism of the expiring century and towards a new American horizon, where the flows of global commerce and military attention bound the distributed periphery to the continental center in insidious and spectacular ways. For a particular case of archipelagic rule, one need only zoom in to the Hawaiian island chain, further still to the south shores of O‘ahu, and still closer to an ancient crater with ridges that rise up and crest over the leeward plains. The crater, Diamond Head, is a landform and platform for power that stands as an icon to the intertwined religious, touristic, and military histories of O‘ahu, Hawai‘i, and beyond.

The story of Diamond Head is the story of the quintessential landmark, where land undergoes the alchemy of turning into an image. Even before its silhouette appeared in the first print ads promoting travel to Hawai‘i in 1903, the view of the crater’s ridgeline was linked to theocratic power. The crater hosted an important complex of heiau, or temples, and served as the backdrop to the royal grounds of Waikiki. Successive invading forces landed their warships on the beaches below Diamond Head’s slopes, including Maui war chief Kahekili in the 1780s and later Kamehameha in his successful bid to conquer and unify the islands in the 1790s. The sheer physical presence of the crater, rising as it does so insistently in the middle of the broad flat southern plain, provided an ideal platform for amplifying messages of political and social hierarchy. 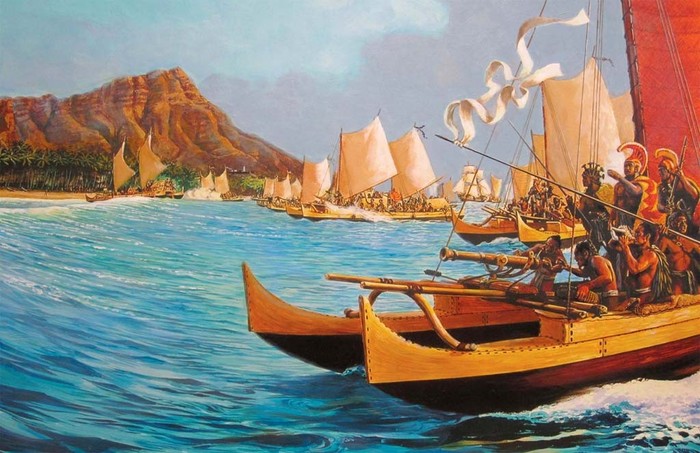 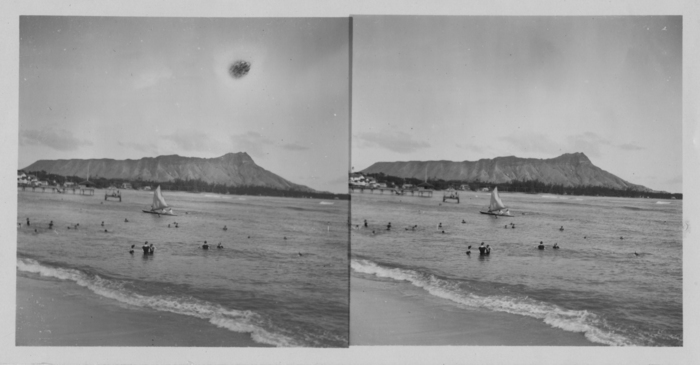 The history of Hawai‘i can be seen through the lens of the crater. As the once sacred stones of the crater’s heiau were pulverized to pave the streets of the newly developing tourist center of Waikiki, the image of Diamond Head was being transmitted far and wide across the globe in advertisements, postcards, and written accounts that portrayed the crater and its host island as an exotic, pristine escape. Few put it better than Haunani-Kay Trask when she describes the psychographic space that Hawai‘i occupied for the daydreamers on the distant American continent: “Hawai‘i is the image of escape from the rawness and violence of daily American life.”[1]

How ironic, then, that Diamond Head—the mascot for the paradisiacal, timeless escape from violence—was at that very moment being fortified and weaponized as a key node in what was known to American military strategists as Fortress O‘ahu. During the period from 1909 through the beginning of World War II, a tally of the U.S. military’s weaponization of the crater shows 34 long-range mortar and artillery installations carved into the slopes and ridges of Diamond Head crater, four high-powered search lights, a command and coordination bunker in the ridge’s crest, and a fort of officers’ quarters, barracks, a machine shop, a shooting range, and a chapel in the crater basin.[2] 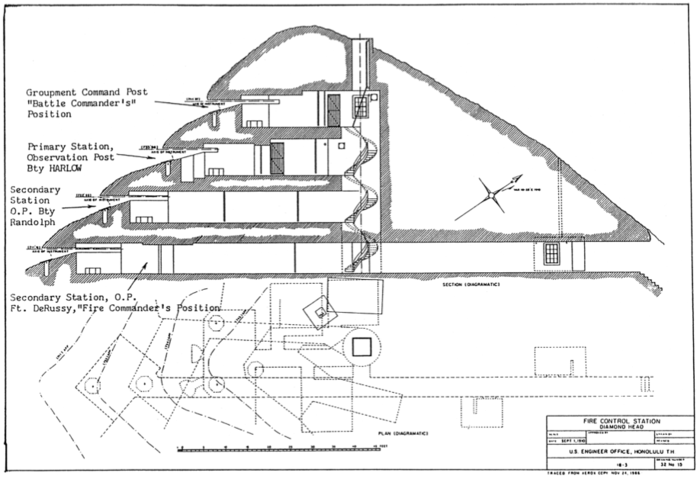 Diamond Head’s soft volcanic rock made the site ideal for digging out these installations, while its picturesqueness served the useful task of circulating in postcards and ads in an aestheticized and mythologized form. These images ensured its cultural presence not as the land, air, and sea weapon that it was, but as a noble and primordial sentinel guarding the new American holding. The realities of the massive weaponization of Fortress O‘ahu, which included sophisticated artillery installations, airfields, underground command centers, beach defenses, mobile troop formations, and large supply centers, have always laid underneath the image of paradise Hawai‘i, have always threatened to puncture, deflate, and destroy the image.[3] 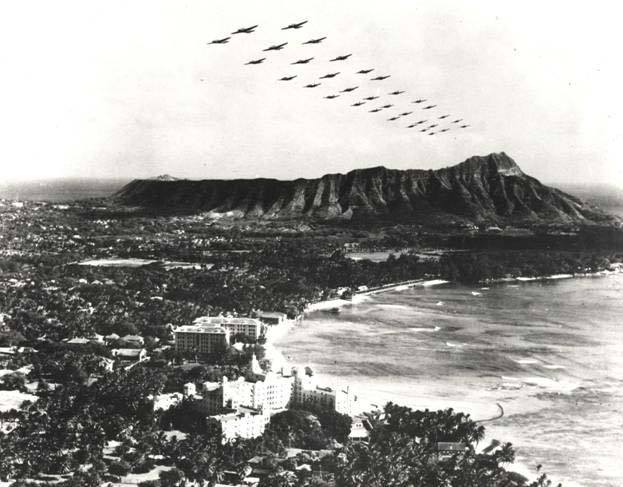 Moments of puncture spring up here and there in the image archives of Diamond Head. There is a persistent need to document the image of the crater in direct juxtaposition with military vehicles of transport and conflict. Here appears a cargo plane, touching down with the Waikiki sentinel looking on from afar. Here, a duo of fighter jets with ridge peak below. And here, one of the first aircraft carriers put into service in the United States Navy, aligned in parallel with the crater fortress. These pictures are akin to army buddy photos—side by side, the large-scale, networked apparatuses of destruction throw their arms around one another, united projectors of power. 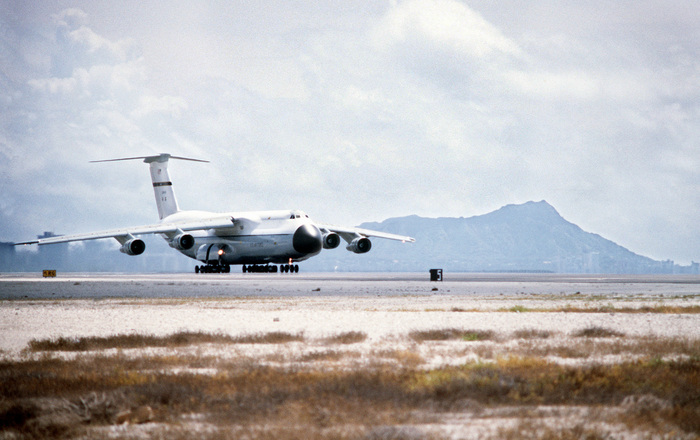 Diamond Head is a form of spectacle that, alongside sites like Pearl Harbor, the Bikini Atoll, and the Panama Canal, embodies the coupling of the colonial and the touristic in the wider oceanic context. The crater is an easy image, jumping into bed with whoever comes knocking. Its ridgeline, like a lenticular, exists in two positions at once, flashing back and forth from upright and erect to sprawled out, sunbathing in repose. Despite its intensive visuality, a presence that has made it perpetually useful to human civilizations on the island, the crater is a platform that remains riddled with absences and concealments. In this way it embodies the notion of the touristic itself, a drive towards seeing, experiencing, being present at a site, but finding it always blank, scooped out, and made distant by the ghosts that long ago marked the land. 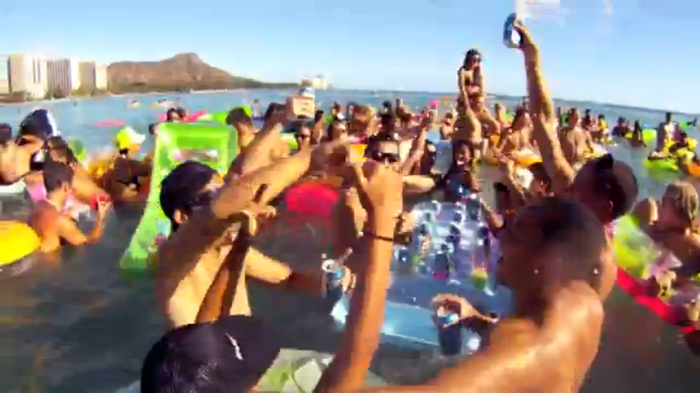