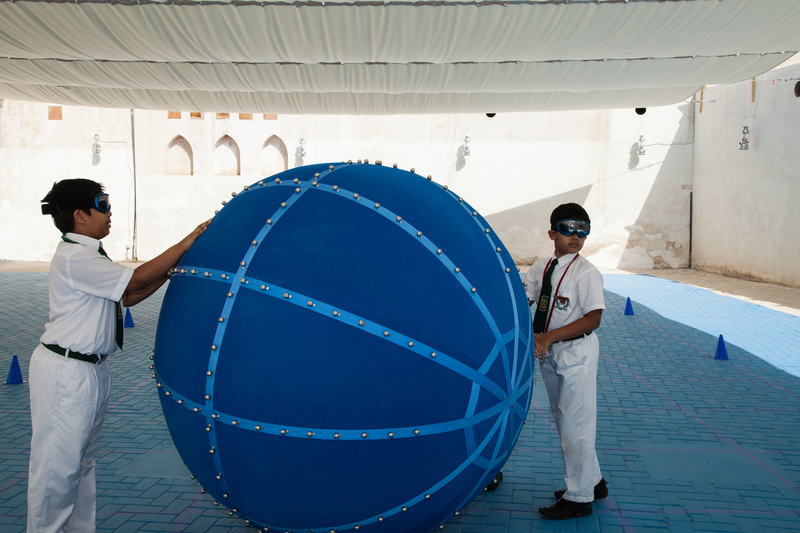 Sharjah Biennial 12: The Right to the City

It is a pity for someone with a good sense of direction to visit Sharjah Biennial 12 (SB12) at Sharjah Art Foundation. You are given a map with free admission, but I advise that you leave it folded in your back pocket, because the best part of the Biennial involves getting lost in the maze of coral-walled alleyways leading to contemporary galleries that shock in their contrast to the heritage area in which they sit. Turn a corner and you might hit a dead-end; or you could find yourself face to armpit with a nine meter section of Danh Vo’s life-size copper replica of the Statue of Liberty, reassembled under the title of ‘Come to where the flavours are’ in a historic courtyard. 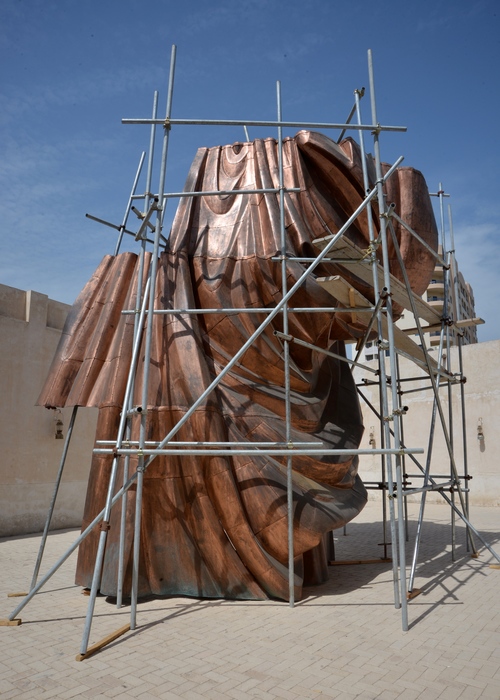 Curator Eungie Joo (formerly of the New Museum) and Sheikha Hoor Al Qasimi, the progressive head of the foundation (and trustee of MoMa Ps1) clearly have a taste for minimalism, and this Biennial is more understated and less interactive than those that came before it, a fact that reflects the maturation of the UAE art scene and its growing ability to grasp art that takes some digging to appreciate. The Biennial’s curatorial concept, The past, the present, the possible was born from a conversation between Joo and Vo dissecting French philosopher Henri Lefebvre’s theory of “The Right to the City,” a call to action for city dwellers to collectively shape their own urban environments. 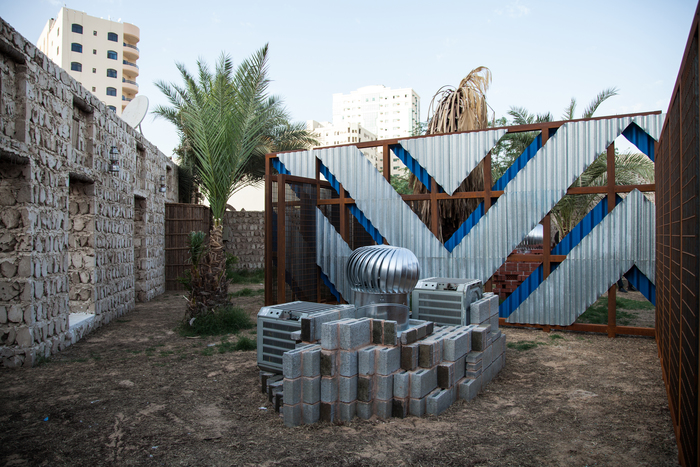 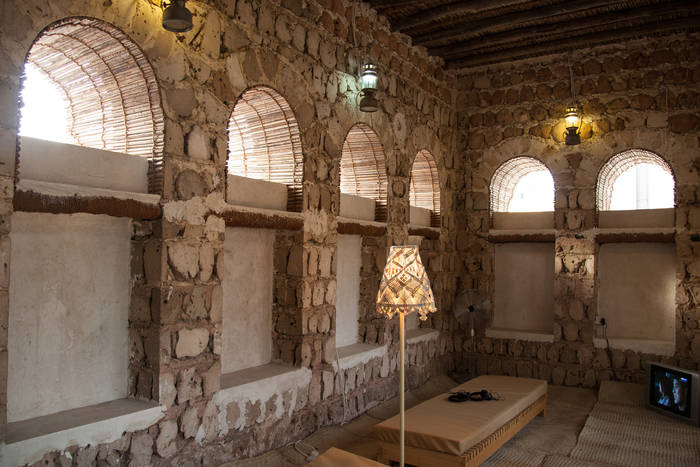 Enter 51 artists and collectives, 36 commissioned by SB12 to create site-specific works following investigative trips or residencies in Sharjah preceding the opening. This was not yet one more example of a wealthy foundation importing the most prestigious contemporary art on the market and cutting and pasting it onto pedestals. This was personal. 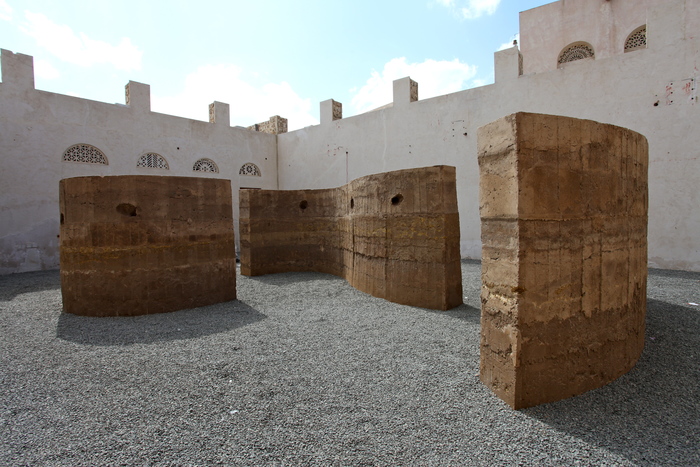 The real strength of SB12 is the conversation that many of these 36 works seem to be having with Sharjah itself: Eduardo Navarro’s XYZ, involving groups of Emirati school children being led in various games with a giant blue ball, claims a courtyard for play bordering on performance art. Rirkrit Tiravanija recreated a rosewater distillery inspired by the 14th century model found in Sharjah’s Museum of Islamic Civilization. Lebanese artist Rayyane Tabet’s Steel Rings, installed beneath classical Arabesque arches, continues for what feels like infinity in remembrance of the Trans-Arabian Pipe Line Company, an ultimately defunct endeavour to link five Arab states through an underground pipeline that aimed—perhaps naively—for technology to cross borders that civilians could not. 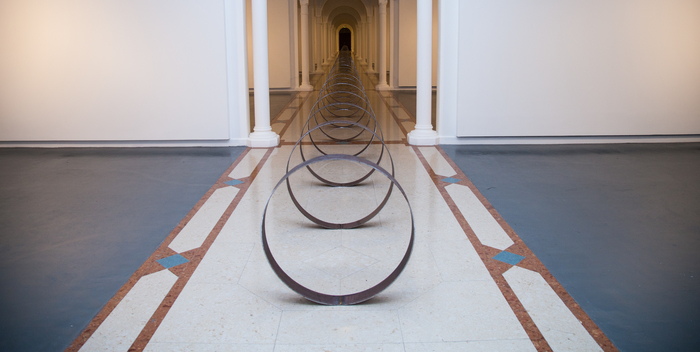 Joo astutely layered these contemporary commissions with work by modern masters—many of whom have roots in the Arab world—including paintings by the poet Etel Adnan, an entire gallery of Princess Fahrelnissa Zeid’s paintings and glass sculptures, and a copper pipe sculpture of conceptual Emirati artist Hassan Sharif who paved the way for coming generations of UAE artists by founding the Emirates Fine Art Society in Sharjah back in the 80s. 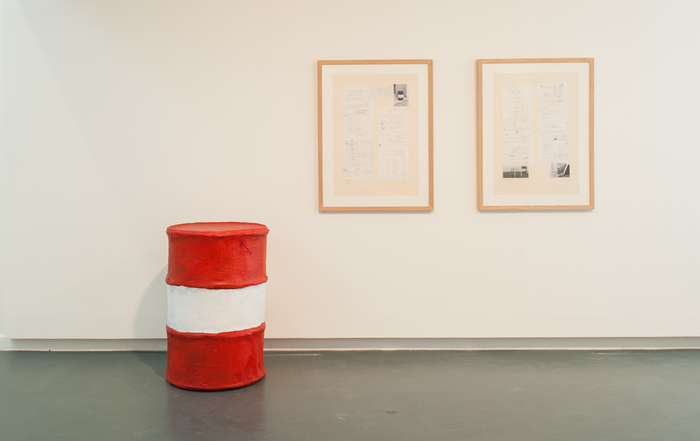 While the curatorial concept is in theory apt for a government-funded foundation set in the heart of the emirate, there were very few city dwellers to be found taking part in the three-day opening. This lack of interaction between visiting art world elites, the UAE arts community, and everyday working residents of the local neighborhood calls into question the audience of this biennial—and of biennials in general. 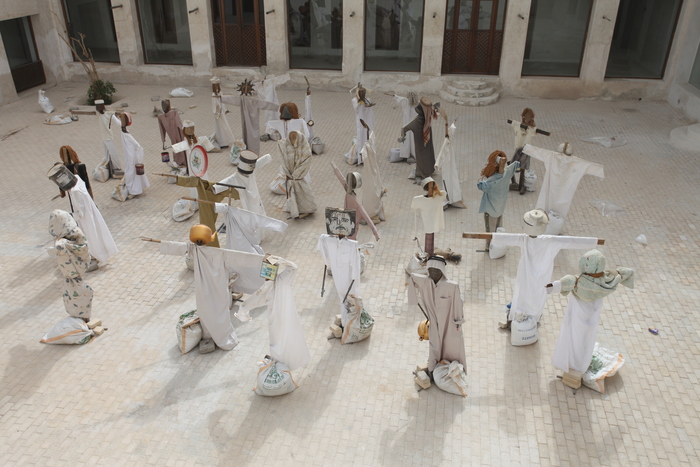 It wasn’t until I walked the gritty streets of Sharjah in an artist’s funeral procession that I began to grasp the relationship between the Biennial and the city. No one died at the Biennial, but Papy Ebotani and a troupe of performers did throw a full-on Congolese-style funeral titled Fanfare funérailles (Funeral brass) which began just outside Sharjah Art Museum, where around 200 artists, writers, and curators stood in head-to-toe baggy linen (I must have missed that memo) and watched as local musicians sang and beat metal drums, while the artist and two dancers moved their bodies in time, opening their shiny suit jackets to draw attention to high street labels. Were we mourning the loss of a friend or the demise of a country’s youth to materialism and corruption? The performers began to walk towards downtown Sharjah with all of us trailing behind. 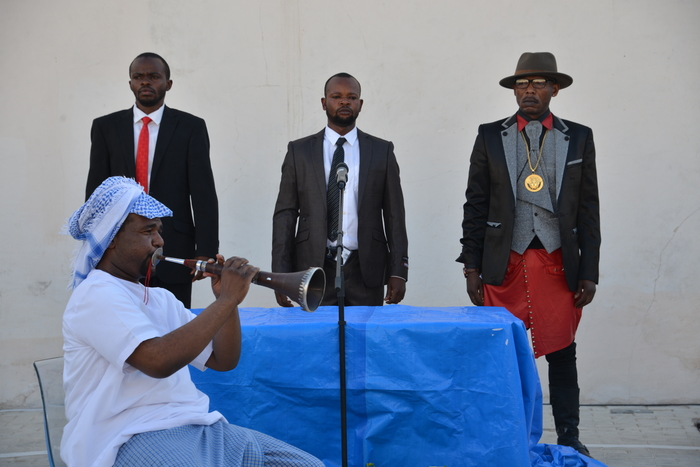 It was Friday—the only day most working people have off in the week. Men in white undershirts crowded onto balconies to take photos with their flip phones, then dressed hurriedly in shalwar kameez and joined the throng. Plucky kids marched along, mimicking the musicians. The dress and auto shop owners lined the sidewalks. The procession ended up at the heart of the Biennial’s exhibition spaces—and for the first time in two days I felt as though the city came to the Biennial and the Biennial came to the city. 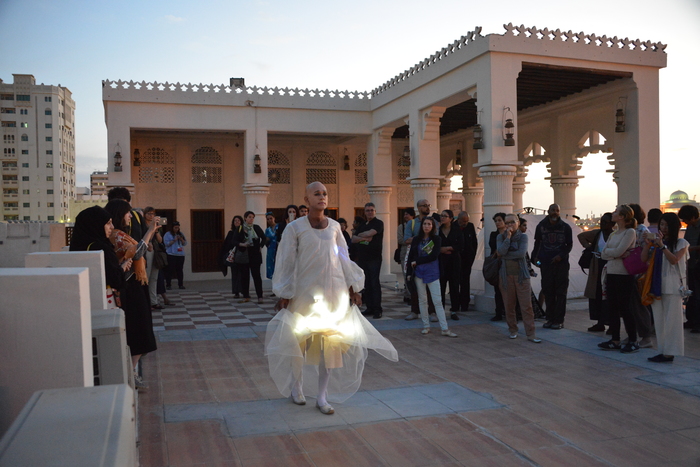 Impressive site-specific installations at The Flying Saucer and the old Kalba Ice Factory, which are spaces newly acquired by SAF in areas of the emirate that have not had easy access to the arts to-date, demonstrate the more inclusive direction in which the Biennial is headed. Let’s hope there is a local audience to match.