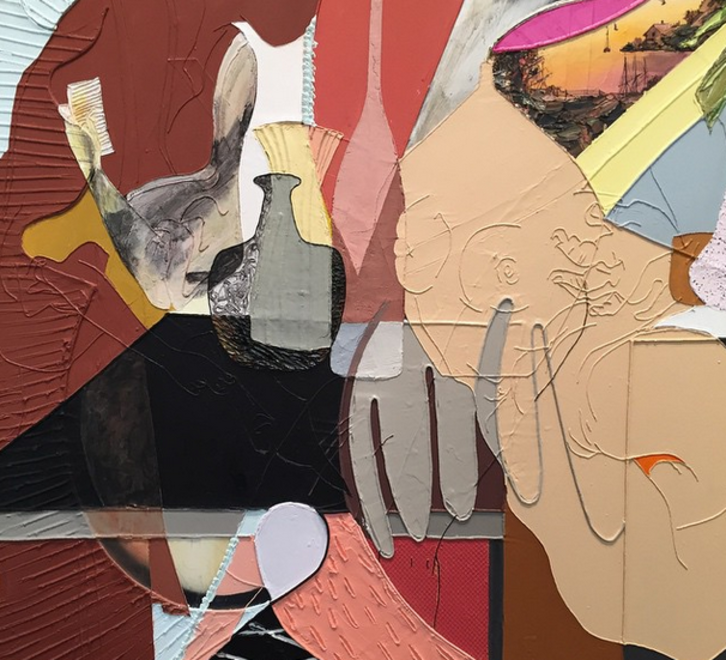 No Need to Be Anxious, Neil Patrick Harris—the Paintings Are All Right

As I was walking around the Armory Show preview on a slushy Wednesday afternoon, I overheard Neil Patrick Harris say, like a self-assuring mantra, “This is not going to make me anxious” as he walked into the fair. I empathized, ridden already with the anxiety of two hours' worth of art-gazing and glad-handing behind me.

Fairs are bound in anxiety for a lot of reasons. They are sheer feats of organization, for one, but it’s the clash of cash and creation that makes them uneasy territory for most. This tension will forever haunt the art fair, an institution that must at once perform as a world-class museum and shopping mall. There is a broader anxiety embodied here; the blatant fact that Art as commodity can assert an apolitical aesthetic yet still act as a purchase of Culture. The act of purchasing is buying into the production and maintenance of Culture.

Fewer works on Pier 94 this year looked conspicuously commercial and, conversely, new paintings from young artists abounded. Painting, that form that refuses to die, stole the show. Minimalist offerings took up less real estate than usual, and galleries were seen happily presenting a bevy of young artists with materialist impulses, intricate works that focused on aptitude and craft as well as heavy doses of patterned, semi-decorative works and some portraiture.

Sculptural offerings were mostly more of the same with only a smattering of Anish Kapoor’s inverted easter eggs. There were a few outstanding three dimensional works including Nari Ward’s diverse and prescient offerings at Lehmann Maupin.

Wafaa Bilal's crowd-funded Canto III took the shape of a bronze figurehead that is at once propogandistic and neo-futurist. The MENAM focus was sculpturally heavy, including a brilliant work by Faycal Baghriche for Taymour Grahne Gallery that consisted of a spinning lit globe, blurred into unity.

Kader Attia's Colonial Modernity: the first mass in Brazil and Algeria, 2014 at Lehmann Maupin was by far one of the most interesting paintings at Armory. Renaissance style paintings, stapled together with large iron clasps, the sensual paintings' union conveyed the violence of cultural stitching that began as artificial and became systemic. Attia's conceptual prowess is on full display in Colonial Modernity.

Betke is not a young painter, no offense Wolfgang. Working for over 20 years, Betke is an accomplished painter and performance artist but his works could easily be seen as a segway into the free-flowing, gestural paintings that many young artists are making these days. Seemingly "difficult" contemporary art, many of these paintings use simplistic measures to engage the attention of the viewer. Facial abstractions, bright and bold framing, active and diverse media complicating the picture frame—these are the hallmarks of the majority of paintings offered this year.

Ryan Sluggett, a young painter from Canada, has been making the rounds with Richard Telles. Borrowing much from cubism, Sluggett successfully updates the palette and adds a cartoonish naïveté and SoCal attitude.

Hailing from Northern California, Evan Nesbit is in the materialist wing of the young painters. Beginning in grad school, Nesbit experimented with burlap as the grounding fabric for his paintings. This experimentation led him to works that feature bright acrylic paint seeping through the loosely woven material in burps and belches.

Henning Strassburger is an emerging German, multidisciplinary artist who has taken to painting lately. His paintings create space in the raw white of the canvas then subvert the implied physics of that space. They often take on the look of a table in the act of up-ending.

On the decorative spectrum, Farah Atassi uses patterns to create the figure. Kehinde Wiley and Timothy Wehrle also contributed textural works that use pattern to outline or backdrop central figures.

Armin Boehm's Thebaine (2015) brings the darkness as a still-life after dark. It's is a nice departure from his stark architectural paintings.

Painting is the most commonly purchased art form. It's distinct, it's portable, it's got a language all its own. All these qualities shore up the foundations of Painting as commodity. Encouragingly, young painterly aesthetics are making their way into the large fairs through established galleries willing to take a chance on new works instead of bringing big names just to draw crowds. Now, if only these young painterly aesthetics could just find a subject other than painting.

Amber Renaye Answers 5 Questions
1/14/19
COMMENTS (1)
Now, if only these young painterly aesthetics could just find a subject other than painting??
You mean anything that is indistinct, non-portable, without language all its own....
Comment by: Terry Harms on Friday 03/06/15 at 1:07 PM
ArtSlant has shutdown. The website is currently running in a view-only mode to allow archiving of the content.