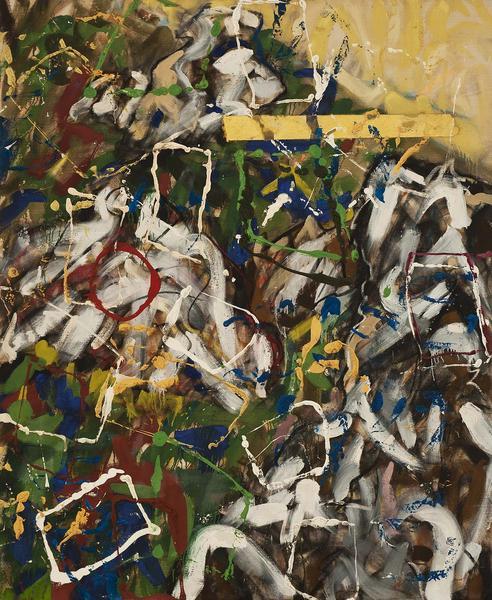 Michael Goldberg was in his fifties when the graffiti movement blanketed New York City in the 1980s. A 'second-generation' abstract expressionist, lifetime professor and Lower East Side resident at the time, he found himself smack in the midst of intense cultural upheaval, drawing itself out by the young and disenfranchised, directly onto the pavement and subway cars.

He absorbed it right into his palette.

This work is currently on-view at Michael Rosenfeld Gallery in an exhibition of paintings and works on paper spanning the last two decades of the artist’s career: Michael Goldberg: Making His Mark, Paintings & Drawings, 1985-2005.

Among the many highlights of a career that started in the early 1950s, Goldberg  studied with Hans Hofmann and exhibited with Pollock, de Kooning, Kline, and others from the New York School  - all mentors and contemporaries, with whom he shared artistic ideas.
In the late 1950s, his work rose to prominence when Martha Jackson Gallery began representing him. In 1960, he collaborated with close friend and poet Frank O’Hara, creating paintings that were immortalized in O'Hara's writing and co-publishing Odes - a book of poetry and prints. In 1962, he moved to 222 Bowery - to the studio and living space Mark Rothko had freshly vacated. It was Rothko's splendid splatters of red left behind (from his famous Seagram paintings) that inspired Goldberg's own monumental Red Paintings, moving him away from his earlier action paintings influenced by de Kooning.

Goldberg's work was, from the start, moving in and out of one avant-garde form to another, in response to his peers, predecessors and the art world around him. He conceived of painting as a "dialogue—with artists who had come before him as well as with contemporary artists and viewers." By the 80s - most of his New York School contemporaries now gone - he needed only look to the graffiti-riddled walls of his Lower East Side building for inspiration. He observed, engaged, embraced, and his art was forever changed. 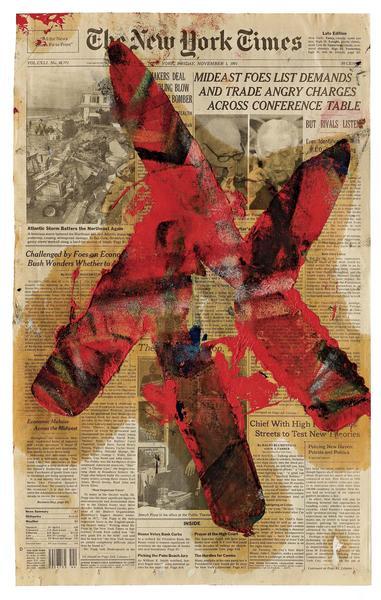 These works from Goldberg's culminating collection are at times dark, cacophonous and ominous - reminiscent of the grime, rebellion and disorganized language of the street. Others are caked with exuberant color; some obscuring text or overlaid with gilded or textural stripes, shapes and calligraphic brush-strokes. Two framed pieces bear amorphous figures over yellowed newspapers dated 1991: The headlines read of foreign conflict, corporate scandal, and energy crises; they have become time capsules and demonstrations that little changes in the plight and politics of man.

Michael Goldberg: Making His Mark tells the enduring story of an artist who was not only a life-long and admired educator, but who was a student from the "Eighth Street Club" to the frescoes of Italy, to the streets of Lower Manhattan. His entire body of work reads as a tribute to a half-century's worth of influential artists and movements in modern art. This final phase squarely confronts and envelops the urban aesthetic of a then-new and and explosive generation teeming all around him. Despite two recent retrospectives of Goldberg's work at major museums, these paintings  - from the last twenty years of his life -  have yet to be fully examined by historians and critics.

Micheal Rosenfeld's spacious and sun-drenched gallery gives each of Goldberg's paintings its own domain, allowing viewers to make a direct connection with each picture - or "dialogue," as the artist would have wanted. The exhibition is a collaboration with  Manny Silverman Gallery on the West Coast and extends, almost simultaneously, to both locations. It is the first Michael Goldberg exhibition at Rosenfled Gallery and the gallery's first bi-coastal collaboration. Both galleries represent the estate of the artist and have come together to "introduce new audiences to the vibrancy and relevance of Goldberg’s long career." The exhibition has been organized with the cooperation of the Goldberg estate. 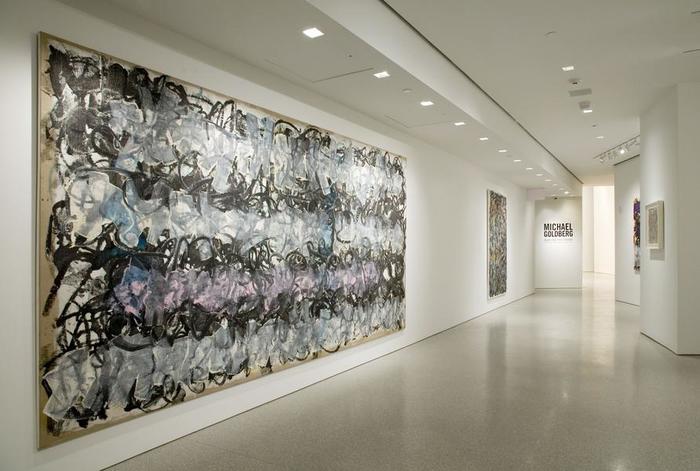