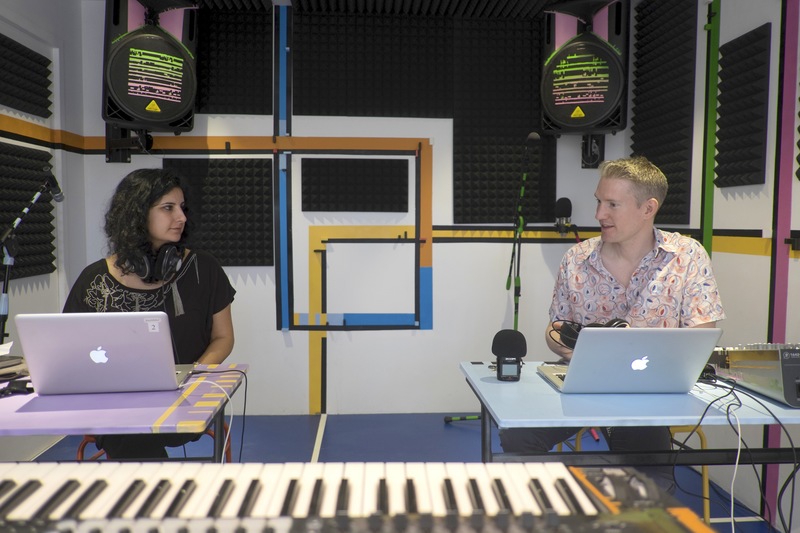 When London-based sound artists Fari Bradley and Chris Weaver first arrived in Dubai for an 11-month residency at Tashkeel, all they could hear was the white noise of air conditioning units. Slowly, their ears adjusted and natural sounds began to break through. While we spoke on the terrace outside the gallery, Fari draped herself on a settee, a droll setup that made me feel like a Freudian psychologist, particularly when our interview took a turn to the theoretical. Our bodies absorbed the muffled vibrations of Drum Circle, their sculpture intoning from within a grouping of old oil barrels set inside.

Bradley, who was born in Iran, has performed work at the V&A and is the radio broadcaster of Six Pillars To Persia, while Weaver straddles the grey area between electronic music and sound art, and was named 2013 Artist of the Year by the British Academy of Songwriters.

The duo opened Systems for a Score on January 7 to an eclectic audience.  The highlight of the show is The Model Studio, a fully functional sound studio incorporating retro Atari equipment, coding, and aesthetics. Over the course of the month, various UAE-based artists will collaborate here, culminating in a limited edition record with The Vinyl Factory that will celebrate the rising popularity of sound art as a medium in the region. Many of the works are in dialogue with traditional Emirati weavings known as Sadu, patterns that Bradley and Weaver have adeptly put to sound.

The exhibition, equally immersed in the UAE’s constructed environment, echoes Variations for Rooms and a Tone, the duo’s November, 2014 performance involving a feral choir comprised of professional architects, who were conducted to sing in a way that brought to life the natural resonant frequencies that exist within every building, a concept with special meaning in a city of iconic skyscrapers.

Danna Lorch: I think of sound art as a form of meditation, because you can’t really be absorbed in your own thoughts if you are creatively listening.

Fari Bradley: For me, sound is Zen. There are two types of noise pollution—one is external and one is internal. Present Telephathique is all about this. The piece is influenced by Robert Filliou’s 1978 Musique Téléphathique installation of playing cards attached to music stands instead of heads transmitting data. We are questioning whether you hear the same sounds being conjured as I do, just as visually we can ask if my orange is your orange. You can only decipher sounds in quiet.

DL: It was challenging to listen at last night’s opening. Why did you opt not to have headsets connected to each work?

FB: It wasn’t the place for listening. The opening was a social event. As a relatively new medium, there is always the question of how to curate sound art, because when you put more than one work in the same room, the sounds overlap.  Viewers can’t turn away from a sound the way they would a painting. Curators went for headphones to save space, which is a massive compromise.

Chris Weaver: We sequenced the works and gave them room to breathe. It’s almost as though we are opening a jar that releases one fragrance, then closing the top, and lifting the jar to reveal a second scent. 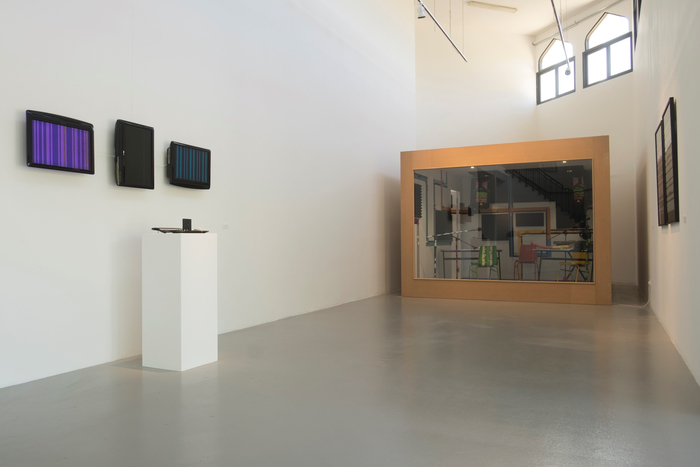 Installation view of Systems for a Score at Tashkeel, 2015; Photo: Jerry Balloch

DL: Is it possible to visualize sound in the first place?

CW: There has been a huge debate in electronic music over whether sounds can be removed from the objects they are associated with and manipulated separately. The Acousmatic movement takes the ideas of the Greek philosopher Pythagoras, who insisted on lecturing his students from behind a curtain, because he didn’t want them distracted by appearances or visual cues. It’s difficult to divorce the two in the gallery system, where there is pressure to produce work that has a visual entry point.

DL: Is there a legacy of sound art in the Arab world, or have performances and exhibitions in the region mainly been by visiting international artists?

FB: Halim El-Dabh an Egyptian radio producer, who now teaches at Princeton, composed a piece of musique concreteon a wire recorder in 1944, as well as a number of artists in Iran in the 60s and 70s doing avant-garde sounds. In terms of our contemporaries, most of the artists get flown in. However, there is real interest in sound art and our previous programs here drew out a number of local artists. 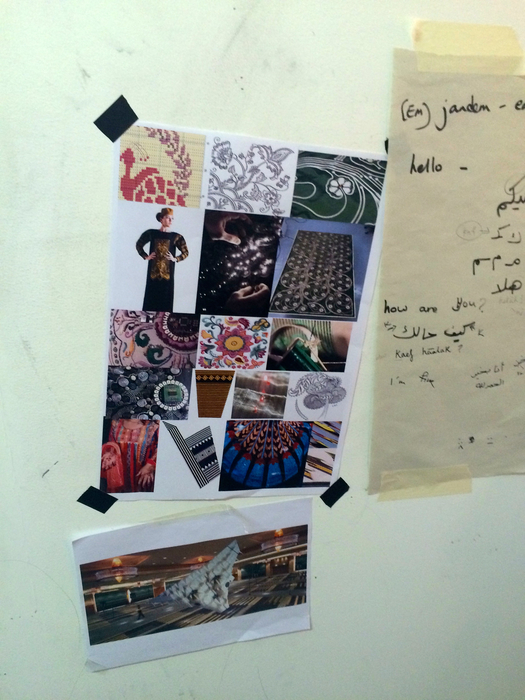 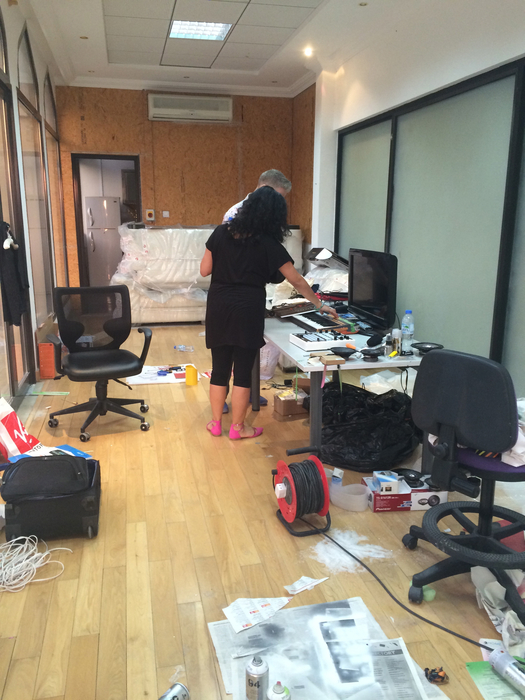 DL: For the next month, the model studio is serving as your base. Where were you working for the first portion of your residency?

FB: Initially we were at desks upstairs with the other artists, but we had to use headphones there, so they eventually moved us to the old kitchen, which I called The Cave. It’s covered in wires and spray cans.

CW: The desks are covered with our junk and it looks like a teenager’s bedroom in The Cave right now. 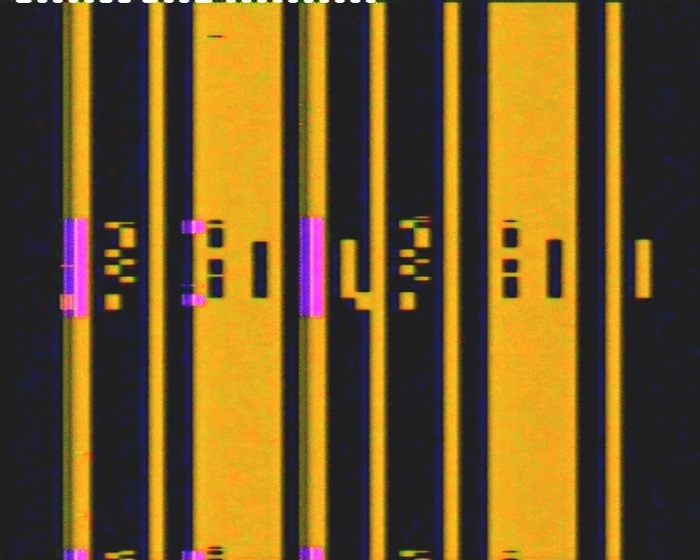 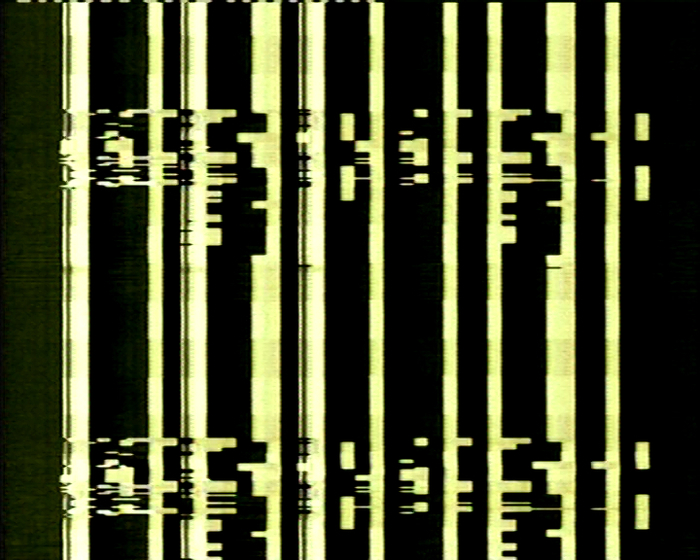 DL:  Systems for a Score has been influenced by traditional Emirati Sadu weavings and retro Atari equipment. How do those two codes relate?

FB: We were drawn to local Sadu weavings and immediately related them to MIDI. If you were looking at Sadu and wondering how it would translate to music you would notice that there are a lot of strips with rectangles coming out of them, but if you work with MIDI music, you’ll know that those blocks can denote percussion, bass notes, or other sounds.

CW: There is a correlation between the disappearance of 80s equipment and of traditional weaving, as well as their system constraints. To make the Atari do even the simplest things was incredibly difficult. The weavers have to express everything in a small grid pattern. 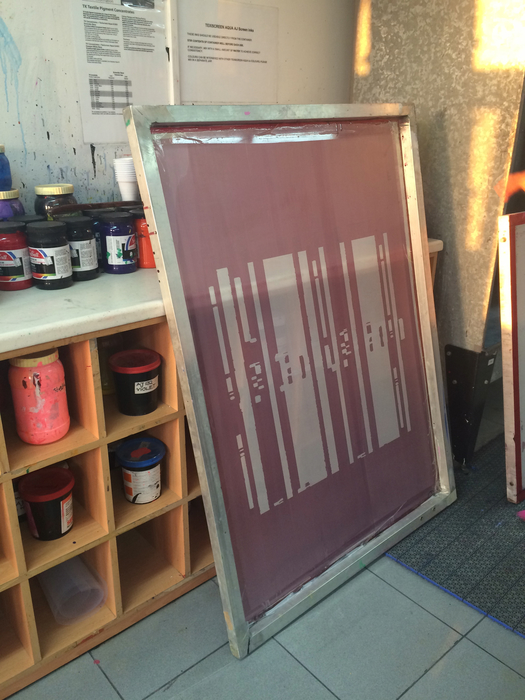 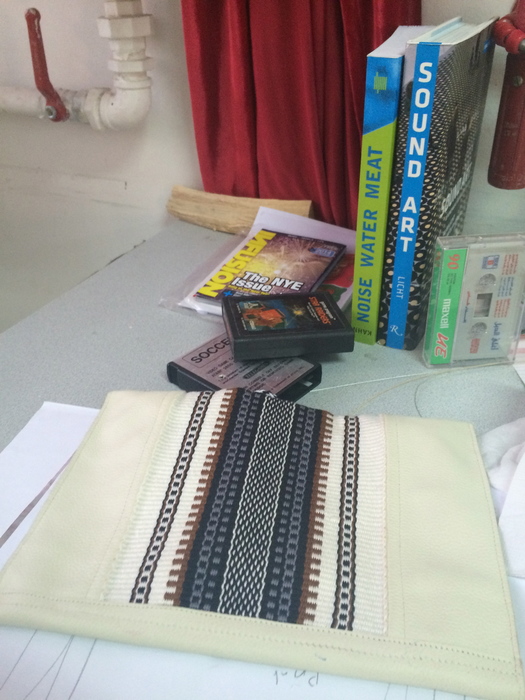 Left: The studio space upstairs at Tashkeel where the artists made their first Sadu and MIDI influenced screen prints

Right: Desk shared by the artists at Tashkeel, including a sample of traditional Emirati Sadu and discarded Atari games; Photos: Danna Lorch 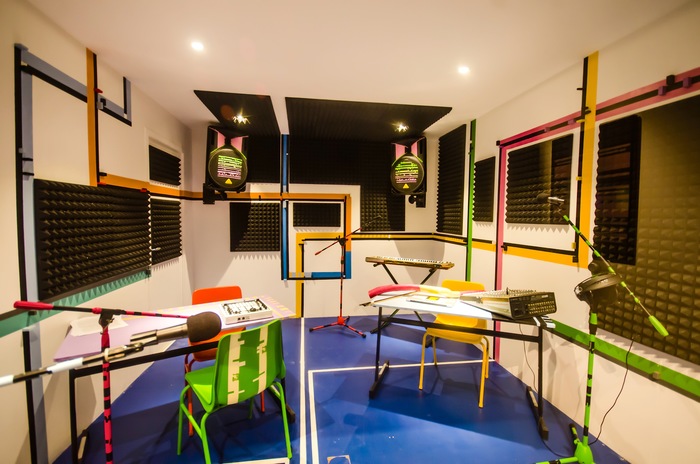 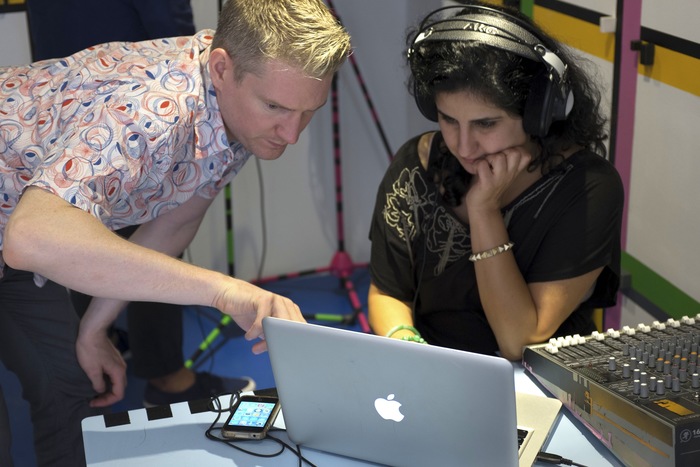 Weaver and Bradley in collaboration in The Model Studio, 2015; Photo: Jerry Balloch 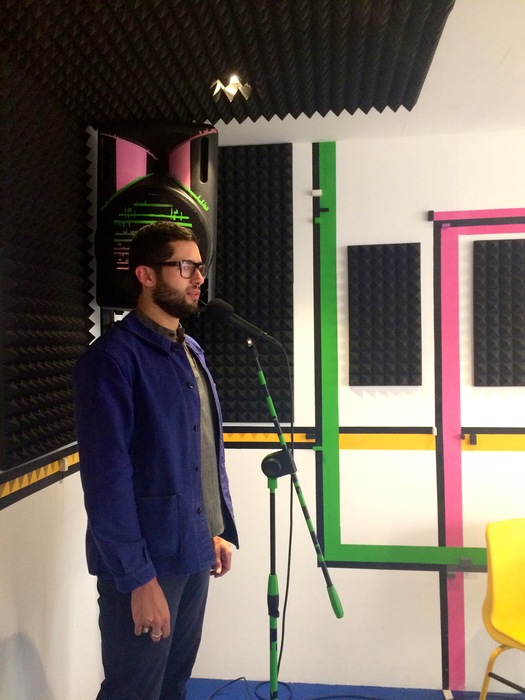 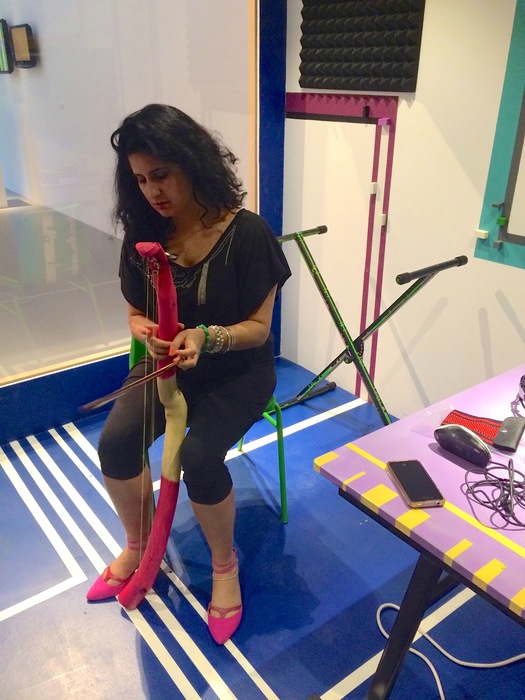 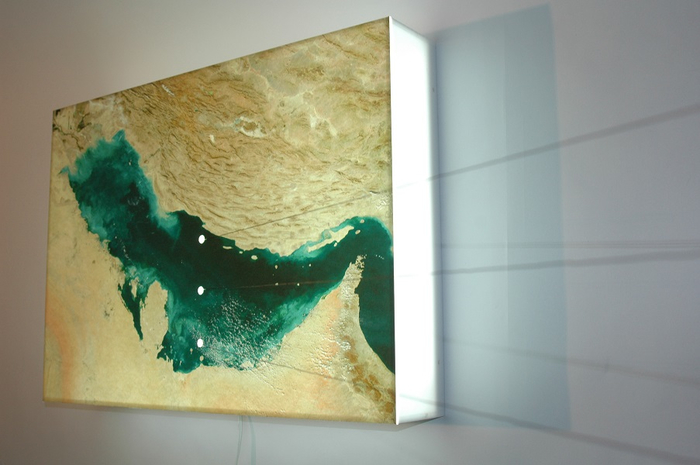 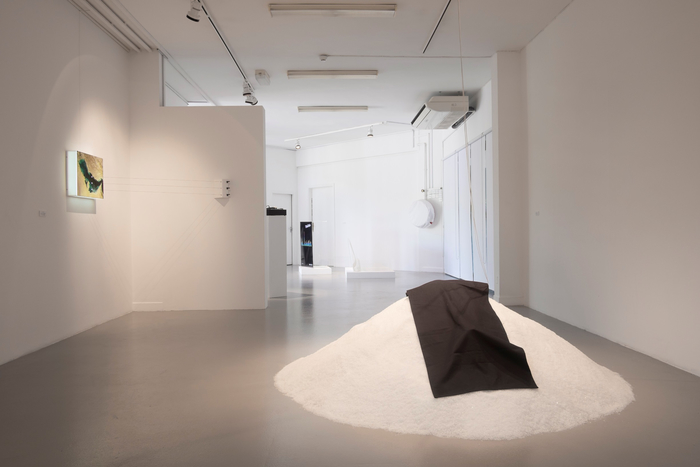 Installation view of Systems for a Score at Tashkeel, 2015; Photo: Jerry Balloch