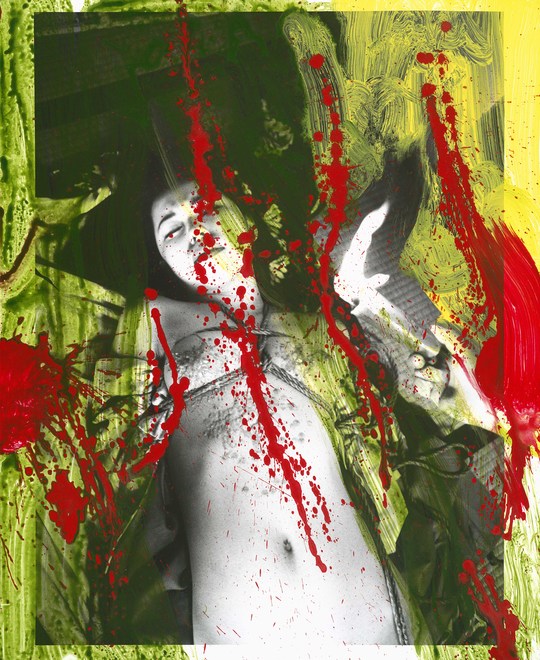 Araki: An Exhibitionist Looking Death in the Eye

In the film After Life (1998) by Kore-eda Hirokazu the recently deceased end up on a minimalist film set. In this purgatory they discuss and improvise with their fellow travelers until they have decided on the ultimately defining moment of their lives. They re-enact it and then pass over to whatever paradise or nothingness may be waiting for them. One by one the dead come to terms with what they’ve left behind. Except for one, who can’t decide.

That guy could have been Nobuyoshi Araki. The now 74-year-old photographer is looking death in the face and doesn’t have a lot to live for anymore—he cremated his wife long ago, his beloved cat died four years ago, he was diagnosed with cancer in 2009, and recently lost the sight of his right eye. But it would be impossible to capture his life or his work—which in a sense are the same—in one image. For over half a century Araki has been taking thousands of photographs a week. He is generally seen as one of the most prolific artists in the world: his photobooks alone number over five hundred. Any retrospective other than an extremely extensive show would be unsatisfactory as a summary. 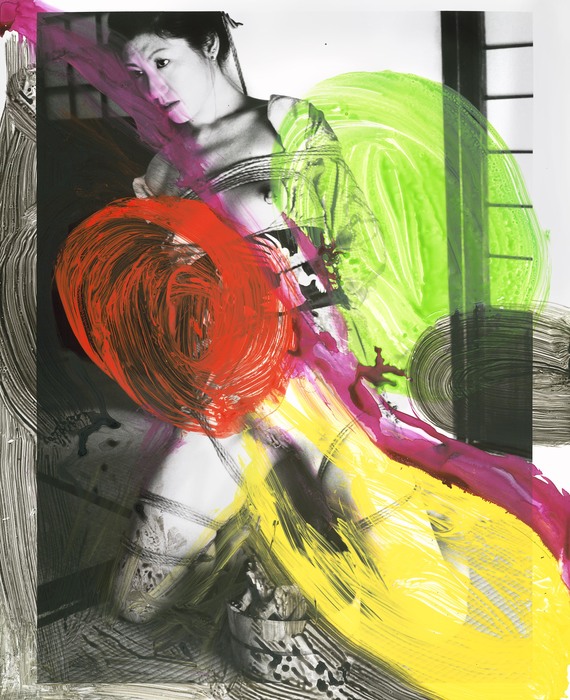 Fortunately, Ojo Shashu – Photography for the Afterlife: Alluring Hell takes a very different approach, although it does look and feel like a farewell. The show, which has been put together in close cooperation with Araki himself and has been shown in three venues in Japan before touching down now for the first time in Europe, takes a hopscotch approach through themes and time. There’s only a handful kinbaku-pictures—the tied-up naked beauties Araki is most famous for—and a lot lesser known work. That makes this a much more interesting undertaking than the last Araki museum show in the Netherlands, in 2004/5 in De Hallen. Photography for the Afterlife actually surprises—which is quite a feat for an exhibition of an artist as well-known as Araki.

The Japanese words in the exhibition title refer to the Ojo Yoshu, a Buddhist text from 985 AD dealing with salvation. It’s a book Araki has been interested in for a while and its emphasis on polarities and balance provide some kind of guideline for the exhibition’s composition. Photographs from Araki’s early days are combined with very recent work; images of extreme intimacy go together with snapshots in public spaces like the metro. Of course, men and women collide; nature and culture play tag. But the most important dichotomy in the exhibition, the one coloring the rest, is life and death. 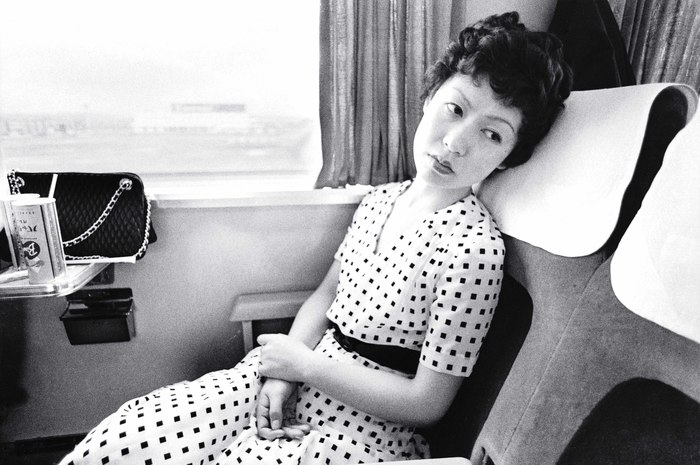 The death of his wife in 1990 blew a hole in Araki’s existence. He had met Yoko at the Dentsu advertising agency where they both worked and they got married in 1971. Already an obsessive photographer and an exhibitionist to boot, Araki documented their honeymoon in detail: Yoko on the train staring ahead, Yoko naked in bed, Yoko at a karaoke bar, Yoko naked again. In FOAM this Sentimental Journey series is countered by Winter Journey, about Yoko’s illness and eventual death. Further along in the exhibition is a similar series, depicting the death of Chiro in 2010. Araki considered the black and white cat a kind of spiritual embodiment of his beloved wife, so when it died he lost her all over again. 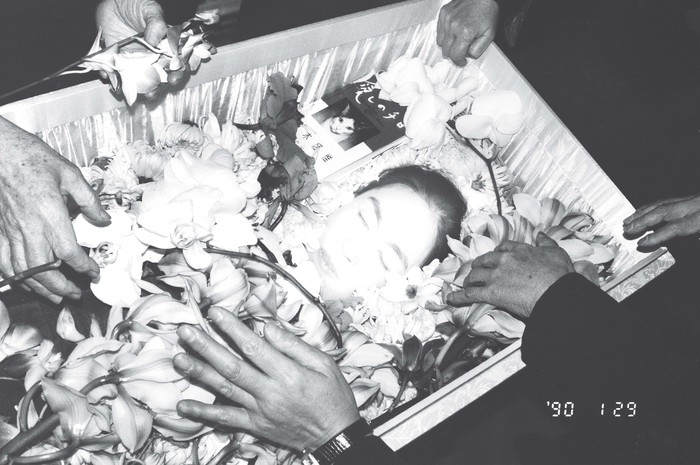 The pictures of loss and mourning—there’s a series of Eastern Skies, windswept horizons photographed from the terrace where Yoko and Araki used to entertain but which after 1990 barely got used anymore—are offset by images celebrating life. In Araki’s world this means Eros to counter Thanatos, but the way sex and nudity are included in Photography for the After Life differs from the usual Araki fare. In the recently discovered Alluring Hell series (shown above) the artist has painted over the prints, partly covering bodies and altering images as if he were using an analogue version of Photoshop. And the massive display of Polaroids, images instantly born but with a limited lifespan, makes for a fascinating tapestry of torsos, fruits, flowers and toys rhythmically interspersed with pink and blue misprints.

Satchin and his brother Mabo from 1964 is even more surprising. This series is absolutely vibrant. The then 24-year-old Araki, getting on his knees in order to level his camera with his subjects, portrayed two kids as the uncomplicated picture of exuberant joy and innocence. They laugh hysterically, do silly dances while pulling their hair, climb up ladders, and brandish their slingshots at the man who is pointing his camera at them. 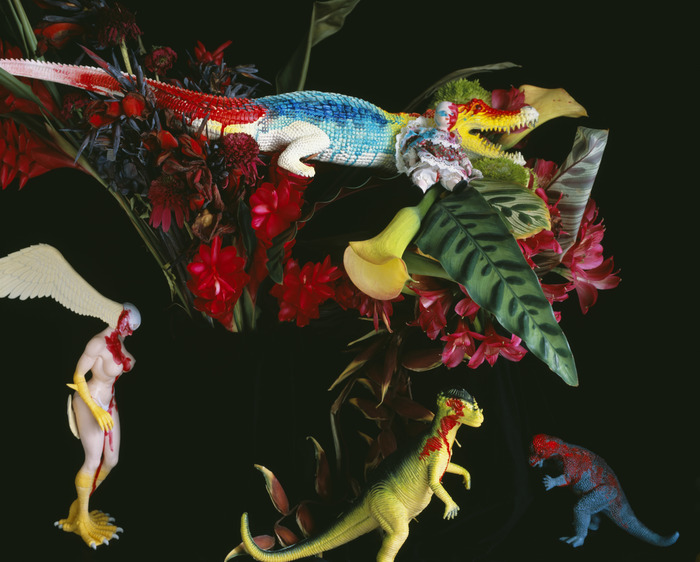 The most recent work, qARADISE, is gloomy again. Flower arrangements are familiar territory for Araki, but this time he doesn’t show brightly colored petals and prim pistils breathing a wildly sensual parfum. Like the P in the series’ title the world has been turned around. The flowers are wilting and have theatrically been placed against a pitch black background. The plastic toys they’re paired with—another Araki mainstay—are mostly dinosaurs, extinct reminders of time relentlessly moving on and leaving everyone behind.

Seeing such diverse works together, basically being served a cross-section of Araki’s oeuvre, some insights about the man’s work present themselves. The more Araki moved away from documentary style street photography and found his own language, the more staged and formalized his images seem to have become. His conceptual turn, focusing on a limited number of subjects, made him unique but also pressed some life out of his images. Of course, this is only true for part of his work and does not apply at all to his diary-like snapshots. But looking at these, one has to conclude that individually they’re not all that great. Sometimes the composition is dull, at other times there is no escaping the in-your-face genitalia, and some pictures are even out of focus. But together they form balanced stories of a life lived through pictures and as such they are mighty impressive. Would Araki’s passage to the afterlife depend on one picture alone, he would be stuck in purgatory forever.