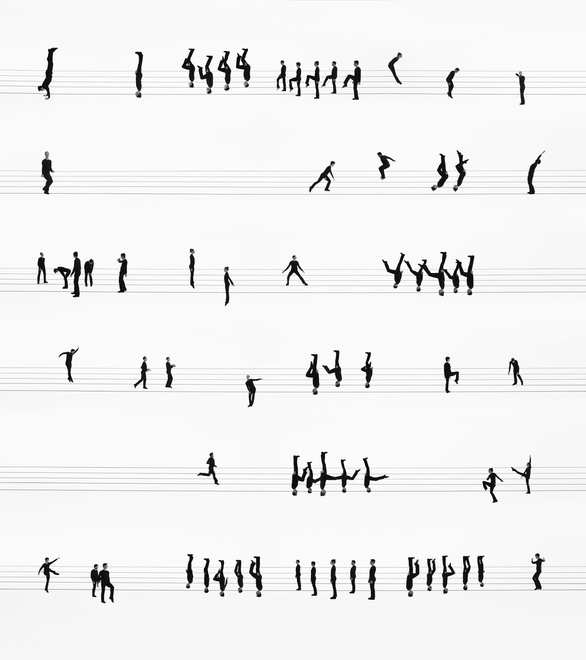 Making It Until You Fake It: A Day with Jaye Rhee

Guimarães, Portugal, Oct. 2014: When South Korea won the Golden Lion at the 2014 Venice Biennale of Architecture, architect Minsuk Cho said the award could help “trigger the reality of a unified Korea.” While North Korea is making art at the Mansudae Art Studio, South Korea is building the next generation of art stars—in New York. With Korean art increasingly in the spotlight, “The Lineage of Vision: Progress through Persistence,” which opened Wednesday at the Korean Cultural Service of New York, shows the top 15 Korean artists who have been working in America since after the Korean War ended in 1950.

New York-based Korean artist Jaye Rhee is featured in the show. Known for her eerie, black-and-white videos with dancers in which she collaborated with the Guggenheim award-winning composer Elliott Sharp, Rhee has a knack for optical illusions. She used chewing gum to create the falling petals of cherry blossoms, and creates ocean waves from blue yarn—she even spells out melting phrases in sugar cubes. Rhee creates layers of strips and visual trickery.

Her whole personality is abstract. She walked around the CAAA residency in Guimarães, Portugal, in a long button-up black shirt, black leather boots, and black shorts. “I hide the space to show the space,” said Rhee. Academic writer Carol Becker once said that Rhee’s work is the “real fake,” in that she makes work that constructs the real and fake.

Sometimes, it’s hard to tell which is which. The more you get into it, the more layers you peel back. Rhee chatted with me—saying what she means, or the other way around—about double meanings and musical notations, and the toughest part about New York. 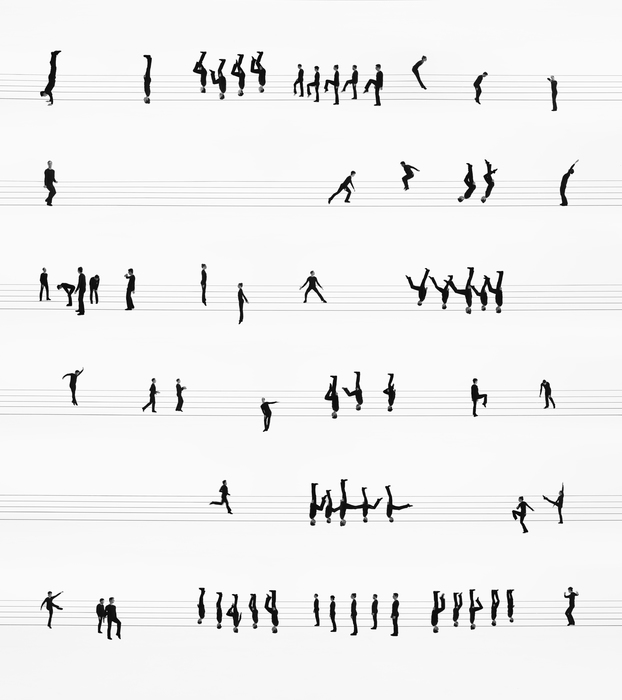 Nadja Sayej: What are you showing in the group show at the Korean Cultural Service?

Jaye Rhee: I am showing two photographs. The work is arrangement of movements on two-dimensional media. One of the work there looks like a music sheet with musical notes (but it’s actually dancers). It is not readable in the same way as how a typical music sheet is read. But at the same time, you can read it as a music sheet or play it as a music sheet if you put little bit of imagination into it. As you know, we all see what we want to see.

NS: What are your thoughts about being included in the show?

JR: I really do not think my work shows Korean-ness or what it’s like being a Korean woman. But it would be interesting to see my work in the collective history of it.

NS: In the Korean group show, you’re categorized as one of the new conceptualists.

JR: It’s a good try, they have a good ambition. I thought, why not?

The Flesh and the Book from Jaye Rhee on Vimeo.

NS: When did you move to New York?

JR: I moved from Chicago. I left Seoul early, so I don’t know much about the art scene there. But in 2005, I did a three-month residency and that was really the beginning point for me to experience Korean art. In 2009, I did another residency in Seoul. I was exposed to the art scene in Seoul almost as a foreigner. I look Korean, I am Korean, my parents live there. But I don’t really know how people act and what’s going on.

JR: New York is big, there are so many people, it’s made of everything. You don’t have to have one attitude.

NS: Was it hard getting your start in New York?

The practical things. It isn’t a gap between one city to another city, it’s a gap between what’s a fantasy and what is learned or attained—the step from art school to the real world. If you’re out of school, it’s nice to be in other cities and train a bit to be a good athlete, as if you’re a boxer. If you don’t fight where you are, you never will in New York. 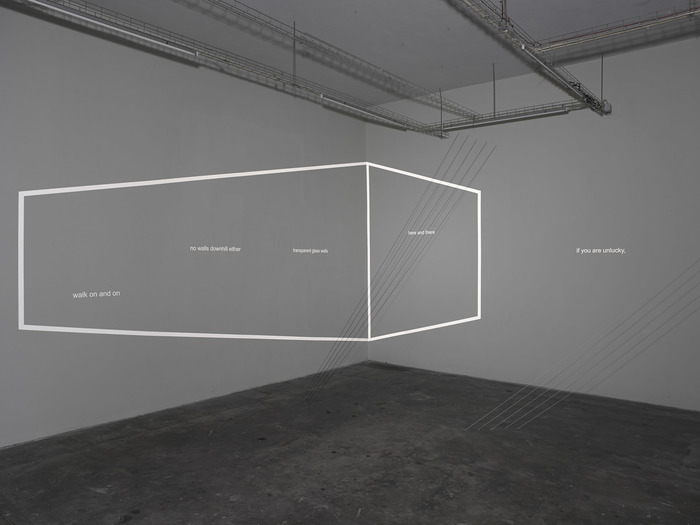 NS: Can you tell me more about the critical aspect of your Portugal show?

JR: I have been always interested in the loss and gain of the trans-mode of art making. For the exhibition at CAAA in Portugal, I wanted to give a three-dimensional space but in reality, the exhibition offers two-and-a-half dimensions, which brings back dancers to movement.

NS: Where does the text-based wall work come from?

JR: It’s a direct translation from a Korean poet who wrote a poem called “40-years-old." I didn’t use it just because of the age 40, it’s just a way to describe something. What she wrote was that 40 is an infinite space. There’s nothing—you don’t see anything just the space. But if you walk in the space, there is invisible glass and you hit your head sometimes. But you still have to keep walking.

NS: What is it that ties this show together?

JR: The only ways for people to follow the space is through the dancer’s movements. If they have to jump, they are jumping in between the strings. When you find their movements, you feel the space. I hide the space to show the space. It looks flat, but it isn’t. In this piece, I wanted the viewers to feel space again.

NS: Do you have a close relationship with abstraction?

Notes from Jaye Rhee on Vimeo.

NS: What was it like working with Elliot Sharp?

JR: In 2007, for my piece Notes, we collaborated. He made a composition to my video by recording the piano. For the piece, I only wanted to use the string noise. I asked him to collect and record all the string instruments he has, just the sounds of the strings. He gave me a 60 minute recording. I listened through the collection of string sounds and I collaged it.

NS: It sounds like a game, or maybe a sport?

JR: For me, it is like spinning in figure skating. You have to be in perfect balance in the middle. The two must maintain a balanced, yet, opposed existence.

ArtSlant would like to thank Jaye Rhee for her assistance in making this interview possible.

Posted by Nadja Sayej on 11/3/14
Tags: korean artists, dance, figurative, mixed-media, installation, video-art, photography
ArtSlant has shutdown. The website is currently running in a view-only mode to allow archiving of the content.