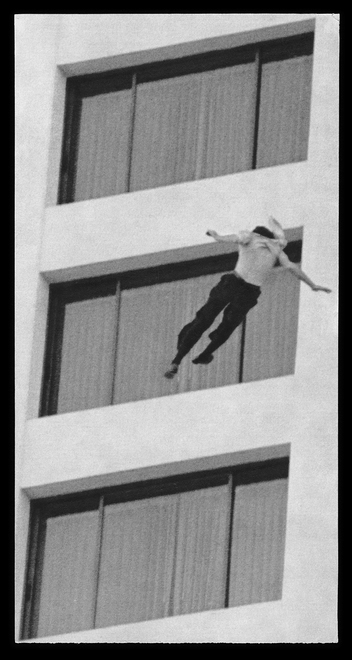 “Falling, rushing, ruining! buried in the ruins, on Urthona's dens”

Icarus’ father Daedalus made him wings and warned him not to fly too close to the sun. But Icarus, ecstatic with the ability to fly, forgot his father’s caution—the feathers came loose and Icarus descended to his death in the sea. This Greek myth can be literally interpreted as the human desire to overcome his or her limits. In psychology, to put it simply, this myth has been understood as a “mania” in which a person is fond of heights, fire, and water.

At the Art Institute of Chicago, conceptual photographer Sarah Charlesworth (American, 1947-2013) dedicated her series Stills to the mysterious behavior of “falling.” The series is composed of enormous black and white silver gelatin photographs of people, men and women, falling from buildings. The fourteen blown up 78-inch tall prints—six of which have never been shown before—are part of a single artist proof edition made especially for the Art Institute. Curator Matthew S. Witkovsky creates a composition that is fascinating, and also disconcerting. Each work shows a different person exposed to gravity: facing down, facing up, or sideways. In some images, the backgrounds are more legible than others, some more abstract than others. Are they real falls? Suicides? Acting? Though the images are revealed to have come from various media archives, the viewer ultimately does not know the cause of action and it becomes distressing. An elegant catalogue accompanies the exhibition, where Witkovsky writes that it is unreasonable to “disconnect Stills from the terrorist attacks of 2001 even though the original pictures greatly predate them.”[1] While Charlesworth’s images do not aim to distance themselves from horror, they also do not look towards a specific historical or social event. The photographs are the fall itself.

Charlesworth has long-since been interested in the in-between stage, a place amid two states of being, which in this exhibition could be seen as Heaven and Earth. In 1979, Charlesworth went to news agencies and the New York Public Library to ask for photographs of people falling in fires and suicides. In other words, she was asking for people falling or flying, which at times sounds the same. Unfortunately, like Icarus, we will always need external assistance in order to achieve flight. Or in the words of Peter Greenaway, “Alas, the best we can do is fall and believe ourselves flying.”[2] 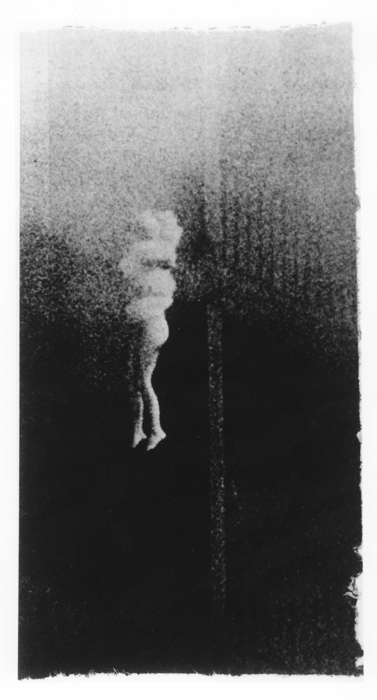 Charlesworth’s images are tragic. While they are abstract, and in a way distant from reality, it is obvious that tremendous hardships led these people to decide to jump, fly, fall. But there is also another dilemma within these images—the question of the media itself. Who took these pictures in the first place? Were they able to help the person falling but instead decided to snap a photo? How were so many images captured before the time of the iPhone? In the gallery, you could hear visitors quietly reacting: “Wow,” “Is this real?” “I’ll wait for you outside,” and “this is not a 9/11 image, is it?” It only took the public a minute or less to feel uncomfortable. Visitors who had trouble looking at the works might argue that it does not matter that the works are conceptual, because one can still see the person falling. However, the large size of the images forces the viewer closer to the person falling in the photograph. It also allows “viewers to imagine themselves stepping into the picture.”[3] There is a mocking perversity in the depiction of a person falling. Flight violently contradicts those two states of being: living and dying.

Witkovsky, as well as activist Kate Linker, claims that these photographs are abstract. Which is to say, we do not know what is actually happening in them. For most of the works, we do not even know the identity of the person falling. Who or what is waiting for them on the ground? Do they die? After selecting a number of images, Charlesworth cropped and manipulated them to the extent that some appear more abstract than others. For example, Jerry Hollins, Chicago Federal Courthouse appears as a blurry figure falling sideways in between waves of motion in black and white. Additionally, nine of fourteen are captioned as “unidentified” solitary individuals falling from heights. Regardless of whether the works specify a location, they still feel incomplete. Even when the person’s name is revealed on some occasion (Jerry Hollins, Vivienne Revere, or Dar Robinson) we do not know who they really are. What exactly are these images showing us, and for whom are they intended? One thing that is certain is that Charlesworth did not want her images to be reduced to a news story. 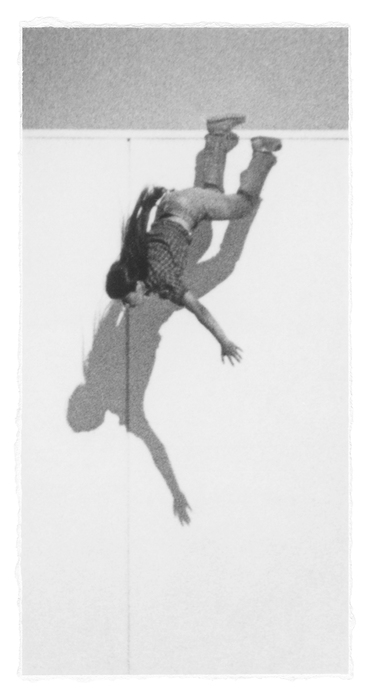 Charlesworth’s manipulation of the archival imagery is embedded within the very violence it seeks to investigate; these tools of vision are inextricably intertwined with the history of “falling.” The ambiguous imagery she generated systematically hides the reality it attempts to address. The artist hoped that with Stills, our feet would not leave the ground, but our minds might. The philosophical questions Charlesworth's Stills pose are interesting: imagine trying to fly without being prepared, trying to swim without water.