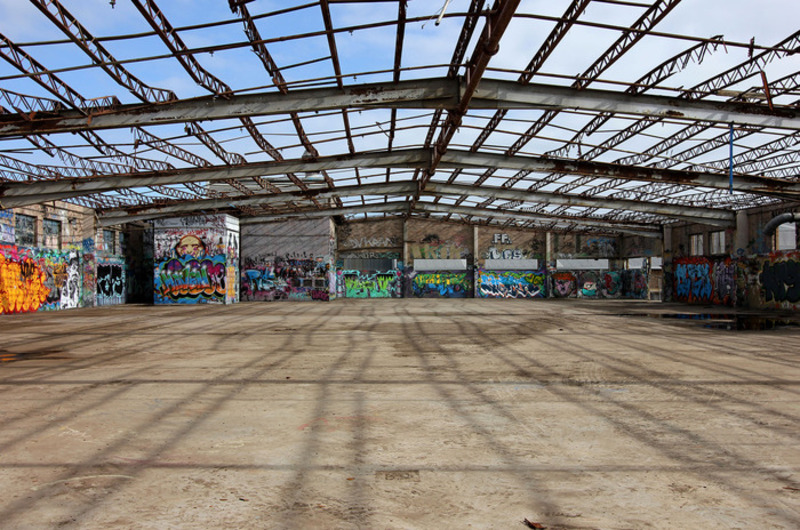 Can You Understand Graffiti without Breaking the Law?

Growing up in an urban metropolis such as New York City, street art and graffiti had always been an inescapable part of everyday life. Catching a glimpse of Chinatown’s rooftops during a morning commute over the Manhattan bridge, driving along the narrow streets of the Lower East Side, passing by 5Pointz in its glory—it is never difficult to find traces of the local artists’ reclamation of public space once your eyes are opened to it. The distance, both literally and figuratively, from which we view this work however, alters the way we perceive it. When it comes to illegal graffiti, does one really experience the work without first understanding the risk, rebellion and energy that drives it? Can a historian or critic accurately convey this movement if they remain a voyeur looking in from the outside, safely distanced from the shadows that define it?

After recently moving to Australia from Brooklyn I found myself immersed in an entirely new urban environment filled with artists and writers who were no longer familiar. Rather than doing my researching online, I decided to introduce myself to Sydney’s street art and graffiti scene through a little urban exploration of my own. 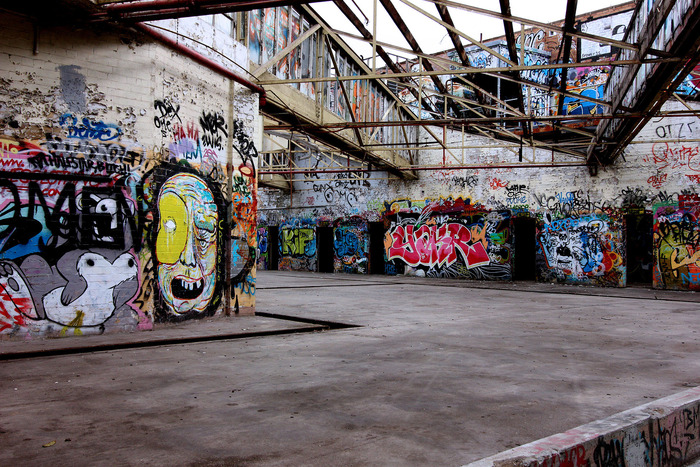 On a cloudy Sunday afternoon—mid-winter in Australia—two friends and I jumped on the train to Alexandria for the old Dunlop/Slazenger Factory. As we exited the station in inner-west Sydney, the neighborhood’s warehouses and scrap yards offered rows of large-scale, surprisingly barren walls with little graffiti, street art, or commissioned murals to be found.

From its exterior, the Dunlop/Slazenger Factory does not appear to be anything more than a typical industrial building with dilapidated brick walls covered by a few quick tags, roller pieces extended from the rooftops and, of course, the property owner’s bright orange “Do Not Enter” signs stenciled around the façade and surrounding fencing. From outside, it is hard to understand the energy concealed within this abandoned building's walls. At this distance, we were voyeurs peering through. Once a glimpse is caught of the color that spreads across the factory’s interior, however, it is hard not to be consumed by an intense need to get inside.

I wish I could say our entry was easy. I'd acquired a few of my own dicey experiences getting into illicit spaces while out in NYC with street art and graffiti friends—from tearing my meniscus after a night hopping around Icy & Sot's roof in Bushwick to talking my way out of being arrested with Rusk in Chinatown’s alleyways—but we seemed to be out luck this Sunday afternoon. Patched up holes in the barbed wire fence and empty cans of spray paint were taunting reminders of others who had succeeded before us. Out of desperation, the three of us even traversed through the dark sewage way that passes underneath the factory grounds only to find that our light at the end of the tunnel left us wedged in a narrow gap somewhere between two of the factory’s buildings—still unable to get inside. With every dead end we hit, a little more of the interior became visible and our determination grew stronger. We were on the hunt. Our desperation overpowered the initial fear of getting caught. Suddenly, a new layer of the artists’ process became clear; as we continued to climb, duck, and scour around the property grounds, the same graffiti originally seen from outside was now pulsing with our own adrenaline. Of course, in the end, the answer to getting inside would end up being all too simple. 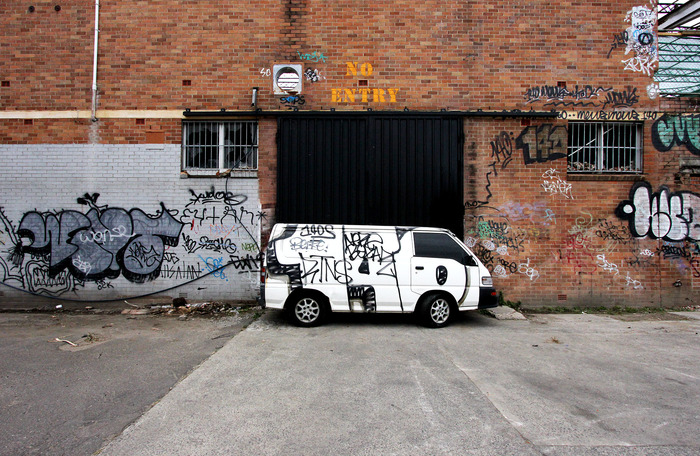 Once inside, the abandoned factory was our own. Walls filled with graffiti turned into multiple floors, courtyards and buildings for us to explore. Years of artists and writers who visited this factory became evident in the layers of paint that had built up and began peeling away. The dampness over Sydney finally began to clear and suddenly two men appeared in the second-story room where we stood.

Initially our groups approached each other nervously; having the place to ourselves for some time already, we were startled to run into anyone that afternoon, but the familiar sound of Ironak spray paint clanking in a cardboard box told us they were not police. “Do you mind if we paint?” they asked as we all met in the roofless expanse. 4gots and Ouch, two Sydney-based writers, put down their bags and boxes of paint as they began working on two adjacent walls. We talked of “bad behavior warrants,” our love for the smell of fresh paint, and favorite writers, trying to keep our voices hidden from pedestrians on the street. By entering this culture that may have been foreign to us before, not being writers ourselves or even from Sydney, the distance between the work and us was as short as it could ever be. An unspoken trust between the two groups formed knowing that at this point, if anyone were to show up, this day would end the same for us all.

The game of trial and error, the risk associated with being on one side of the “Do Not Enter” wall versus the other, our hunt for the perfect means of entry—everything we experienced that day changed the way we viewed the work hidden within Sydney’s abandoned factory. We were no longer voyeurs looking in from the outside. A new layer of fear, excitement and rebelliousness in the work suddenly revealed itself in a way that would not have otherwise been experienced. On that Sunday afternoon in late July, our concern was entirely focused around the experience. In a movement where the action (i.e., the act of “getting up”) is in many ways as important as the final piece that is a result of this action, the experiential and subversive elements of their work cannot be ignored. This is not to say that every street art and graffiti enthusiast should be out there climbing billboards to see the latest ad takeover from the artist’s point of view, but a distinction needs to be made by critics from which distance they are interpreting the work.

To accurately understand the graffiti movement, one needs to be prepared to physically enter the artist’s urban playground in order to experience the culture within its original context—at your own risk.

(All images: Dunlop/Slazenger Factory; Courtesy of the writer)