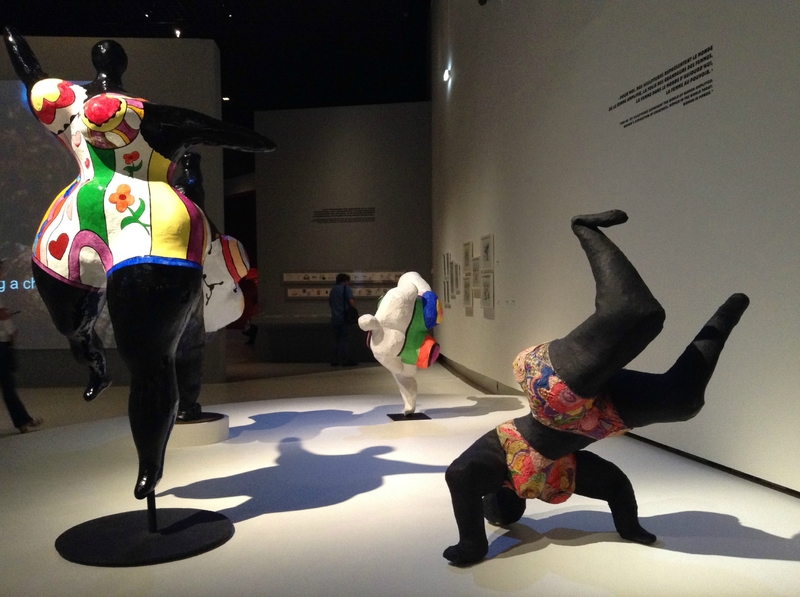 Niki de Saint Phalle: Are her Nanas Too Sexy?

It really is a crying shame that Niki de Saint Phalle wasn’t crooked of back, thick of brow, dull eyed with pustulant skin, lank hair, an uneven gait, and a voice that sounded like a hoarse crow hacking its lungs up. At a push I’d even settle for poor and dull witted, but she wasn’t; she was pretty and rich and aristocratic.

Now, there is nothing wrong with this—she wasn’t the first and she won’t be the last artist to come from this milieu—but there is a problem when her huge and comprehensive retrospective is so liberally plastered with her, it must be said, quite adorable mug (fine-boned, clear-skinned etc.) that it gets in the way of taking the work seriously. Oh the irony!—I declaimed internally—that an artist so engaged in her own charmingly naïve brand of '60s feminist utopianism should so enamour the curators of her own exhibition that one wonders just what we’re all here to see. I ask, was it really necessary to include her face adorning the cover of Vogue, or in a swimsuit (LIFE), or sporting those wonderful Cartier diamonds? Did we need to see quite so many earnest, paint-splattered interviews displayed so prominently? The brave (and cute) Niki staring dead-eyed down the barrel of her rifle?

The difficulty, of course, is that it makes it hard to take the work seriously. No, I don’t believe that pretty girls can’t be talented at something other than being pretty, I just think that if they are talented then we perhaps don’t need quite so much of the pretty. Oh, world…

But what of the show? That’s a difficult one. As a body of work it’s coherent, colourful—joyful even—naïve, striking: it has something to say. It reflects its time and it addresses issues both personal and private, and, as a retrospective it is comprehensive. There are lots of rooms, covering the whole of de Saint Phalle’s work and output.

The problem for me is that the work itself feels derivative. It’s good, enjoyable to look at, not a waste of time; but maybe it’s as simple as the fact her influences are too apparent. There’s a touch of Gaudí, a pinch of Miró, a hint of Matisse, and not a little of Heinz Edelmann thrown together—and they never quite become her own. 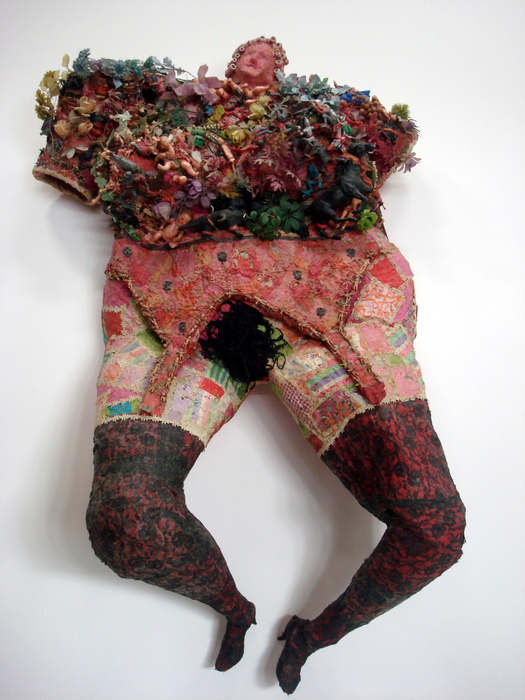 The strongest works are unsurprisingly the "Nanas" and particularly the earlier ones, before they became smooth and shiny. It’s here, with the adornment of found objects, that she demonstrates her talent with colour and composition. And it is a real talent. I found them to be complex and moving pieces of work. Although, in contradictory fashion, my favourite of all was a later one: it had the expression of a disgruntled granny. And what more fitting example of feminine power can be found in the world? I’m not sure.

In a final sad irony, and continuing the contradictions of this show, I was struck by the fact that the term "Nana" has relatively recently appeared in French slang, meaning "tits." It is also used, invariably by gel-haired, tracksuit-and-fake-Vuitton-Man-Bag-toting types, to mean "girlfriend" or "girls" in general (normally while they stand casually vaping on the platform of Gare du Nord—this, or in a gang on the Champs-Elysées mocking the rollerblading cops).

Among the general joy of this show I did get the feeling that de Saint Phalle was a tragic character, albeit a brave one. We should all offer thanks that she didn’t experience this final indignity.

Under the Radar: Super Pop Boy | Leonard Zinovyev | Taco Eisma
1/10/19
COMMENTS (5)
bad art speaks for itself.....bad biography...
Amazing for someone who never paid a cent of tax in France where she lived her whole life (no taxes for that matter) - how much the French government is spending on this extravaganza and other shows throughout France. Her foundation is a joke. And her tale of incest also invented. All you got left is her looks?
Comment by: dannemois on Tuesday 09/23/14 at 4:43 PM
Love her all as she is!
She is fun! What more can you as for? As for "And what more fitting example of feminine power can be found in the world? I’m not sure. " Come on if you really try, I m sure you can come up with something...Cheers, Terry
Comment by: Terry Harms on Tuesday 09/23/14 at 2:05 PM
looks aint all
That Warhol looked much like a can of soup nobody ever bothered. But if a woman looks pretty in the eyes of man and women, it can stand in the way (if taken along in an exhibit). Totally irrelevant. Just look at the work and comment. Thus, if you look at my The Sea at Ponte d'Allure, you really see the tattoo on my belly. If you see my Ensemble de Creatures, you see my brain in action. Therefore, if you would reviewed my retrospective at an exhibition, don't get distracted by my good looks, says Drager Meurtant
Comment by: Drager Meurtant on Tuesday 09/23/14 at 10:32 AM
commercial -superficial exhibit
I couldn't agree with James more- he is spot on. Show moreover, really about the French and some of her galleries trying desperately to relaunch her market/sales. Poor show that tries too hard to make her a feminist and political figure- which is debatable at most with her oversexed "blackface" rosy- that by today's standards would be blatantly racist. Not to mention her shooting which was the idea of then boyfriend Tinguely- she married and dated well!
Comment by: dannemois on Tuesday 09/23/14 at 8:21 AM
Hi James I was sorry to read your comments about the looks and birthright of Niki de Saint Phalle. This is what she was born with and her artistic identity is born of this - without prejudice. I don't feel that looks-ism has a place in serious art reviewing. I haven't seen this particular exhibition but I admire her work no matter what her attributes or financial status. Perhaps if her image appears in a way you dislike, your comments may reflect more pertinently to the curatorial decisions that have been made and which distract you. Nonetheless, reaction to her 'prettiness' she will have been very much aware of and probably created internal tensions that contributed to her output. Artists respond to their external responsees always, from Van Gogh and Toulouse Lautrec to Warhol, Jeff Koons, some obvious examples.
Comment by: Eli Acheson-Elmassry on Tuesday 09/23/14 at 7:37 AM
ArtSlant has shutdown. The website is currently running in a view-only mode to allow archiving of the content.