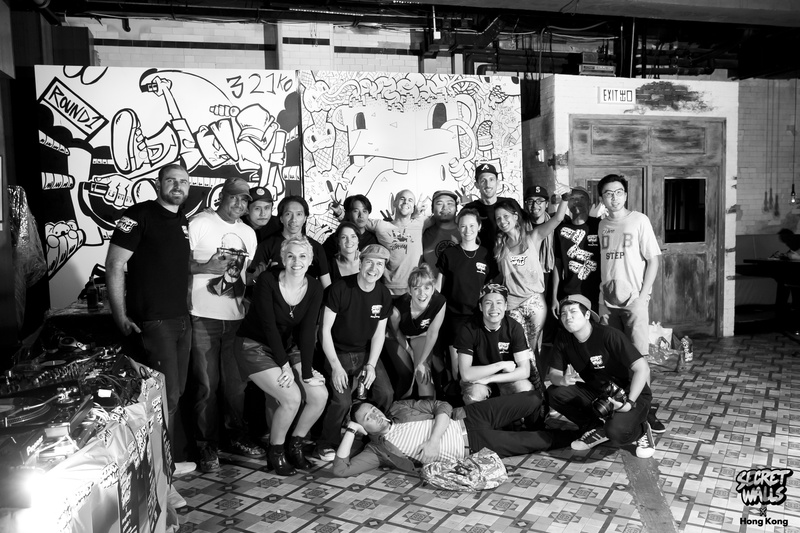 Billing itself as “the World’s premier live art battle”, Secret Walls recently kicked off its second series in Hong Kong at the city’s iconic Fringe Club.

Created in 2006 by Terry Guy at a bar in London, each event features two white walls side by side, 90 minutes on the clock, booze, a live DJ and two artists with the mighty black marker for battle. The winner is chosen based on a 3 point system, with input coming from judges and the all-important crowd vote, scientifically measured by a decibel reader. In epic fashion, the yearly event spans 5 months with four qualifying rounds, two semifinals and finishing with the grand finale in December, where the series winner is announced. 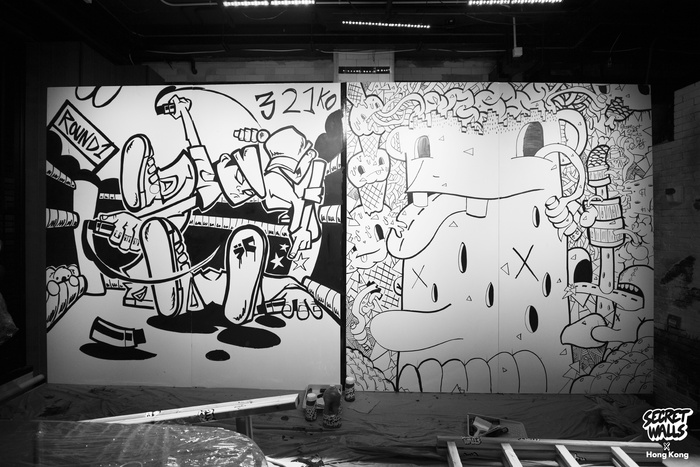 From its humble underground beginnings, Secret Walls has grown internationally via social media and word of mouth marketing with similar events taking place throughout Europe and NYC. Showcasing an impressive mix of emerging and established artists from all walks of street art life, the battles have a decidedly unique and raw feel. In Hong Kong, it’s nice to see the passion back in original local art, especially as it is lacking a price tag.

Hong Kong’s sold out event paired local artists Alex Wong and Jay Cawdell against each other in what proved to be a spirited competition of live performance art.

Cawdell, who participated in Hong Kong’s inaugural Secret Walls last year, drew inspiration from the present battle, creating a scene starring himself and his opponent in a final throw down. With his trademark style of heavy dark lines and solid, clean shapes, Cawdell proves a formidable opponent to the most established of street artists.

Meanwhile, Wong seemed to defy time, creating a highly detailed mural in the allotted hour and a half time frame. His work took a more imaginative theme with ice cream cones and a supporting cast of characters in an old school style, while impressively filling the entire white space with even the smallest content. 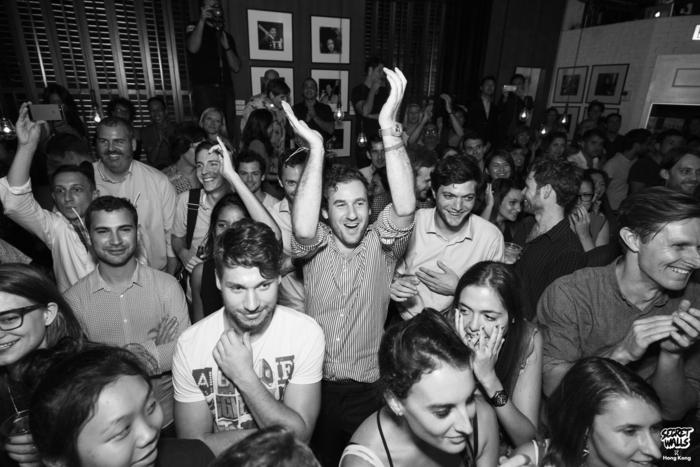 Sponsor Absolut Vodka and MC R VEE kept the crowd pumped throughout the night, with the latter officially announcing Wong as the winner of Series 2, Round 1. He will now move on to the first semifinal in November, battling a yet to be determined artist of equal skill.

Post battle, the walls are (sadly) painted over so you’ll have to attend the event in person to experience the thrill of art being created right before your eyes. Pick up tickets to Round 2, set for 8 September, here.

(All images: Courtesy of Dee Wai and Josh Law for Secret Walls)