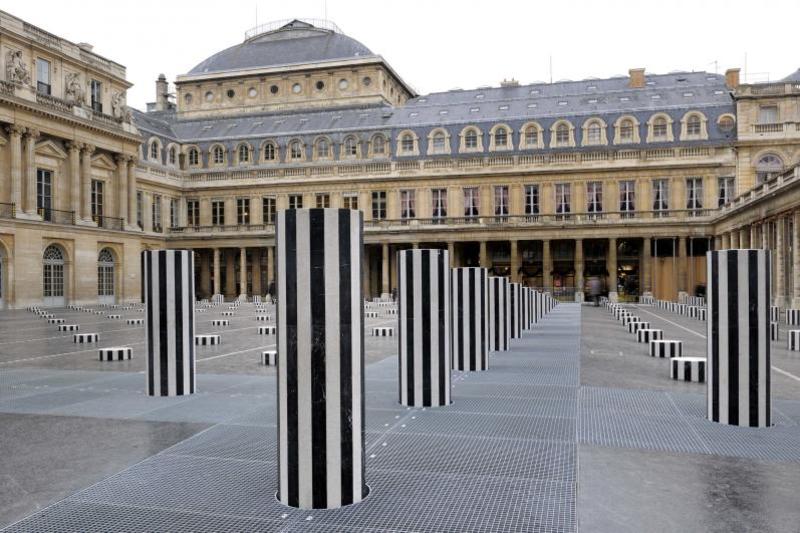 Given that we are in the zombie month of August when most galleries are closed, your faithful correspondent decided that it was time to go and check out some permanent public art: Daniel Buren’s 1986 installation Les Deux Plateau, apparently more commonly known as Colonnes de Buren. I’m assuming that for such a worldly audience as ArtSlant’s, these titles need no translation.

But what is it? Well, it’s a grid of 260 candy-stripped columns, in a grid of candy-stripped lines in the 3000-square meter courtyard of a former royal palace, now a fashionable shopping arcade (a more fitting use of the term "shopping arcade" I challenge you to find). The majority of the columns are of uniform height (albeit with variation in a double cruciform pattern) and on one side, where the ground falls away, the columns maintain their height relative to the others. Furthermore, along the three lines of the double cross a metal grid runs over a sunken trench—apparently some kind of ventilation system—and here the columns extend below the surface. 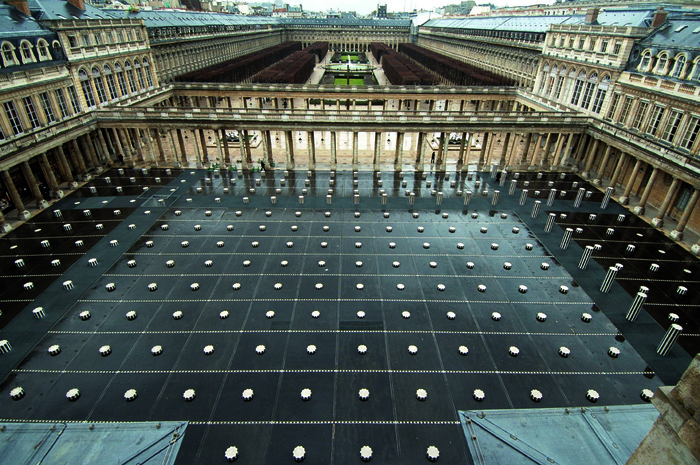 As research for this article, I took to the time to sit in the courtyard and look at this piece of work. It is impressive. It’s not invasive; it’s quite quiet, yet it manages to manipulate and blend with its context, to reimagine it and create something special in a site that was previously a car park. The grid delineates spaces and zones; they open the courtyard and make one more aware of its scale. The above ground/below ground movement of the columns emphasize the architecture of the city, the extension into unseen structure. They are also jaunty—there is something cheerful about the stripe, isn’t there? And as I sat and looked at people jogging by, business people on phones, nannies pushing prams, tourists taking photographs, I thought—this is an unusual thing, isn’t it? A piece of public art that isn’t monumental, that people pass on a daily basis as part of their normal interaction with the city, and yet it doesn’t disappear into the background? 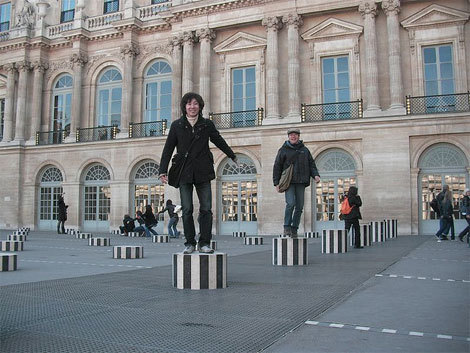 Of course, there is something to be said about Buren’s conceptual statement of limiting himself to stripes 8.7 centimeters wide and so on. How such a small formal mechanism can be made to serve great purpose… etc… but, as I sat there, I realized that really none of these people care about this. I don’t think they care about the words or the cleverness that can surround this work, and so, in a sense, I didn’t think I needed to. The single most remarkable thing about this work for me is that people basically do the same thing when they enter it: either they walk through and look at it, or, if they are going to interact with it, they climb on top of a column, and all, more often than not, for the purpose of taking a photograph. The more adventurous sorts try and climb on as high a column as they possibly can, and the tallest, at about 1.5 meters is just about as high as a relatively healthy human can climb (someone who isn’t a specialist, that is). Then, when they have mounted their column, whether for a photograph or not, they turn and smile at the people who are either also standing on columns or standing down below on the ground looking up at them. It is a smile of simple pleasure.