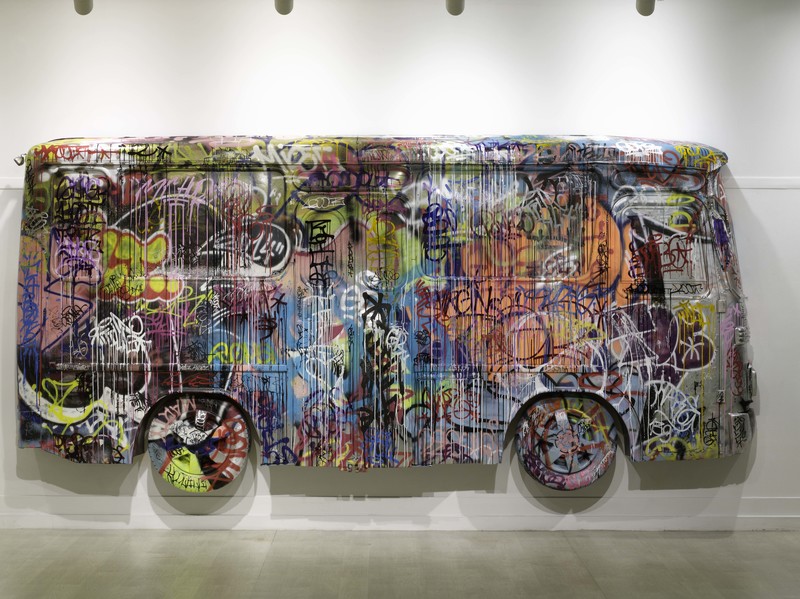 Language of the Wall: Istanbul’s first exhibition on graffiti and street art

Graffiti and Street Art in a museum setting have a new audience, at the Pera Museum in the Beyoğlu district of Istanbul. Curated by the museum’s Roxane Ayral, “Language of the Wall” is the first exhibition of its kind in Turkey to bring graffiti indoors in an academic setting, taking over three floors of the private museum. For its introduction, Ayral has chosen an impressive roster of international artists as well as familiar locals to educate the Istanbul art connoisseur, including Futura, Carlos Mare, Cope2, Turbo, Wyne, JonOne, Tilt, Mist, Psyckoze, Craig Costello (aka KR), Herakut, Logan Hicks, C215, Suiko, Evol, Gaia, Tabone, Funk and No More Lies, plus photographs from the archives of Martha Cooper, Henry Chalfant and Hugh Holland. Along with the museum exhibition, Ayral has extended her street art lesson into the city proper, bringing murals by most of the artists to legal walls in neighborhoods scattered across Istanbul.

Being a relatively new movement in terms of art history and recognized by the art market in terms of monetary value only recently, street art has progressed in a sense; yet this attention and acceptance has come at the dismay of some graffiti purists, who find work done in the studio or on canvas to lack the authenticity or spirit that street pieces have. With this in mind, Ayral chose to set “Language of the Wall” apart from other museum shows. Instead of presenting each artist’s studio work, she has turned over the museum itself, having each artist create a site-specific work directly on the walls. The effect is less stoic than a traditional show of rows of canvases inside a white cube; it brings the viewer face to face with each artist, each mural dwarfing the visitor into an immersive experience with each piece. Being that Istanbul and the Pera Museum are late to the game, perhaps Ayral learned from the mistakes of exhibitions already past. But either way, her choice to use the pristine private museum walls itself as a giant canvas sets “Language of the Wall” apart from being “just another street art exhibition.”

Mist; Courtesy of the artist and Pera Museum

At this scale, and without the confines of the distance between the viewer and the canvas, visitors can examine the detail and work that goes beyond just tagging. For example, stencil artist Logan Hicks’ pieces for the show enable a better understanding of his intricate and painstaking process by allowing visitors to go nose to nose with his multi-stencil layer murals – which are unusually crisp on the museum’s carefully gessoed wall, rather than a textured wall of the streets. The same goes for C215, whose multi-layered portaits of his daughter Nina are accompanied by a film about the artist’s journey from painting illegally to using his art for social justice. French artist Tilt brought his own bus to the Pera, installing the bisected vehicle directly on the wall before creating his masterpiece. It is hard to believe that Mist’s enormous abstract wall, which shows a trompe l’oeil of highly magnified spray lines, was painted with spray cans. In this multi-colored mural, the artist has shown his expert can control, with precise, purposeful lines and edges.

British duo Herakut’s piece is an immersive environment, adding cardboard, photography, neon and drawing to their iconic figurative renders to create a powerful installation that pays tribute to the origins of street art (including a distorted photograph of the artists with New York icon Futura, which appears as an upsidedown metal pot on the head of the main figure). This piece is a stand out in an already impressive show, showing Herakut’s abilities to add more layers to their powerful work in a gallery setting. Futura’s piece itself seeps into Herakut’s installation, before it blooms into the artist’s signature abstraction in bold red, black and white.

Another artist evolving beyond painting is Carlos Mare, aka Mare139. Mare has taken inspiration from his early days of painting New York City subway cars in the 1980s to the third dimension, translating the loose stylistic loops of tagging into abstract swirls of curved metal. The hanging sculptures have the curvaceous characteristics of a graffiti tag, giving them the appearance of being lightweight, even though they are made from layers of different textured metals. The resulting sculptures can be read as both abstract and having graffiti origins, changeable by the context in which they are presented. 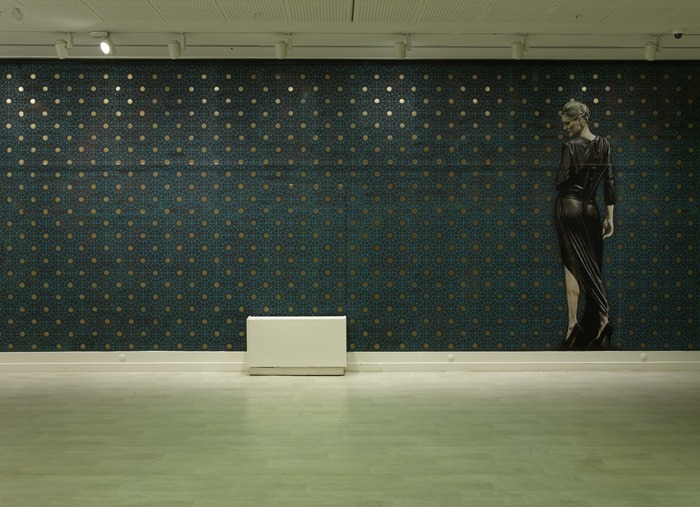 Logan Hicks, Courtesy of the artist and Pera Museum

To accompany these freshly painted site-specific pieces (and to give breadth to the education process) are documentary photographs by Martha Cooper, Henry Chalfant and Hugh Holland, who captured the iconic beginnings of graffiti culture in the 1980s.

“Language of the Walls” may gain attention as being Istanbul’s first exhibition on graffiti and street art, but it holds its own, too, as an extensive and experiential exhibition of the medium.

(Image on top: Tilt; Courtesy of the artist and Pera Museum)