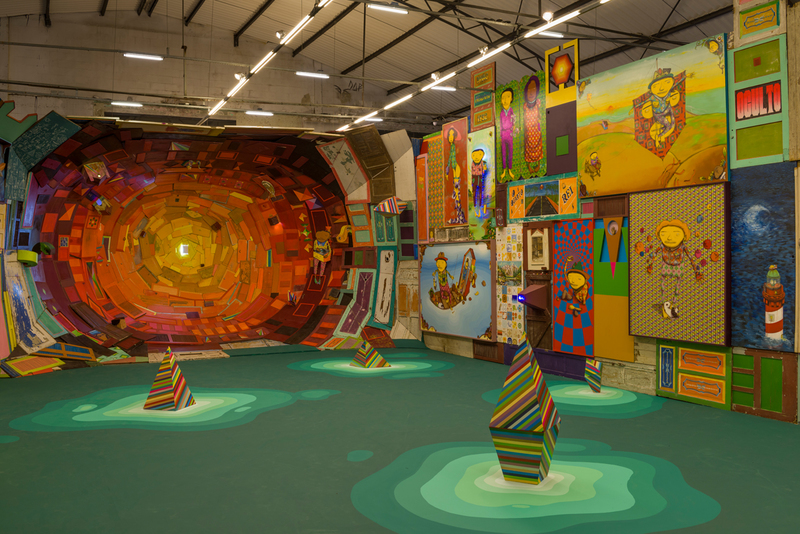 Give in to the Dream: OSGEMEOS Moon Opera

The new project of OSGEMEOS in the Fortes Vilaça Gallery in São Paulo is an experience of vertigo that leads directly to the unconscious. Entering the first room of the exhibition one is faced with dozens of their iconic yellow people – their signature image – plus a variety of other characters, spread through countless paintings, sculptures and installations, assembled next to each other to form an immersive environment. In the center of the room a vortex made out of doors of all sizes seems to pull all these characters along with the viewers into the dream-like universe created by the duo. The vortex epitomizes precisely the moment in which we are about to fall asleep and fall into unconsciousness, with the doors representing a passage to other dimensions. 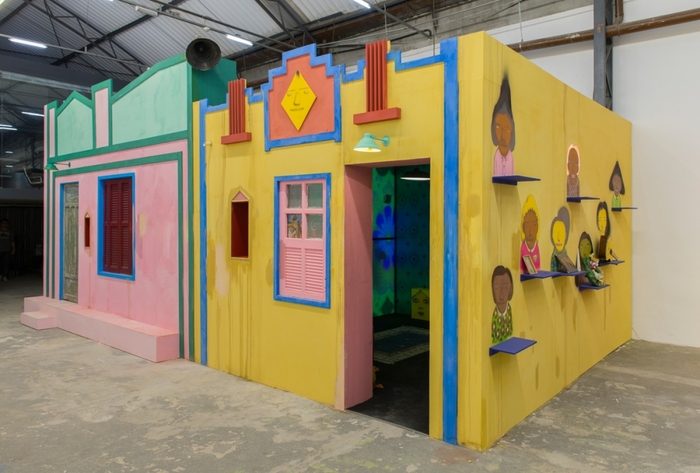 The doors and windows always present in their works are also a point of contact and a connection between seemingly disconnected pieces. Even though each artwork contains a story and is a world in itself, small doors and windows sometimes denote a passage and an entrance into the world represented in the next painting, each work containing the key to open the door and understand the next work. “Everything is connected”, they say, leaving clues all the way along, giving the public a sensation that there is an erratic underlying narrative being drawn in front of our eyes. The public can identify references to Brazil’s folk art and northeastern culture, but are still unable to identify the story, or stories, being told.

The overwhelming profusion of colors, shapes and pictorial styles makes the attempt to understand this narrative an exhausting task though. Soon enough, the observer is compelled to give up on any effort of rationalizing or interpreting and we surrender to their surreal landscapes and recurrent imagery. By then we start noticing the dreamy sensuality of the characters with fluid contours including some nude female figures, which stand out in the middle of the predominantly masculine yellow characters. Despite the nudity and sensuality they also preserve an air of innocence, that permeates the entire current production of the artists. 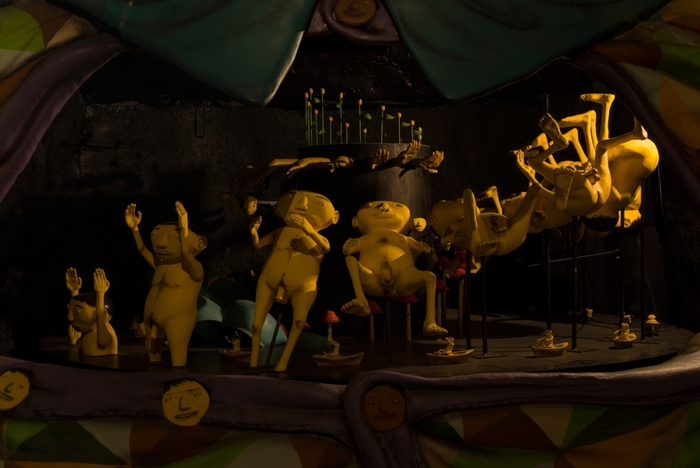 Passing through a small door in the corner of the first room, we enter another space where we find the big surprise of the show: a giant 3D kinetic sculpture in form of a zoetrope, which gives life and motion to the OG iconography. Surrounded by ocean and moonlight the installation features a soundtrack composed in partnership with Ben Mor and DJ Zegon. The result is striking and absorbing. Our minds take a little while to believe the reality our eyes are recording. Looking at the piece for the two minutes it is in motion, one feels like being on the other side of the vortex represented in first installation and inside of an oneiric dimension where the surreal becomes tangible.

Leaving this space still slightly unsettled the public is presented with another installation reproducing a child’s bedroom whose walls consist of a video. This interactive installation allows the viewers to deviate the patterns of its itinerary interfering in the way the artist’s images seem to be drifting in the screen. 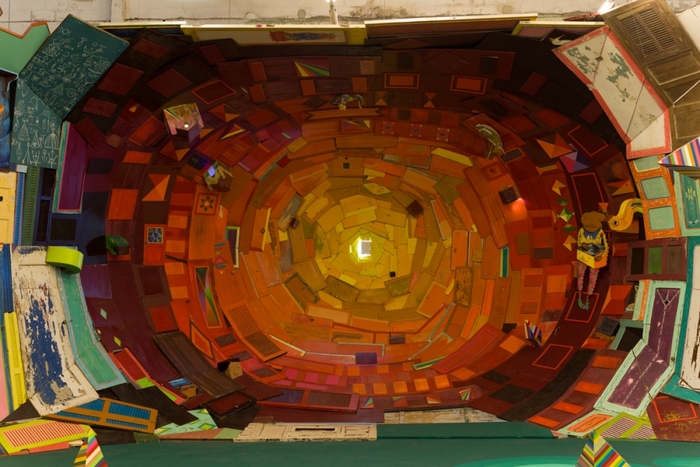 Far away from the urban chaos that marked their first years of production, Moon Opera seems to further consolidate the unique aesthetic language for which the duo are recognized worldwide. The migration of OSGEMEOS’ work to traditional exhibition spaces has allowed them to experiment with new supports, material and techniques and create environments where people could penetrate their works – and minds.

Even though they continue to use spray paint, their work can hardly be defined as street art these days. The work of OSGEMEOS is now better understood in relation to other artists such as Yayoi Kusama, Jean Tinguely and even Frida Kahlo (as the official press release points out). Their magic realism, the excessiveness and obsessive recurrence of their iconography recreates a distinctive universe of that of the streets, a sensual, kaleidoscopic universe that appeals to all sorts of publics, especially to those who lost their capacity to be carried away by imagination. Like it or not, it is impossible to leave the Moon Opera without being taken by it all – if even for a brief minute or two. 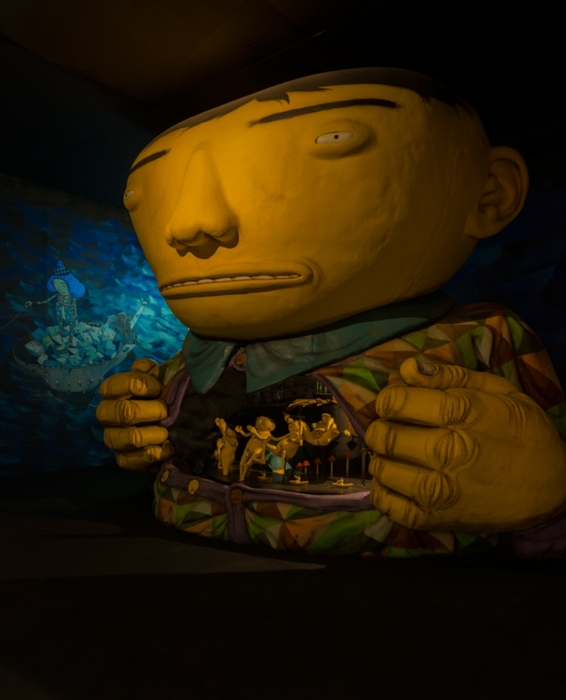 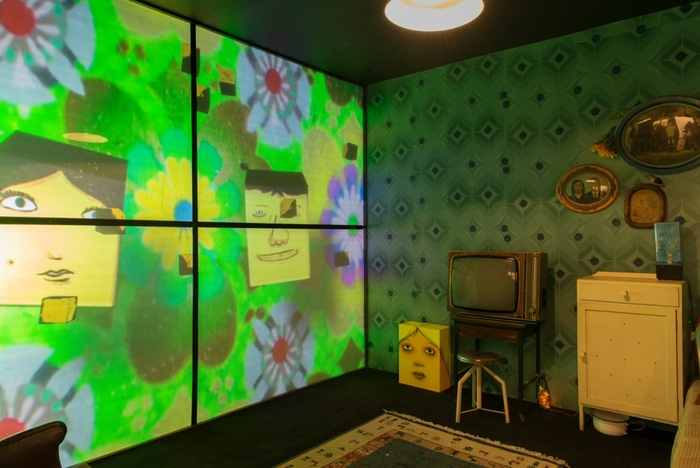 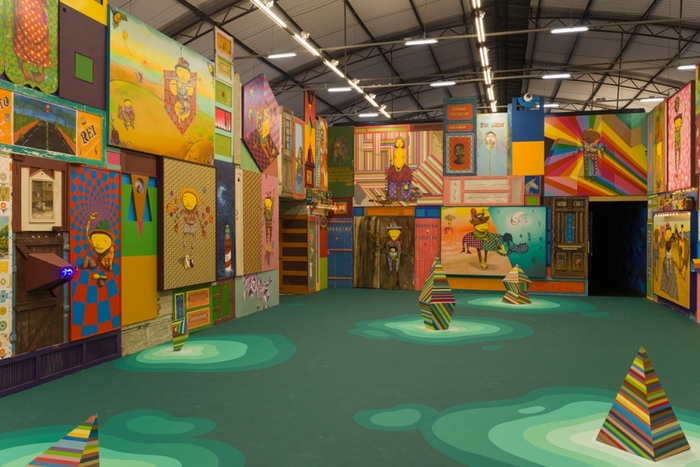