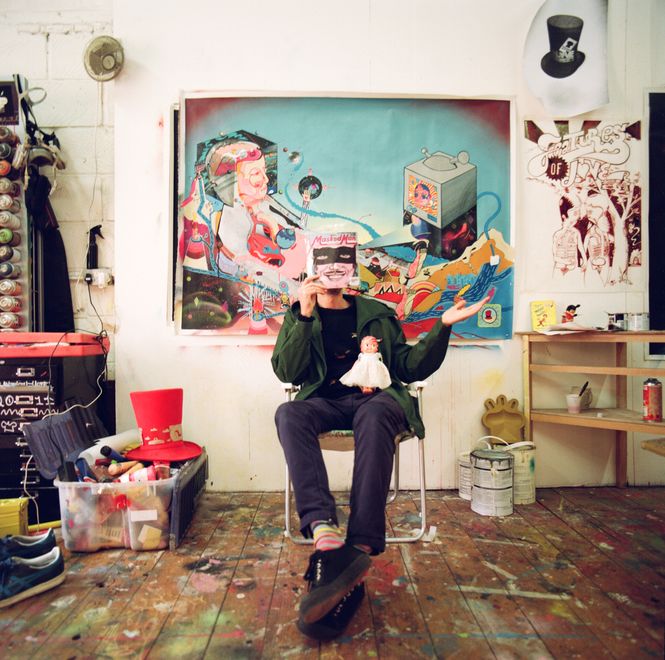 Down a street off Soho Square a booze-soaked, rambunctious crowd piled out on the street. It was one of those rare summer evenings in London – somewhere between sweaty and balmy. Squeeze past the well-pruned bloggers, pogonophiles and the members of the banksy-forum cult, into the airless gallery, where the hundred-odd guests had impregnated the air with the scent of their sweaty-balmy bodies.

This is the Sickboy effect – bringing a bit of griminess and a glaze of stickiness to make everything a little surreal. The added odourous dimension was an apt accompaniment to the upstairs gallery, a series of toxic cosmopop canvases, weirdo worlds that seem less ‘abstract’ (as they’re described in the press release), more literal realizations of a demented universe that has imploded inside a pyschedelically-charged brain. 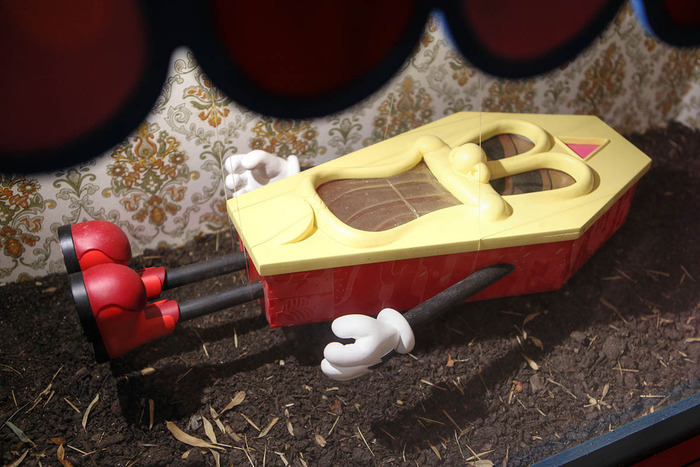 Downstairs, the coffin motif Sickboy is known for continues in 3D, as an installation, a kind of comic underworld that recalls a 50s fairground – with levitating characters, smiling hearts and arrows – and an Alice-in-Wonderlandesque hole, twinkling with lights that seem to lead to a secret chamber. Tempted to climb inside, the security promptly remarks – “there’s nothing in there”.

Sickboy comes from the ‘90s wave of prolific graffiti writers turned artists from the UK’s alt-culture capital Bristol (he even appears in Banksy’s film Exit Through the Gift Shop). A painter who dabbles in many media (except stencils) Sickboy is an influential subculture creator: he was reportedly the first artist to make his tag a logo, an act which made an important alignment between graffiti and other design practices. Though his significance perhaps resonates more with those inside the culture, the artist’s logo-tag can now fetch up to £50,000 in the commercial market. In the mid 2000’s the artist relocated to London, where he set about painting the now saturated streets of the East End. 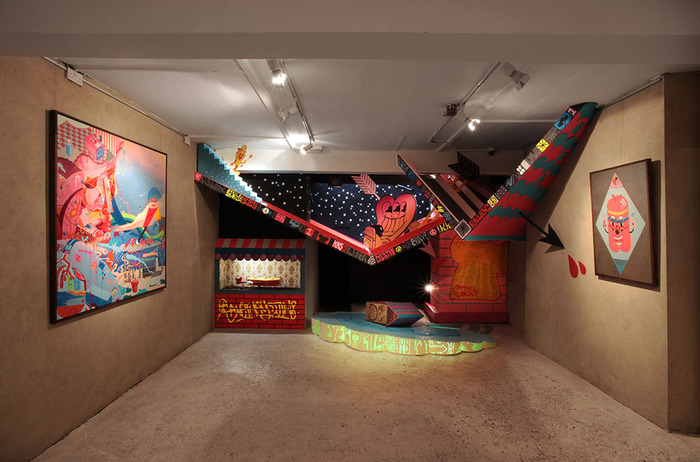 In the lead up to his big gig at Lazarides, Sickboy buried five of his coffin treasure chests around London, then announced their locations with an aerial map for the freaks and fans to go and dig up. The PR stunt draws a faint parallel with the work of his Bristolian peer Banksy – though their aesthetics are wildly removed from one another – it’s not only about putting art on the street, it’s about infiltrating the public, getting inside the streets, as it were. One of the coffins is also on display on the ground floor, packed with the kind of merchandise that is synonymous with graffiti – sticker packs, patches and prints. Sickboy’s irreverant attitude symbolised in this maudlin consumer treasure hunt – the coffin filled with its very ephemeral contents – makes him a very British artist. You leave the show uplifed by its pervasive sense of irony at the futility of it all. 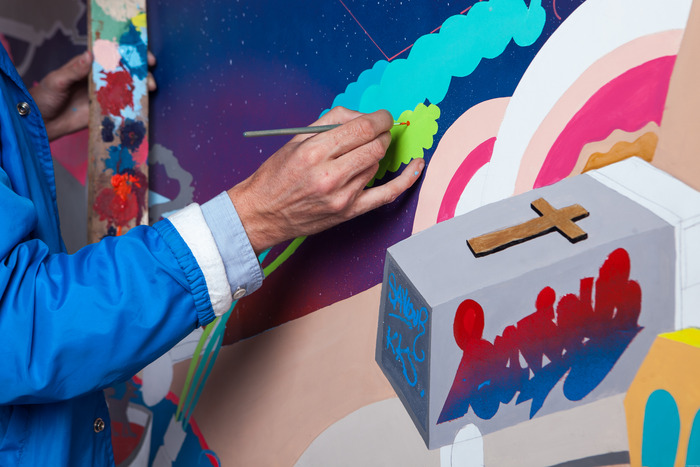 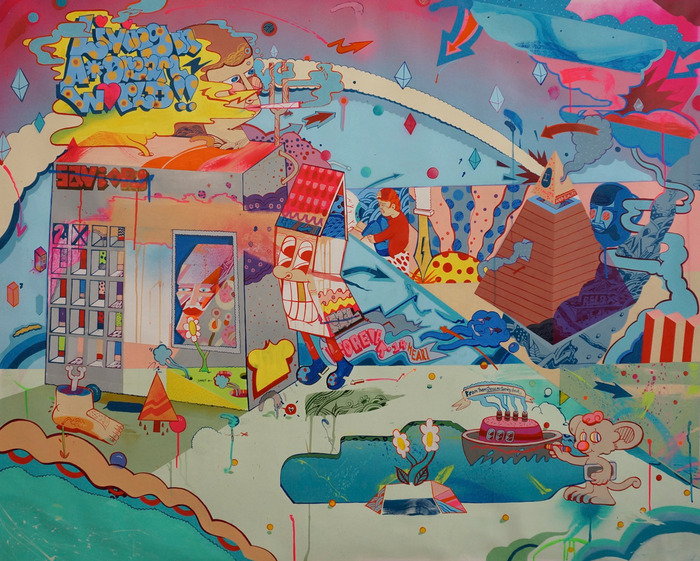 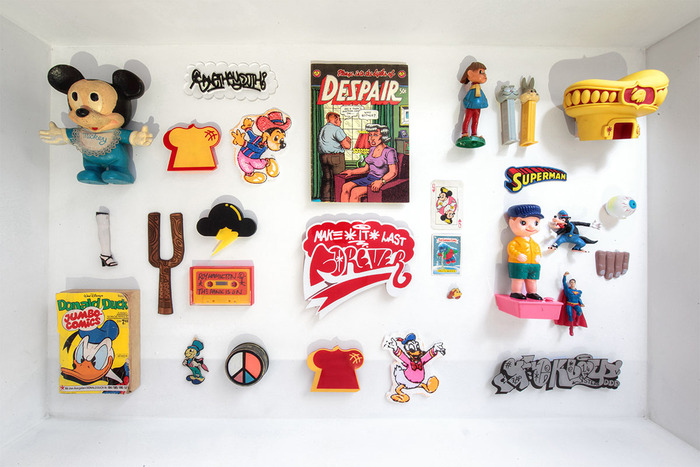 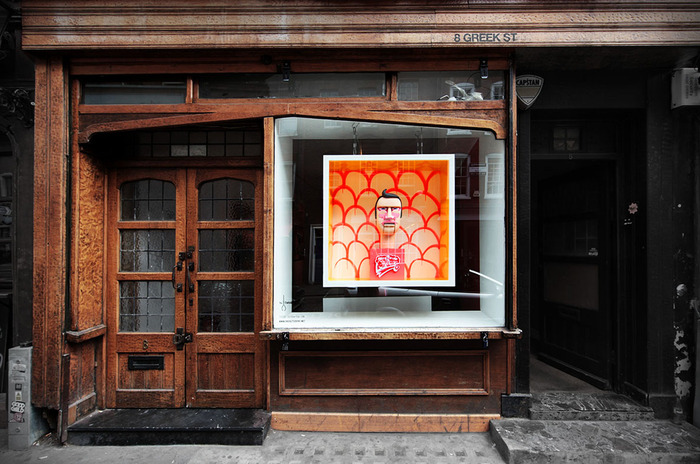 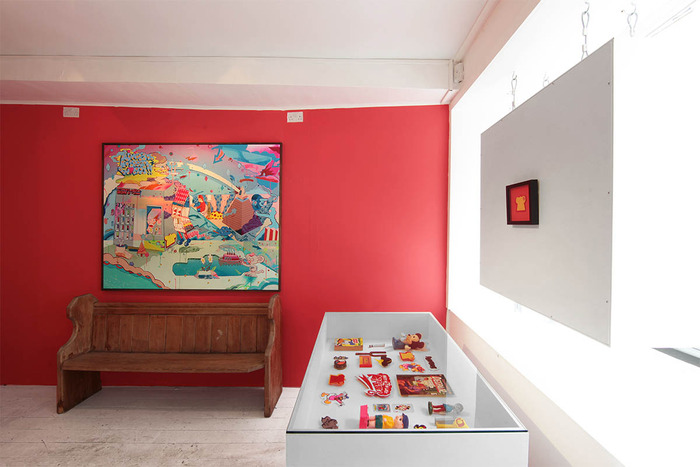 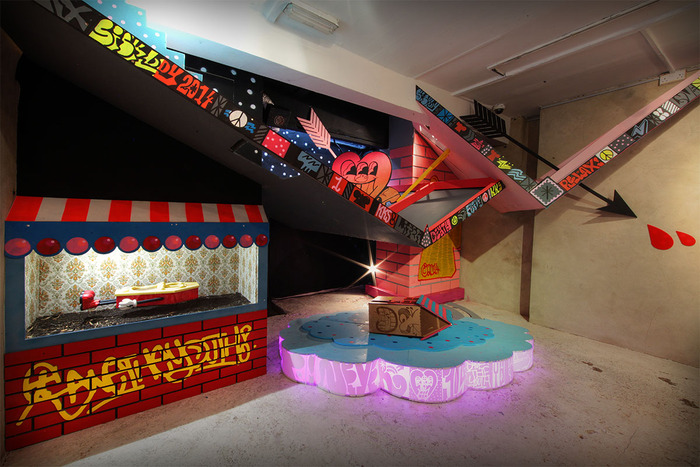 (All Images: SICKBOY; Courtesy of the artist and The Outsiders)