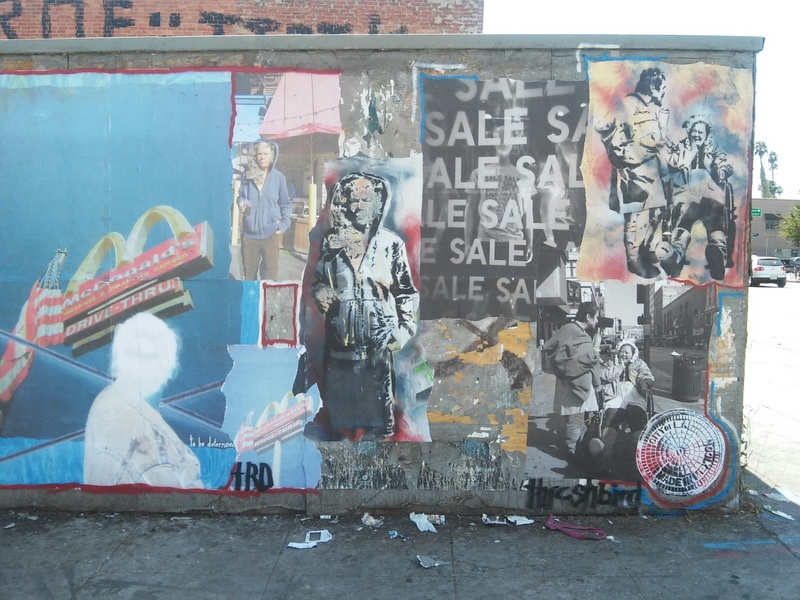 The corner of Hollywood and St. Andrews Place, which lies in the environs that inspired Charles Bukowski and retains vestiges of the boozy, broken-pavement working class milieu the poet embraced, isn’t popular with tourists. Not like the storied intersection at Vine Street is, a mile or so west on the boulevard. But there’s a longstanding garbage-heaped lot here bounded by an expanse of plywood partitions, which has long been popular with street artists, and it’s now slated for a hotel project.

Swept up in a welter of commercial construction along this eastern stretch of Hollywood Boulevard which developers aim to remake into a vision of old Hollywood, one that gleams as when movie mogul Louis B. Meyer was headquartered here, what is arguably the most popular street art wall in Los Angeles faces the end of its days.

When Los Angeles Neighborhood Council member Christian Beck gets up in the morning he moves to his bedroom window perched a floor above a liquor shop (one favored by Bukowski) and looks out at the length of wall bracing the empty lot with the expectancy of any visitor to a world class museum, as on any given day LA's subculture of street artists and graffiti writers have added something new. “Some of it is spectacular and I can’t think of another wall like it,” says Beck who has an encyclopedic knowledge of Los Angeles city streets from years as a limo driver. “This went up on June 6, D-Day, it’s just amazing,” he adds, pointing out a piece easily missed, a sketch-book sized collage of World War II imagery, mounted under Plexiglass unsigned and overwhelmed by the monolithic wall.

Clued in as he is in being an advocate for the neighbourhood, Beck explains there may be some time before work begins on the hotel – it’s yet to pass before the LA city council Planning and Land Use Management Committee – but he’s resigned that the project will permanently ruin his view. In the meantime, he has been photographically documenting each new artwork. He watches too as the wall is regularly rolled-out battleship gray, painted over by the Hollywood Beautification Team, a platoon of low-level offenders – Metro hoppers, convicted vandals – working off fines. And this municipal policy proves folly, as a continually restored fresh canvas draws street artists in. But walls on derelict real estate throughout Hollywood get the beautification treatment, and Beck can’t single out what else could attract artists. 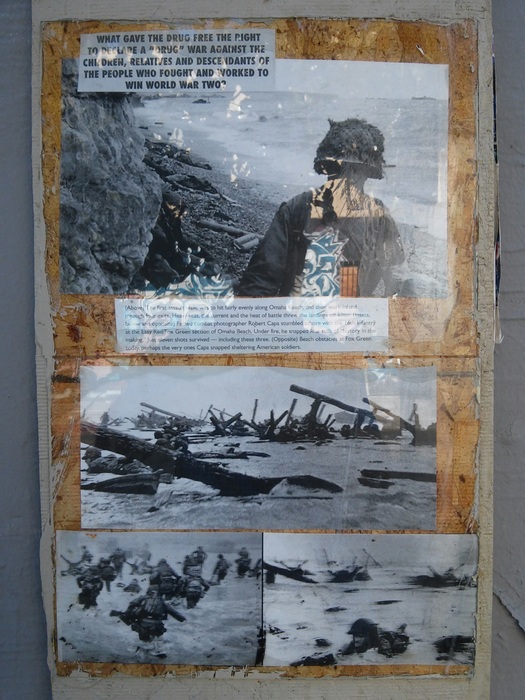 The piece currently up presents the spectacle of illegal street art evolving into extravagance. Some fifty feet of an accretion of stencils, photo art, wheat paste ups and pops of color applied with paint. Taken in sections it appears to be the work of different hands, but from afar, the whole composition is cohesive, of a fabric, and paradoxically mimics the streetscape it faces, the gritty boulevard of shouted multilingual arguments, resplendent with orange-tipped syringes, the glittering glass of emptied vodka bottles. While Banksy’s graphic gags are ubiquitous on the street, this artist has made what is tired new again, by eschewing obvious visual jokes and presenting a sincere rehashing of modernist sensibilities. It is signed Thrashbird.

“I hit the wall because it’s always been an artist wall, it’s established – and the cops leave you alone there,” says Thrashbird, whom, following a flurry of texts and emails, I’ve met up with on a sidewalk in North East LA. “People look at that wall. Like you looked at it and found me.”

At first glance evoking a tall, lankier Keanu Reeves, Thrashbird, 32, speaks in rushed clips about his work, punctuating thoughts with punches to my shoulder. “It’s called American Gluttony and I painted it on the fourth of July,” he says of the Hollywood Boulevard work, explaining his intent was to make the work noticeable to drivers in traffic. “It’s my largest piece, I haven’t done something like this un-commissioned.” A similarly scaled work of his on Lincoln Boulevard in Santa Monica was sponsored (that was legal, and paint was supplied by a non-profit group), “But I’m not opposed to dropping a little stencil on the sidewalk – on your computer screen it’s as big as a mural.”

Originally from San Diego and a former pro-snowboarder, he came to Holywood to act and model. In 2010 he first applied paint to a wall starting an infatuation with street art making, inspired, like so many, by Banksy, as well as the work of Robert Mapplethorpe and John Baldessari. When I offer he’s made a Rauschenberg, he enthusiastically says, “I’ve heard that, but don’t know him – my knowledge of art history isn’t that healthy.” 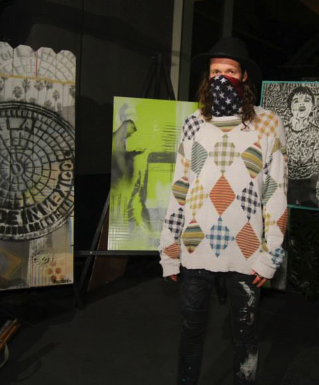 Thrashbird’s recent output – two solo gallery shows upcoming and ambitious studio projects in the works – correlates with overcoming a substance addiction. Which one? “You name it. Put it in front of me and I’d do it. And wouldn’t stop.” After a relative sponsored a successful bout of rehab, he has transformed, and Thrashbird now voices a clarity of vision, speaking of a purpose that propels his work and has changed his connection to the world. “I stopped putting pressure on myself to succeed and just did the work. And things – good things – are happening”

(All images: Courtesy of the author)