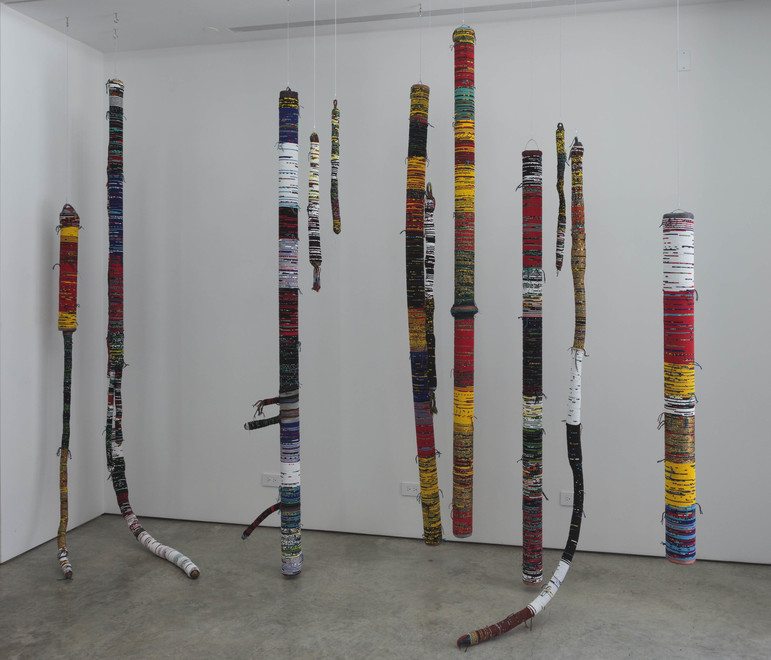 Driscoll Babcock, which moved to Chelsea two years ago, is something like a stately townhouse in a row of beige suburban mansions. The gallery bills itself as the oldest in New York, and casts itself in a grand tradition of the city’s academic art. You don’t find sly, discreet conceptual gestures, nor massive, high-production-value installations. Instead, the gallery seems to look for untrendy, well-crafted works in a certain American tradition—their roster includes works from the estates of Thomas Eakins, Stuart Davis, and Andrew Wyeth. With their summer exhibition, In Between Days, they are turning to younger generations of artists who bring a strong emphasis on craft to their individual projects.

The visitor is greeted in the lobby by a series of totemic objects from Leonardo Benzant: Paraphernalia of the Urban Shaman M:5 (2012-2014). The “urban shaman” is the artist himself, who traces an artistic African diaspora through his Dominican background. A cluster of poles, mostly about the height of an adult, dangle from the ceiling. Together, they suggest a curtain or forest wrapped in bright beads, frayed thread at times poking through. Most of the poles look like rainsticks or staffs, but some are curved into more vegetable-like nubs.

One wall of the main gallery is dominated by Phosphenes—Phoenix for the American Republic (2012) by Michael Maxwell, a monumental painting and sculpture. The work draws upon indigenous American traditions of the southwest, using turquoise, a silver and tan palette, strong diagonals, and torn strips of cloth suggesting feathers. The cloth strips seem to burst through the canvas at times, forming an added layer to and disrupting the plane of the work.

Across from it are Luke Whitlach’s radially symmetrical dye and acrylic paintings. The paintings are notable for the multiple simultaneous methods of paint application: mechanically-straight lines, impasto, feathering, and bleeds. The dye process allows the colors to run from the center out or the borders inward. Some canvases, like Mike Cedar Stakeout (2013) are bifurcated by paint lines. The works might be reminiscent of a petri dish, or a geologic formation, or a planet formation: indeed, the intricately constructed abstractions make scale seem irrelevant. 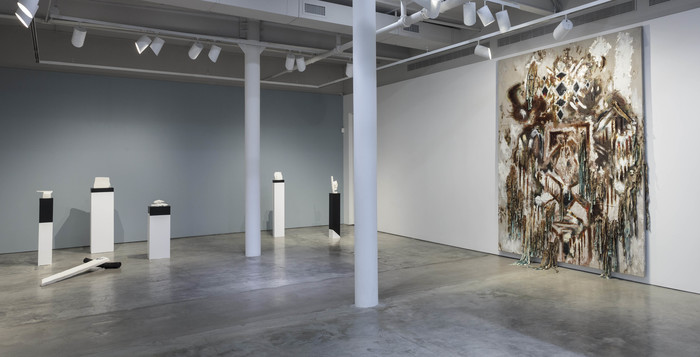 Kara Rooney’s starkly black-and-white sculptures dominate a gray-tinged wall. Five pedestals, black-topped and white-columned, support football-sized white plaster and ceramic casts. Buried into works, seemingly during the casting process, are small pieces of paper like the digital photograph fragment in On Moving Father Away from Speech, or Hindsight is Never Twenty/Twenty, No 1 (2014). The casts are of immaterial or neglected objects. One seems to be of bubble wrap; others of shards of wood and stacks of paper. The sculptures suggest an attempt to hold onto the ephemeral, like odd monuments to the ignored.

Four of Jennifer Packer’s wild, colorful paintings take up the opposite wall. She applies paint thinly but in strong scrapes, not unlike Leon Golub’s large paintings. Two paintings of calla lilies turn the flowers into mysterious, obscure beings, not the theatrical flora of so many photographs. The purple lilies seem to emerge from the purple backdrop, into which their vase disappears, too. In the central painting, For James (III) (2013), a man with marble-like yellow eyes stares up at the viewer from the surface he lies on. The space is ambiguous; the whole scene is disorientingly inverted. Paint is the primary thing here: the classic subjects for a painting study of portraits and still lifes given a new, painterly space to inhabit. 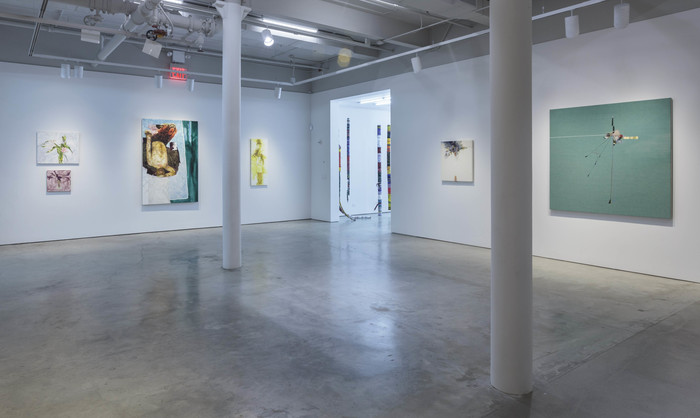 The exhibition puts forth no Grand Theory of American art, nor do the artists belong to any single stylistic, political, or theoretical camp. But we need not expect this in a summer show, least of all one calling itself In Between Days. Think of it more as a studio visit for a different swath of American art than that presented in the city’s big biennials and hangar-sized galleries. The artists here keep their heads down, focusing on craft and pushing away from trends, even if that means resting for a moment in an "in between" space.