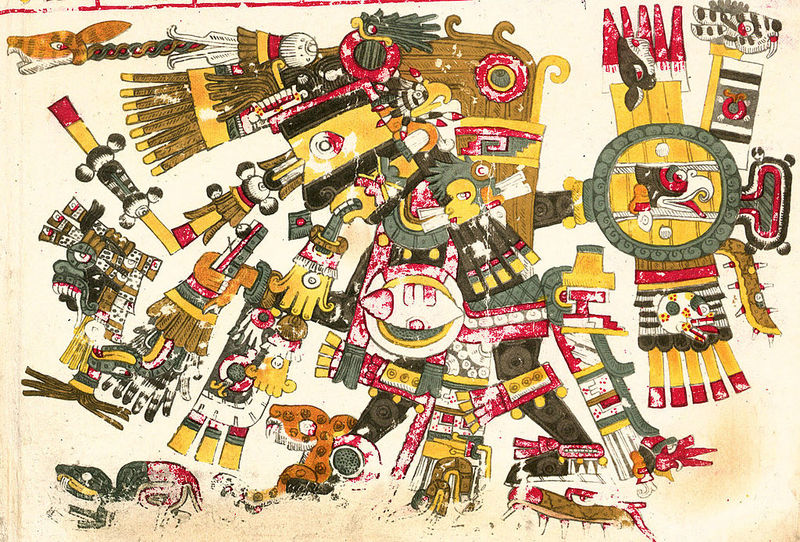 Surely black, but so lively one cannot catch its true hue. Volcanic glass cooled too fast to crystalize, scientists never can quite call it a mineral or capture its color too closely. Depending on the angle of shimmer however, approximates exist.

Named by Pliny the Elder as Obsius Lapsis, after a dubious claim that it was discovered by a Greek of that name, the gem gained its "d" from a printer’s error. The Aztecs called obsidian itzli, a force that found form in the macahuitl.

A wood sword brandished by Aztec warriors, but unfortunately not well enough. Set with prismatic blades laid into a finely carved wooden shaft, according to Bernal Díaz del Castillo, the macahuitl could chop the head off a horse with a single blow. Many drawings exists, but the only surviving macahuitl burned in a fire in Spain in 1884, a last obliterating kiss from the conquistadors to an annihilated people.

Wielded like a club but sharp, and when pulled back, serrated. Handy for capturing sacrificial victims, the blunt side could knock them unconscious while the blade could do the rest. The highest level of Aztec heaven was reserved for warriors and sacrifices, either side of the black stone sword.

Drawing of the last macuahuitl destroyed during the fire of the Real Armería of Madrid in 1884.

Some scholars think obsidian kept Americans from learning advanced metallurgy, but it was not this but surprise, bad timing, and disease that destroyed the Aztecs, their obsidian blades gleaming even in the moonlight as they marched in loose formation, animal skinned, and armed with a cruelty only matched by the Spaniards.

Though often black in your hand, if shaved right, the slivers of obsidian shine clear. The stone is too lively to catch a perfect color, but in the low spectrum, a few shades from pure black exists a flicker of its fire, far enough to glow with the softening impurities of other colors.

Obsidian is the color of soothsayers. The Aztecs peered into it as a portal to other worlds, sacred caves, reading prophesy through its starless gleam with darkling perfection. Obsidian is the smoking mirror, the English name and symbol of the fearsome Tezcatlipoca, god of the night sky, the north, the earth, enmity, dark winds, hurricanes, discord, divination, temptation, beauty, war, strife, and most fully, the divine embodiment of obsidian. At the founding of the world, he traded his right foot for an obsidian mirror. The deity of rulers and sorcerers, the personification of change through conflict, he is the lord of the night and its creatures—above all, the jaguar, capable of crossing between the earthly realm and the underworld. 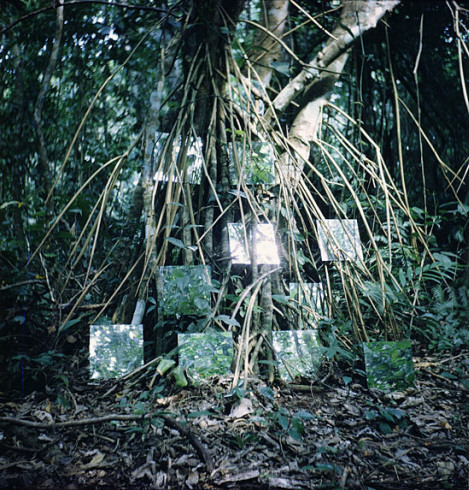 Though wandering far from the Aztec dominion in the Yucatan, Robert Smithson came to the Yucatan in 1969 trailing Heizer’s dad and John Lloyd Stephens, both chasers of myths and monuments. In his rearview appeared Tezcatlipoca.

“All those guide books are of no use,” said the god. “You must travel at random, like the first Mayans; you risk getting lost in the thickets, but that is the only way to make art.”

Smithson placed mirrors around the peninsula, near Mayan ruins, in the jungle, and beside the sea—“mirror-travel” between his and the ancient world. He took photographs of his “Mirror Displacements,” and carrying their glass back with him to New York, documented his visions in Artforum magazine.

"It was in the black mirror of anarchism that surrealism first recognised itself," says Andre Breton.

Art is a poor reflection of life, its colors shine best only momentarily, the objects as lively as skeletons. The color here is not obsidian, a printer’s blunder, but it perhaps has beauty too. There is however no future to be found in plumbing its depths.

The reflected light has been erased. Remembrances are but numbers on a map, vacant memories constellating the intangible terrains in deleted vicinities. It is the dimension of absence that remains to be found. The expunged color that remains to be seen. The fictive voice of the totems have exhausted their arguments. Yucatan is elsewhere.

(Image on top: Tezcatlipoca from the Codex Borgia.)

Can You Understand Graffiti without Breaking the Law?
10/7/14
COMMENTS (0)
ArtSlant has shutdown. The website is currently running in a view-only mode to allow archiving of the content.