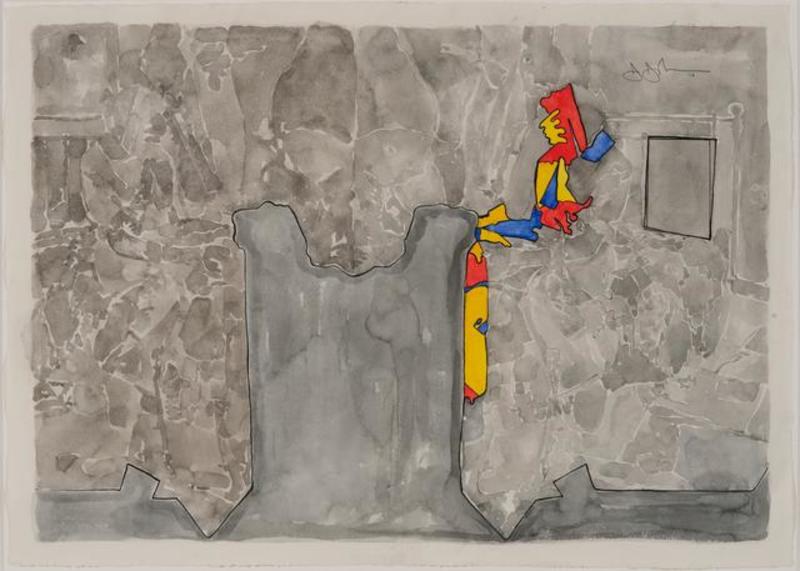 Fade Away and Radiate

Keep everything on the surface, even with the knowledge that the surface fades and can’t be held together forever—take advantage before the expiration date appears in the nearing distance.

During this test you will be shown a series of inkblot images. Look at each inkblot for a moment then select the appropriate response(s). At the end of the test your responses will be analyzed and scored, and a summary of the test evaluation will be presented to you.

The Museum of Modern Art is currently showing Jasper Johns’ most recent body of work, paintings and works on paper predominantly in grays and blacks, all riffing on the same image: a “portrait” of the late painter Lucian Freud sitting with one leg tucked under him on an old-fashioned iron bed, clutching his head in his hand, taken by Francis Bacon’s friend Richard Deacon. In June 2012, Johns encountered the photograph reproduced in a Christie’s auction catalog. Inspired not only by the photographic image, but also by the physical qualities of the object itself, Johns took this motif through a succession of cross-medium permutations.

Johns has often cloaked the personal meaning of his works in a protective coating of irony, referencing High Art through the vehicle of the ordinary. From the 1950s through the mid-eighties, Johns eschewed pinning specific meanings to his cryptic images, through references to American poetry, Egyptian steles, decorative patterning, flags, alphabets, targets, and numbers—what he called “things the mind already knows.” 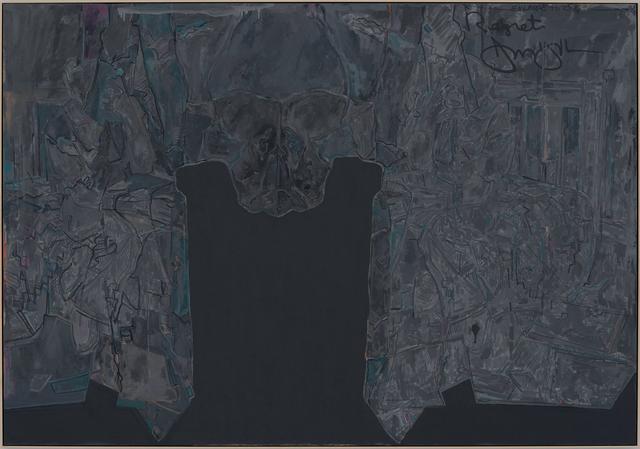 In the past few years, Johns seems to have taken stock, beginning with his late-nineties Catenary paintings, and returned to the simplicity and clarity that was the strength and hallmark of his best works. In these current paintings he plays with mirror images of the photograph of Freud. “I don’t know why I decided to double it,” Johns said of these pictures. “It’s curious because there’s one with it doubled one on top of the other—a completely different use of space. I found it interesting—the forms, the negative space where he’d torn the picture.” Where the twin images adjoin, they form a skull, a reference to mortality that has appeared often in Johns’ works, as well as forming a sort of Rorschach Test drawing reminiscent of Andy Warhol’s Rorschach paintings. In most of the works Johns has silk-screened “Regrets, Jasper Johns” (a phrase he had previously made into a rubber stamp to answer correspondence in an efficient way). The simple phrase carries a hint of Johns’ Southern roots. One imagines Truman Capote declining an invitation to a social engagement—“Sorry darling, regrets”—or Cole Porter’s Miss Otis Regrets.

Art asks: How do we know anything about other people? The tension between an artist's public and private roles is a constant preoccupation to the audience. The artist is challenged to dwell within this conundrum and elaborate most fully the questions of how to articulate the private in a public forum, and whether the private life will be able to find an image for itself that can stand up in this forum. Both the artist and the painting struggle against the urge to reveal themselves up in their entirety; we see an artist struggling to communicate with sincerity, yet also with studied calculation: “Myths develop. I think people make things up. There’s nothing I want to set straight about the record.”

Johns has worked out his composition and imagery through studies, like Regrets (2013), a charcoal, watercolor, and pastel work on textured paper. Here the mixed media functions in relationship to paint the way an understudy does to an actor—allowing Johns to imagine the possibilities and incident of paint, a dress rehearsal for the ultimate pictures. We see the results in Regrets in oil (also 2013), with Johns using his previous signature crosshatching to replace the paper’s texture, and heightening the effect of color in a portion of the figure of Freud. In the end, through the distancing effects of Johns’ process, he allows himself to be “painted out of the picture”—in the way that he did with his targets and flags. Johns allows the paintings to once again stand apart from their creator, with an eye to posterity, letting the viewer into his pictorial space, not his personal one. In some ways, these might be some of Johns’ greatest works—and, at eighty-four, Johns is in that rarified club of octogenarian artists like Picasso and Matisse, whose late works were both a “fuck you” and a gift to the history of painting.

Under the Radar: Super Pop Boy | Leonard Zinovyev | Taco Eisma
1/10/19
COMMENTS (1)
The photograph of Freud is by John Deakin not Richard Deacon
Comment by: Andy Swani on Tuesday 06/03/14 at 8:49 AM
ArtSlant has shutdown. The website is currently running in a view-only mode to allow archiving of the content.