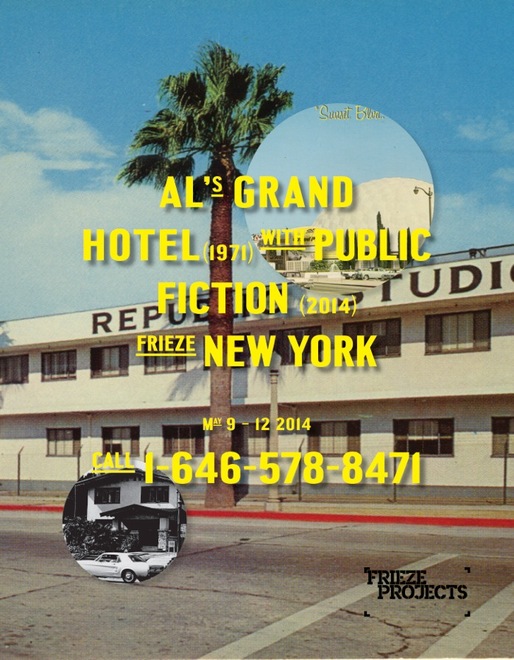 A lucky few attendees of this year’s Frieze New York Art Fair will be spending the night on Randall’s Island as a part of Frieze Projects’ re-staging of Al’s Grand Hotel, a work from 1971 in which the LA artist Allen Ruppersberg ran a fully functioning hotel out of a converted home on the Sunset Strip. This is the first, and maybe only time for the art fair to keep overnight guests, and in order to do so they have arranged for a dedicated bathroom and shower, extra security, and an ambulance on standby. Guests will be given a dinner box and a bottle of wine, and politely disallowed from leaving the confines of the hotel’s three-booth footprint after the fair closes. For entertainment, a curated program of old Hollywood films and art videos that have a relationship to hotels will play on televisions in the rooms.

Reservations were fully booked long ago at $350 a piece, and all told between eight and sixteen people will be guests of the hotel. While most of us will be left to wonder what it might be like to be locked, Old Boy style, in a staged room inside a 250,000 square foot tent full of high-ticket contemporary art on a island populated by two psychiatric institutions and a homeless shelter, we won’t be missing out on the true substance of the piece. It’s all about the things that happen before the guests tuck in for the night. 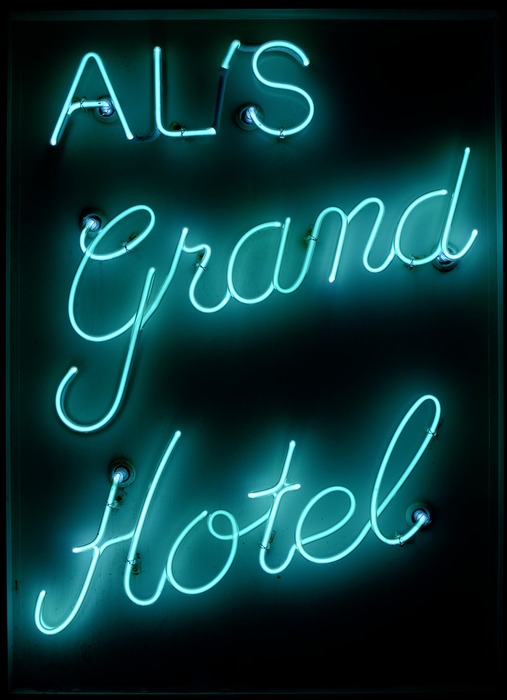 Frieze curator Cecilia Alemani explained her decision to bring back Ruppersberg’s project this way: “I have been interested in the history of artist-run spaces and alternative spaces in America, in particular for their role as gathering and meeting places for the art community. Al's Grand Hotel was exactly that: a magical space that functioned both as a hotel and a place where the artists community gathered.” Artists in 1970s LA needed a place to be—to encounter performances, to drink beer and talk, and Allen Ruppersberg, in a move that preceded the “relational aesthetic” gallery-based exhibitions of Liam Gillick and Rirkrit Tiravinija, addressed that need, first with Al’s Cafe in 1969 and then two year later with Al’s Grand Hotel.

Likewise, visitors to Frieze will be invited to take respite from walking the endless corridors that link the 192 galleries there by stepping into a tribute to Ruppersberg’s hotel, a lobby and two rooms, where beer and wine will be served everyday from 3 to 7 pm. Lauren Mackler of Public Fiction, curator and key collaborator in re-imagining the hotel with Ruppersberg for the new rendition, will be present as the desk clerk—assuming Ruppersberg’s original role from 1971—and available to engage in dialogue about the work. Visitors might share amusing stories about things that have happened to them in hotels, perhaps triggered by the kitschy decor of the “Jesus Room” and the “Bridal Suite,” or by the free newspaper containing reproductions of advertising leaflets and other archival material from the original. They might also be prompted to discuss their own experiences with artist-run spaces that so often exist in a similar grey zone of functionality. 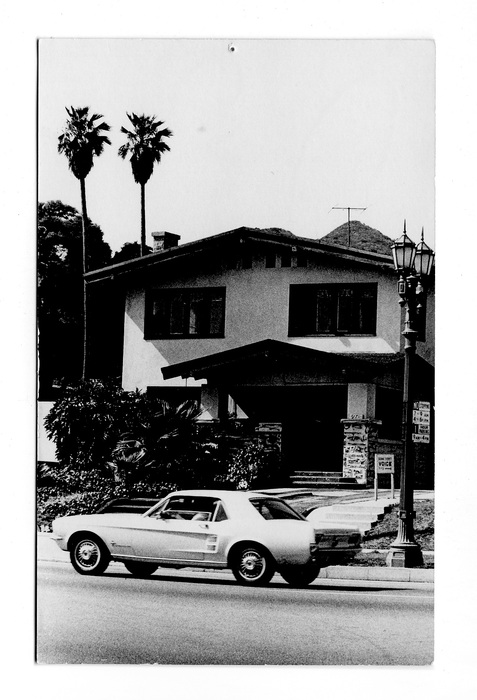 Some important artist communities have sprung up because artists started hosting shows in converted garages or opened up bars or bookshops where artists could meet, mingle, and exchange ideas. Hosting Al’s Grand Hotel in a glamorous art fair adds a new twist to the history of such spaces. It validates their significance in a way only mainstream events can, and perhaps it will infuse the art fair with a renewed dose of anti-establishment ideals. We’ll see.