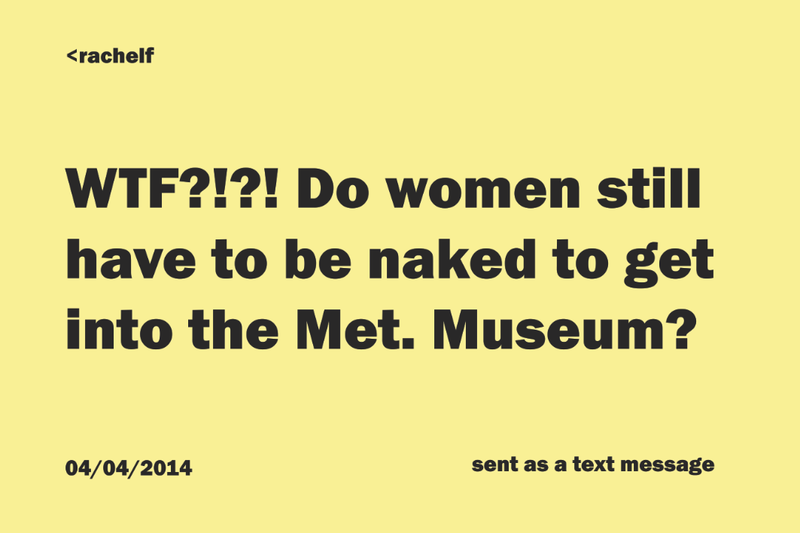 The Rounds of a Rumor: #womenMoMA2015

So you may have heard a little story about MoMA’s plans for 2015… and, well, they’re not true. Yes our story about MoMA showing only women artists for the year, in temporary exhibitions and in the permanent collection, was an April Fool’s hoax, published alongside stories about Putin’s new vocation as a painter, Gagosian opening a new location on St. Bart’s and Jemima Kirke quitting the HBO series Girls in order to focus on art. (Read the original post here.)

Now you might be wondering, why are we talking about an old April Fool’s joke on May 1? Our joke struck a chord with lots of readers—with mixed reactions. Some were supportive, viewing it as an institutional critique that shed light on issues of representation and equity in a major museum. For others, the joke stung a bit too much.

The post was called “disturbing,” “poor taste,” “unconscionable,” and “a ‘slap on the ass’ to women artists everywhere from the good ole boy network.” This last one I find especially amusing because lately we’ve been accused of the exact opposite: a recent email from a male artist and self-proclaimed feminist noted that our 2013 ArtSlant Prize Winners all happened to be female and concluded with dismay that ArtSlant “looks like a women’s site, now.” It certainly goes to show that people are always counting, one way or the other.

@guerrillagirls @ArtSlant Oh no!!! April Fools!!! My day is ruined!

When we first posted our April Fool’s joke, we certainly expected to get a rise out of people. Most of the responses we saw on Twitter and Facebook followed a pattern: elation and excitement, followed by great disappointment. One of our Twitter followers said she was “heartbroken” when she learned it was a joke. Interestingly, it seemed there was consensus: that a year devoted to exhibiting the work of only women artists at a major museum would be a great idea.

Most surprisingly, though, is the number of people who took the article at face value. It started getting reported as fact elsewhere on the web, and one of our editors overheard a group of people at a dinner party in New York legitimately debating how the collection would be switched over. (Apparently many people have a lot more faith in MoMA than we do.) And just a few days ago, the rumor trickled down to a small mention in a Village Voice feature about Judy Chicago, who was quoted, "MOMA announced that they're devoting 2015 to women artists. That was a '70s strategy; all we want is 50 percent!"

To us, these responses suggest that the topic bears more scrutiny. We reached out to MoMA for comment on the article, and a press representative replied, saying that they “enjoyed the April Fool’s joke, which got a lot of traction.” Kathe Kollwitz of the Guerrilla Girls enthused, “Loved the piece!!!!!!!  Perfectly written!!!! We saw tweets from people who were ‘heartbroken’ when they realized it was a hoax. Great job!!!! The Guerrilla Girls specialize in finding new ways to present issues, and obviously so do you!”

@ArtSlant @guerillagirls overcome with sadness when i realized this was an april fool's joke...diminutive frida kahlos FTW

Firstly, I want to assure everyone out there that the post was in no way meant to offend or to make light of the efforts of women artists. On the contrary, it was meant to point out the continuing state of inequality in our institutions. I concede, however, that if one were accustomed to being on the short end of the “good ole boy network” the article could be interpreted in a negative light, though that was absolutely not our intention. ArtSlant is about as far from the “good ole boy network” as you can get: ArtSlant was founded by women in 2006/7 and is built on the ideas of community participation and inclusiveness; our CEO and CTO are both women, who work in the field of web and software development, a field almost entirely dominated by men; and our staff of editors and writers employs mostly women—but this is more likely representative of the overall makeup of young arts writers out there today, as evidenced by the numbers of students enrolled in studio art and art history programs, where women usually outnumber men three to one (SAIC for instance is 70% female, RISD is 67%, MICA is 71%, the Courtauld Institute a whopping 80%).

We wouldn’t be the first to point out the inequity involved when two thirds of our young artists are women, yet the statistic flips when it comes to gallery representation, and gets worse when you look at museum collections. Micol Hebron’s collaborative poster project, the Gallery Tally, which has been widely discussed in the press recently and exhibited at ForYourArt in Los Angeles, makes art from the statistics of gallery rosters around the world. And here we’re only talking about the gender gap—the statistics get more depressing when discussing artists of color, particularly women artists of color. Case in point: Eunsong Kim and Maya Isabella Mackrandilal’s scathing report from the Whitney Biennial confronts the diversity espoused by the Biennial’s curators with the actual, dismal numbers. 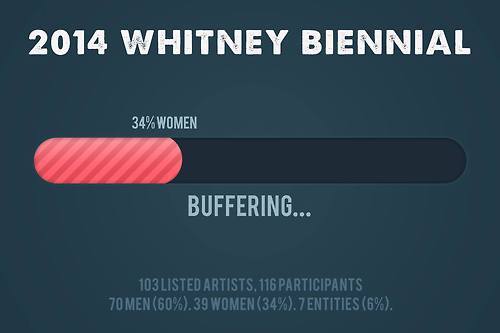 In response to our questions regarding MoMA’s track record of exhibiting women artists, the press representative wrote, “MoMA continues to mount major solo exhibitions by women artists--Sanja Ivekovic, Alina Szapocznikow, Isa Genzken, and now Lygia Clark—in addition to featuring their work in the collection galleries [and] in our film programming.” We were also supplied with a factsheet and information about the 2010 exhibition and symposium series Modern Women and the Modern Women Fund, established in 2005, which sets aside a sizeable fund to purchase works by women artists for the museum’s collection. One can’t disparage MoMA’s efforts to mount these shows and to fund the collection of works of art by women; this is important. Yet, we contend, while MoMA is certainly showing its share of women artists, it’s still not quite a fair share. The current line-up adequately proves my point for me: Gauguin, Sigmar Polke, Jasper Johns, Frank Lloyd Wright, Edgardo Antonio Vigo, and (fittingly) Robert Heinecken. The only solo presentation by a female artist is Emily Jacir’s Ramallah/New York now on view in the film theater entrance and ticketing desk, on the first floor. (Granted, Lygia Clark’s solo exhibition is due to open in May.) And in all the current exhibitions featuring multiple artists the male representation outweighs female, except in the Designing Modern Women exhibition (read our review here).

As the original post was written in the spirit of the Guerrilla Girls (and likely subconsciously sparked by this quote, “To make up for what's happened so far in art history, every show should be 99% women and artists of color, but only for the next 400 years,” from Confessions of the Guerrilla Girls) we reached out to the gorilla-masked activists for comment. The response, we think, is worth re-printing in full:

When we started back in 1985, museum curators and art dealers insisted that work by women and people of color just didn't rise to the quality of art by white men. No one would say that in public today. Now every survey show needs at least a couple women and artists of color to avoid shit from the press.

But if you look at the statistics of solo shows and collections, not much has really changed. In 2012 the MoMA collection on view in the galleries was less than 16 per percent women and the Whitney about the same. The National Gallery in DC and the Hirschorn were even worse!

Art museums are run by billionaire art collectors who sit on their Boards, the 1% of the 1%, and their collecting is fueled by auctions. If you compare the highest price paid for a contemporary work by a woman ($10 million for a Louise Bourgeois) to a white guy ($143 million for a Francis Bacon), that's 7%! And museums all seem to want the same cookie cutter collections of art-that-costs-the-most. They treat art like an Olympics with a few heroic winners and all the rest losers. What a lousy way to let our history be told!

We love art and artists but the art market really sucks, more now than before. It's full of poseurs, speculators and out-right criminals. According to Interpol and the FBI, art, totally unregulated, is the 4th largest black market in the world, after guns, drugs and diamonds. There's a least one Museum trustee who went to jail for price-fixing in the auction houses and a couple who are lucky not to be in the slammer.

We would LOVE to see the Museum of Modern Art devote a year to showing women artists. Apparently a lot of other people agree. What will it take?

Their response begs the question: why are we still stuck in a catch-22 situation, where in order to get into a museum collection you need to have better art market results, but the best way to increase an artist’s market value is to be represented in more museum shows? It’s a resounding echo chamber. Even epically famous women artists are not immune: in the aforementioned Village Voice article, Judy Chicago herself says, "Not one of my works is in a major museum collection, other than the Brooklyn Museum or LACMA. Not MOMA, the Art Institute of Chicago, the Met, the Whitney..." If any artist is considered canonical, wouldn’t it be Judy fucking Chicago? On the other hand, one of the artists we talked to, Lynn Hershman Leeson, whose recent film !Women Art Revolution chronicles the feminist art movement, told us that even though her works have been collected by major museums like the Tate, MoMA, and the Whitworth, a prominent international gallery told her "they would take my estate after I'm dead but won't show me till then." WTF! It’s a shameful situation, which affects even established artists. 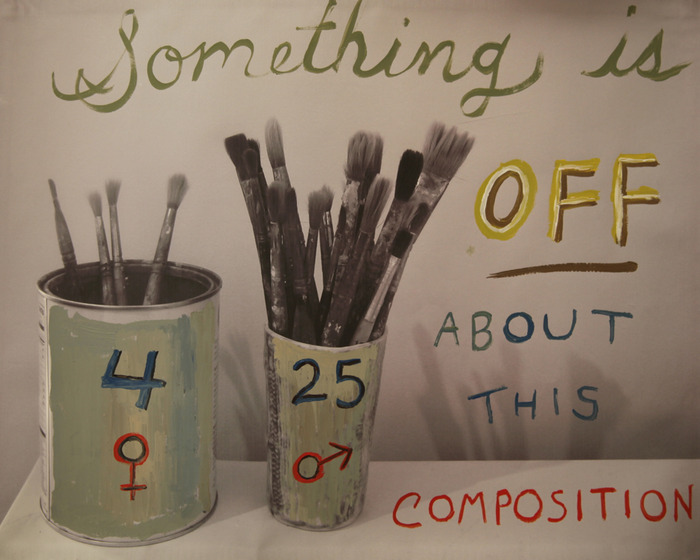 Clearly the situation affects all levels of the art establishment. Our April Fool’s joke was a little jab at the system, one that arose from wishful thinking on our part, but it’s morphed into a creative imagining of what a radical gesture could possibly look like from a major institution. So how about it? Tweet your suggestions for an all-female MoMA 2015 roster with the hashtag #womenMoMA2015. In the spirit of Xaviera Simmons’ Archive as Impetus, let’s use MoMA’s collection archive to find works that are currently not on view, or tweet works by artists not yet in the collection. Let’s see how far a little institutional critique can go!

(Image at top: Poster for the Metropolitan Museum (NYC) by Rachel Finkelstein, courtesy of gallerytally.tumblr.com.)

#NotYetDead: Beyond the Selfie
3/17/16
COMMENTS (2)
thank you Lily!
Comment by: Natalie Hegert on Monday 05/12/14 at 11:47 PM
truth should be heard
Natalie, Good job for writing this blog, truth should be heard!!! Lily Kostrzewa
Comment by: Lily Kostrzewa on Tuesday 05/06/14 at 5:13 PM
ArtSlant has shutdown. The website is currently running in a view-only mode to allow archiving of the content.