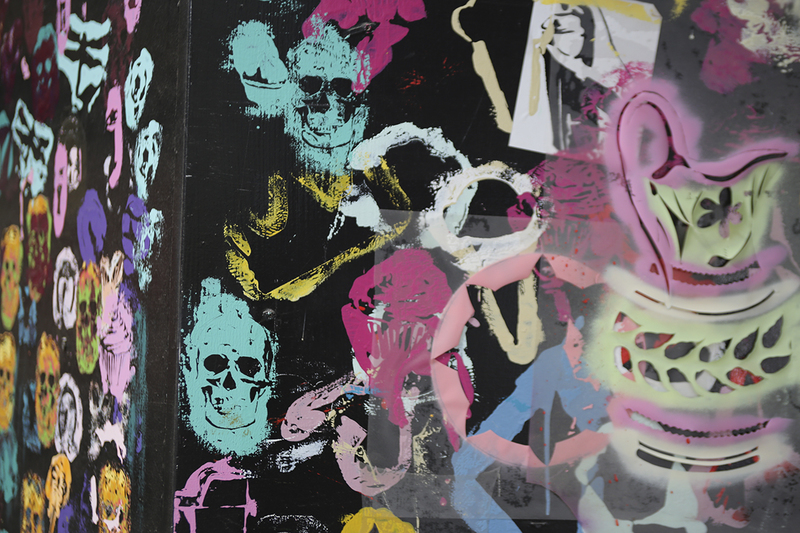 Casey Gray’s studio is in a warehouse overlooking the shipyards of San Francisco, CA. It was once a recording studio and remnants of those days still linger. Like the Jerry Garcia-inspired tracking room with its tie-dyed walls and black-light posters or the original album artwork hanging around the space. Basically, Casey’s studio is that of a visual artist’s dream: tall ceilings, loading gates, and the immortal presence of rock star lore.

Everything you see in Casey Gray’s paintings are done with spray paint, so the fact his studio is entirely ventilated is crucial to his practice. He even has his workstation directly next to the steel roll-up door, so the fumes of his aerosol cans breeze out into the open air of the bay. Floating into the weirdness of San Francisco. 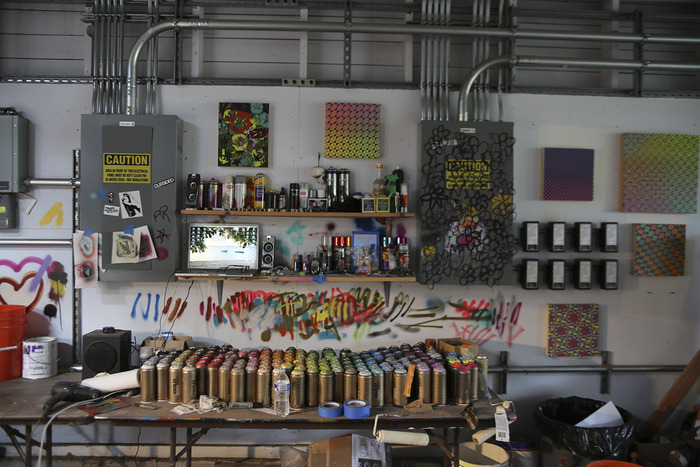 He found this dream studio a few years ago through a friend and has been there ever since. It was a fortuitous discovery too, since at the time Casey was an MFA student at the San Francisco Art Institute. The studios that the school provided were great for acrylic painters, but given Casey’s medium of spray paint they were not ideal. Anyone who has worked with spray paint knows it’s best to be outside or in a well-ventilated area in order to avoid the harmful fumes emitted from the delivery devices – the effects of which I will be investigating in a future article.

However, the building may soon be torn down, so Casey is making full use of it while he can. He’s working on at least a dozen new pieces at the same time – everything from still life scenes to bikinied butts to flowers to wavy bacon strips – and all of it done in spray paint. He’s prolific. At one point we turned to his flat file, which is filled to the brim with large works on paper, all of which were completed within the last couple of months. 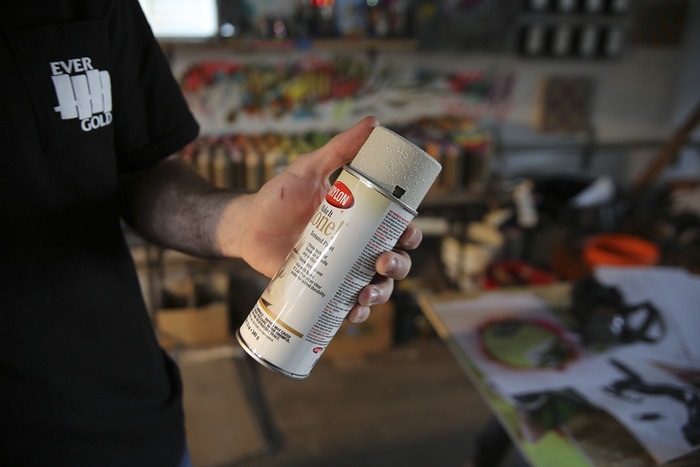 It’s like Casey is a magician, only instead of waving a wand he waves paint through the air. Why? Because when you look at one of his paintings you can easily think it was done with oil and brushes. And in fact, up until meeting him personally I thought it all was.

Casey is a true master of the spray paint medium in the same way that the artist El Mac is. They are both capable of doing things with a spray can that the manufacturers never anticipated and that are next to impossible to replicate. 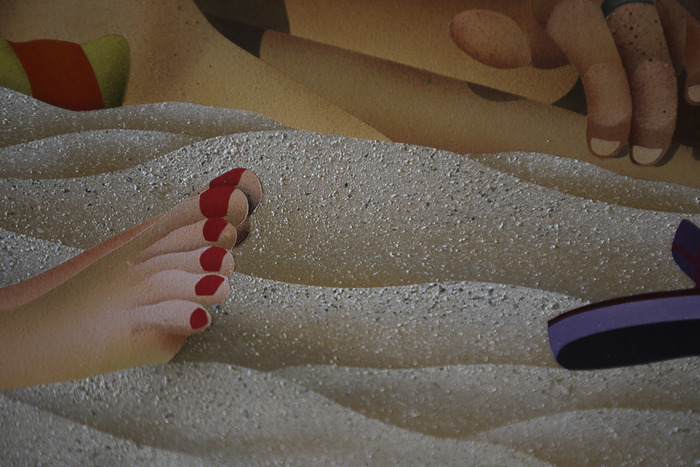 Casey has even been experimenting with taking his art to the next level by incorporating texture into the otherwise flat planes. He has done this by incorporating industrial spray cans from places like Home Depot and Lowes intended for contractors into his fine art. These new tools allow him to emit the illusion of actual sand and rocks, which can be seen in his new body of work depicting girls at the beach. Literally, the surface of the women’s bodies has sand on them, which is something I have never seen another artist do. Especially whilst still keeping in mind that the only instruments in Casey’s toolkit are caps, stencil paper, measuring tape, knives, and spray paint.

I drove 300 miles to visit Casey’s studio and it was worth every drop of gasoline spilt on the highway. To see his work in person is mind-altering – in the same way that I’m sure the tie-dyed room above his studio was for countless musicians. There is no distance too great to sacrifice a journey of seeing artworks up close and meeting their creators. 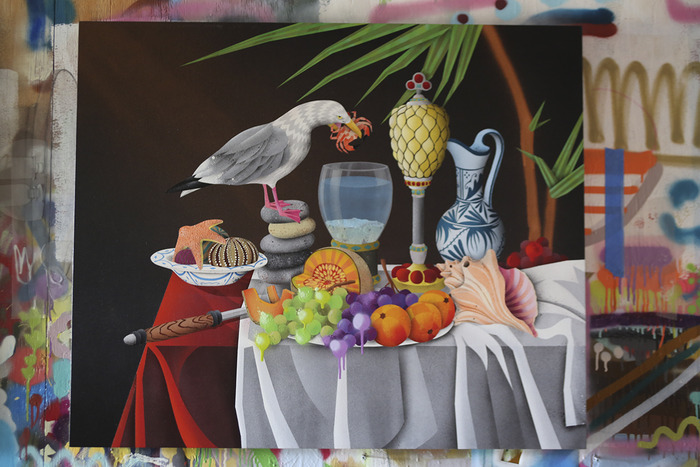 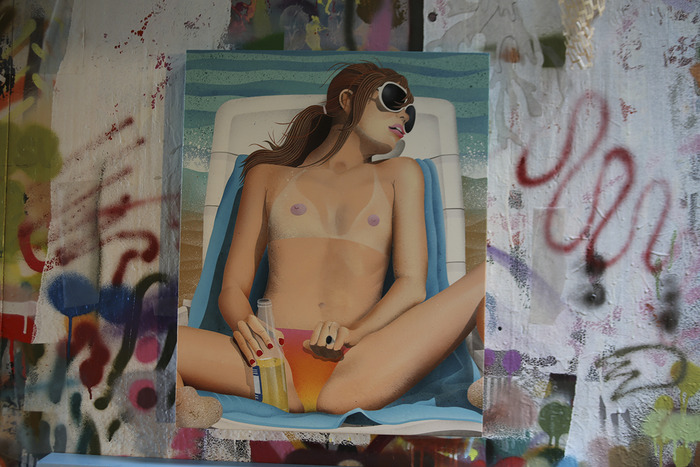 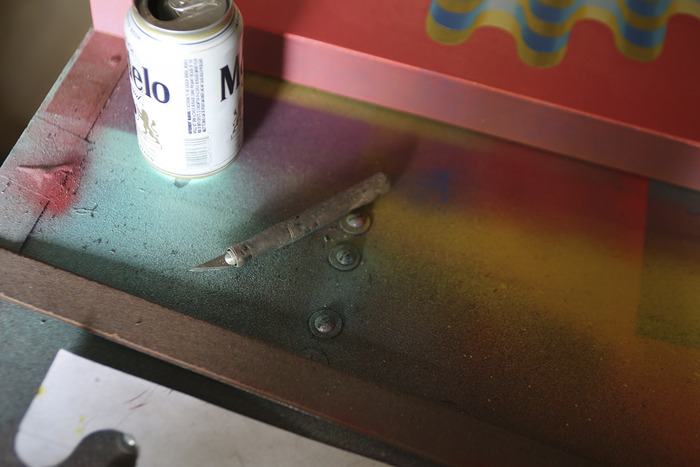 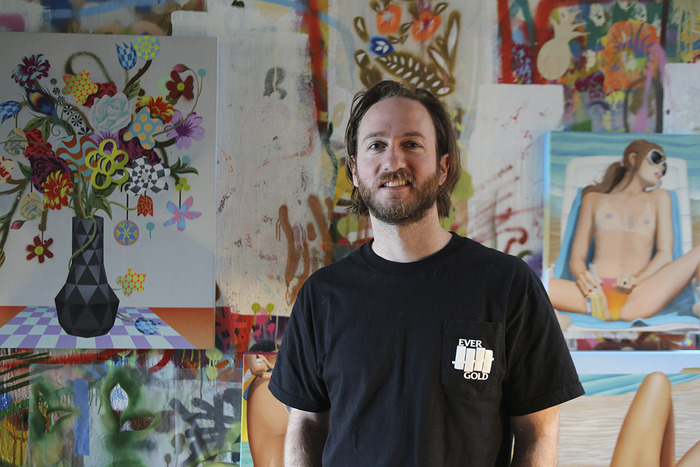 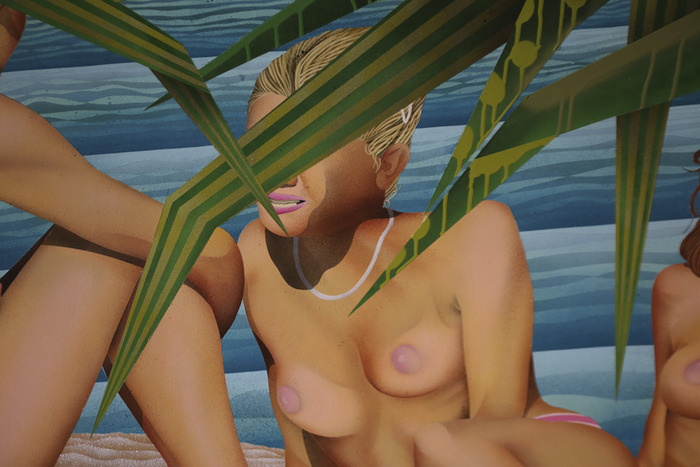 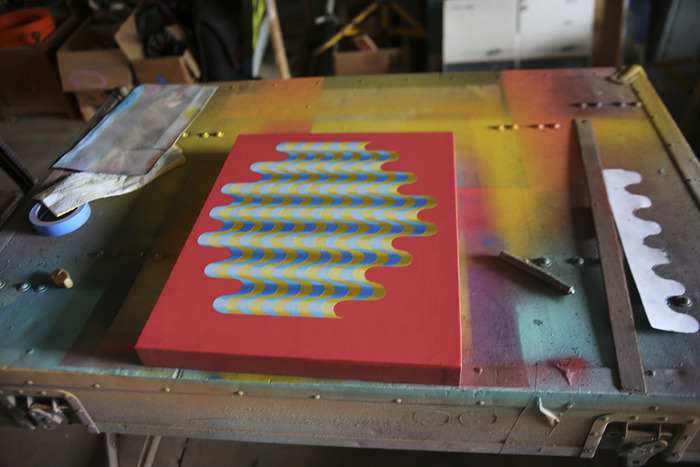 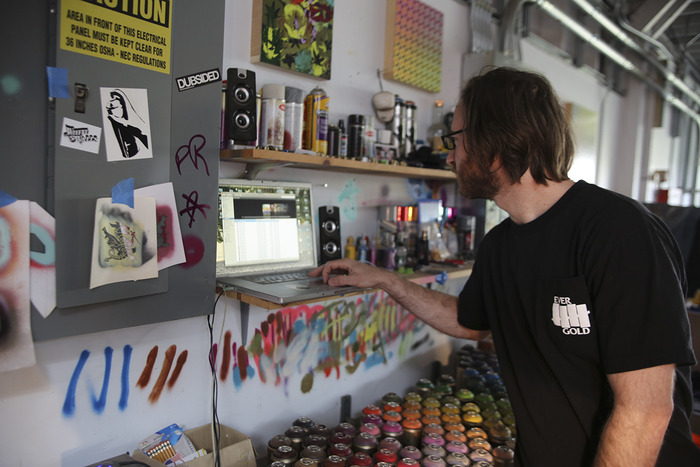 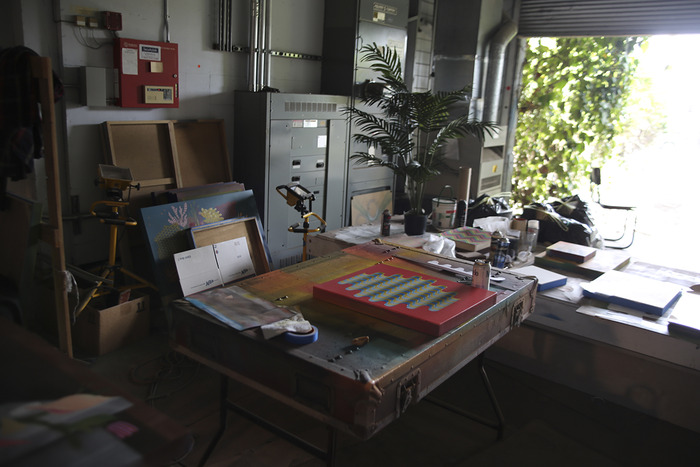 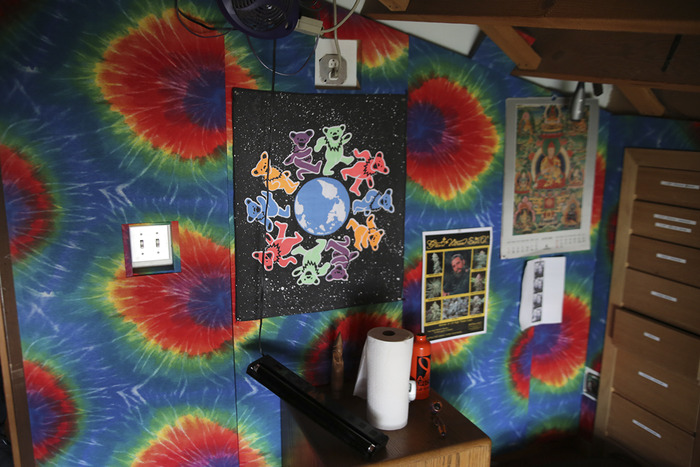 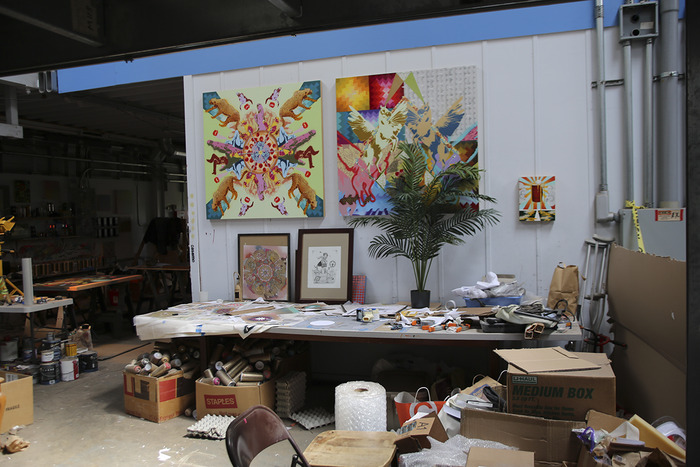 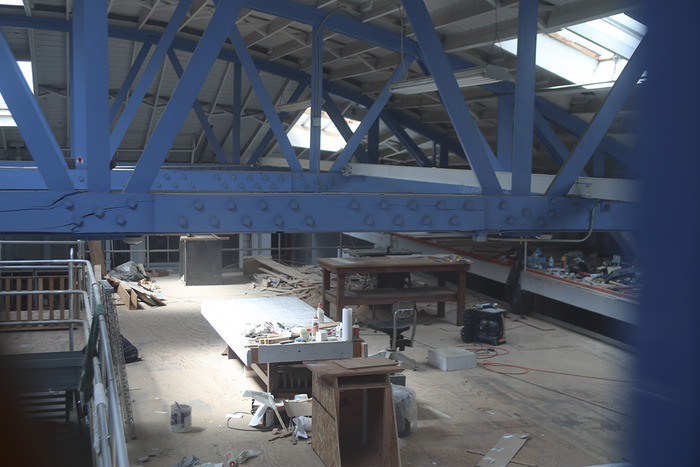 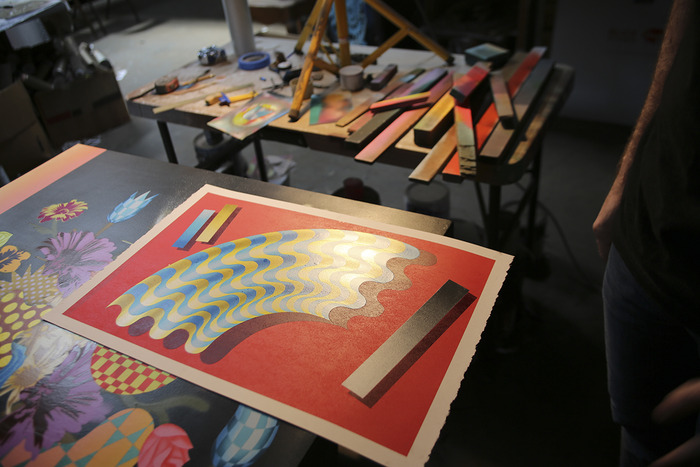 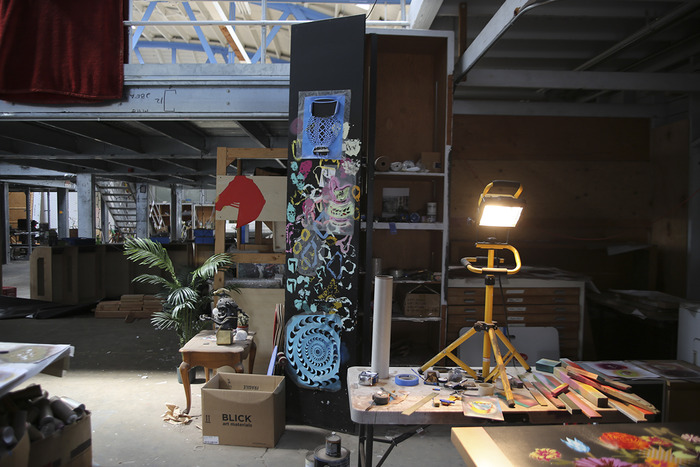 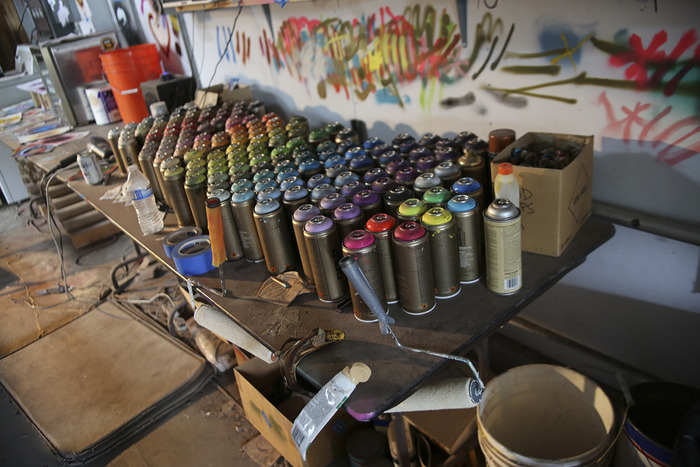 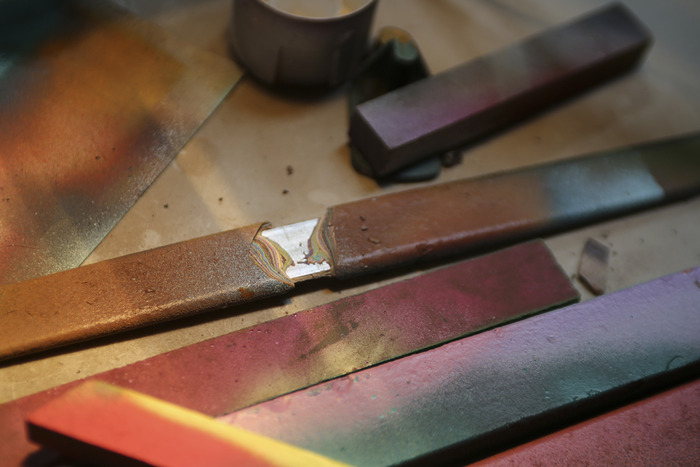 (All images: Courtesy of the author)