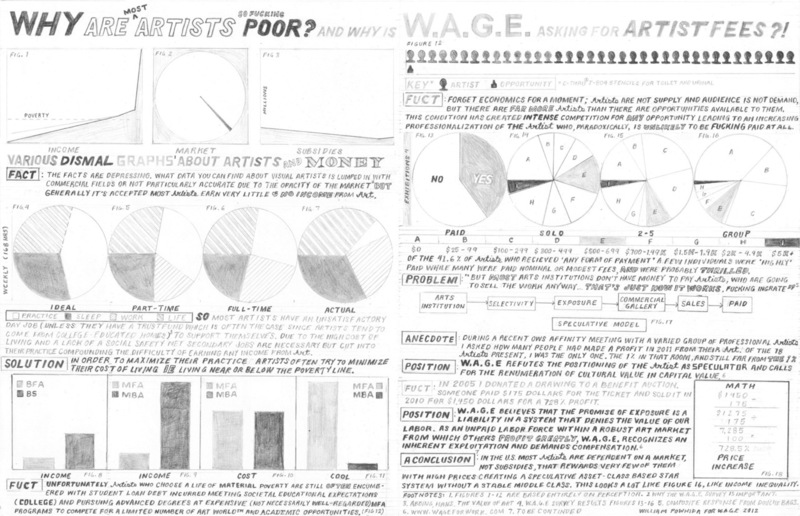 You Are Free: On Self-Exploitation in Art

“You will hear people say that poverty is the best spur to the artist. They have never felt the iron of it in their flesh. They do not know how mean it makes you. It exposes you to endless humiliation, it cuts your wings, it eats into your soul like a cancer. It is not wealth one asks for, but just enough to preserve one's dignity, to work unhampered, to be generous, frank, and independent. I pity with all my heart the artist, whether he writes or paints, who is entirely dependent for subsistence upon his art."

Philip quietly put away the various things which he had shown.

"I'm afraid that sounds as if you didn't think I had much chance."

Philip obliged himself to answer quite steadily.

"I'm very grateful to you for having taken so much trouble. I can't thank you enough."

Monsieur Foinet got up and made as if to go, but he changed his mind and, stopping, put his hand on Philip's shoulder.

"But if you were to ask me my advice, I should say: take your courage in both hands and try your luck at something else. It sounds very hard, but let me tell you this: I would give all I have in the world if someone had given me that advice when I was your age and I had taken it."

What are we doing here anyway?

We had a notion, inspiration even, a few ideas rattling around in our heads about art, mostly soft, mostly intuitive. A few dreamed of money, many romanticized poverty, others just didn’t think that hard about the economics before simply plunging in. So we went to school, because that’s what people do these days, parents and the federal loan guarantee program hardly comfortable with bankrolling bumming around Paris. So we went out and got degrees, proving to anyone we’ve been trained. Our teachers were of varying degrees of bitterly overlooked and painfully overexposed (though a few genuinely generous souls could be found there as anywhere), and we, for a price of time and money, possess the bragging rights of having hung out with these somewhat narrowly famous people, a forced acquaintanceship purchased under the aegis of education. Most of us even feel like we’ve earned something.

With degrees in hand, we even began to get some kind of recognition from our peers: a review in a mid-range art publication, a spot on the local group show cycle, maybe even gallery representation, even if we know it's not a very good one, but they’ve given a break and breaks can feel rare when you’re looking at the solid unbroken edifice of culture for far too long.

After a couple of years of regularly attending openings, making small-talk with influential people, an irregular flow of studio visits, contributions to aforementioned group shows, artist zines and the like for which one is never paid for in any direct kind of way, we began to rethink what we’re doing in economic terms: we’re investing in ourselves. We’re small business owners selling that most tricky and unstuck of all commodities, art. Not to tarnish here the optimistic, pseudo-MBA shine of the phrase “self-investment,” but it could, from a different angle, be the much less shimmery phrase of “self-exploitation.”

How much do we do for free under the idea that it’ll either pay-off later or because we “believe in it”? How much money are we paid? Can we quantify what we do in dollars? Well, that’s a tough one. Hardcore economists would of course say yes. I’m not so sure. I feel like maybe I’ve drunk the Kool-Aid.

This is perhaps about the promiscuity of artists and writers in how they accept assignments and exhibitions, sluts vs. whores, hacks and scholars, gameplaying and "gatekeepers," faux-monkish vows of poverty to follow altogether flimsy ideals that when articulated sound like redactions from Rent.

In his essay for Christoph Keller’s “Circles” exhibition at the ZKM in 2000-2001, late critic and art dealer Giovanni Intra considered selling art as not only fun (removing the stigma of crass commerce we all love to jaw about in the great unwashed classes) but also posited it as revenge against his student loans, which had mounted considerably in his getting what may be one of the most economically unuseful degrees in human history, a Masters in Art Criticism. An MFA, in the smart set and the not-so-smart set that listen closely to the smart set, means an institutional imprimatur that allows you to pass some secret barrier, and given how helpful these professionalizing degrees can be, it isn’t much a barrier all things told (though one can hope that valuable lessons were learned in its passing). In the information age, we’re especially keen to allow others to filter content, save us from drowning in too much information. What better place to start that then a high-level university taking time to parse through hundreds of applications to elect a handful of students of which only a smaller handful will ever make anything resembling the dignity of a living from their artwork? Again, what are we doing here? Are we making money, are we chasing the dream? Are we, as some posit, incapable of doing anything else but what we’re doing? Is the main bogeyman here the difficult to quantify “life-satisfaction”?

A low-level accountant makes more than most relatively famous art critics and writers (if you’ll allow me to be a little self-reflective here). But then again art critics, that precarious class, usually have other gigs; they slum as art historians, play at curating, teach, because they would like to enjoy eating regularly. Some are simply independent, and with an economic freedom that affords them to write about art for peanuts. However rare, I know a few.

Artists do all kinds of things to stay alive while they’re figuring out how to churn talent into profit, or as the painter Foinet says, to earn “just enough to preserve one's dignity, to work unhampered, to be generous, frank, and independent.” Any way you cut it, the wily survive as they always have, with mirth and ingenuity, even if, often as not, without money, plucking a living and a vision for life out of the challenges before them. Poetry soldiers on despite the dearth of income for its practitioners. I wish good poets got paid well—some do, either through the circuit of academies and prizes or the very rare (like unicorn rare) mainstream popularity, or perhaps they followed Belgian Marcel Broodthaers lead and just leapt straight to the art world where it seems there’s just a little bit more money on the ground for dreamers.

Courtesy of the Author

For me writing (as I’m not a visual artist in the professionalized paradigms of that sort of thing) is more like sex than commerce. I do have to eat and pay rent as unluckily (or luckily perhaps) there is no trust-fund bankrolling my sentimental education. Thus I never grudge any toiler their right to live. But then again, writing is fun, especially when it's done freely, without obligation or income. I’d do most everything I do for free if I could, and sometimes, a lot of times, I do. Arguably I work freely from the leisure of handling enough paid gigs as a writer and curator that I can, but that said, I’m still self-sacrificing, self-exploiting, offering others my surplus value free-and-clear. Does volunteerism become slavery only when its forcibly extracted? Perhaps I just don’t feel the need to monetize everything.

It's a joy and an honor to have a platform in which to relay to whomever cares to listen my humble ideas and experiences. It gives one a sense of pride and dignity to get paid for it. The only way through this perhaps, and I apologize, is to wend our way through personal motivations. Here’s my answer to the questions “What are we doing here? And why are we doing it for free?” Years ago, on some simple cusp of my life, I made a conscious decision that for much of my youth I would be poor. Other specific and enriching opportunities were afforded me, but I made my choice based less (perhaps shortsightedly) on money and more on what I felt I had to do and I then went about finding some way to do it. There was something larger than myself and inspiring and I wanted to find some way to contribute to it if I could, pay or no pay. Art, writing, music, kept me sane and alive, and I mean no superlative or cliché here, I might really have lost my mind or died. Because it helped me to survive, I feel some responsibility to art and have spent these last years trying to pay back that debt.

We may be going into ontological questions of the purpose of making art, or caring for and critiquing art, for a living or for a fuzzier spiritual end, or most likely both. But the old hacker slogan rings true: “Information wants to be free.” Perhaps free can be read here as “liberty” as opposed to “gratis,” but freedom is what it is and sometimes it's broke. All we want is Foinet’s dignity of a living in art, but while that living may or may not be materializing, it doesn’t mean we still don’t want to be generous and independent, even if we don’t have the money to be either. I don’t care if all that sounds like a redaction from Rent, it is as it were true. Given a few whiskeys I might get even sappier.

Though again we must return to Monsieur Foinet and his bitterness, what it means to fail and starve, or to update it a little, perhaps ’60s balladeer Lee Hazlewood from his song The Performer:

Can’t you tell by my clothes, I never made it.
Can’t you hear that my songs just won’t sing.

Can’t you see in my eyes that I hate it.
Wasting twenty long years on a dream.

Is it worth it? Hard to say. I’m wagering it is, even if it might be a waste, it might have been anyway.

If what I do is self-exploitation, at least it’s free.

[Image on top: William Powhida, "Why Are (Most) Artists (So Fucking) Poor?", Graphite on paper, 2012; Courtesy of the artist]

Why Haven’t I Given Up on the Art World?
10/8/14
COMMENTS (1)
We must cultivate our garden
Thanks Andrew
Comment by: John Sauvé on Tuesday 04/15/14 at 6:40 AM
ArtSlant has shutdown. The website is currently running in a view-only mode to allow archiving of the content.