MoMA Plans Only Female Art for 2015 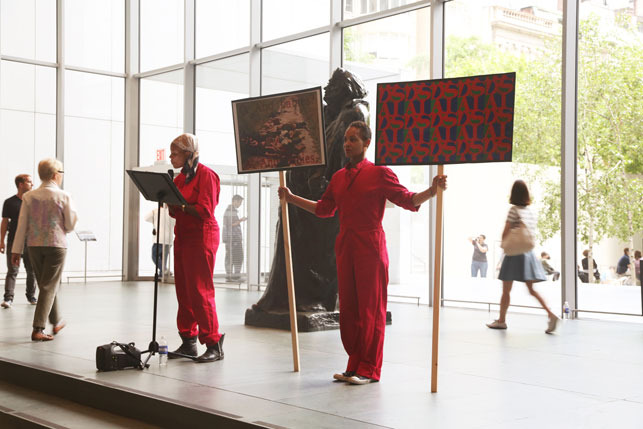 An Archive as Impetus performance in MoMA’s Agnes Gund Garden Lobby, 2013, where artist Xaviera Simmons read a list of demands, including to "erase sexism at MoMA" clearly made an impression on the Museum leadership. Photograph courtesy of Xaviera Simmons.

To mark the 30 year anniversary of the first Guerrilla Girls protest at MoMA, Director Glenn D. Lowry announced yesterday plans to give the museum over exclusively to women artists for the entire year of 2015. Ann Temkin, curator of Painting and Sculpture at MoMA, when reached for comment said, "Though devoting one year to the works of women artists will in no way make up for MoMA's historically unequal representation, we're hoping that this unprecedented gesture will be an eye-opener to institutions everywhere. This is why we're not only presenting temporary exhibitions featuring only women artists, but changing out the permanent collection as well, which has been a real challenge." MoMA's 4th and 5th floors of chronologically organized modern and contemporary works will be completely changed out to highlight the Museum's collection of women artists, which represents about 13% of their painting and sculpture departments. "Finding a way to tell the history of art through only women artists is a formidable exercise," Temkin remarked.

Major challenges will include moving José Clemente Orozco's 9 foot tall, 18 foot wide portable fresco Dive Bomber and Tank (1940), which weighs nearly 3 tons, from the 5th floor entrance, to be replaced by a more diminutive Frida Kahlo painting. Plans are in motion for a retrospective of Faith Ringgold, an exhibition of 20th century painting, including Lee Bontecou, Hilma af Klint, Lee Krasner, Agnes Martin and others, and an expansive show of female photographers from Julia Margaret Cameron to contemporary artists like Rineke Dijkstra. 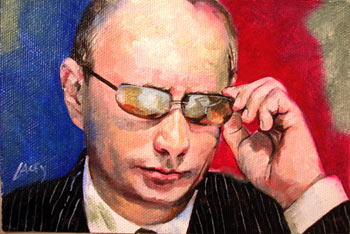 Russian President Vladimir Putin has come under severe scrutiny from the international community in recent weeks for his actions in Crimea, but it doesn't appear to have stalled him in his other pursuits. Yes, Putin is about to add another line to a long resume of skills. The multi-talented leader is already a martial arts champion, author, capable pilot, large-animal tamer, comic book superhero, skilled equestrian, fearless firefighter, whale hunter, competent archeologist, expert fisherman, and responsible Labrador Retriever owner. He can now add "master painter" to that list. Putin, who has earned such notable recognitions as Time’s Person of the Year, France’s Grand-Croix, UAE’s Order of Zayed, the Confucius Peace Prize, and Saudi Arabia’s King Abdul Aziz Award, will open his solo-show of oil paintings at St. Petersburg’s world-renowned State Hermitage Museum. The exhibition, which has over a hundred large paintings completed by the Russian head-of-state over the last two years serves as a sort of visual memoir, illustrating his life as an accomplished athlete, scholar, and politician. The incredibly detailed paintings include landmark scenes from his life including him tranquilizing a polar bear, fishing shirtless, riding a horse shirtless, discovering two ancient Greek amphorae in the Black Sea, practicing martial arts, writing a book about martial arts, co-piloting a firefighting plane to drop water on a raging forest fire, and painting his series of oil paintings. The show runs at the State Hermitage Museum until the end of the year when it will go on a world tour and then enter the State Hermitage’s Museum’s permanent collection.

Gagosian to Open Yet Another Gallery 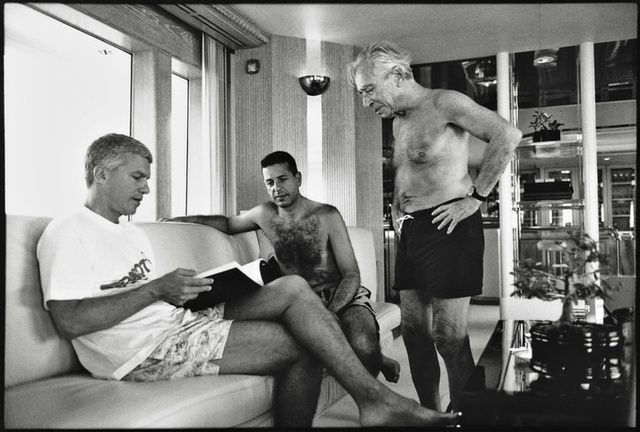 Gagosian Gallery announced plans last week to open yet another branch of the mega-gallery, this time to cater to vacationing 1-percenters. Gagosian St Barts will open this fall, the latest outpost in Larry Gagosian's contemporary art empire, which includes locations in New York, Paris, Hong Kong, Athens, London, Los Angeles, and Rome. Jerry Saltz recently pointed out that Gagosian Gallery has more square footage altogether than most museums and even entire cities' art scenes (157,500 square feet in all the permanent locations), and while this newest gallery will only count for a modest increase in total square footage, it only serves to heighten Gagosian's exclusive cachet. Gagosian has owned a home on the wealthy Caribbean island for many years, and decided, "Why not open another gallery too?" Construction has already begun on refurbishing and renovating a two story townhouse located on the far end of La Pointe in Gustavia. Programming at the new St Barts location will kick off with a sun-and-sand themed exhibition, including some new reflective Jeff Koons sculptures, Taryn Simon Birds of the West Indies prints, and Andy Warhol Polaroids from his days in Montauk, Long Island. 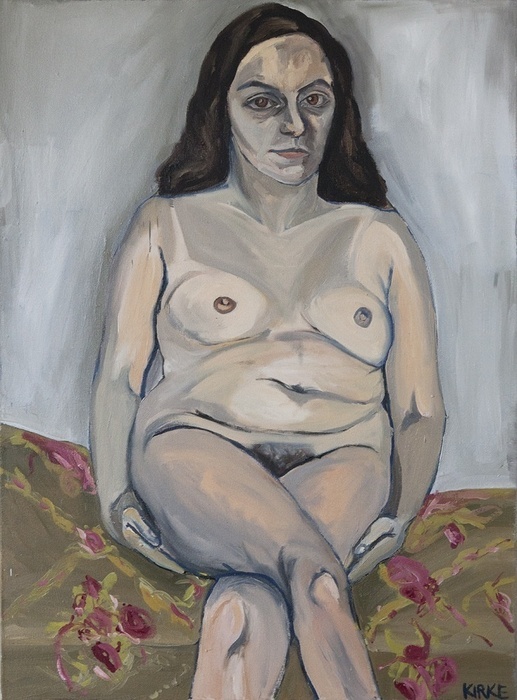 Girls star Jemima Kirke, who plays the token artsy free-spirited British girl, announced on Twitter she was leaving the show to focus on her painting. Kirke has been receiving more attention for her paintings recently, having been named one of Forbes’ "30 under 30" and opening a solo exhibition at San Francisco’s Fouladi Projects, and cited the need for more time for critical reflection with her paint brushes. Others speculate that Kirke’s abrupt leave of the wildly popular HBO series may have more to do with the direction Lena Dunham is taking the show: mainly, it’s becoming more “Girl” and less “Girls.”  The show is already so Hannah-centered and last season Dunham marginalized Jessa and the other characters' roles even further, focusing more on Hannah and Adam's careers. It’s unclear how exactly Jessa will be written out of the script, but rumors are circulating about a freak building collapse at a toast boutique / underground tattoo parlor in Williamsburg. Dunham hasn’t issued a statement about Kirke’s decision, although she also doesn’t appear to have noticed. In reply to Kirke’s tweet announcing her leave, Dunham tweeted a selfie with her and her "favorite face."

Posted by ArtSlant Team on 4/1/14
ArtSlant has shutdown. The website is currently running in a view-only mode to allow archiving of the content.